An experience that's much closer to series' survival horror roots

With the release of every new Resident Evil title comes the promise of a step back to the series’ heyday, when a sense of dread filled every corridor and players cautiously and frightfully paced forward, both curious and fearful of what horrors lay in wait. The latest console release in the series, Resident Evil 6, failed miserably in this endeavor, providing a brief and frail attempt at an eerie atmosphere before quickly evolving the gameplay into firing rockets at choppers and taking down monsters the size of buildings. The latest entry in the series, Revelations, again tries to evoke the chilling atmosphere and tense encounters that propelled the series to fame in the nineties, but does it manage to finally bring the series back to the fans or is it just another nail in the coffin for survival horror? 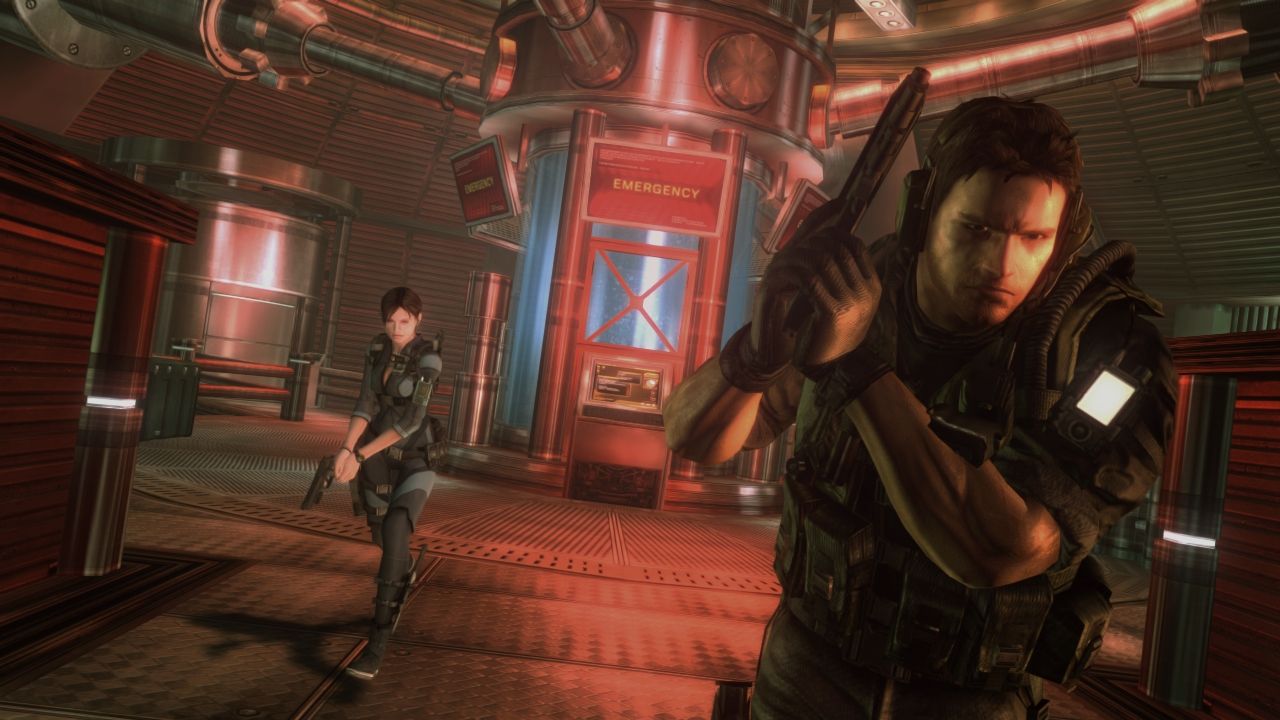 Revelations was originally a 3DS game that was released last year and has now been given an HD makeover and ported to consoles. The game stars series veterans Jill Valentine, before she decided that blondes have more fun, and the man with the biceps, Chris Redfield. It takes place between the events of Resident Evil 4 and 5; the BSAA, the anti-bioterrorist group that was introduced in the fifth game, is in its infancy and Jill along with her partner Parker are sent to investigate after Chris goes missing during a field operation. The story isn’t told as one continuous narrative, but instead frequently switches between characters giving you each group’s recap of events. There are also flashbacks where you’ll take control of Parker, backed up by Chris’s new partner Jessica, and the game even introduces two entirely new characters, Keith and Quint, that get in on the action, albeit very sporadically. The story is rife with deception, twists and intrigue and is one of the more clever narratives to grace a Resident Evil game. It’s also a narrative that doesn’t take itself too seriously with Keith and Quint seemingly existing only for comedic value and some lines from Parker that would make even Barry Burton, master of cringe-worthy one liners, proud. The story is self-contained, so even those with no prior knowledge of Resident Evil’s expansive history can enjoy the tale as much as series die-hards, making it a perfect entry point for anyone new to the series.

The majority of Revelations takes place on board the Queen Zenobia, a luxury cruise liner overrun with bio-organic abominations. It’s a huge ship, but also a tightly contained location where you’ll meet many doors and inaccessible areas, meaning there’s a lot of running to and fro through a confined setting gathering keys and items in order to progress. A map is provided for easier navigation, highlighting your waypoint and objects of interest, but you’ll still find yourself utterly disorientated from time to time and stumbling aimlessly in the wrong direction. Despite the game being set predominantly in one location, the sections of the ship offer surprising diversity, from the magnificent ballroom to dark grimy service areas. The scaled down setting over previous instalments is an obvious consequence of the game’s origin as a handheld title, but also makes it one of the best settings to grace the series in years. Its claustrophobic corridors and sprawling intricate layout make encounters intense and exploration enjoyable. The ship’s sheer size and variety means it bears a very old-school feel and is a welcome resemblance to settings like that of the mansion in the first Resident Evil. Aside from the Zenobia you’ll also occasionally explore a fairly uninspired snowy mountainside and office-building interior that serve a much better purpose propelling the narrative forward than providing compelling surroundings. 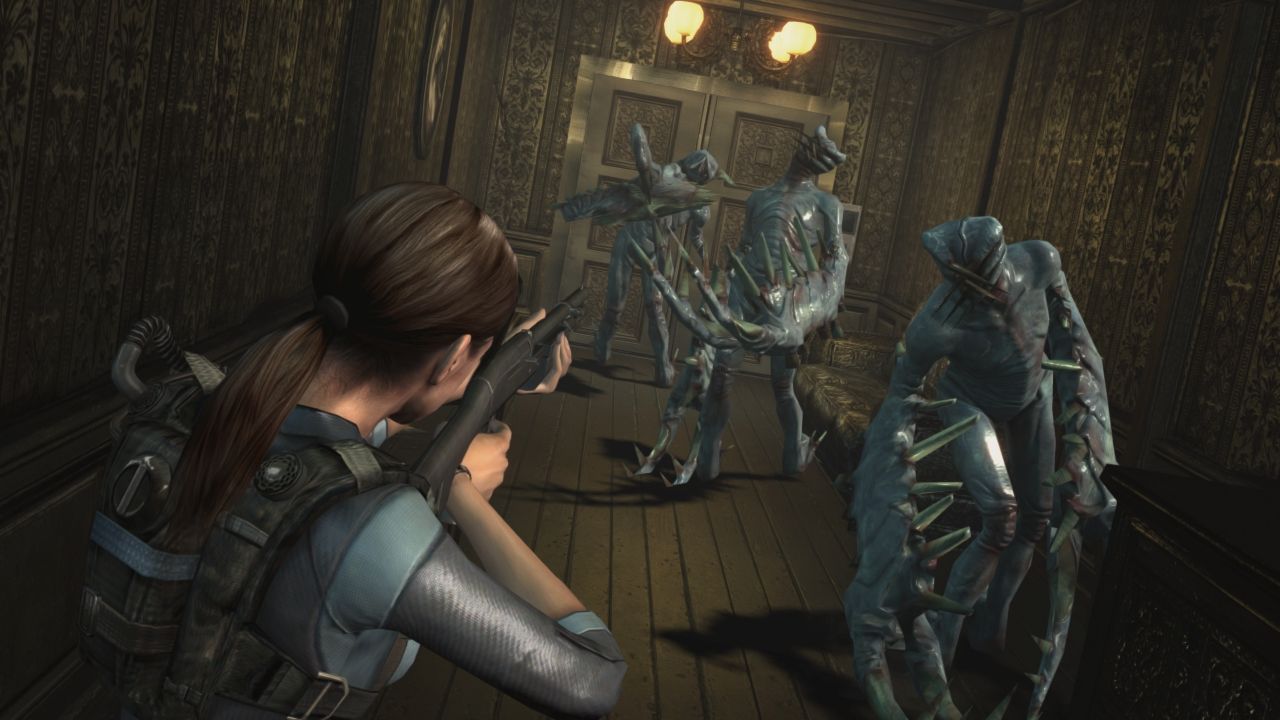 Gameplay-wise Revelations feels most like Resident Evil 4; gone are the acrobatics of newer instalments in exchange for a more restricted control system. Against the majority of enemies, and in close quarters, the clunkier controls do a splendid job of creating intense and challenging battles, but in certain instances, especially some boss fights and quick enemies, the lack of a sprint feature can make combat feel unfair and unbalanced. The game introduces yet another new enemy type to the series, with the T-Abyss virus responsible for the latest outbreak. The basic enemies bear no resemblance to the traditional zombies the series is famed for and instead look and act more like they’ve wandered out of Silent Hill. Despite the new and considerably underwhelming enemies Revelations does find other ways to make the experience feel more like a modern take on an old Resident Evil game. Foes don’t drop supplies, meaning you’ll have to make good use of whatever health and bullets you find elsewhere throughout the levels. Ammo is rather scarce at times so no matter how skilled a marksman you are there will be occasions that you’re forced to avoid the enemy rather than defeat it. Herbs are again used for healing, only green can be found this time around, but your HUD doesn’t show a life bar and health doesn’t regenerate so you’ll have to be smart about when to use those precious herbs. As well as the more scaled back controls and limited supplies Revelations also provides a few subtle nods to the original game, such as a drainable murky bathtub and wall mounted shotgun that are sure to have long-term fans awash with nostalgia.