An improved sequel with a better world, satisfying fisticuffs and tools that glue the action together

Zeno Clash 2 is a first person brawler that knocks out some of the problems that held back the original. Its predecessor, released four years ago, was appreciated for absurdity and focus on fist fights. It failed to reach its potential due to cramped environments and repetitive combat scenarios. The developers, ACE Team, have followed up with a sequel that unleashes a larger world, empowering players to traverse it in a non linear fashion. New tools bring alternations to combat structure and help eliminate frustration. Zeno Clash 2 continues from the first game with many locations and characters returning.

Players reprise their role as Ghat, a human-like male living in Zenozoik. In the first game, Ghat left his family after he discovered he was kidnapped by his parental figure, FatherMother. Ghat and many others were taken from their parents and raised by FatherMother as her own. At the conclusion of the original, he bested his kidnapper in a fight and liberated his family with the help of a Golem. This sequel begins with FatherMother incarcerated and Ghat’s siblings scattered throughout the land. Ghat’s sister, Rimat, wants to free FatherMother and needs your help to succeed. 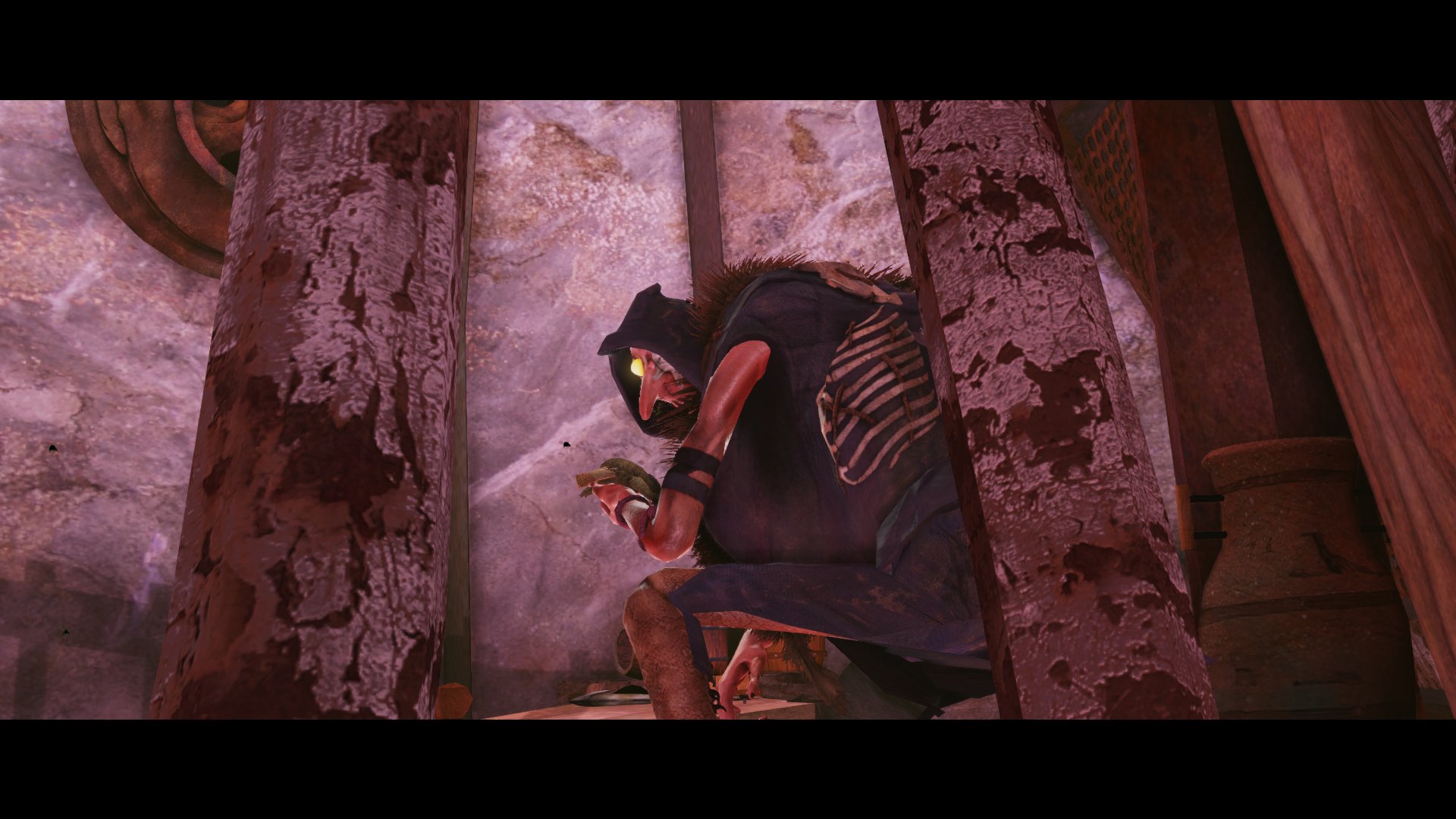 FatherMother is one creepy jailbird

It is difficult to follow the story in this sequel and not because you are helping a creepy beast that kidnapped you. Characters use broken sentences and the story pushes you from one fight to the next with little justification. ZC2 tries to overcome some contextual issues by bringing Golems to the forefront. Golems are wardens of Zenozoik that remain secluded from its inhabitants. Just like the player, Golems believe the Zenos are primitive beings that do little more than punch each other. Ghat encountered the North Golem in the original and he will cross paths with one Golem for each point on the compass. You spend much of the adventure in search of your siblings. These brothers and sisters will be reluctant to follow you, but your fists are powerful negotiators.

Finding your siblings is as easy as following arrows on your minimal HUD. You often need to beat up bad guys, or parents, to earn your sibling’s alliance. After recruiting these characters, they disappear from the world until they are needed for specific fights. During such fights, your recruits may distract enemies or run off and attack harmless animals. They might accidentally kick you in the face while you attempt a difficult combo move. Despite this, your allies are still useful and heal quickly between battles. The majority of fights do not involve allies, so you will need to survive in Zenozoik on your own.

The land of Zenozik consists several areas (levels) connected together. There are many familiar locations that have been reinvigorated with Unreal Engine 3. The Corwid Woods return and the Outskirts will be familiar to those that remember the twisted tree stumps. The township of Halstedom is alive with creatures and several interiors. Areas are connected in a linear fashion, but there is room to stray from the direct path. Fast travel warps you from one discovered waypoint to the next. Creatures respawn in areas, so you’ll never run out of things to punch. The levels are more expansive than the original and this pays off when backtracking. 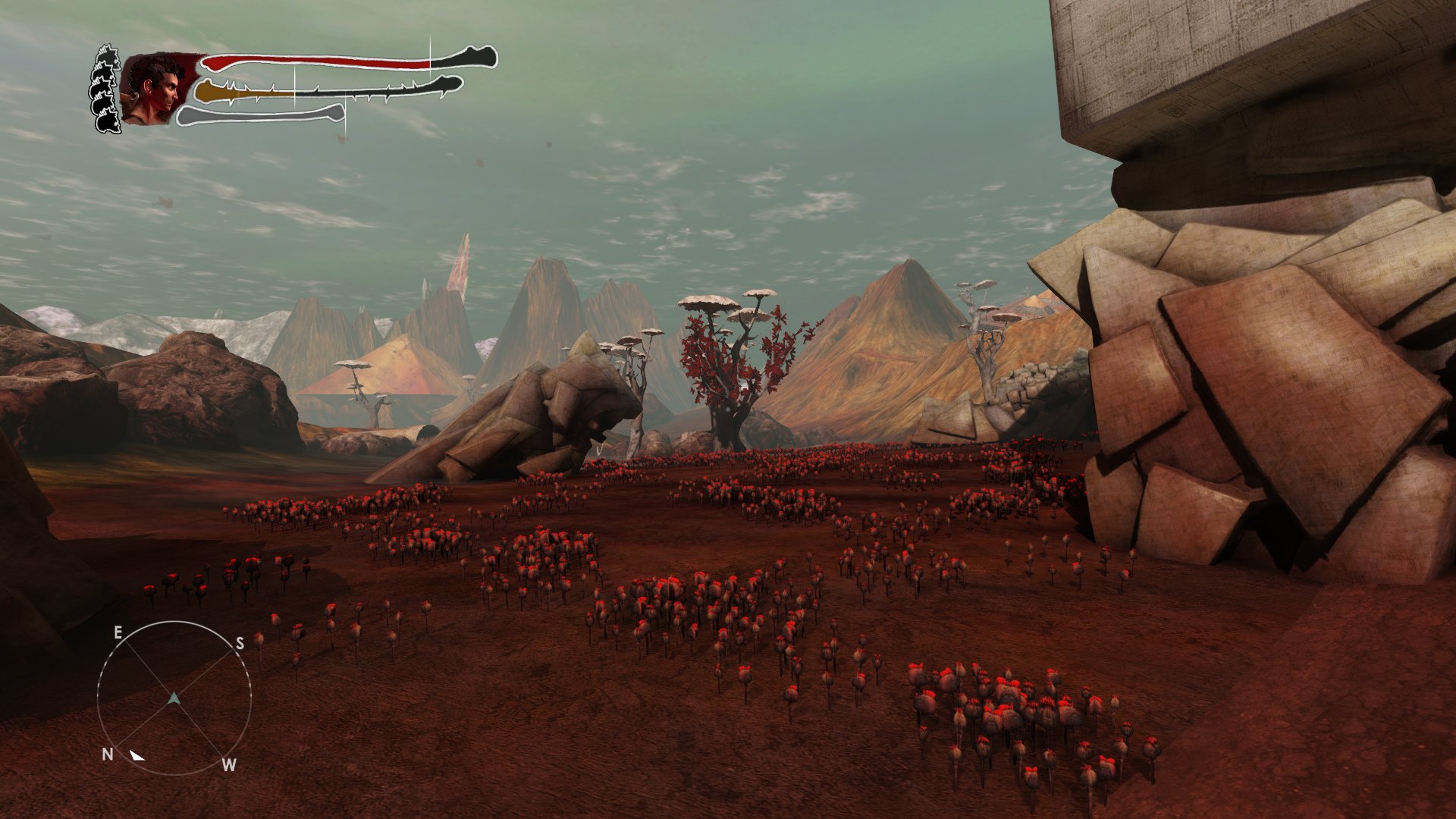 Screens may not do the game justice, but this still looks nice

ACE Team have made Zenozoik feel like a real place. Many of the plants are three dimensional, instead of two dimensional sprites in the Source-powered original. The road to the Corwid woods is the best example of this; twisted plants have volume and cast appropriate shadows. The End of the World is astounding with contorted stone creatures shambling through fog as aurora lights flicker under your feet. The day-night cycle also makes the world feel alive. Shadows drift across the landscape and areas take on a different mood when the Sun goes down. Because of the dynamic world, screenshots don’t do the game justice. The world is a labor of love and Zenozoik feels like a place the artists may have first envisaged.

Zeno Clash 2 is all about fist fights, but without the frustration of the first game. You fight gangs in open areas and special tools make these fights satisfying. The action is less punishing if you forget to block or miscue combinations. You can effectively whittle away most opponents with left and right punches. If you block an attack at just the right time, you can retaliate with enough power to knock them off a cliff. Fist fights are more about positioning than pulling off the perfect attack combination.

Fighting typically occurs in areas that give you plenty of room to manoeuvre. You can run for minutes as enemies slowly trail after you. It is rare to be backed into a corner, unable to move, until you dispose of enemies trapping you. Even the windy roads along cliff faces allow you to bypass groups without getting stuck on the receiving end of consecutive punches. The combat structure allows the player to engage at a time of their choosing, instead of being forced into action like the original. Because of this, impatience is the biggest threat to your own survival. 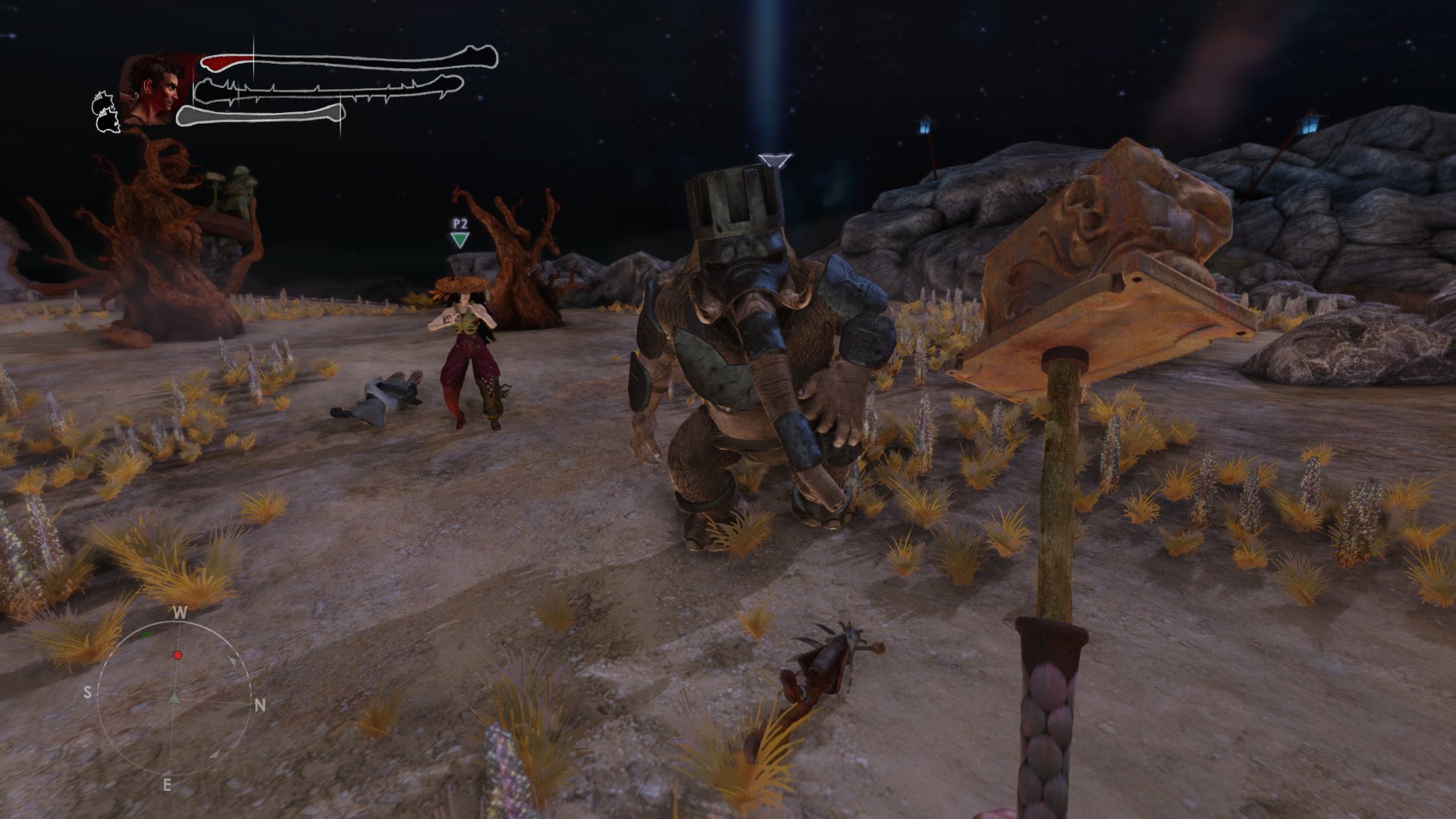 Zeno Clash 2: The only legal way to beat an Elephant with a mallet

The traditional shooting weapons return and this includes a grenade launcher, shotgun and pistol. They operate much like the original, which unfortunately means rather clumsily. It is more satisfying to throw guns instead of shooting them. Projectile weapons will break and you also lose the precious ammo contained within. Guns should be taken when you come across them, but are wasted against the lesser creatures. Open areas favour guns more than the original because weapons are not knocked from your hands frequently. Zeno Clash 2 is not a shooter though, as most of the action involves your fists or the new tools.

All videos for Zeno Clash 2 (1)
Advertisement ▼