An improved sequel with a better world, satisfying fisticuffs and tools that glue the action together

The biggest improvement to the combat comes via the four tools you have access to. Skull bombs return and, although they explode with force, enemies are excellent at avoiding them. You can carry five bombs and they prove useful against fallen enemies. The second tool you acquire is a melee chain that unleashes a satisfying whipping sound as you swing it in front of you. It can fend off groups as you chip away at their health. It can also remove wooden shields from enemies who resist punches. The swinging action consumes a chunk of stamina, energy needed to block attacks or sprint, but stamina recharges so quickly that you can use the chain frequently.

The third tool, the Sun-moon Gauntlet, takes the energy from the sun or moon and brings it to the battle. Once you locate the moon or sun in the sky, you point the gauntlet at the light source and bring forth consecutive explosions. Corralling enemies into a conga line, or chokepoint, will yield the most damage. It can obliterate groups of enemies and has a reasonable cool down timer. The trickiest part is finding the moving light source or being in the best position to use it. During one canyon mission, the chain whip held enemies at bay until the Sun rose over horizon so the Gauntlet could finish them off. 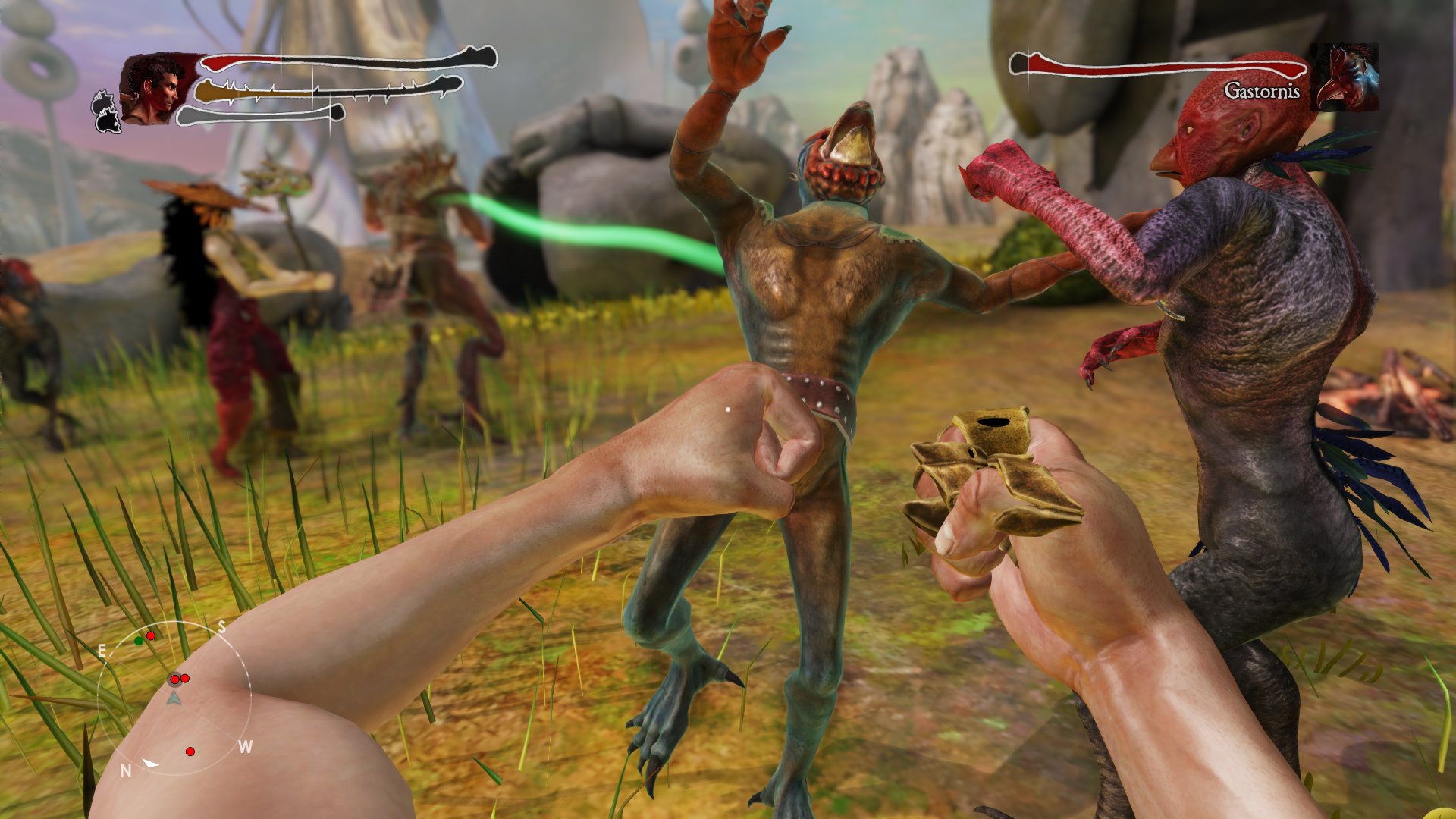 Punching linked enemies is the definition of doubling your return

The Gauntlet is bested only by the fourth and final tool; the Golem Hand. The Golem Hand is worn on your fingers and creates a link between two objects or creatures. It mirrors any physical force done to either of the linked objects. It is incredibly satisfying to see one enemy fly backwards when you pummel on his linked friend. If you are the sneaky type, you can link a tough opponent with a less dangerous creature and beat on the weaker foe. Better yet, linking enemies effectively doubles your ammunition cache for those rare weapons. Each of these tools is useful for different reasons and you will alternate between all during battles.

Mission variety is still a problem for this sequel when almost every objective leads into a fist fight. There are not enough puzzles or twists on the standard structure. Strange characters appear out of nowhere to initiate a scripted fight that might not fit in the context of the story. It is disappointing that many siblings need to be throttled before they decide to help you. Treasure hunt quests, or deeper puzzles, could have broken the monotony. The most interesting side objective was searching for eight cubes spread around Zenozoik. If the mission variety was as good as the environmental variety, this sequel would have elevated itself into another tier.

If you prefer to fight with others, there is a functional two player co-op mode. The second player fills the role of Rimat and follows Ghat around Zenozoik. There are latency delays if you play as Rimat (client) and this makes combos hard to execute. You can hurt each other during heavy battles, but it’s safer to divide and conquer. If you suffer fatal damage, you briefly enter a kneeling state and enemies switch focus to your partner. Take enough damage again and you must reload the last checkpoint. You gain full health after death, a blessing in the limited heath environments. Enemies have more health in co-op but progression flows because there is twice the offensive power. It is nearly impossible to find a random game, so don’t consider co-op an option unless you have a buddy on hand. Co-op is a good addition because joining forces is better than fighting alone with AI allies. 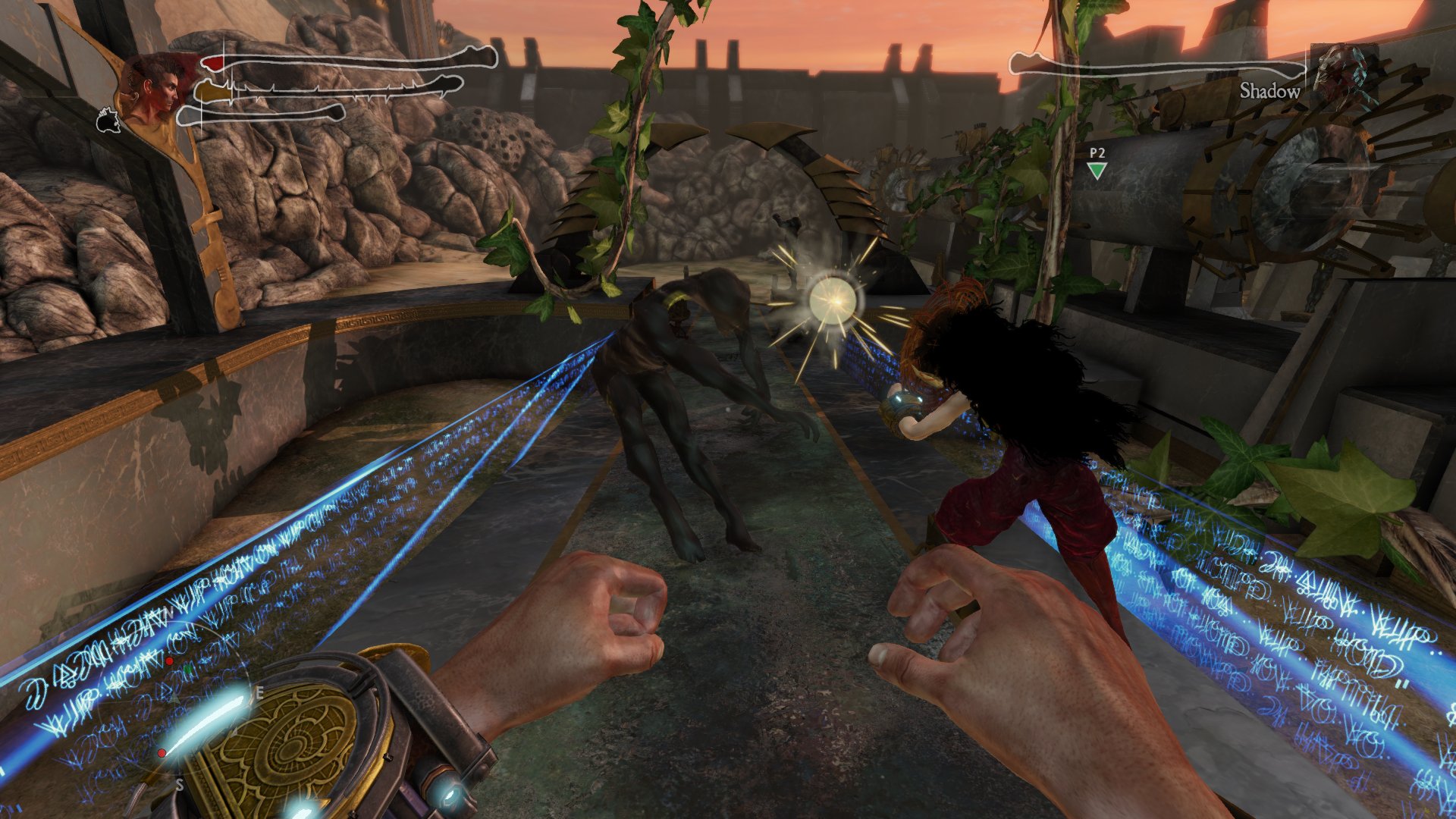 Zeno Clash 2 is an improved sequel but not a flawless one. Zenozoik finally feels like what may have been envisioned. Combat is more enjoyable because it’s lenient and situated in open areas. Sadly, the combat structure repeats with little or no explanation for some arena style fights. New tools breathe life into the melee encounters, as they encourage you to step back from the action and use different tactics. Co-op is a solid complementary feature although it is difficult to find a game in progress. ACE Team have spent four years crafting a fist-fight adventure that bests the original. Zeno Clash 2 unlocks the potential of Zenozoik and stands strong as a brawler with refined action mechanics.

Prev12
Our ratings for Zeno Clash 2 on PC out of 100 (Ratings FAQ)
Presentation
80
Utilizes the Unreal Engine 3 wonderfully, and has a full day-night cycle. The environments are detailed with three dimensional objects although texture resolution could be better. Creature design is good and animations are synced well with fights. Large areas can produce excellent panoramas.
Gameplay
74
Fist fights are less frustrating than the original and the new tools are brilliant for the action. You are free to engage enemies on your terms. Knocking enemies off cliffs or deploying combinations is satisfying.
Single Player
65
Difficult story to decipher, perhaps partly due to translation or nonsensical nature. The mission objectives fall under one category: fist fights. More puzzles and improved exploration would have greatly enhanced the eight hour adventure.
Multiplayer
73
Co-op mode is not always smooth for the second player and enemies absorb more punches. Joining together in battle is still better than playing with AI allies. It is difficult to find games, so don�t expect co-op to function unless you have a buddy ready to play.
Performance
(Show PC Specs)
CPU: Intel i5 3570k
GPU: Gigabyte 7950 OC 3GB
RAM: 8GB DDR3
OS: Windows 7 Ultimate 64-bit

72
Most of the areas run well with extremely fast load times. Corwid woods and similar looking areas produce framerate drops and stuttering. Action is never particularly fast so the drops are not a big issue for gameplay.
Overall
75
Zeno Clash 2 is a clear improvement over its predecessor. The world of Zenozoik can be fully appreciated for the first time. The open levels suit the action better and the world feels alive. Mission variety is poor but the combat is well realised with excellent tools.

All videos for Zeno Clash 2 (1)
Advertisement ▼