A game not worth anyone's time or money

It is generally said that you shouldn’t judge a book by its cover, a school of thought that should be encouraged in all forms of media, whether it be books or video games. And yet even the most open-minded of individuals should not argue that the latest XBLA remake of Double Dragon II does not look like a game worth anyone’s time or money, except perhaps for the morbidly curious and/or masochistic.

While there have been numerous ports and remakes of Double Dragon games in the past, including the recent Double Dragon Neon, the developers behind this latest version of the 2nd Double Dragon game have not had prior dealings with the two-player beat-em-up franchise, nor should they ever have had any business adapting the game to begin with; a South Korean developer known for their PC MMORPG series Ragnarok Online, game studio GRAVITY is responsible for this atrocity that has infested the Xbox Live Arcade marketplace on our collective nostalgia in the form of Double Dragon II: Wander of the Dragons. 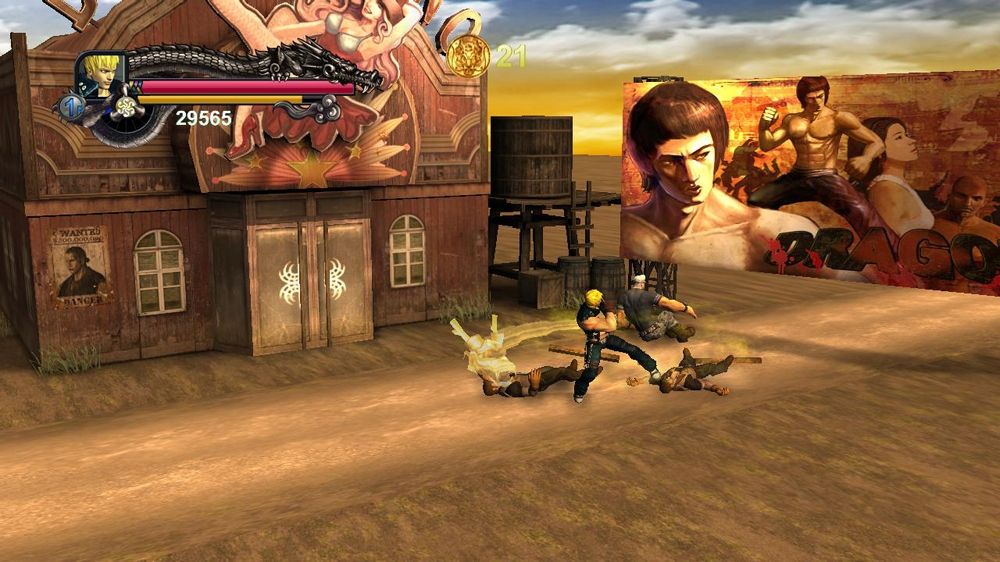 The plot of Wander is the only real link it shares with the original game, minus a few unnecessary changes: instead of an innocent civilian gunned down in the street, Marian has been retconned as the martial arts instructor of Double Dragon’s heroes Billy Lee (her boyfriend) and Jimmy Lee (his brother). Or at least that’s the most that could be ascertained from the incoherent English that runs rampant in the story (both in the text as well as the voice acting). After fending off an intrusion of thugs in the painfully long tutorial level, Marian is then tragically gunned down by Willy, leader of the Black Warriors and the only thug in the whole gang to carry a firearm.

“Tragically” may be an exaggeration, as are the numerous cutscenes that hamper on the subject of Marian’s death; while the original game was innovative with its controversial murder of the main hero’s girlfriend at a time when fictional character deaths were uncommon in videogames (even the NES version did not skimp on this detail), Wander of the Dragons force-feeds you with endless sequences that make the subtle character death feel cheap and exploitative. Though the comic book-style sequences are decently drawn, they constantly drag on by showing Marian’s death over and over, Billy’s distraught rage over losing her (again played out with hilariously awful voice acting), and other eye-rolling sequences such as remembering the time he bought her a necklace or recovering her stolen cell-phone (with a bullet hole right on the screen showing another photo of the couple). It’s only made sillier when Marian is shown wearing multiple outfits, with every single one of them featuring a prominent cleavage-window. 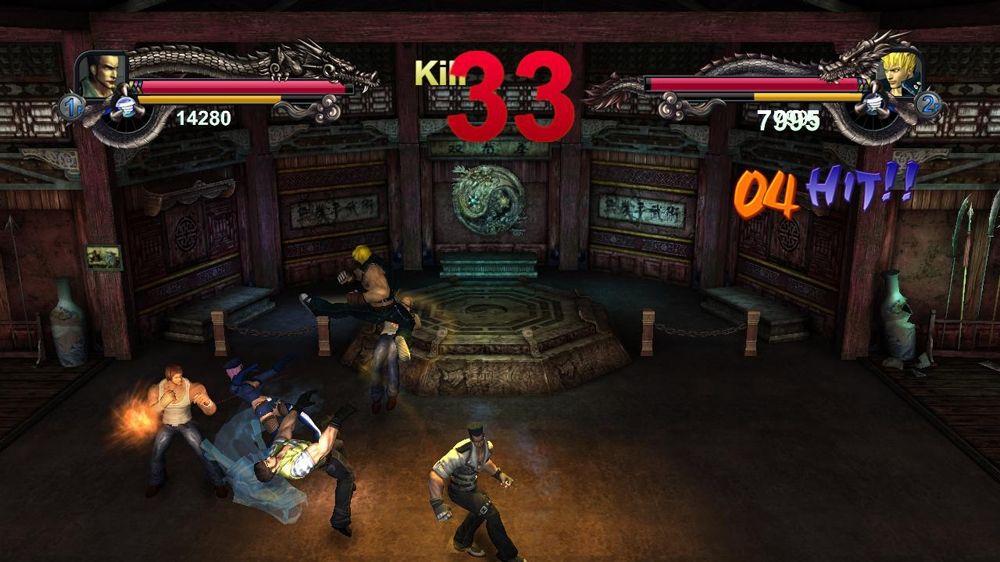 As for the game itself…look up any preview video on YouTube and see for yourself. If you require further convincing, know that the actual game does not fare any better. An ugly graphical mess with stuttering framerate issues and disproportioned characters with tiny heads and gigantic arms, one would wonder if Wander of the Dragons was intentionally made to resemble a low budget polygonal homage to the Playstation 1 just as its predecessor Neon was a respectable-looking homage to the 80’s era of videogames. Unfortunately, the game would not look acceptable in any era, and its controls are almost just as bad.

On the one hand, the remake introduces many more combos and evasive maneuvers than the original version ever had, such as blocking, back-flipping, heavy punches and kicks as well as enemy-clearing special moves. The manner in which these new controls handle are neither satisfying nor intuitive; for one thing, the heavy attacks can only be executed at the end of a basic combo string (such as hitting the punch button a few times followed by holding down the right trigger and hitting the button once more), yet most enemies will be knocked onto the floor before you can even hit them with the decisive blow. A timed block will also open up the opportunity to parry an attack, but most enemies completely stop in their tracks whenever players hold down the block button. The game also introduces a stamina gauge for these attacks, but fills up so incredibly quickly that it only proves as a visual distraction rather than a hindrance, as it has never reached a point where you could not perform the move you wanted. 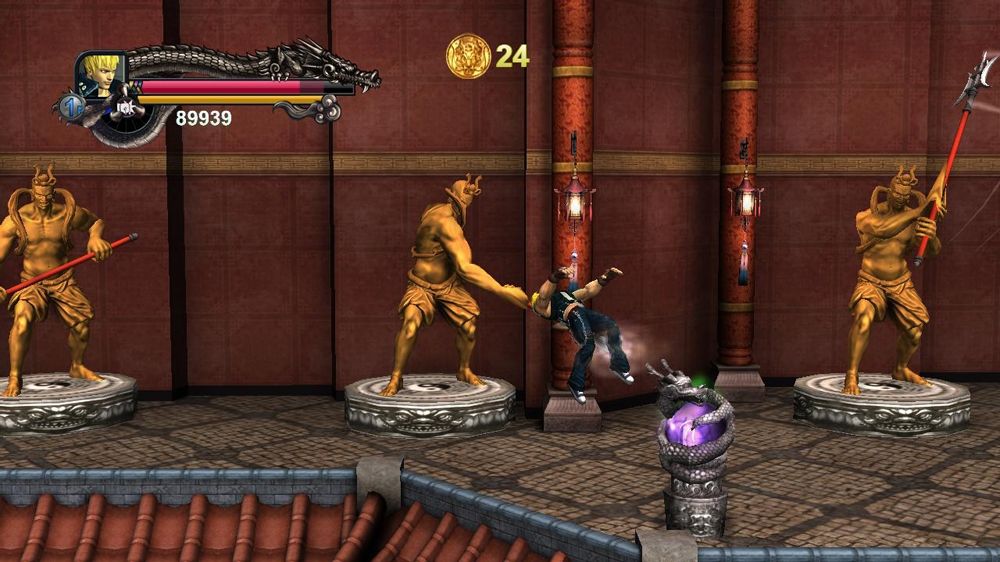 The AI is as equally mindless as the button-mashing combos. Their two strategies are either to relentlessly punch players or inexplicably run away from them. The latter is especially annoying when they veer off into the borders of the screen, appearing like they could be physically attacked but with the player unable to make contact until they decide to run back within punching distance. Bosses are also a dull affair, their one advantage being the ability to deplete your health in just two or three blows. As the game gives you a plentiful amount of credits, this is more of a momentary annoyance than an actual challenge. There are also the occasional weapons to pick up, but the animation to kneel down and retrieve them is so slow it’s better to just stick to your fists and feet.

There is not much more to say about Double Dragon II: Wander of the Dragons. It is too bad of a game to enjoy ironically, and too forgettable to recall with any sort of disreputable reverence. There may be some amusement in purchasing the game if you are the type to create witty Let’s Plays of awful games, but the real tragedy of Wander’s existence is that it prevented the more talented developer behind Double Dragon Neon to create a Double Dragon II remake using the same charming aesthetic. The fact that many talented developers require Kickstarter in order to get their games produced while Microsoft certified this insult of a game is truly baffling.

Our ratings for Double Dragon II on Xbox 360 out of 100 (Ratings FAQ)
Presentation
25
Some of the comic book cutscenes are decent, but a shaky camera and ham-fisted exploitation hamper whatever artistic talent was hidden within.
Gameplay
10
Clunky, repetitive, and utterly boring. Don’t even bother hoping to achieve any satisfying attacks, because the enemy AI is too stupid for the gameplay to flow at all.
Single Player
15
A short experience that feels three times as long due to all of the above.
Multiplayer
NR
No online multiplayer, but it wasn’t like you would be able to find anyone to play this with anyway.
Performance
5
Terrible visuals, a stuttering framerate, and an audio soundtrack that loops every ten seconds. The English voice acting may offer some amusement, but there is very little of that to begin with.
Overall
15
The story behind this game’s creation may prove more interesting than the game itself. Unless you are confident in your heckling skills of a bad game, avoid this defamation of a classic sequel and hope that there’s still a chance for Double Dragon Neon II. 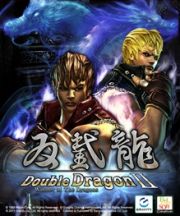