Sacred Citadel is a 2D side-scrolling beat ‘em up from developer SouthEnd Interactive. The game is a blend of basic old style gameplay with the stunning visuals of modern games that results in simply executed yet beautifully fast paced and frantic combat.

Players have a choice of four characters to play as, each with their own unique secondary abilities and special power attacks. The Ranger uses a bow to quickly fire shots that whittle down enemies, while the Warrior relies on strong melee attacks and the Shaman and Mage both utilize ranged magic. The character you choose provides a little variety to the gameplay, but doesn’t drastically change the overall feel of the game. Regardless of character you’ll still use the same basic melee weapons and attacks, and implement the same tactic of beating everything that moves to a bloody pulp. Fluid combat and responsive controls make it an entertaining and enjoyable brawler, but one that does get repetitive due to its lack of diversity.

Defeating enemies grants you experience points to level up your character, and reaching a new level lets you add points to increase your stats. There are only four areas that allow for advancement meaning it’s an uncomplicated RPG system, but one that does add a nice sense of progression to the proceedings. As you level up you also unlock new moves, however there is only a minuscule amount of new moves and these are extremely basic. A fuller roster of unlockables resulting in a complex combo system would have added refreshing variety and depth to the rudimentary battle system. So while the game doesn’t have the depth to sustain long-term play, for instant mindless entertainment it a worthy choice. 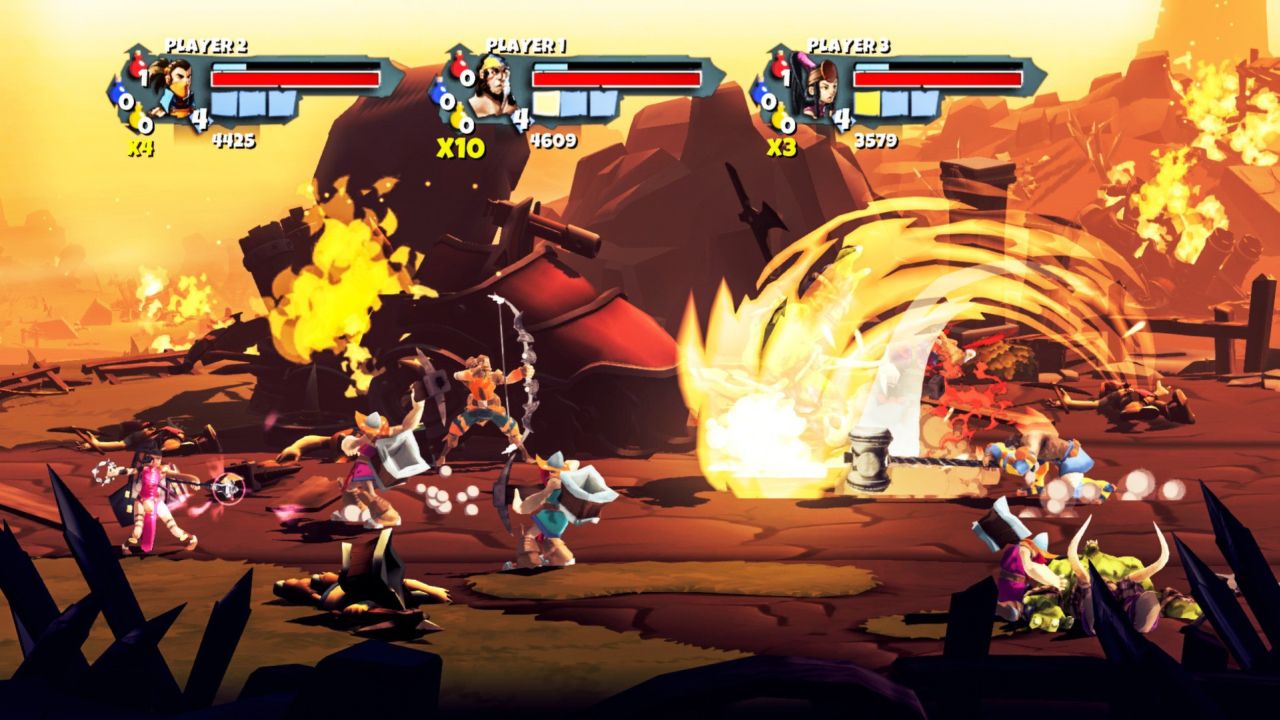 In a game that essentially consists of battling waves of enemies before moving to the next screen to battle yet more waves of enemies, there has been an effort made to make the gameplay more versatile. New enemies are introduced frequently, each with their own attacks and abilities, such as foes that can fire projectiles, block your attacks and even become momentarily invincible in the later stages of the game. Traps are also littered throughout, like mine carts and swinging logs, providing you with creative ways to dispose of foes. As well as adding variety, traps are every bit as likely to injure you as an opponent making them an added test of your nimbleness and reaction times. Occasionally players get the opportunity to mount large creatures that can deal large damage to foes; unfortunately, this is one instance where the gameplay feels clumsy. Getting aboard usually consists of jumping aimlessly around the creature, and one swipe while you are in control of it can knock you off making it considerably more efficient to slay foes on foot.

It may be a decidedly old-school experience, but Sacred Citadel doesn’t provide the same challenge as classic beat ‘em ups, instead it’s a game that is altogether too easy. With the exception of a few powerful bosses, you’ll hack and slash your way through waves of enemies without much trouble. There are no consequences, even if you do find yourself on the receiving end of too many enemy blows as you’re simply put back to the start of your last enemy encounter. Being forced back to the start of the level if you fail, or the option to replay the game on a higher difficulty setting, would have added the much needed sense of challenge the game sorely lacks.

Between chapters you’re given the opportunity for a shopping spree with the gold you’ve collected from fallen foes. The towns offer a variety of equipment to purchase, but they are usually ridiculously expensive and the best items are found in the game itself, so money isn’t an overly essential addition to the game. All the items available can also be gathered from defeated enemies, so shops only become useful if you find yourself in desperate need of extra health items or potions to fill your power attack meter. 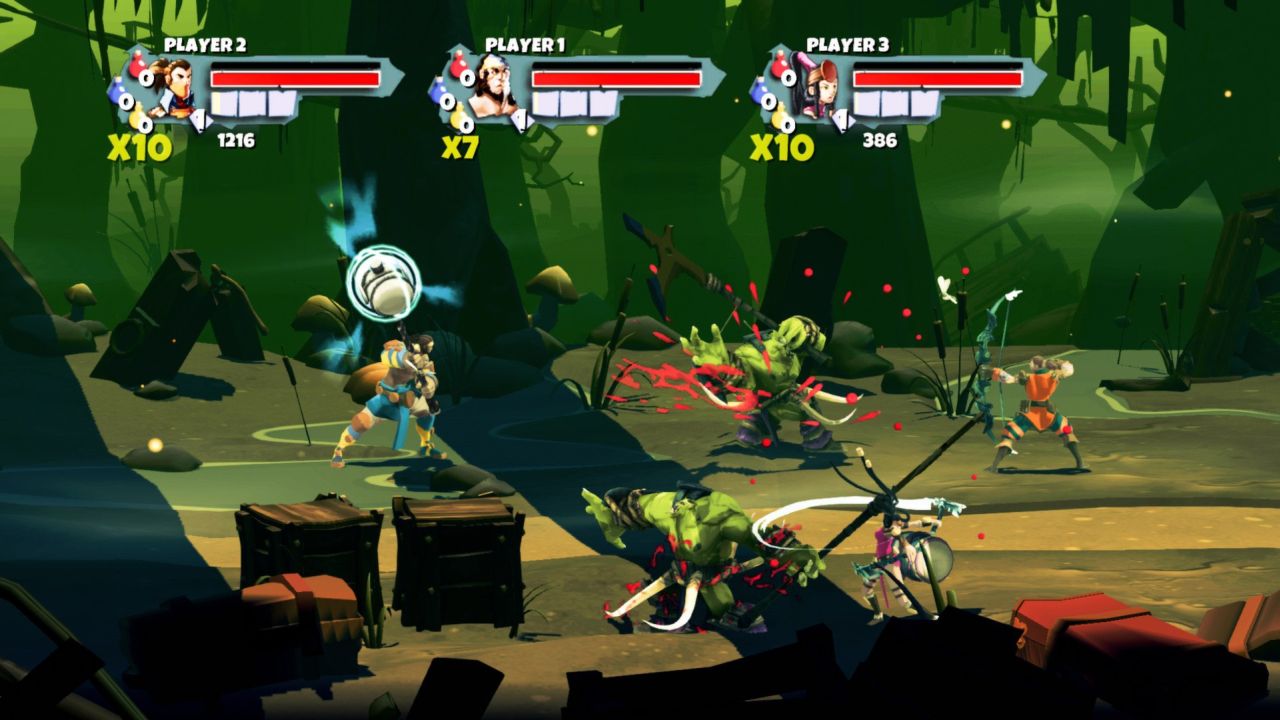 Despite the lack of challenge, developer SouthEnd Interactive has added some incentives to entice you to return to the world of Arcania. After each level you are scored on how you performed and rewarded with a gold, silver or bronze medal encouraging you to tackle levels again with your levelled up characters if you want the top prize. There are also three challenges to complete in every level, where you must complete the level without dying, within a certain time or getting above a certain score. Each level takes no more than a mere 10 minutes to complete, so these do add some replay value to what is an incredibly short and easy game.

Sacred Citadel is a real treat for the eyes with the bright cartoonish graphics reminiscent of old-school beat ‘em ups redesigned with modern technology. Level design is simplistic and varied from lush green forests to snowy hilltops, and the character design is clear and crisp. There has been some attempt to string a story together, but aside from the brilliant voice acting, it's mundane and bland. The mute heroes set off to thwart the plans of the evil villains in a narrative that feels entirely tacked on and is instantly forgettable. It doesn’t delve into sweeping narratives, character development or emotional engagement, with what thin wisp of a story it does provide existing solely as an excuse to move you from one level to the next. 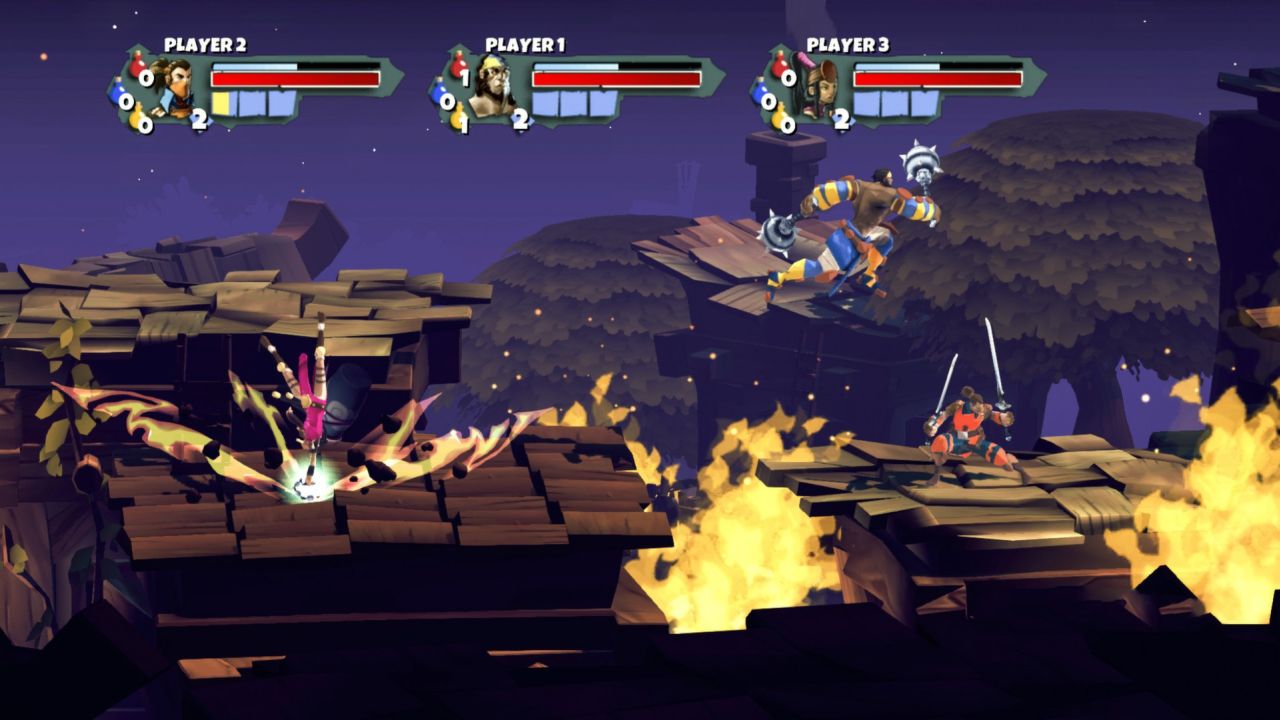 Being a hero can be a lonely business, so luckily you can enlist the aid of up to two other players to aid you in your quest. This can be done either locally or online, although online does have its issues. Players glitch frequently and the game doesn’t support a drop in, drop out method of play so you must wait in the lobby for fellow adventurers to join you. It also means that when the other players quit you forced back to the main menu to find new ones. This wouldn’t be so bad, only for the servers being like a desolate wasteland so you can be waiting indefinitely for teammates. The game does provide a more compelling experience when played cooperatively, so it’s best to invite a few friends around if you want to get the most out of the adventure.

Sacred Citadel is a game that can be easily summed up in one word, simplistic. From its combat to its story and level design it’s a throwback to old-school beat ‘em ups from the SNES era, that doesn't get caught up in many of the characteristics that define modern games, like complex game mechanics and sprawling narratives. Instead, it offers players traditional gameplay wrapped up in gorgeous modern aesthetics. The solid combat makes it an enjoyable title, but one that sadly lacks the complexity and challenge to make it little more than a fleeting ode to a bygone era.

Our ratings for Sacred Citadel on PlayStation 3 out of 100 (Ratings FAQ)
Presentation
80
Character and level design is simple; the cartoonish graphics and bright colour palate make this a stylish and visually striking brawler.
Gameplay
62
A solid and enjoyable combat system with smooth controls and some entertaining boss battles, but its lacks the depth and difficulty needed to make it a memorable experience.
Single Player
56
It takes no more than a couple of hours to complete solo, but due to its simplicity it�s largely unfulfilling and can still start to get repetitive towards the end.
Multiplayer
68
Playing with others makes the game significantly more enjoyable and showcases all the characters abilities.
Performance
55
In solo and offline co-op the game runs smoothly, but lag can dampen the experience slightly if you're playing online.
Overall
64
Sacred Citadel is an extremely basic brawler, and a game that's best played with friends when you're looking for something that you don't have to invest much time or effort in. It looks charming and is entertaining to a point, but it's too primitive to provide a truly satisfy experience. 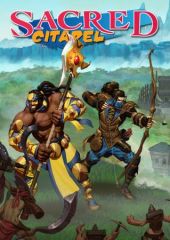