Fast, fresh and very fun, Shootmania offers an exhilarating and focused albeit slightly anemic take on a tired genre

It's hard to know what inspired Nadeo, the developers known exclusively for their crazy track-focused racing franchise Trackmania, to jump into the competitive shooter market. Whatever the reason, the developers who have focused so diligently on providing a single series of unique racing games have again come up with a really good formula for a competitive and precise experience, only this time, you are shooting at your opponents rather than trying to eke out a better time than them. Amazingly, Nadeo manages to execute their vision of an arena shooter almost completely successfully, offering up super smooth controls, inherent balance and stellar net code. While Shootmania's brand of fast, precise and lethal gameplay might not suit everyone, and while existing modes feel a bit limited, those who are looking for a chance to hone their aim and twitch skills should absolutely check this game out.

As in Trackmania where everyone drives the same car on a mechanical level, you generally don't have any say in what weapon you use going into a Shootmania match. The different utilities you will use to eliminate other players (you don't 'kill' people in Shootmania) are determined by the game mode and map. The basic weapon that is found in most modes is a sort of rocket launcher that fires slow-moving projectiles somewhat akin in function to the basic soldier weapon in Team Fortress 2. You can fire four shots in quick succession before you need to wait for your shot meter to recharge, which occurs automatically but slowly after each shot. The balls of light that you emit when using this weapon require you to lead targets, but if seen coming from a distance can be dodged fairly easily, making hitting an opponent quite a challenge. When your shot hits another player with any weapon, a distinctive sound plays and a big '+1' will flash on screen, a tidbit of stimuli you will come to crave. 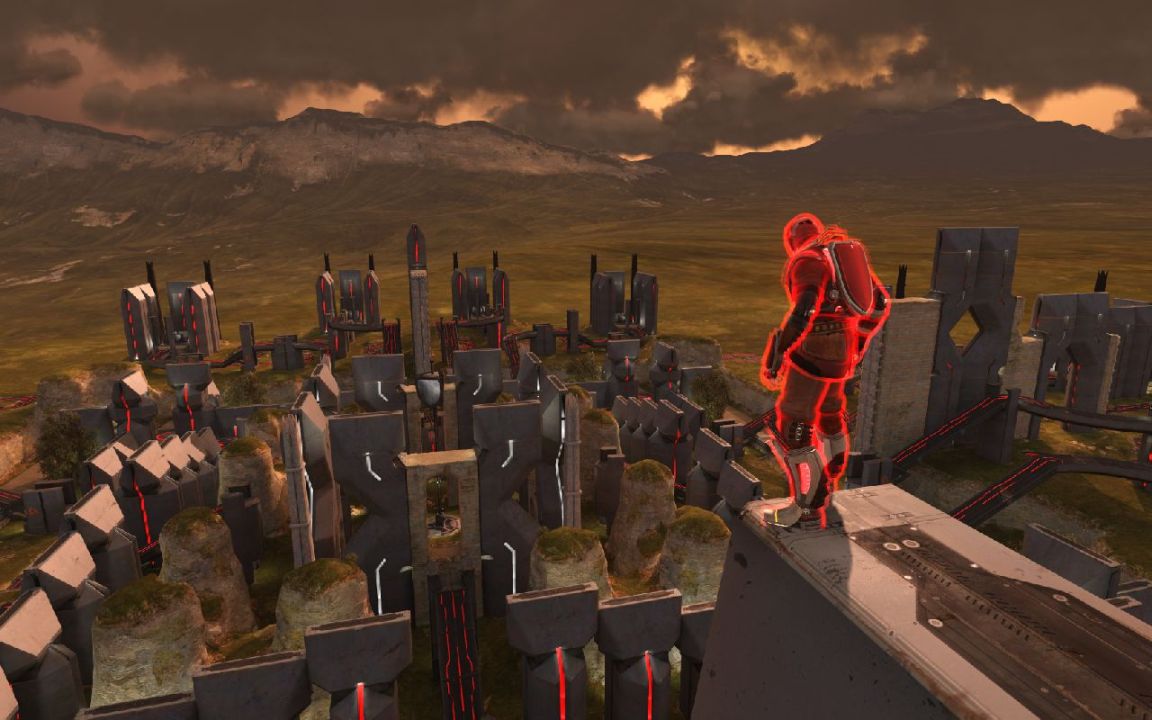 The second weapon is the 'rail' ala Quake, a totally accurate beam of death that has negligible travel time. Some modes use the rail as the default weapon, while in other situations rail platforms grant players access to the weapon as long as they stand on the surface. The third weapon is a sort of grenade launcher that allows you to shoot a slow-moving orb that will attach to the first surface it comes into contact with and explode after a couple of seconds. This weapon is usually contextual and players will be switched to it in underground areas. One thing that players will need to adjust to is the fact that there are no weapon models; only the crosshair changes as the weapon type does. All three weapons are fun to use, and the lack of different weapons means the emphasis is placed squarely on the different modes and interesting movement mechanics featured in the game.

While the movement in Shootmania might initially seem fairly standard, there is a great deal of depth to it. A bit like the Tribes games there is a momentum system where the speed you move depends on the slope of the surface and the surface type itself. There is also a stamina bar that is linked to jumping, sprinting, and gliding depending on the situation. There is one button for using stamina, and what happens depends on the surface you are on. If you are on a normal surface, pressing the button will simply make you jump. However, if you are running and hold down the button, the jump will transition into a short sprint. On some surfaces, holding down the stamina button will make you sprint without jumping. If you are in the air, holding down the button will extend your jump by a few meters or if you are falling straight down, you can slow the rate of descent. 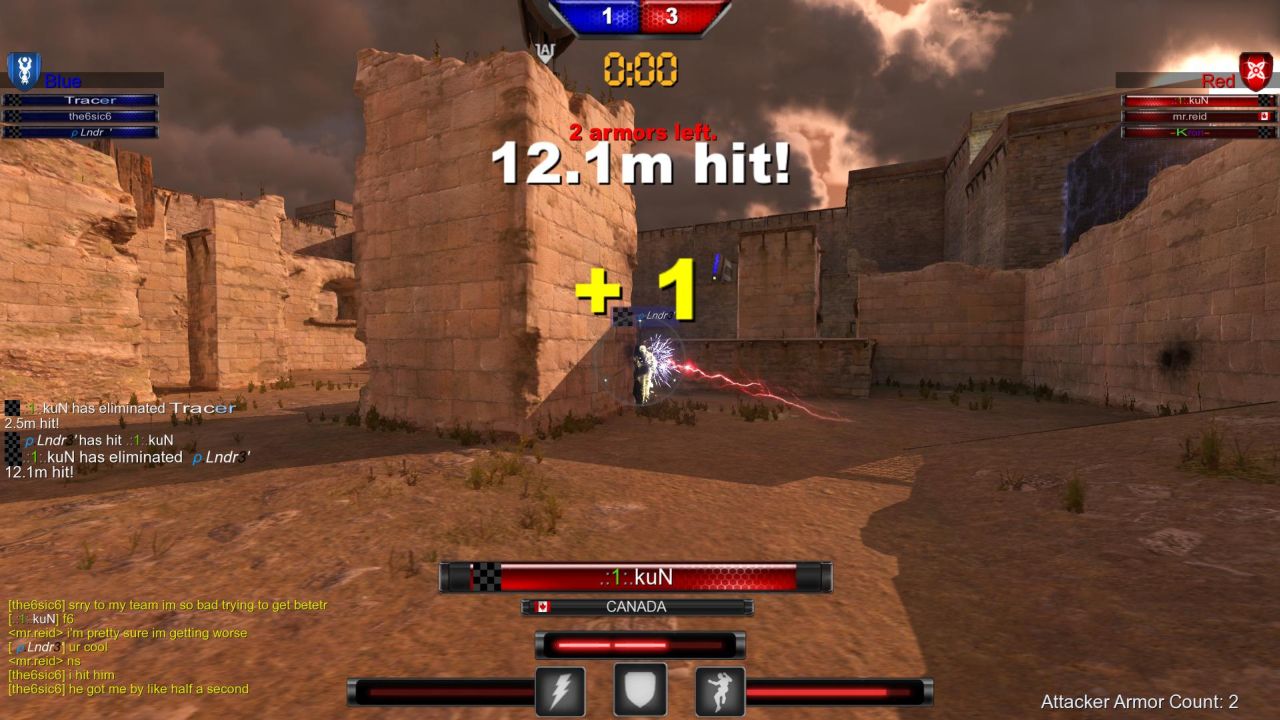 Fall damage is non-existent, and you can perform wall-jumps, or time your jumps so that you gain a huge amount of speed. Aiming and shooting at targets as they zip around the map is a very challenging endeavor, and the combination of high-speed parkour movement and predictive aiming make up the core of the Shootmania experience. Nailing another player while flying through the air with a well-placed rail is exhilarating and satisfying, and since everyone has access to the same weapons frustration is kept to a minimum since you know you can't blame your death on an overpowered weapon.

While Shootmania may borrow some of its ideas from games like Quake and Tribes, the way it puts the mechanics together makes for a fairly unique experience. The mechanics have clearly been tested and refined to the point that they are difficult to find fault with; I got stuck in the terrain once or twice but generally everything works brilliantly. Hit detection is consistently excellent, and I did not experience any network lag to speak of, even when playing on servers with relatively high ping. Those with good aim and twitch skills will consistently be at the top of the leaderboard, but I was able to enjoy myself despite having relatively sluggish reflexes. One small deficiency is a lack of a proper tutorial, although new players gain an extra armor bar in some modes, and the intuitive controls are very easy to pick up. 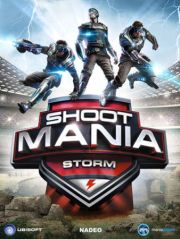 Our Review of ShootMania Storm
83%
Great
The Verdict:
"Fast, fresh and very fun, Shootmania offers an exhilarating and focused albeit slightly anemic take on a tired genre"
Game Ranking
ShootMania Storm is ranked #282 out of 1676 total reviewed games. It is ranked #32 out of 158 games reviewed in 2013.
281. The Last of Us
PlayStation 3
282. ShootMania Storm

All videos for ShootMania Storm (2)
Advertisement ▼