The city of Columbia is not as cohesive or believable as that special city under the sea. Civilians repeat basic scripted animations while you jump around brandishing a rocket launcher. These sedentary, identical mannequins are more like window-dressing than real characters. The audio logs from major characters are rarely fascinating like those in Rapture. The Handyman enemies are challenging replacements for Big Daddies, but they are not linked to the game world nearly as well. The underused Songbird creature, chief jailer of Elizabeth, is less intimidating than a dead fish because it cannot harm the player in cut scenes. 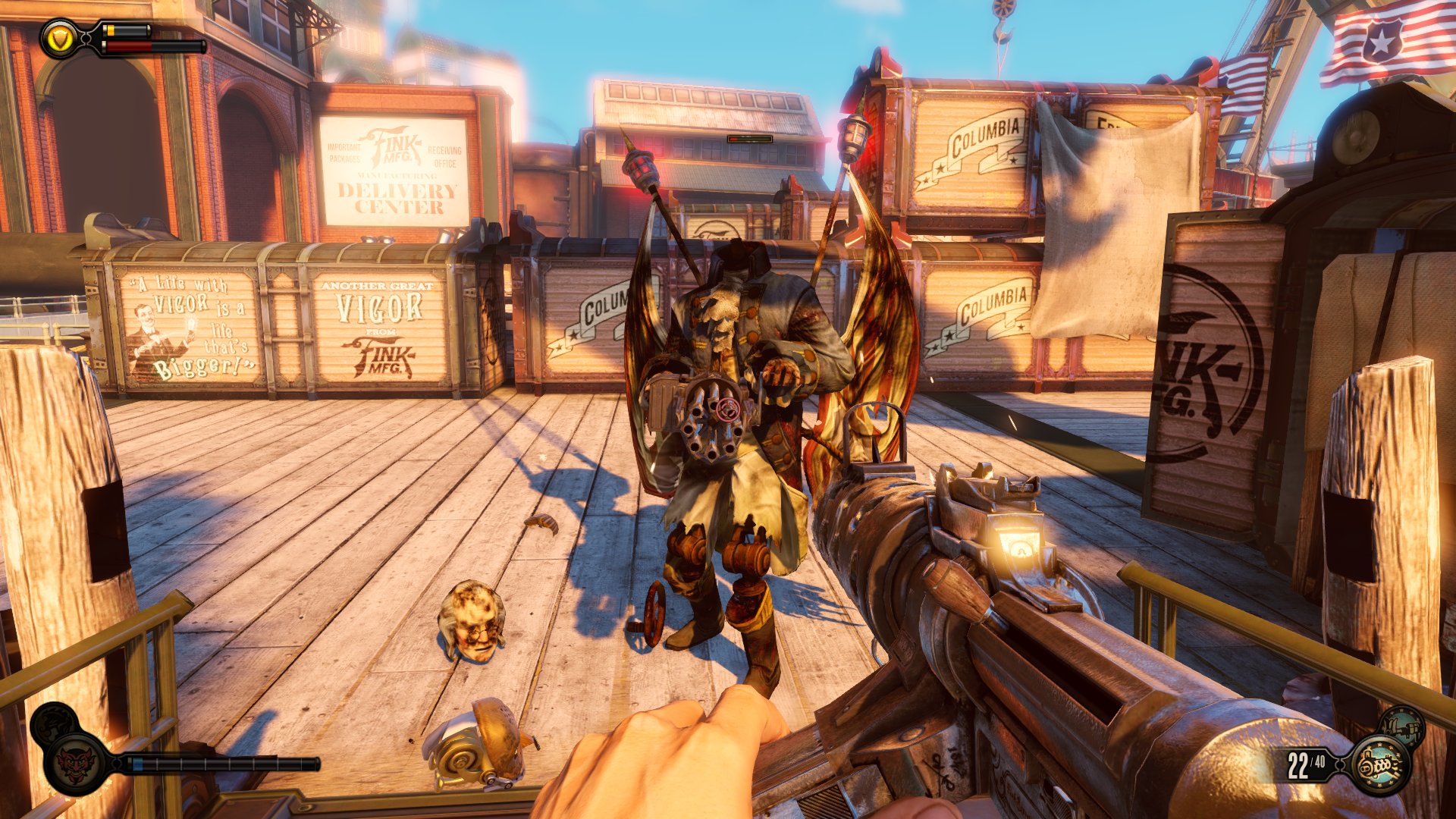 Real patriots don't lose their head in the heat of battle

Furthermore, basic moral choices have no significant impact on the game world. If you choose to comply with a racist mob, you’ll receive a gear package just as if you had chosen to rebel. Holding your weapon at bay during a timed standoff merely gives Booker a cosmetic bandage. Two nameless, unchallenging enemies may show up if you decide to steal from Columbia’s residents. Because choices don’t matter and the world doesn’t consistently mesh together, it is hard to remain fully engaged. Columbia doesn’t bleed atmosphere or perpetuate the absorbing journey that was so important in Rapture.

Navigating the world of Columbia is rarely difficult despite a disappointing save system. Areas are rather linear and make it obvious which direction to head. Avid explorers will find coded messages, audio logs or chests with goodies. An in game map would have been great, but Infinite gives you an arrow which provides no assistance when trying to locate vending machines for upgrades. Checkpoint saves encourage you to take a break when you enter new areas, rather than when it’s actually time to put the game down. Columbia is far less interesting to explore than its underwater cousin.

Travelling through Columbia unveils some unfortunate pacing issues. Progression drags badly during the game’s middle act because of uneventful backtracking. One task has you searching for tools only to make you abandon them when Booker decides they are too big to carry. This is also when the overarching narrative changes direction and becomes a mess until the brain melting conclusion. Characters are tossed aside, despite your enthusiasm to see more. Booker joins nameless soldiers and charges into battle like a scene from Call of Duty. Story events after this directional shift are difficult to care about because they could change at any second. Progressing through Columbia deserved better objectives, more memorable encounters and clearer intent.

There is more traditional shooting in Infinite when compared to its predecessors. Environments are less confined which minimizes the precision and intimacy of encounters. The sniper rifle is ideal for the larger levels and the machine gun is adequate for all battles. Interaction with enemies is minimal and they rarely behave in interesting or funny ways. You shoot your way through one section, briefly explore the area and move onto the next. Special gear can be equipped to promote different play styles or add variety. Unfortunately, this gene-tonic replacement feels tacked on to prevent sameness. A recharging shield encourages you to seek cover after taking damage, effectively replacing the consumption of stored health packs. There is a lot less emphasis on preparation and this makes it hard to invest or be concerned about efficiency. 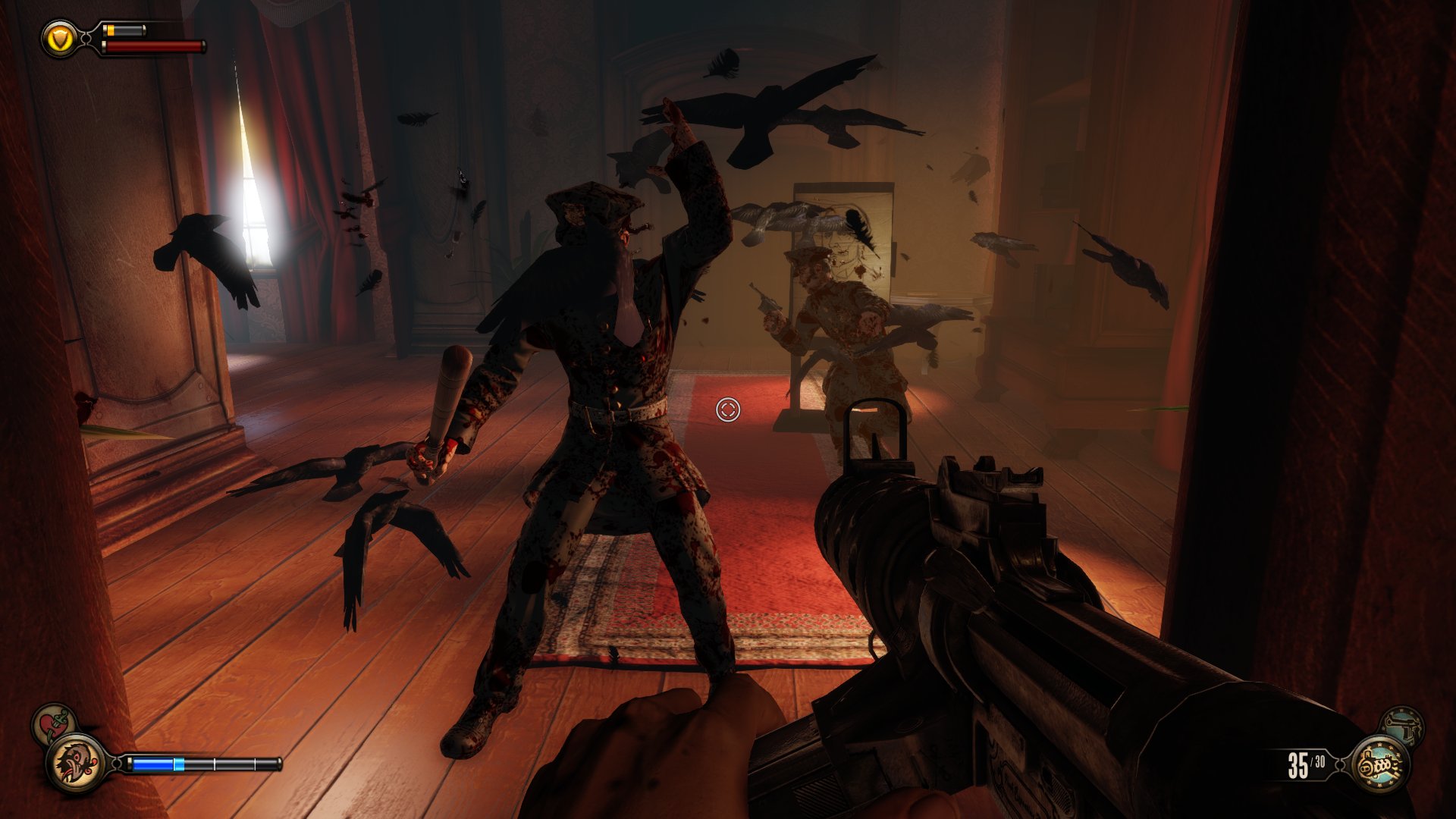 Crows of a feather, eat flesh together

Vigors are essentially the Plasmid powers that have been part of the series since the beginning. Series favorites, like Electro Bolt and Incinerate, return in their modified forms. The telekinesis and freezing powers are sorely missed, although the new powers, like Charge, attempt to bridge the gap in large combat zones. All Vigors have an alternative fire mode, but most of these are just trap versions of the base ability. Cautious enemies rarely trigger these traps, despite numerous attempts to lure them. Superb effects, both in the world and on Booker’s hands, are a sight to behold when you equip each power. Vigors are just another fun way to kill scores of bland enemies. 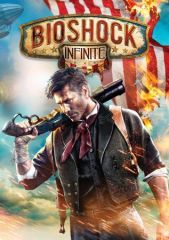