A polished adventure/platformer with excellent humor

Fans of old-school adventure games are most likely familiar with Ron Gilbert’s work which includes Day of the Tentacle, Maniac Mansion, and the Monkey Island games. Therefore, a new game created by Gilbert is bound to have his trademark style and brilliant humor. Even though The Cave is an adventure-platformer rather than a classic point-and-click, it still manages to be an excellently written and quite enjoyable title that won’t disappoint Gilbert’s fans. 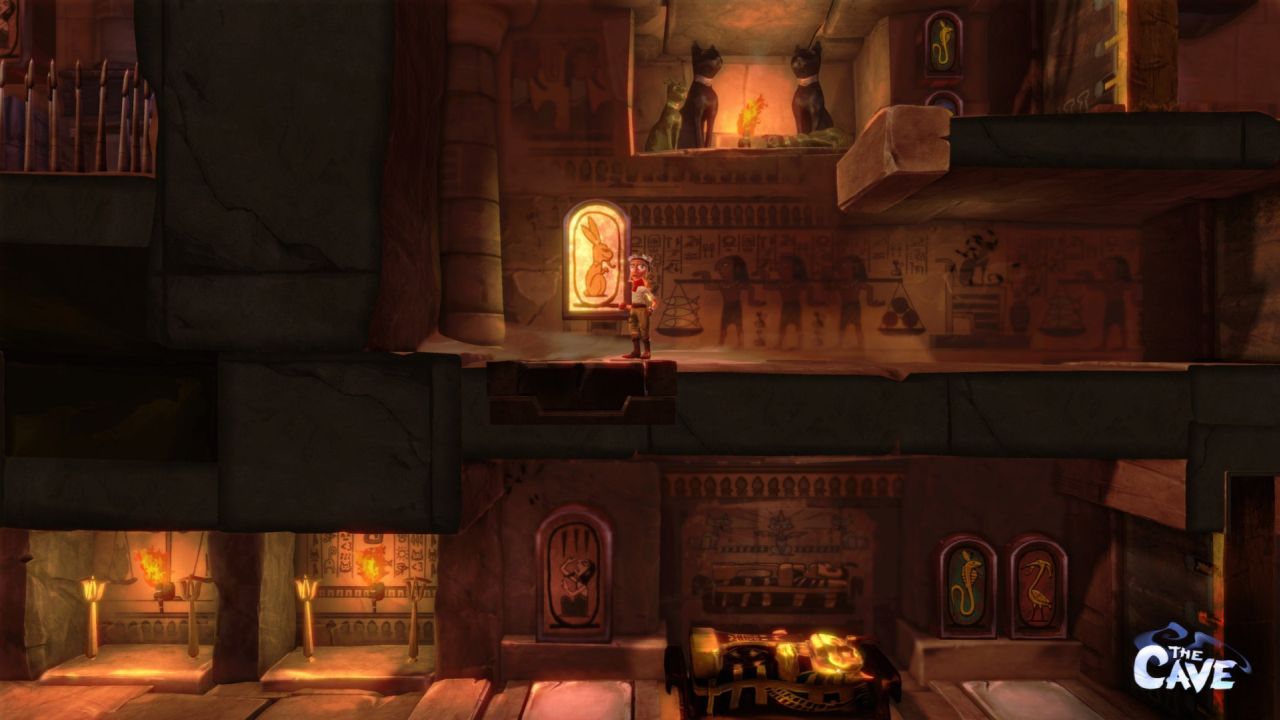 Beginning the game we see that – at least initially – there is no main story. We are briefly introduced to the 7 different characters by the game’s main narrator, the Cave itself. During each playthrough we get to choose 3 out of the 7 characters which include the Knight, the Hillbilly, the Time-Traveler, the Scientist, the Twins (which count as one character), the Adventurer and the Monk. Each one of those characters has a special ability that can be used during the game. The Knight can become invincible, the Hillbilly can hold his breath under water way longer than the rest, the Time-Traveler can teleport/phase and reach blocked areas, the Scientist can interact with machines, the Twins can create a clone of themselves which can perform certain tasks, the Adventurer has a grappling hook which allows her to climb and reach some areas, and the Monk can telekinetically move objects.

When you begin the game and pick your characters and finally enter the Cave you cannot go back, nevertheless there is no right or wrong combination of characters to make, as puzzles can be solved by any character or by using different methods. In fact, the only place that a specific character’s ability is needed is when you reach the part of the cave which concerns that certain character. Although the entire game is well designed, the character-specific parts are particularly enjoyable as they are created in a way that forces the player to implement the character’s abilities and they also provide some information about their back-story. Of course, if you reach a character’s section without having that character with you, you cannot enter that area and you just move along through a different path. 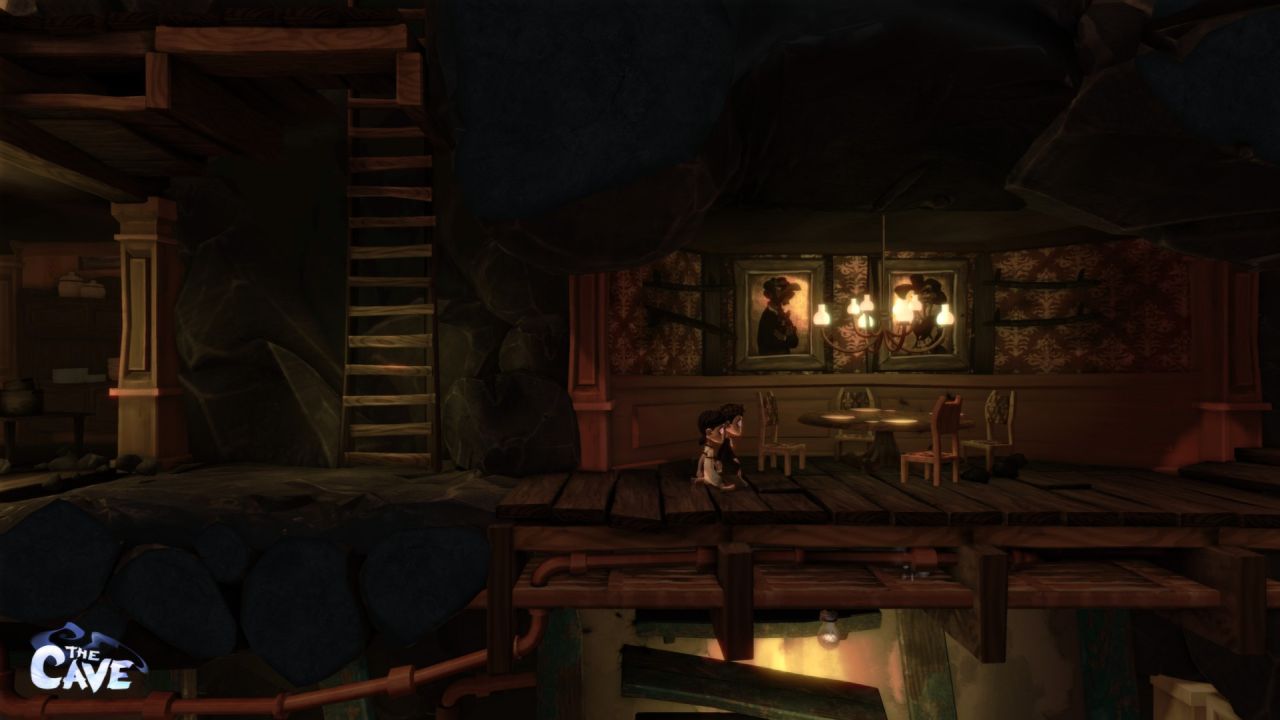 The Cave, as previously mentioned, is an adventure-platformer, with emphasis on the platformer part; you have to jump, push objects and use your intellect to solve a number of puzzles in order to proceed. There is no inventory so each character gets to pick up and hold just one object; in order to get something else the player has to either switch to a different character and make them pick the object or make their character drop the item they are holding and pick the other one. This is not really a problem though since there is only a handful of items to be used in each area and most of the time their use is obvious. During gameplay you can switch between characters whenever you wish, which is essential since many times the characters have to work together and even synchronize their moves in order to solve a puzzle.

Even though there are numerous puzzles to be solved in The Cave, most of them are not very hard to figure out with only a couple of them being a bit ‘out-there’. The game in general follows the basic platformer rules with the exception that the characters cannot possibly die. When they do happen to fall, or drown, or meet any other sort of unfortunate demise, they just regenerate a few steps back from where they’ve been and there is no penalty whatsoever for the player. Perhaps one of the most enjoyable aspects of The Cave is playing it with a friend as it makes puzzle-solving way easier and quite more fun. Unfortunately the game only offers a local co-op option, which basically means that up to 3 players can play together but they have to be in the same room as there is no online alternative. The game’s co-op is quite enjoyable but the lack of a split screen can make things a bit confusing sometimes. Moreover, the game can be perfectly enjoyed even when you play alone but then you’ll have to deal with quite the backtracking. Since you’re required to do everything yourself you will soon notice that The Cave will make you move back and forth and switch between characters frequently in order to solve a puzzle. This can become a bit tedious in time, especially if you haven’t figured out exactly what you are supposed to do. 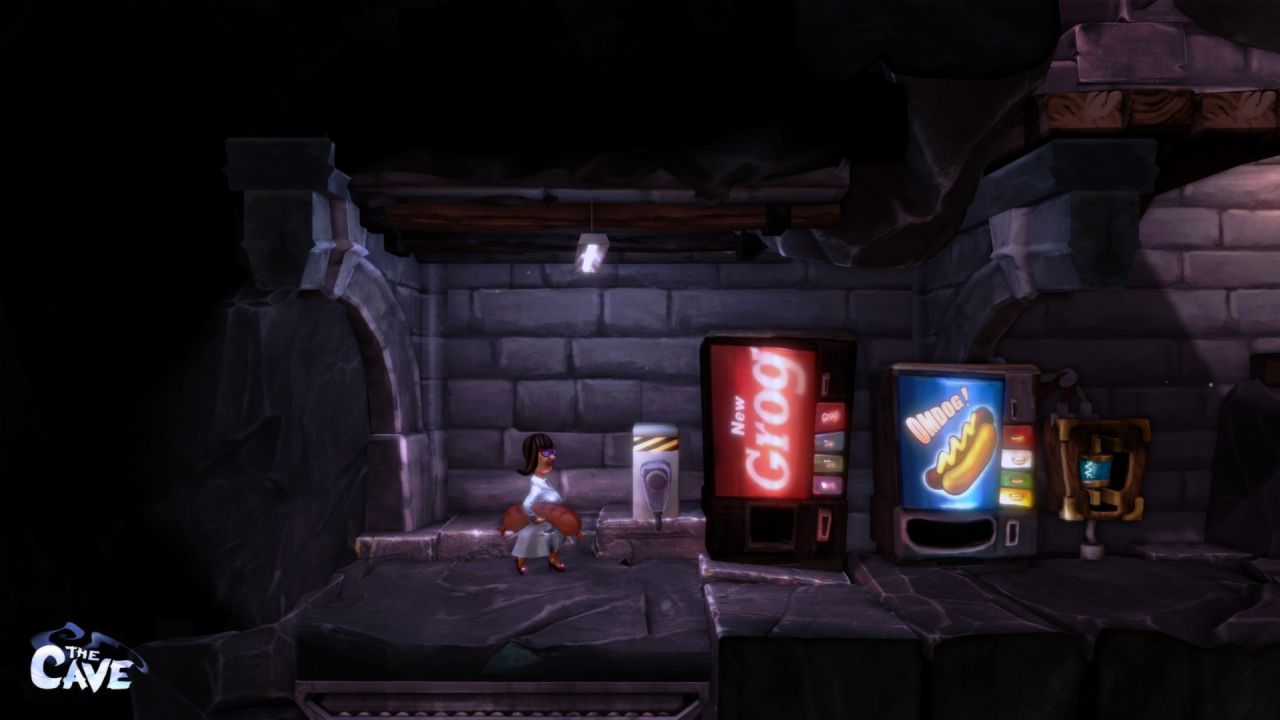 Admittedly, The Cave does have some replay value, mainly in order to enter every character’s area in the game and also to unlock the numerous character sketches which offer additional information about their stories. Nevertheless, apart from these extras there is not anything new to experience when someone plays the title for the second time, except perhaps enjoying it with a friend. This is not to say that the game is not well designed, because it undoubtedly is. Ron Gilbert’s style is apparent from the very start. The environments are beautiful and even though there is not much of a main story or dialogue, the game is full of humor, in some cases subtle in others more obvious. The Cave’s narration and sarcastic remarks are brilliant and so are the majority of the supporting characters that we meet during the game. It might not be on the same level as the Monkey Island games but it is clearly a polished title with excellent humor, and above all what it attempts to do it does quite well.

Our ratings for The Cave on PC out of 100 (Ratings FAQ)
Presentation
85
Beautiful environments and great humor make The Cave a very enjoyable experience.
Gameplay
78
The game has simple controls and overall easy-to-figure out puzzles, a couple of which though could have been designed a bit better.
Single Player
75
In general the game is fun and quite addictive, playing alone though forces the player to do a lot of backtracking which eventually becomes a bit boring.
Multiplayer
70
Solving puzzles with the help of a friend or two is certainly not bad. Unfortunately the game only supports local co-op, with no online options.
Performance
85
The game has no noticeable issues and will run smoothly on most PCs as its requirements are pretty low.
Overall
79
A solid title with clever humor and beautiful art. The Cave, even though it’s not strictly a point-and-click adventure, does manage to bring back a lot fond memories. 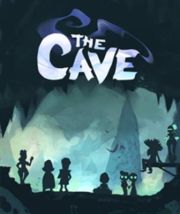