Primal Carnage is a simple asymmetrical multiplayer game that relies on the chaos produced when Dinosaurs and Humans clash. Asymmetrical multiplayer is hard to perfect by the best development teams. A new independent team, Lukewarm media, have decided to find out the hard way. Primal Carnage pits different classes of humans against different dinosaur types in standard deathmatch mode. The result, clearly inspired by Jurassic Park, lacks the tension and precision the setting might thrive on. Instead, Primal Carnage is very much about fun mayhem when Dinosaurs are tasked with eating humans. 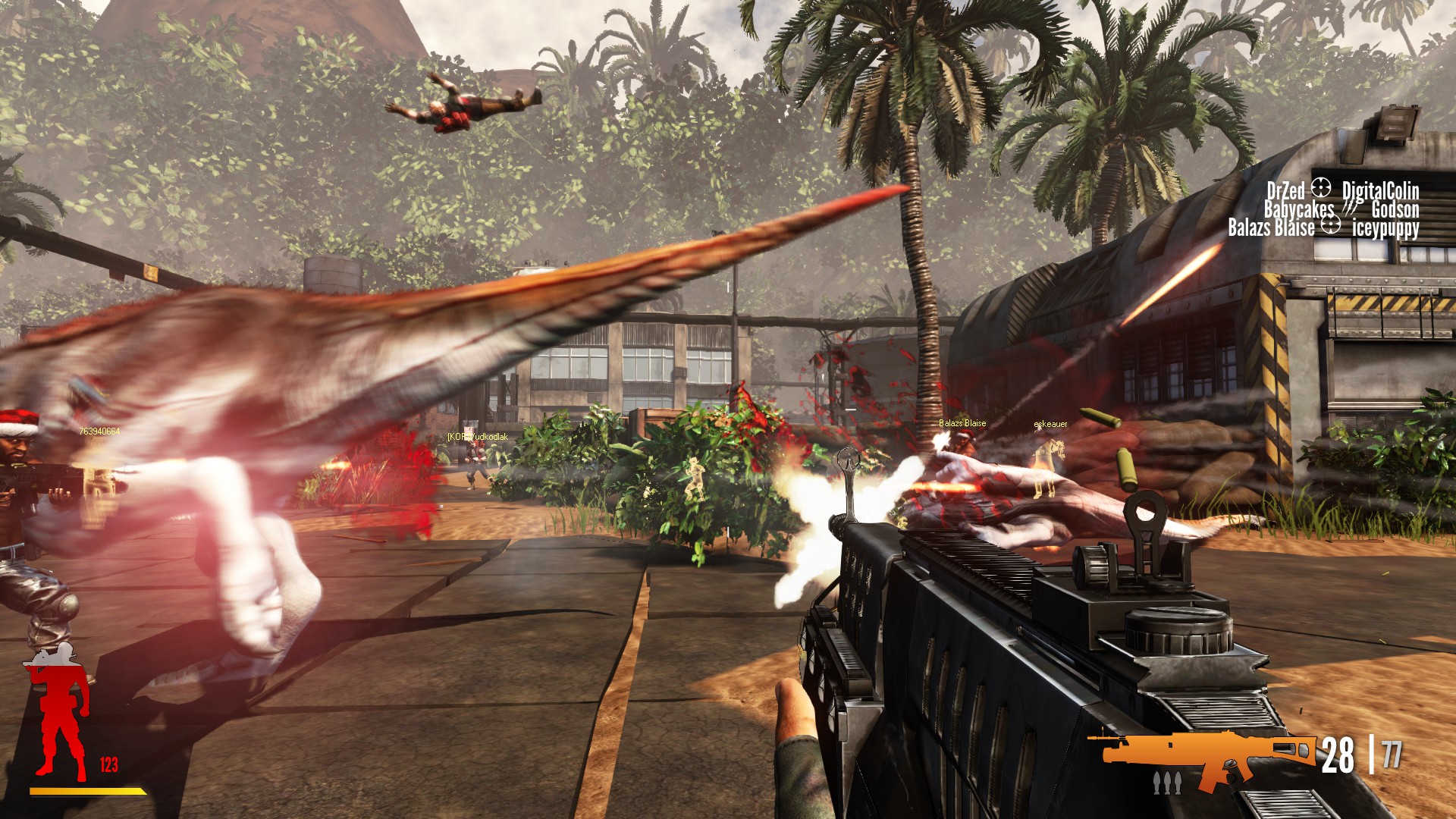 Five human classes have different skills to complement each other and are all played in a first person perspective. The trapper can unleash a net to incapacitate small dinosaurs and then finish them off with pistols or knife. The Pyro can burn everything down at close range or use a grenade. The Hunter uses a large spread, high damage shotgun while throwing flares to blind dinosaurs. The Scientist is a long range sniper that has a tranquilizer to disorientate Dinosaurs. The traditional Commando carries a rifle and a grenade launcher. Each class has a limited toolset but the correct mix of classes allows humans to deal with all Dinosaur encounters.

Dinosaurs are controlled via third person and the different types produce the respective classes for the prehistoric team. The dilophosaurus can blind humans from range so is often a support role. Raptors can pounce and kill if they are left uninterrupted, and this is similar in design to the human trapper with his net. The Pteranodon is a beautifully controlled flying class and it can grab humans and drop them to their deaths. The T-Rex is restricted based on player numbers but is very powerful. He is a high health unit that can chomp humans in one bite or trample them if they get in the way. The T-Rex cannot access all areas, presents a big target and makes the ground shake annoyingly so humans know he’s around. Although there are some camera issues with dinosaurs, they are mostly satisfying to control.

The setup of multiplayer matches comes down to a coalescence of humans and quick dinosaur attacks en masse. Dinosaurs are more suited to attacks and retreats due to their speed and skills. Humans can heal and resupply from carefully placed boxes often found in the central areas of maps. Dinosaurs heal by eating deceased dinosaurs located usually near the outer edges of maps. It’s a shame these resupply stations require precise positioning before they actually work. The slow moving humans stick to open, protected areas away from foliage. They can also find places that make it tricky for dinosaurs to attack. The map design ensures that no spot is ever truly safe for long. A lone human is extremely vulnerable and a single dinosaur is usually ineffective against calm humans. 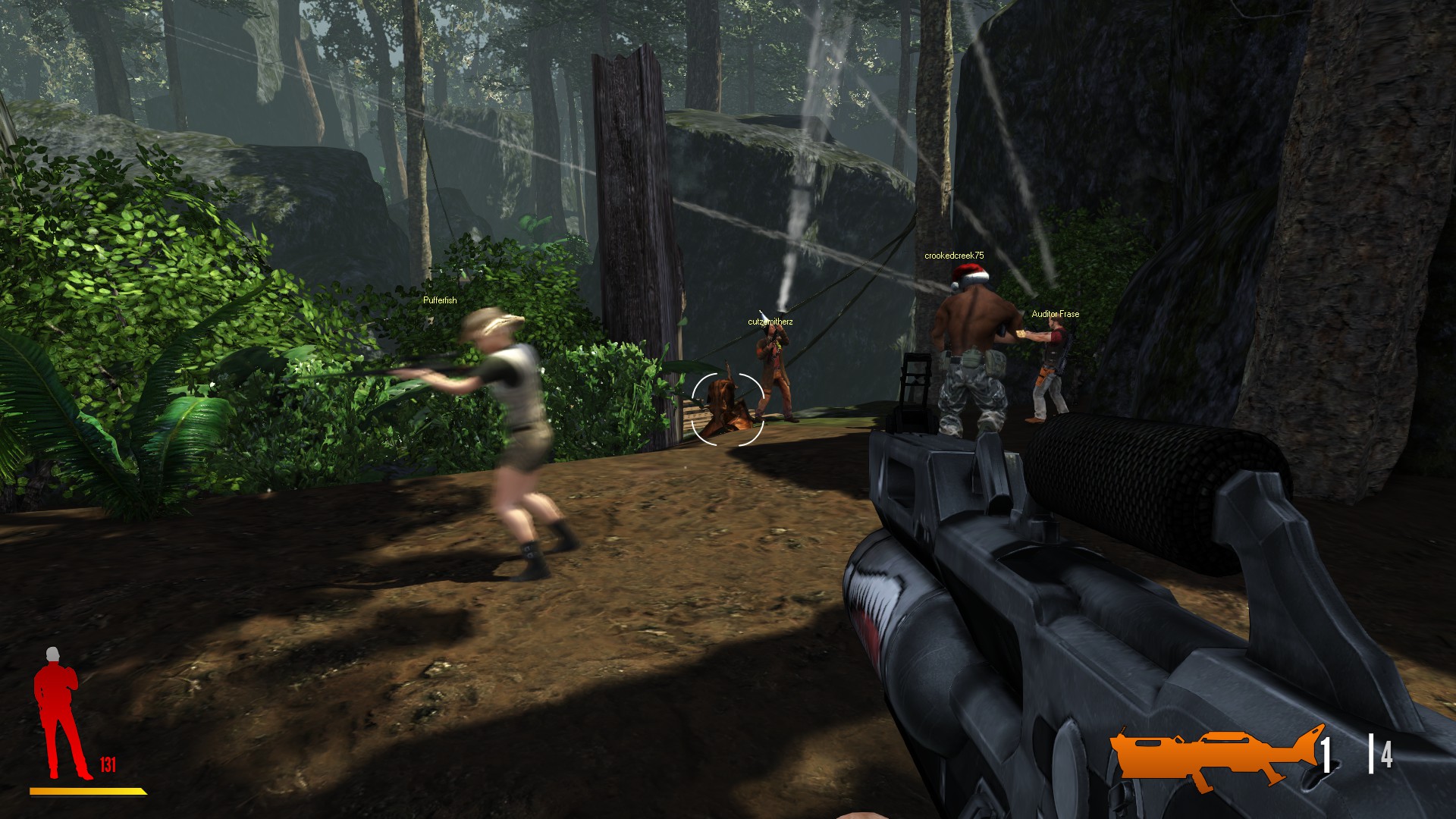 There is a lot of bedlam when 30 or 40 players are involved. With so many players, and their rapid deaths, there can be a break down in structure. The speed of dinosaurs, the prevalence of foliage and some skills results in unpredictable encounters. It’s not uncommon to be circle strafing as one or more dinosaurs steer their body to try and attack you. You could use a friend as bait as you try to draw out a raptor that is vulnerable after he pounces. Some easy kills are found at human health stations, provided nobody is covering the injured player. Respawns are quick but may place you far away from your team. As a human, it is tense to make your way back to the group without being killed. When you come back to the action, the insanity continues. 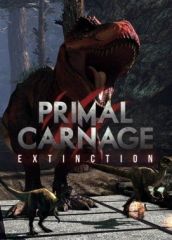 Our Review of Primal Carnage
70%
Good
The Verdict:
"A dinosaur themed multiplayer game that is light on content but high on mayhem"
Game Ranking
Primal Carnage is ranked #1097 out of 1739 total reviewed games. It is ranked #103 out of 145 games reviewed in 2012.
1096. Lego The Lord of the Rings
PlayStation 3
1097. Primal Carnage

All videos for Primal Carnage (1)
Advertisement ▼