When it was first announced that Assassin’s Creed III would be the culmination of more than a year of development time and a multitude of Ubisoft studios, fans got excited. It was common opinion that the series has begun to stagnate a bit in the past few years, with the Brotherhood and Revelation releases. Assassin’s Creed III was supposed to change all that, to become yet another franchise-empowering entry that AC 2 was. Unfortunately, Assassin’s Creed III is not such a game, even with some core mechanic improvements and new naval combat. This may be the biggest entry in the series yet, but size isn’t everything. 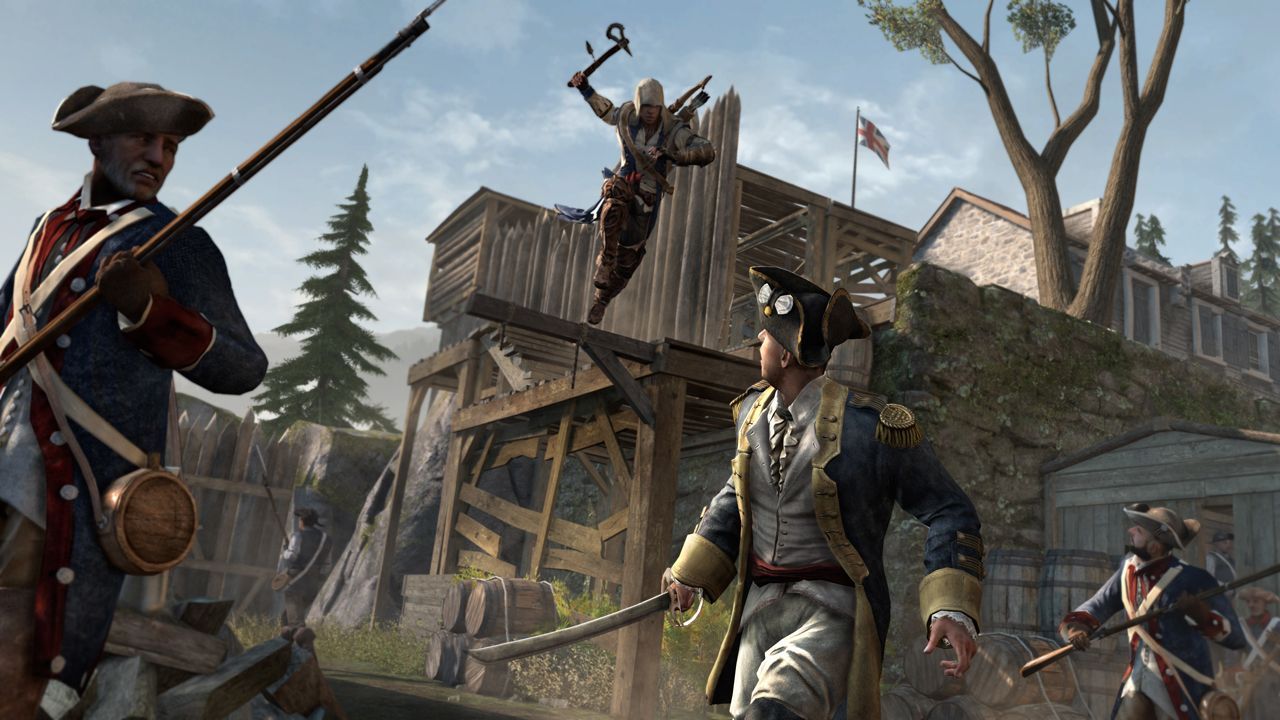 Because this is the first numbered entry in a while, the game does its best to catch up new players with the overall story so far. Sadly, it’s become such a mess at this point, even being light on details means it’s more convoluted than the developers would have probably liked. This is in part due to needless complexities of the plot, and also often poor execution. AC III picks up after the events of Assassin's Creed: Revelations, as Desmond and crew find a Temple in a cave during modern day. Using the Apple to enter, Desmond is quickly overcome by memories of another ancestor – Connor, a Native American man who lived during the American Revolution of 1700s.

Nearly one third of the plot is actually spent setting up the deep personal roots of the new hero Connor, so it’s hours of gameplay before we actually see him in an Assassin suit and doing what he does best. The intro to the game spends time with another character - Haytham Kenway, who is a Templar and ends up being Connor’s father; then we play through Connor’s childhood, until finally reaching adulthood and proper Assassin status. Meanwhile, Desmond goes on a few missions in present day to recover artifacts for the cave that he is in, so that they may open the path ahead and get a chance to save humanity.

While exposition is great and telling deep personal stories of main characters is important, the game’s storytelling ambition is simply overwhelming. It’s like watching a very detailed historical movie involving some fictional characters who are so well fleshed out that they might as well have been real. The downside, of course, is that the series is also known for the gameplay as much as the story, and AC III simply gets the balance wrong. It’s hard to see fans waiting patiently for hours before actually becoming the silent and deadly killer that Connor grows up to be – most of the earlier sequences are just tutorials of sorts that are also used to advance the plot – a design choice that would have had the same effect and taken less time with cutscenes. The story also struggles because Connor is simply not much of a leading man, especially coming off the heels of Ezio who was able to carry three games through his personality. To top it all off, AC III has potentially one of the worst endings of the year, and that’s counting Mass Effect 3, for both Connor and Desmond’s plotlines. 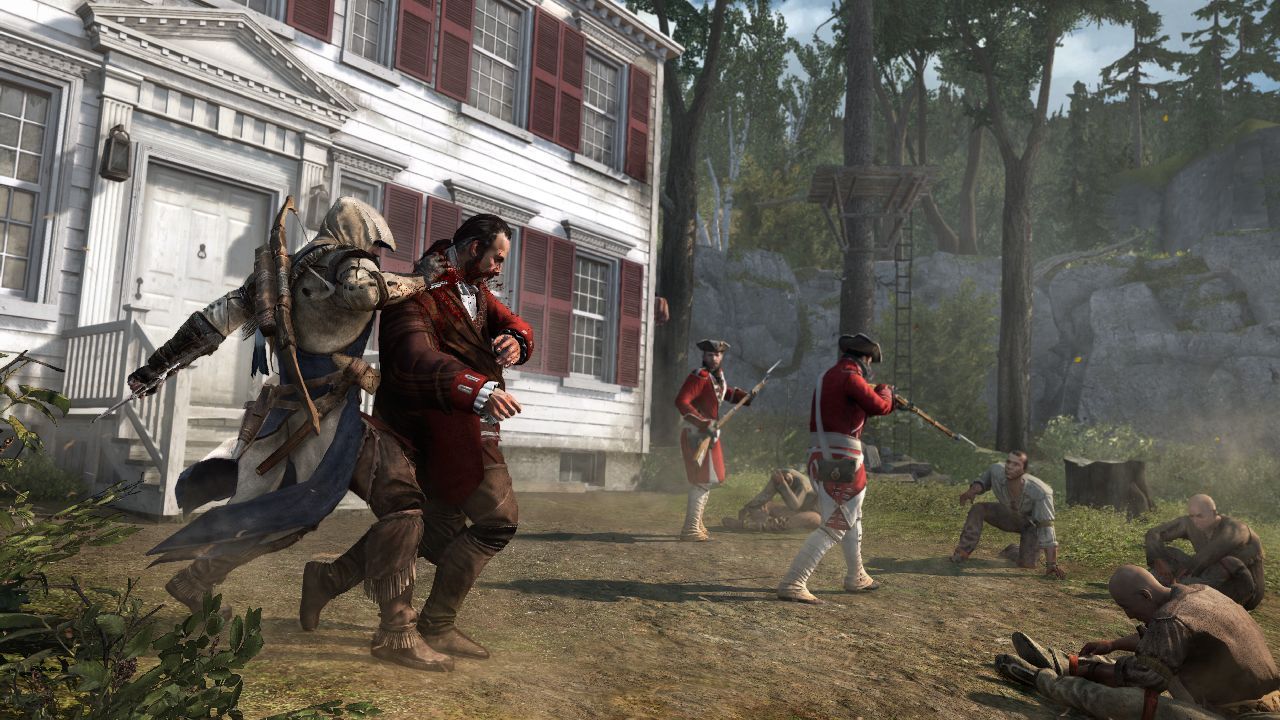 To create such a grand tale, Assassin’s Creed III features a fully realized world that’s probably the series’ best. The main portion of the game is set before, during, and after the American Revolution and players will get to visit accurately recreated cities of Boston and New York, where the ever-familiar free running across the city streets and rooftops can take place. Free running has been tweaked slightly to allow for parkour-like movement over certain obstacles, and exploration is now possible by simply visiting areas instead of depending on viewpoint synchronization. There are various missions sprinkled throughout the game world, alongside the usual acts of collecting things and opening chests. The collectible items have now been made dynamic, requiring you to catch them before they disappear, and chests now appear more rarely but need a lock picking minigame to open. Other open world changes include mobile hay stacks, more options for hiding and blending with the crowd, and wearing disguises. The tower attach/defense minigames are gone, and you can still train a group of assassins - who are now a little more personable thanks to being actual characters.

When you enter into conflict, Connor is a better fighter than his predecessors. The combat system has been redesigned to have a much better flow, instead of being based on countering your enemies’ attacks. That’s still a vital part of it, but Connor can dish out good damage at any time. Animations are smooth and more visceral than ever. New fight props include period-accurate muskets and rifles, which can be fired after a considerable reload time, or used as a melee weapon. You also engage in some combat while playing as Desmond, and that’s equally impressive. Thanks to a lack of HUD, Desmond’s fights feel utterly realistic and brutal. In other words, the first update to the combat system in a long while is a successful one.

Connor also owns an area called a Homestead which acts as your base. This large open area is yours to command – you will be tasked with seeking out and helping NPCs that are in the area, and in return they will make Homestead their permanent home, bringing their services along. There’s now a whole material management system, as Connor can buy and sell items and also craft. You can send caravans to the cities to sell off your goods, at the risk of said caravans being attacked along the way. There’s a lot to do on your Homestead – but it’s all a little unnecessary. You can literally complete the whole game without ever visiting a store or buying anything, because there is never a need to. Sure, you can craft weapons and armor, but you will require recipes, materials, and NPCs settled on your Homestead, plus the enemies don’t get any tougher later in the game. It’s all busywork, and because the game is rather easy overall, it isn’t something that a lot of players will bother with. 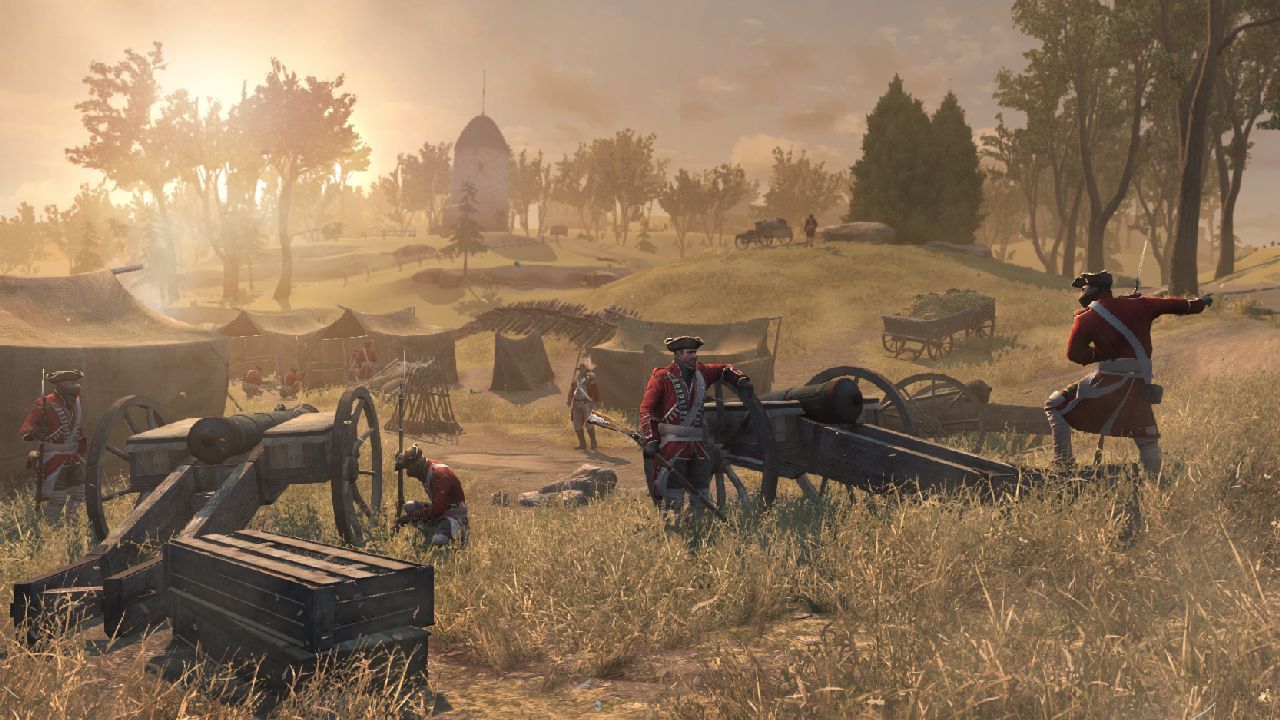 The next major new gameplay addition is a hunting system. Taking place in the Frontier, a huge open wilderness area, Connor can spend time running through the game world and hunting wildlife. The game borrows some elements of Red Dead Redemption, as you first optionally search for clues and then set traps for the hard-to-catch animals. You then skin them, and use the raw materials either for crafting or profit. You can get attacked by larger animals that need a quicktime event to take down. Once again the whole system is decently designed but is simplistic; offering another avenue to the non-existent need for money. What’s more impassive is the integration of climbing in the trees and natural rock formations. Connor looks great as he smoothly travels through the wilds, using new animations and moves to stay off the ground for lengthy periods of time. To the game’s credit, most of the environments also still manage to look real and not artificially designed for plat forming.

Finally, likely the most impressive (at least at first) update to the series is the introduction of Naval Battles. Certainly more exciting than wagon races of the past games, players see Connor commandeer his very own ship in a series of campaign and also optional missions. The basics of sailing include steering, controlling the speed of the ship via deploying sails, and attacking other vessels. Navigation is straightforward, as you control the speed of the ship by deploying full, half, or no sails at all with quick commands to your crew. Extra considerations include rogue winds and trying to sail against the wind. Combat, meanwhile, is quite strategic as you must aim your shot and wait for the target to align, before unleashing a storm of cannon fire. Secondary fire allows for quicker and more precise attacks, potentially letting you destroy enemy ships if their hulls are exposed. Naval combat is both satisfying and also surprisingly challenging compared to the rest of the game. To improve your chances, Connor can purchase upgrades for his ship that include the usual better weaponry and shields.

Multiplayer is likewise solid with some new additions. There are a number of modes to play through in the 8 player arena matches, with a new addition being Domination. Similar to King of the Hill, players are tasked with holding certain points on the map and defending them from the other team. It’s both hectic and tense, given that Assassin’s Creed multiplayer remains the best “cat and mouse” type of game out there. Also new is a cooperative mode called Wolf Pack, where players team up to take out randomly assigned targets within a time limit. There are always a few of them, so all players need to coordinate their strikes to avoid any enemies from escaping – costing precious time. The mode works best with friends, but playing online with strangers can also produce satisfying results as long as everyone participates. 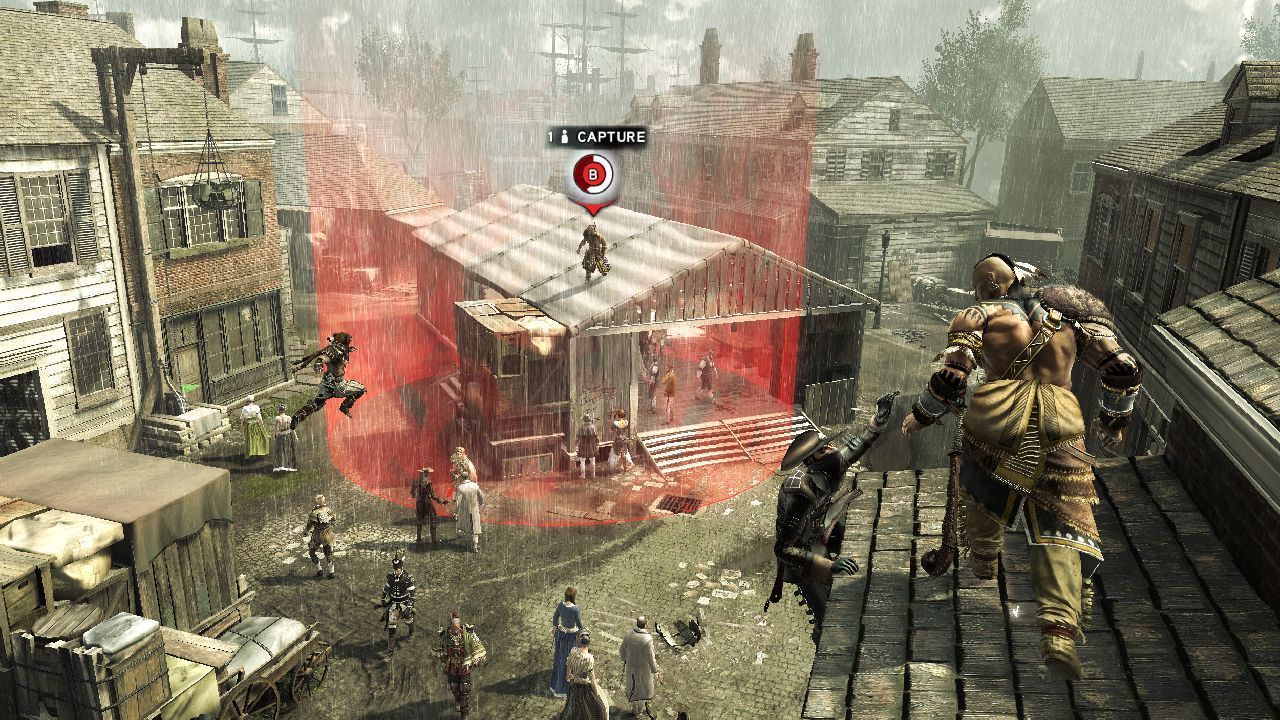 Because AC III is a title with such ambition and so many studios involved, it was probably expected that a few things slip through the cracks. For one, this is one of the buggier AC games in recent years – everything from floating NPCs and weapons to awkward physics. We’ve also experienced an issue where a cutscene wouldn’t trigger, thus sending you on a time wasting trip to see if there was a wrong turn taken. While the cutscenes and dialogue are well produced and delivered, out in the game world the draw distance leaves much to be desired. Some of the visuals and locations used to promote the game fall rather flat and turn out to be quite underwhelming.

Assassin’s Creed III faces a similar problem that the recent entries in the series have hinted at. There is a lot to do in this historically accurate world, but unless you’re a completionist, there are now fewer reasons than ever to undertake the same optional objectives that you’ve seen in the past. Without any real need of money, much of the game – crafting, trading, finding recipes – has little purpose to it. Naval battles, hunting, and combat do introduce some welcome changes to the game, at least. The plot is interesting, but falters under its own weight, starting far too slowly and opting to provide too much exposition. Multiplayer remains solid, with a couple of new modes, and retains the crown of the unique combination of stalking gameplay. This is also a bit of an unpolished experience, likely due to its impressive size. At the end of the day, Assassin’s Creed III is a fun experience, if not for a few issues that prevent it from reaching greatness.

Our ratings for Assassin's Creed 3 on Xbox 360 out of 100 (Ratings FAQ)
Presentation
82
Characters and settings are still impressively authentic, and voice acting delivers for the most part.
Gameplay
80
Classic Assassin's Creed, with a few tweaks and an updated combat system. It's been done before, but never quite as good as this. Addition of hunting and naval combat is welcome but hardly game-changing.
Single Player
70
A very detailed story that takes too long to get started. Easy combat and no real need for an economy, thus rendering many of the game's activities unnecessary.
Multiplayer
85
New additions and returning modes provide some of the best online murder stalking around.
Performance
70
Various bugs and low draw distance often hinder the overall experience.
Overall
75
Assassin's Creed III sets out to start a revolution, and while the result is a bit underwhelming, it's still well worth taking up arms for.

All videos for Assassin's Creed 3 (7)
Advertisement ▼