The stealth genre has gone into recession in the last few years, with series which traditionally provided stealth focused gameplay now sliding towards the more widely appealing action side of the fence. Gone are the Theifs and Splinter Cells that not only encouraged but required you to lurk in shadows and strike swiftly and silently, alluding detection and achieving goals silently and cleanly. This dearth of proper stealth games has left a hole in the gaming market, as no other genre can offer the same blend of tension and breath-releasing relief as you plunk the resting body of an unconscious foe into a well-hidden nook in an intricate level. 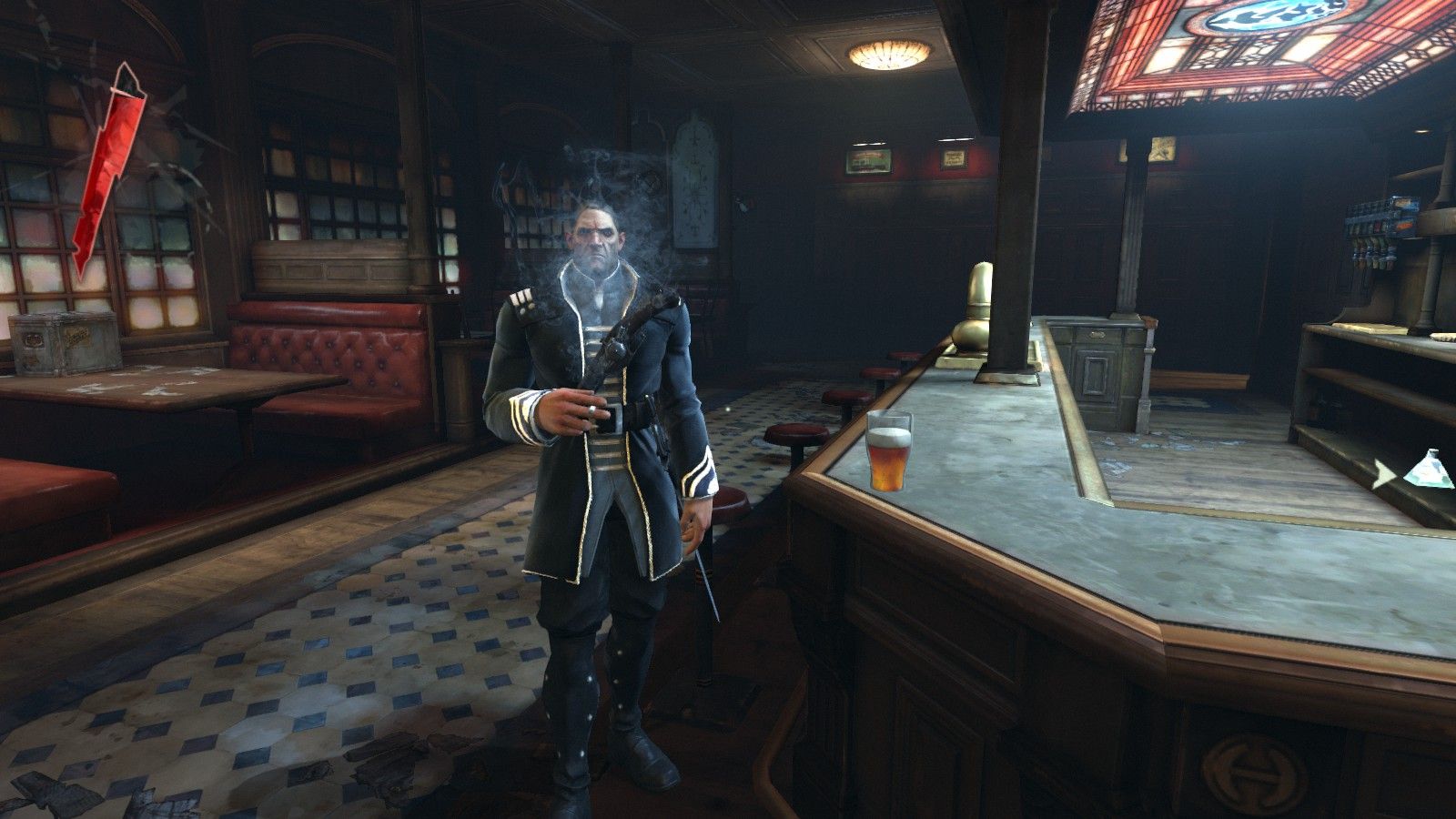 An abandoned pub serves as the Loyalists' base of operations

While Dishonored is not a straight up stealth game like some of these classics, it can provide this experience. Dishonored attempts to follow the Deus Ex school of gameplay design by letting you choose how you want to play, and provides the tools for multiple play styles. While it isn't quite as flexible as a game like the original Deus Ex, Dishonored is largely successful in letting you play as you wish, a feat which has not been pulled off so successfully since last year's Deus Ex: Human Revolution. Like Deus Ex HR, Dishonored gently encourages you to go the stealthy route, but it is entirely possible to play through the game in a decent variety of different ways. Non-lethal avoidance, silent-but-deadly assassinations, or balls-to-the wall, swash-buckling sword fighting and pistol dueling are all entirely possible and equally effective ways of getting through Dishonored.

The story of revenge that serves as a backdrop for your deadly (or non-deadly) shenanigans is fairly bland as far as revenge stories go. You, as Corvo, the lord-protectorate of the Empress, are framed for her murder and after escaping from prison are taken up by an organization of loyalists who realize your innocence and wish to dethrone the newly seated Lord Regent. The characters are well voiced, but most of them are flat and uninteresting without any real back-story, and it is difficult to become invested in the quest for revenge. The plot takes a few lazy, predictable twists as it unfolds, but the narrative is not what keeps you pushing forward.

Beneath the uninspired plot there is another, much more interesting story. This is the story of the fictional English whaling town of Dunwall that has been brought to its knees due to the near extinction of whales and a terrible plague spread by the infestation of rats. This is a town under the control of the corrupt and dictatorial new Lord Regent, where the sick are quarantined in filthy districts and the wealthy attend extravagant parties in luxurious mansions. To help the Loyalists you must visit both the upscale and the ugly parts of Dunwall, uncovering the story of the city, its inhabitants, politics, past and present through observation and reading books and letters found lying around. Not since Bioshock's Rapture has there been such a compelling and detailed original setting for a video game. 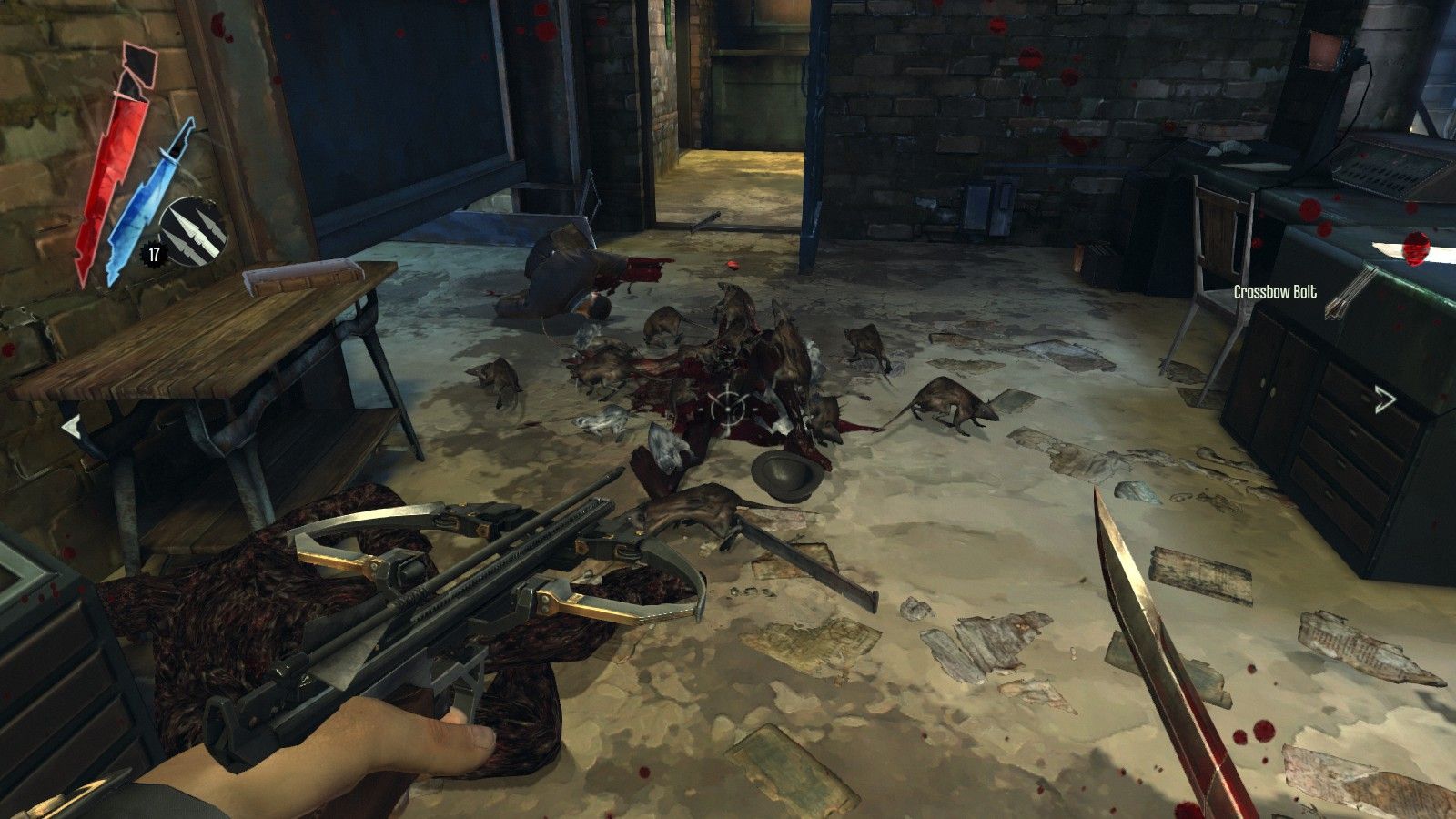 Rats can provide a permanent solution to your body-hiding woes

Near the start of the game you are given the option to unlock and upgrade a series of powers which will help you progress, although the means through which you get the powers is contrived and poorly explained. The default power you get is Blink, which lets you teleport short distances instantly. This power is extremely useful in almost all play styles as it allows you to bridge the gap between you and an enemy, escape quickly when an enemy notices you, or climb onto high ledges. Blink is prevalent throughout much of the game, and feels intuitive and natural once you get used to using it. It can be a bit finicky when trying to climb on to ledges, a problem which is compounded when you try and perform mid-air blinks onto ledges, but for the most part Blink is a great ability that helps set Dishonored's gameplay apart.

Blink, however, is just one of many abilities you can unlock. As you explore you find runes and bone-charms which can be used to unlock or upgrade abilities, and which abilities you choose will likely govern your play style. Possession lets you take control of animals or even humans for a short period of time, slow-time lets you greatly slow down or even stop time temporarily, windblast lets you push enemies backward with a sudden gust of wind summoned from your hand... the abilities are all quite different and all very useful in their own right. Alongside these abilities you have a decent arsenal of lethal tools, such as a pistol and crossbow with different ammo types, although there are only a couple of options for taking out enemies non-lethally. Combining weapons and powers in interesting ways is where the most fun is to be had in Dishonored, and as a result playing non-lethally forces you to avoid some of the most interesting tools and moves the game has to offer.

Once you learn how to use all of these powers and tools effectively, Dishonored becomes quite easy on the normal difficulty. By default there are markers turned on that indicate the location of your next objective, and also visual markers that indicate how alert an enemy is to your presence. Turn these player assists off and the difficulty up, and the challenge becomes much more balanced. The feeling of vulnerability that is required to make a stealth game really tense never really materializes however, since the knowledge that if you botch your sneaking you can simply hack your enemies to bits rests always in the back of your mind. 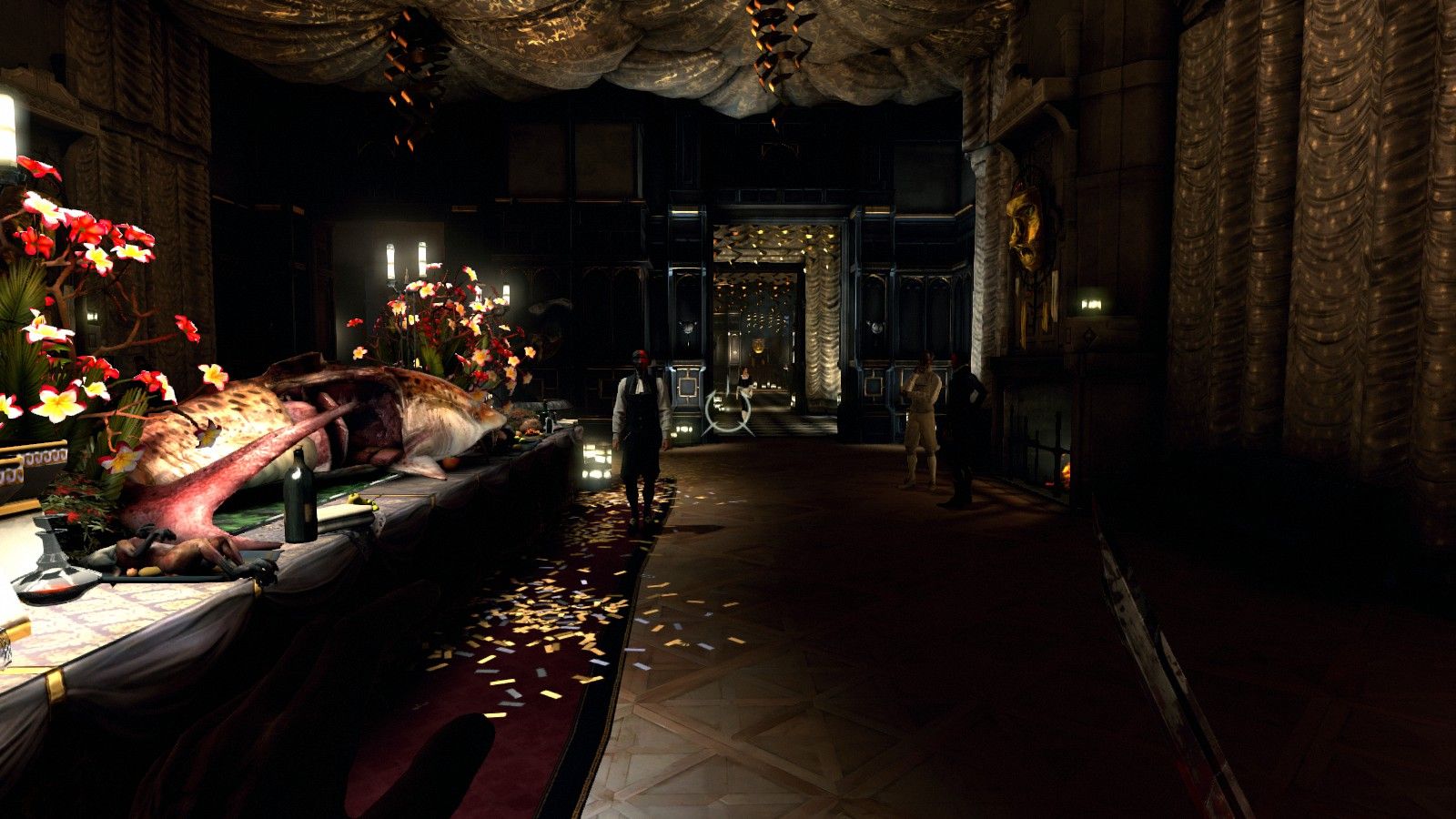 You will visit the up-scale parts of Dunwall...

Stealthing requires you to learn the patrol routes of guards and to use good timing in order to take them out and hide the body before you are spotted. If you would rather avoid the guards all together Dishonored usually has hidden pathways both up on the rooftops and down in the sewers that allow you to bypass enemies all together. It is quite possible to go through the entire game without killing anyone, with options for assassination targets being disposed of via non-lethal means. On the normal difficulty setting guards are not very perceptive and if given time will eventually blame just about anything on rats. Increasing the difficulty however heightens guards’ perceptive abilities instead of just making them harder to kill.

As an action game Dishonored remains highly enjoyable, with solid swordplay and gruesome execution animations. You can combine powers with weapons to confuse or kill enemies, and once you unlock some offensive powers it feels as if you can toy with some enemies, killing them in unnecessarily complicated ways that never fail to bring a smile to your face. Not until you progress further into the game and encounter some of the tougher enemies does the action become at all challenging, and an action play through will take significantly less time than a stealthy one.

Dishonored doesn't cram choice down your throat, but the decisions you make will have an impact later on in the game. If you choose to go the action route, using pistol and sword to fight your way through levels, your 'chaos' rating will go up. A high chaos rating will result in alterations in the later levels involving the numbers of enemies and rats present. The game tells you bluntly early on that going the high chaos route will result in a darker ending, a move which I dislike as it shows the game wants you to try and play non-lethally, even though a non-lethal playthrough forces you to avoid some of the strongest points of the game. I would endorse an experimental first playthrough that ignores chaos; instead come back for a non-lethal replay with the difficulty turned up and the player assists turned off to increase the tension and challenge. 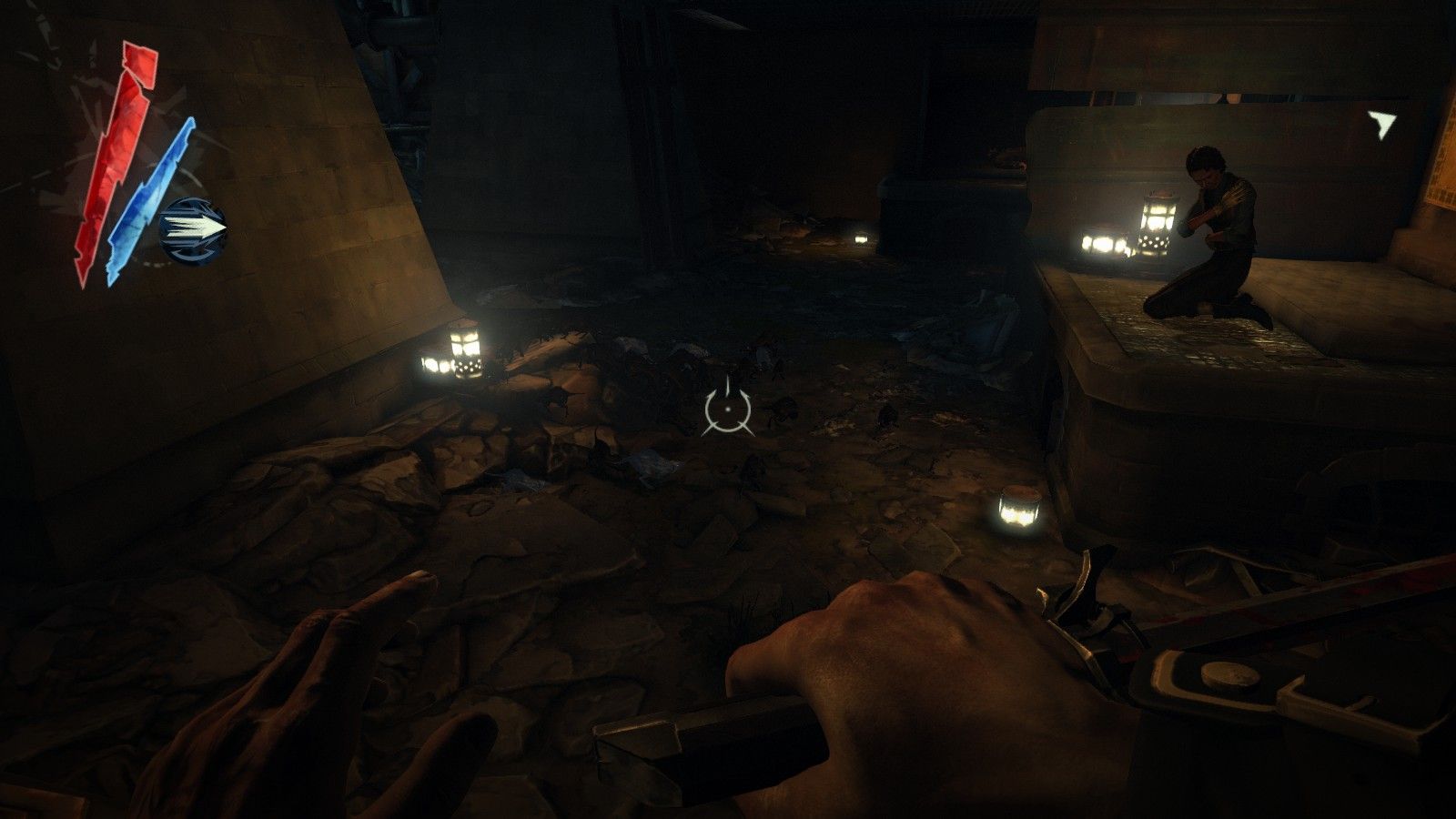 ...And the ugly parts

While the campaign is not terribly long at anywhere from 10-20 hours depending on your play style, the flexibility of the gameplay, intricate levels and upgradable powers means there is a lot of incentive to go back for multiple runs through the game. Assassination targets can be taken out in a significant number of different ways. You can pilfer trinkets and coins while skulking about which can then be spent on upgrades for your gear that once again allow you to hone in on a play style. You might stumble upon side quests that you missed entirely on your first go through, or interesting new ways of getting through a level. The game usually points you towards one solution for most situations, but exploration and observation can often lead to alternatives. Still, for a 60 dollar game the amount of content is a bit thin.

Even though Dishonored uses the tried-and-true Unreal Engine 3, the visuals are slightly stylized making the entire game look a bit like an oil painting, with some interior areas looking especially amazing. The city is a mix of realistic industrial-era architecture and Orwellian style government security infrastructure that gives Dunwall a unique look and feel. Some textures are blurry when viewed up close, but strong lighting and great art design allow Dishonored to look excellent overall. The game runs stable and fast to boot, meaning you won't have to worry about choppy frame rates foiling your perfectly laid ambush.

The soundtrack is also solid; although mostly low-key, it works very well with the setting, and gives cues as to when you have been noticed with sharp spikes of piano. The sound design is strong; while sneaking around you will hear guard's shuffling footsteps, and overhear grumbling and conversations that can actually give you clues as to how to complete an objective. A city-wide announcement system blares the latest occurrences in half-truths, adding to the 1984-feel Dunwall at times instills. When the action heats up, the clashing of blades sounds sharp and pistol shots ring out loud and startling. 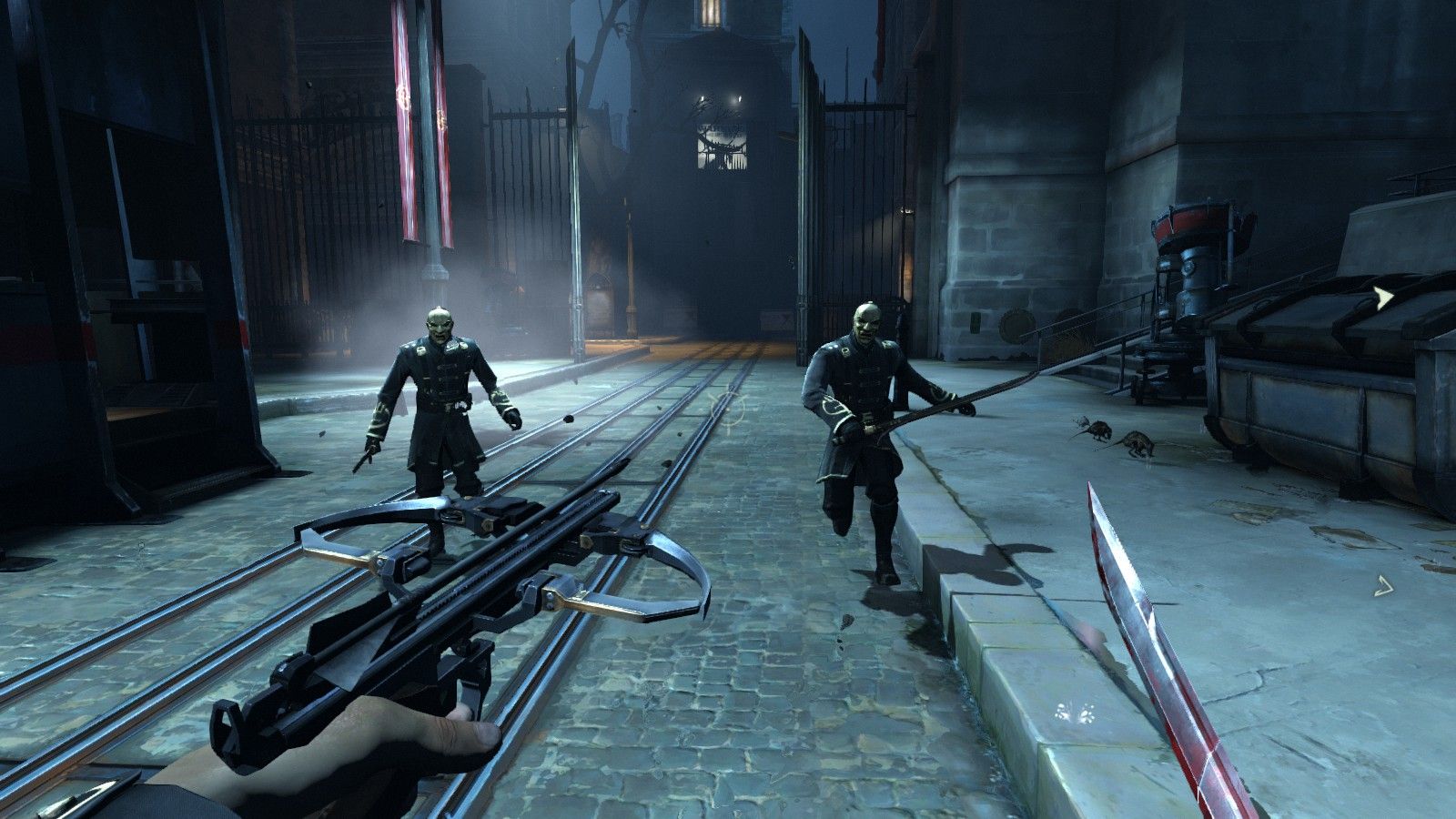 Swords and crossbows take over when you get tired of sneaking

Even though Dishonored lacks the tension and intensity of a full-on stealth game, it allows you to deal with enemies and complete levels in so many different ways it is easy to say that Dishonored is the best stealth-action hybrid this year. Dunwall proves a fleshed out and unique setting with enough back story to make up for the lacking tale of revenge and forgettable characters. Whether you like creeping in the shadows, running across the rooftops or decapitating guards, Dishonored is a game that demands your attention.

Our ratings for Dishonored on PC out of 100 (Ratings FAQ)
Presentation
88
Unreal Engine 3 is showing its age, but great art direction and strong voice acting and audio showcase Dunwall in a truly compelling light.
Gameplay
92
More than competent as both an action and a stealth game, Dishonored boasts some of the most flexible gameplay around.
Single Player
85
The story isn't great nor particularly lengthy, but a great setting and excellent replay value keep you coming back.
Multiplayer
NR
None
Performance
(Show PC Specs)
CPU: Intel i5-2500k @ 3.3ghz
GPU: EVGA GTX 670 FTW 2GB
RAM: 8GB DDR3
OS: Windows 7 Ultimate 64 bit

90
Dishonored runs fast and stable with quick load times and smooth gameplay and controls.
Overall
88
Dishonored breathes life into the stealth genre while offering loads of gameplay alternatives in one of the best original video game settings in years.

Our Review of Dishonored
88%
Great
The Verdict:
"An uninspired narrative is overshadowed by a compelling setting and flexible gameplay in this excellent stealth action hybrid"
Game Ranking
Dishonored is ranked #53 out of 1679 total reviewed games. It is ranked #6 out of 145 games reviewed in 2012.
52. SimCity 4
PC
53. Dishonored

All videos for Dishonored (4)
Advertisement ▼