An improved sequel with more variety, better combat and a longer story mode. Sporadic performance issues detract from the experience

Torchlight 2 shines brightly as a superior sequel with enormous variety. Runic Games have spent the better part of three years developing a game that improves on its predecessor in almost all areas. There is a consistent enhancement to everything from interface to monster design. Randomized environments are expansive, detailed and reward exploration. Character classes are different but the combat remains dynamic and gratifying. If single player isn’t enough, multiplayer allows for some cooperative dungeon crawling. 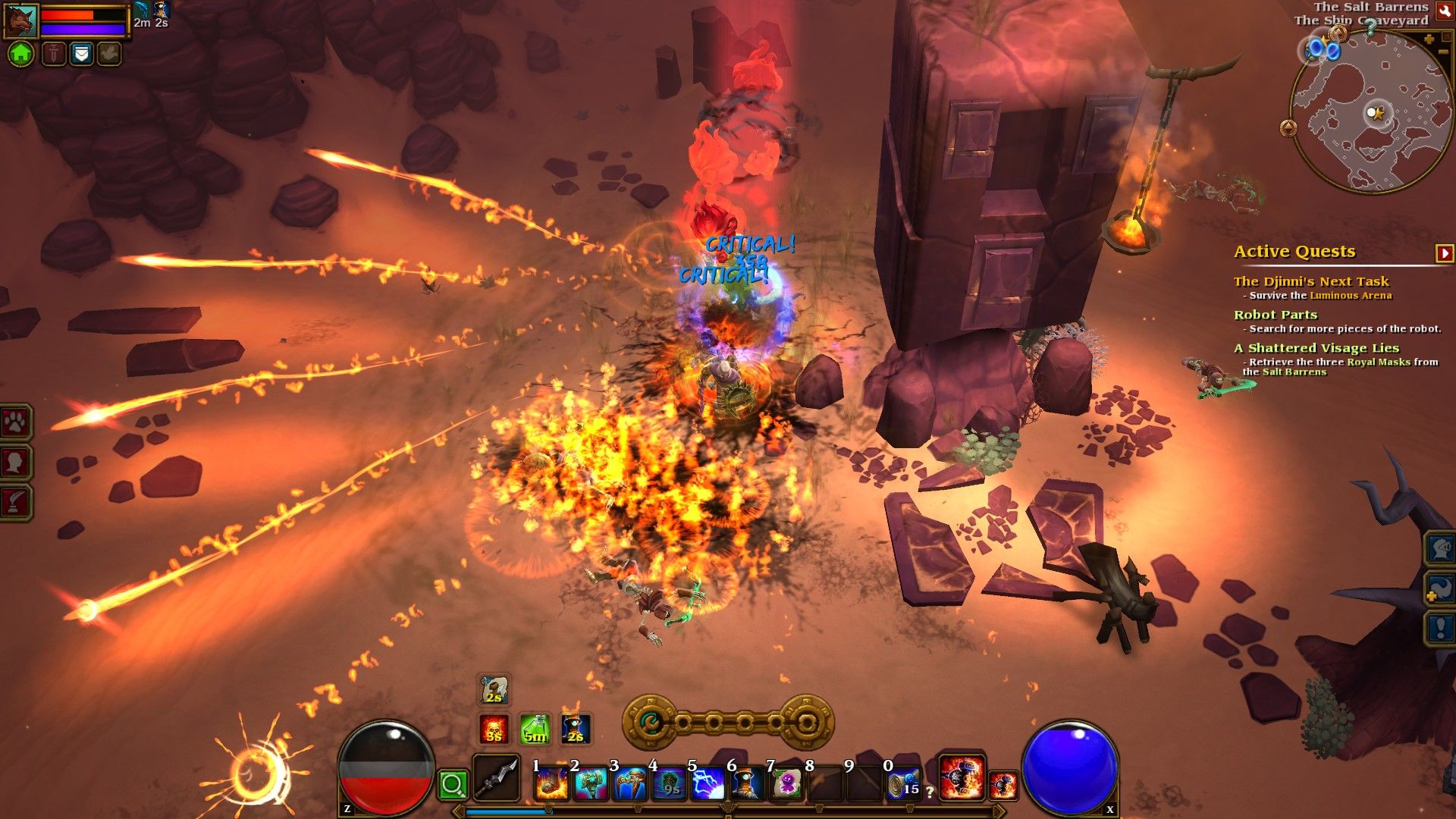 You visit dangerous lands to search for the evil Alchemist

The campaign begins with the town of Torchlight in flames thanks to a powerful Alchemist who possesses Ordrak’s heart. Odrak was the final boss in the first game and great power flows from within this vital organ. You must find the Alchemist and stop him before he uses the heart to bring more destruction to the land. Players start their journey in the Enclave and begin searching the grassy fields of Estheria. The story is not always easy to follow, but still better than the original thanks to better boss battles and brief cut scenes. The locations and quests are well structured to ensure the campaign flows well.

There is a great amount of environmental variety in this sequel. Each act has multiple distinct areas with different atmospheres. The above ground areas are large so they take a while to explore. There are secret areas too, hiding glorious treasure for those with a keen eye. The world you are exploring is randomized, not just the dungeons. One play through might have you searching a barren cliff side while attacking wolves. A subsequent adventure will occur on windy roads fighting zombies near a waterfall. During my 26 hour solo adventure there was only one dungeon section that felt like déjà vu. This world variety is impressive given the length of the game and the amount of randomization.

Exploration begins above ground and then within multi floored dungeons. Structurally this is quite similar to Diablo 2 with dungeons randomly placed in the world. Quests may send you deep underground to defeat a boss or collect an item. After such a quest is complete, a portal to the surface will eliminate backtracking. These side quests are just as good as the main story and offer great rewards. Three lengthy Acts take you through tundra, deserts and swamps. Once the main story is complete you can try new game plus or use mapworks. New game plus restarts the story with all your skills, stats and equipment intact. Mapworks allows you to purchase randomized dungeons, some with buffs or penalties, for endless adventuring. 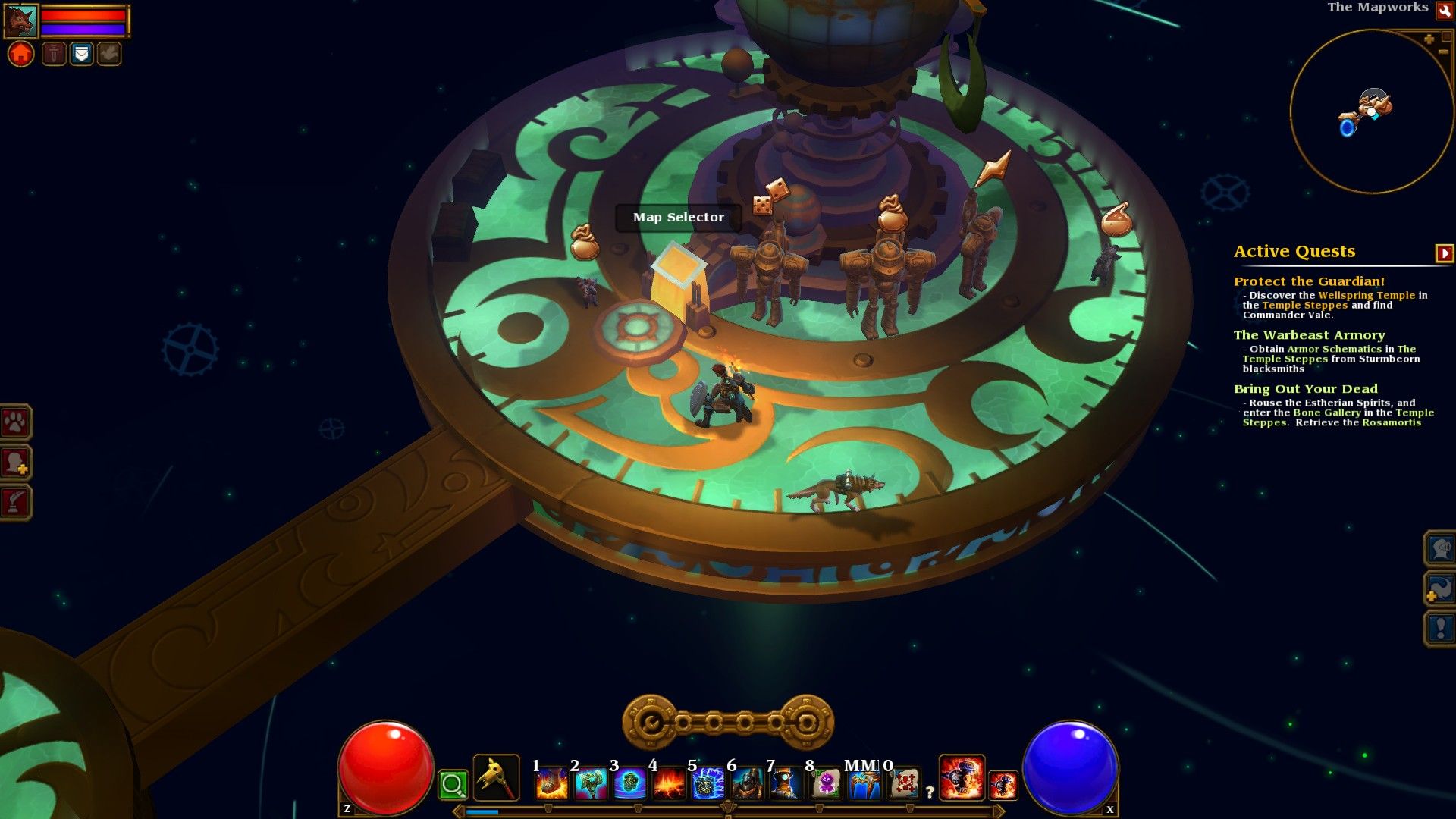 You can continue exploring random dungeons with Mapworks

Combat is the main reason you are driven to keep playing. It’s energetic and always pushes you to improve after each fight. All classes gain charge when attacking and this can fuel powerful attacks or provide temporary buffs. Skills remain the focus of the combat, enemies fall much quicker when combinations are used. You’ll need to be agile and pay close attention to health, mana and the actions of those around you. As you move further into the game you have the opportunity to make the combat as complex as you are comfortable with. You dance around enemies, use skills, drink potions and use environmental bottlenecks to improve effectiveness.

The action structure may seem repetitive but the implementation prevents it feeling tiresome. Using a perfect combination of charged attacks against a dozen enemies can see them fall in seconds. If you make a mistake you may have to retreat, recover some health and head back into the action. The combat is rewarding if you use skills correctly. Once the combat moves beyond the original, it’s easy to get excited when powerful skills finish off attackers. Each battle pushes you to improve and you’ll always want to find the next piece of action.

The four classes are more fun than the three in the original game. Embermage controls the elements to expel magic from a safe distance. The Outlander wields pistols and can throw a powerful glaive. The Engineer can spawn robots and make the ground shake. The Beserker taps into the power of the wolf to send fear into enemies. Pets return for all characters and can run to town to sell (and buy) items while you keep fighting. My wolf proved quite helpful in combat but your own skills are the main attractions. All classes can equip many different weapons but skills may not function unless the correct weapon type is equipped. The new classes offer the roles you’ve come to expect but the skills define them perfectly. 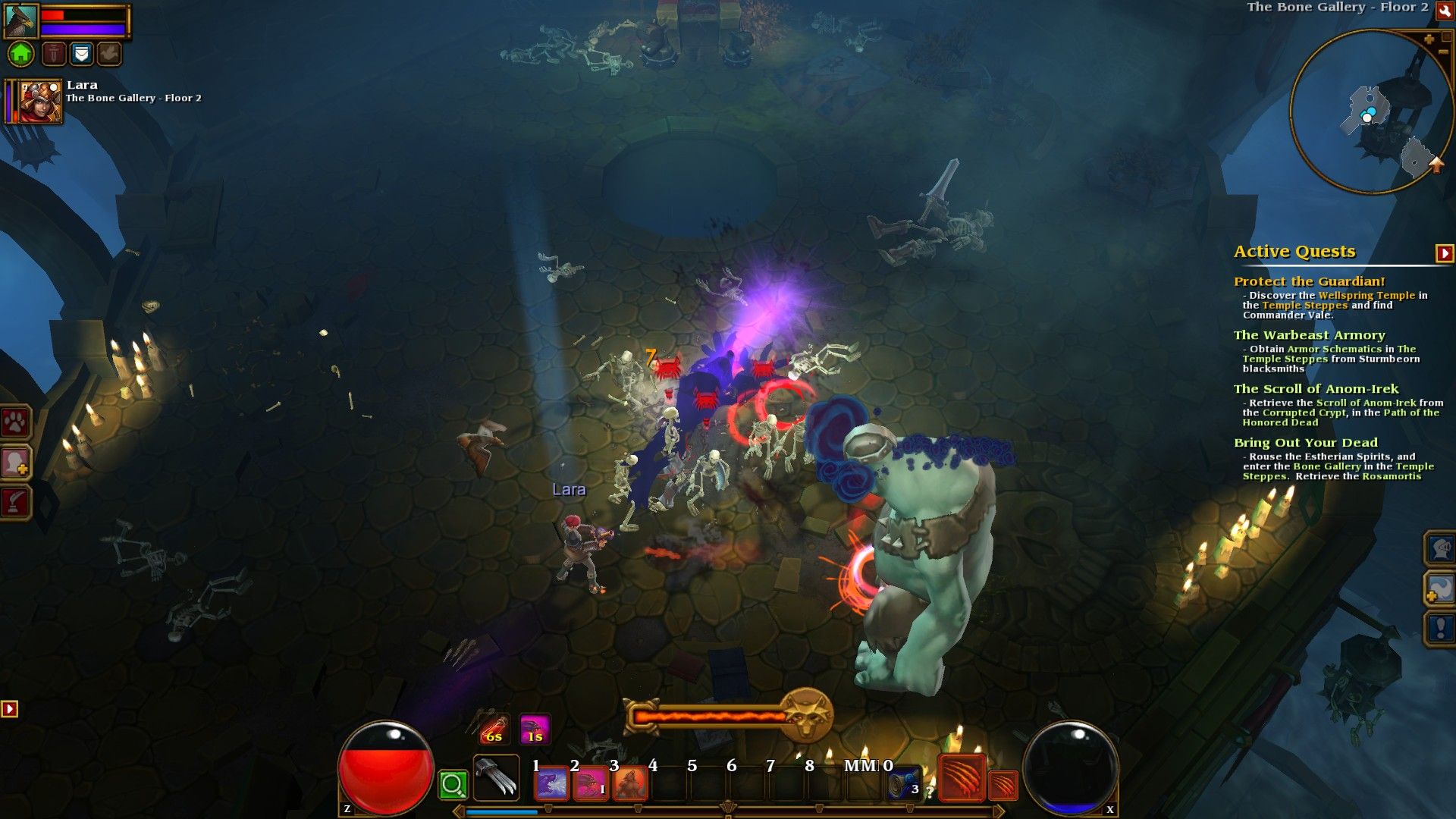 Beserker can tear through groups with wolf powers

Engineer occupied most of my time through the campaign on Veteran difficulty. Combat as Engineer might begin by heading into the middle of enemies with a healing bot in tow. Stomping the ground will daze adjacent foes and a swipe with an axe will convey electrical damage. While you fight one group, spider mines make light work of ranged attackers. Vulnerable monsters can be finished off with a wide ranging emberquake attack or a flame hammer that becomes extra deadly with charges. On top of these class skills you can use spells that might call forth zombies or just send out a fireball. Engineer proved to be more satisfying than the Destroyer from the first game, even with similar attacks.

Character progression is rewarding and monsters scale based on your level. Your proficiency in combat is linked to how you assign stat and skill points. Dual wielding may benefit from different skills than a sword and shield. Similarly the armor you equip may favor a different play style. You might have boots that regenerate mana, allowing daring skill use at the cost of reduced protection. Stats can increase damage, critical hits, mana or armor and skills get new traits with each tier. Investing multiple points in skills does more than just increase damage. Some will be disappointed to learn that you can only reset the last three skill points but this incentivizes restarting anew. Individualized play styles are catered for nicely with this progression system.

The continuous variety of monsters helps the combat feel fresh. Zombies, skeletons, trolls and wolves are some returning foes with better animations. A fantastic number of new monsters will see you fighting something different at every turn. Maniacal Witches spawn from a flock of birds and teleport away from attacks. Hideous Grave Diggers hobble away and continue to unearth skeletons. Gargoyles disappear high into the air and deploy powerful ground attacks. Even returning enemies can carry shields that block attacks until shattered by specific skills. Larger enemies and bosses have fantastic animations and particle effects that explain why your health is dropping. The enemy diversity is as wonderful as the environmental variety. 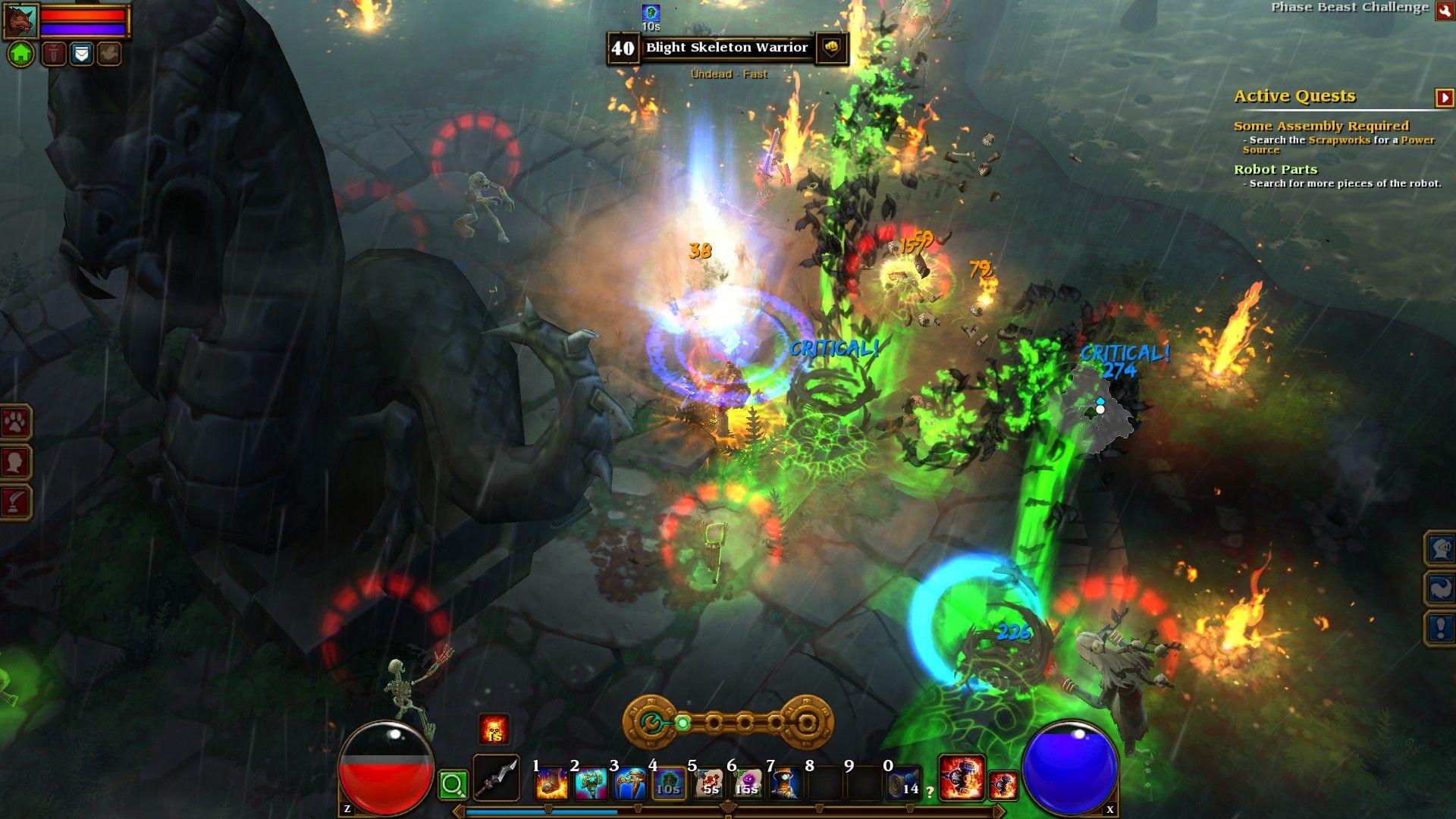 Massive battles are great fun but can hurt the framerate

There is variety to the framerate too; heavy action produces some disappointing slowdowns. The game runs on one processor core and doesn’t heavily utilize the graphics card. Low end systems will run it almost as well as dedicated gaming machines. On the adequate test machine the framerate did drop below 20 when the action intensified several times through the game. It wasn’t a frequent problem but happened enough to detract from the combat. Some spots in Act 3 were slideshows although thankfully not for long periods. It’s a pity this choppiness occurs when Torchlight 2 is at its best. If you have an impressive gaming machine, Torchlight 2 might not take advantage of it.

The Multiplayer, absent in the original, is a big positive for the sequel. A server browser can sort games by difficulty or player level. It is unnecessarily tedious to find players of similar level. Joining higher ranked games is a good way to get killed or miss quests. If you find a game to join, it might not even connect. Once in a game, the online play is generally good and flows at a very brisk pace. Net code was satisfactory for the majority of games with only a few disappearing characters and slight combat delays. There is no big change to the combat in multiplayer even though spells like Heal All become more useful.

Online combat is as fun as it was offline and teaming up with different classes helps maximize strengths. The melee Beserker can hold enemies at bay while an Embermage attacks at range. Enemies grow stronger and champions become health sponges with four players in the one area. Sadly the performance problems are even worse online. Framerate drops quickly with several players deploying skills in moderately populated areas. The online experience is better with just two or three players gradually moving through the world. 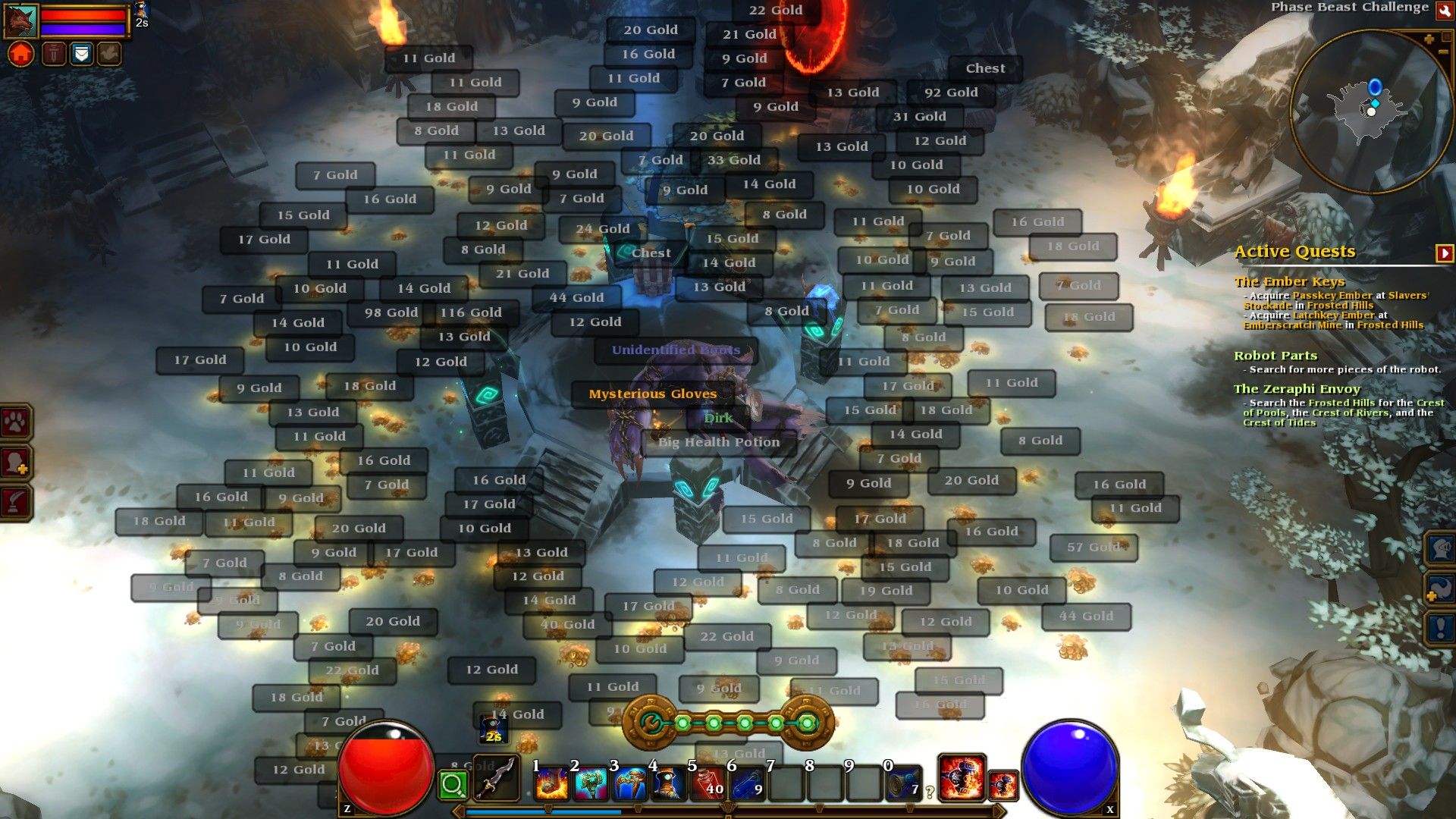 Ignoring the performance issues, Torchlight 2 is clearly an improved sequel. There is more variety with environments and enemies. The combat is electric and remains satisfying for hours even when using the same attacks. Combine this with loot gathering and character progression and you have the ideal recipe for a solid Action RPG. A longer development has led to great things for Runic. If you somehow avoid infrequent performance problems then fortune smiles upon you. If all you wanted was multiplayer version of the first then your wish has been granted. Torchlight 2 is an excellent action RPG that provides near endless entertainment.

Our ratings for Torchlight 2 on PC out of 100 (Ratings FAQ)
Presentation
86
Better environments, monsters, animations and interface. Randomized world is seamless. Matt Uelmen's music seems fresh after dozens of hours.
Gameplay
91
The combat can be complex but is always rewarding. You'll be driven forward in search of more energetic action and to improve your character.
Single Player
85
The story can be difficult to follow but it's structured better than its predecessor. Locations are amazing and most of the quests are good. It offers a great length campaign at over 25hrs.
Multiplayer
80
The same great combat with more players. The action moves at a vigorous pace. Not much different between the offline and multiplayer worlds. Finding a game could be improved.
Performance
(Show PC Specs)
CPU: AMD Phenom II 955 @ 3.2GHz
GPU: Gigabyte 7950 OC 3GB
RAM: 8GB DDR3
OS: Windows 7 Ultimate 64-bit

70
Torchlight 2 barely uses the resources of powerful machines but it will run quite well on low end systems. The framerate can collapse during large battles and the problem is worse in multiplayer.
Overall
84
Torchlight 2 is better than the original and the newly released Diablo 3. There is great variety to locations and monsters and this makes it easy to keep playing. Combat is dextrous, loot is rewarding and replay value is high. Some performance issues prevent true greatness. 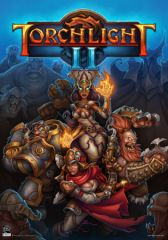 Our Review of Torchlight 2
84%
Great
The Verdict:
"An improved sequel with more variety, better combat and a longer story mode. Sporadic performance issues detract from the experience"
Game Ranking
Torchlight 2 is ranked #217 out of 1732 total reviewed games. It is ranked #22 out of 145 games reviewed in 2012.
216. Trine 2
PC
217. Torchlight 2

All videos for Torchlight 2 (2)
Advertisement ▼