2010's Transformers: War for Cybertron had the distinction of being the best Transformers game to hit the market... ever. The bar wasn't set all that high though. The fact that War for Cybertron was a pretty mediocre 3rd person shooter was forgotten by players and reviewers alike - probably due to the astonishment of actually finding some enjoyment in a game with the Transformers logo on the box 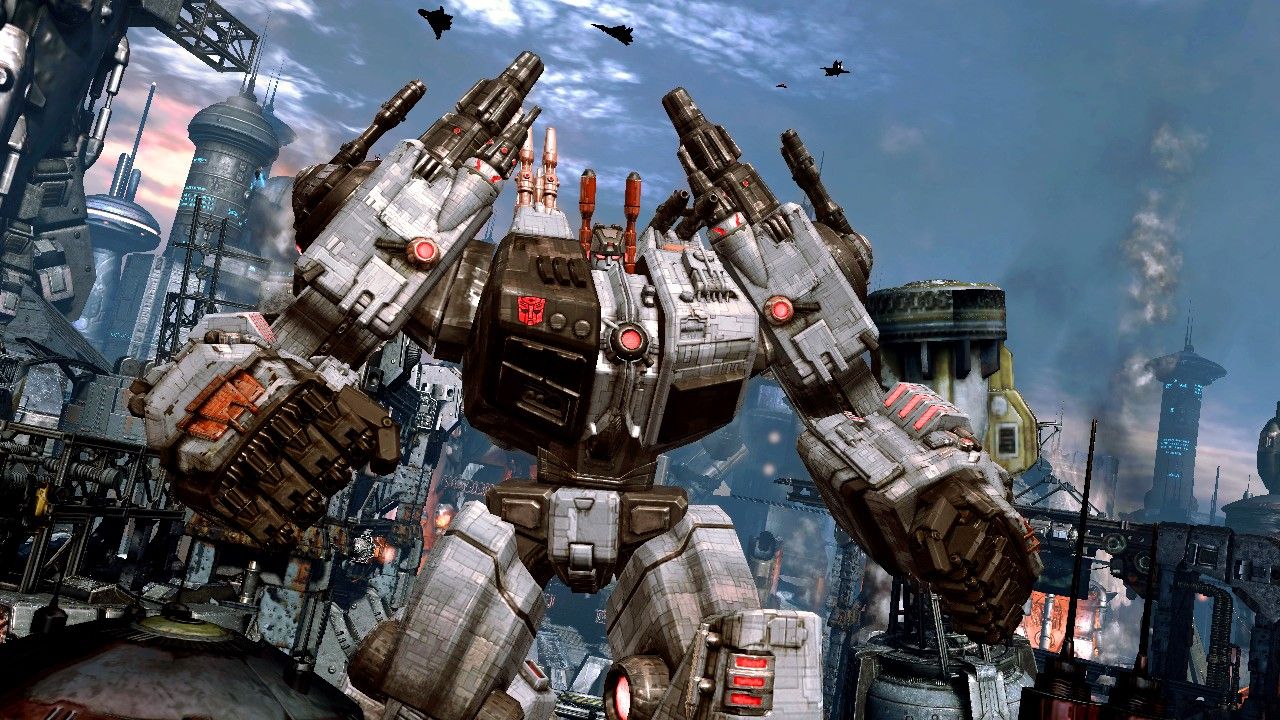 I'm happy to report that there is nothing mediocre about High Moon Studios follow up. Transformers: Fall of Cybertron surpasses what was achieved with War for Cybertron on almost every level. The distinction between a good game, and a good Transformers game doesn't apply anymore. This is just a damn good game.

Fall of Cybertron picks up directly where War for Cybertron left off. The game sees Optimus Prime leading his Autobots in an attempt to leave Cybertron. The war between Autobots and Decepticons has left the Transformer's planet ravaged to the point that it can no longer support Cybertronian life. It's time for the Autobots to find a new home, and any true Transformers fan knows where this road will lead. All the way to Earth.

The beauty of Transformers: Fall of Cybertron is not in the destination though, it's in the events leading up to Earth's first contact with these “Robots in Disguise”. And when I say events, I mean big, awesome to behold, blow your mind, and make your eyeballs bleed events. The big moments in Fall of Cybertron absolutely left me on the edge of my seat, and shape a game that is as much fun to play, as it is to watch. 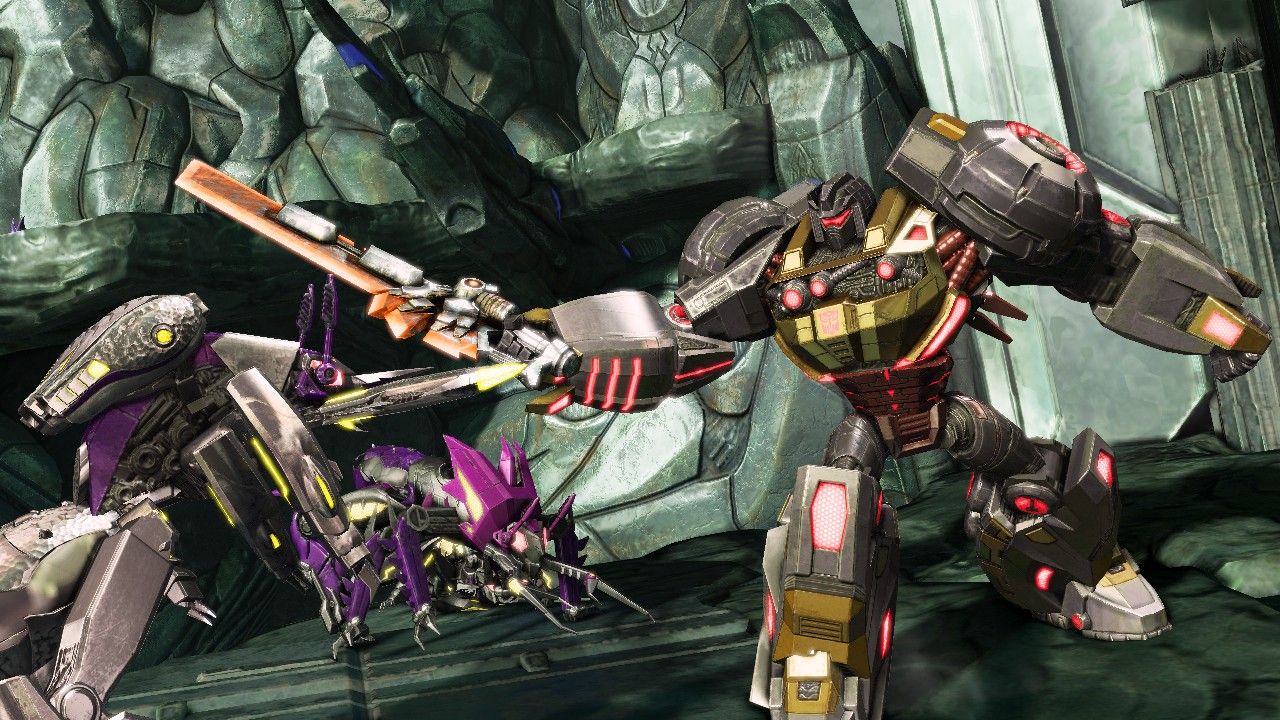 Graphically, Fall of Cybertron looks great. High Moon has done a lot of work to make their Cybertron the definitive version of the Transformers home world. Locations players will visit in their playthrough like the Sea of Rust, or the Insecticon hives go above and beyond any Cybertron we have seen depicted in the past. The level of graphical fidelity extends into the battlefields, which have been opened up quite a bit in comparison to War for Cybertron. The field is constantly littered with bots doing battle, and while I did experience a few stutters here and there, for the most part the game ran smooth as silk. Even when Metroplex, a city sized Autobot, was stomping around in the background. It's a testament to how good High Moon has gotten at squeezing every ounce of power out of the Unreal Engine 3.

The developers have also crafted a much more focused campaign than what we saw in War for Cybertron. This time around, there are no separate campaigns for Autobots and Decepticons. The ability to choose which Transformer you want to play through a chapter with has also been removed. This works in the game’s favor as it allowed High Moon to create gameplay specifically tailored to the Transformer playing through the chapter. Some levels are designed to take advantage of Optimus' ability to control Metroplex, others have Cliffjumper relying on his stealth capabilities, and some just have Grimlock going absolutely ape-sh*t on a bunch of bad-bots. This approach has also let the developers include bigger event set-pieces. This wouldn't have been possible with the interchangeable nature of the bots in the first game.

As 3rd person shooters go, Fall of Cybertron plays much like its predecessor did. That's not to say there haven't been any refinements along the way. Controlling the Transformers in Fall of Cybertron is much smoother, which is good because the game moves at a much faster pace. At times there are so many things going on on-screen, that it is very easy to get overwhelmed and find yourself in a bad place. It is very easy to roll into a Decepticon squad looking for your head as a trophy. The AI seems to have been improved as well. Enemy bots are unrelenting in their attacks, will seek cover, charge, and attempt flanks in order to put an end to your quest. 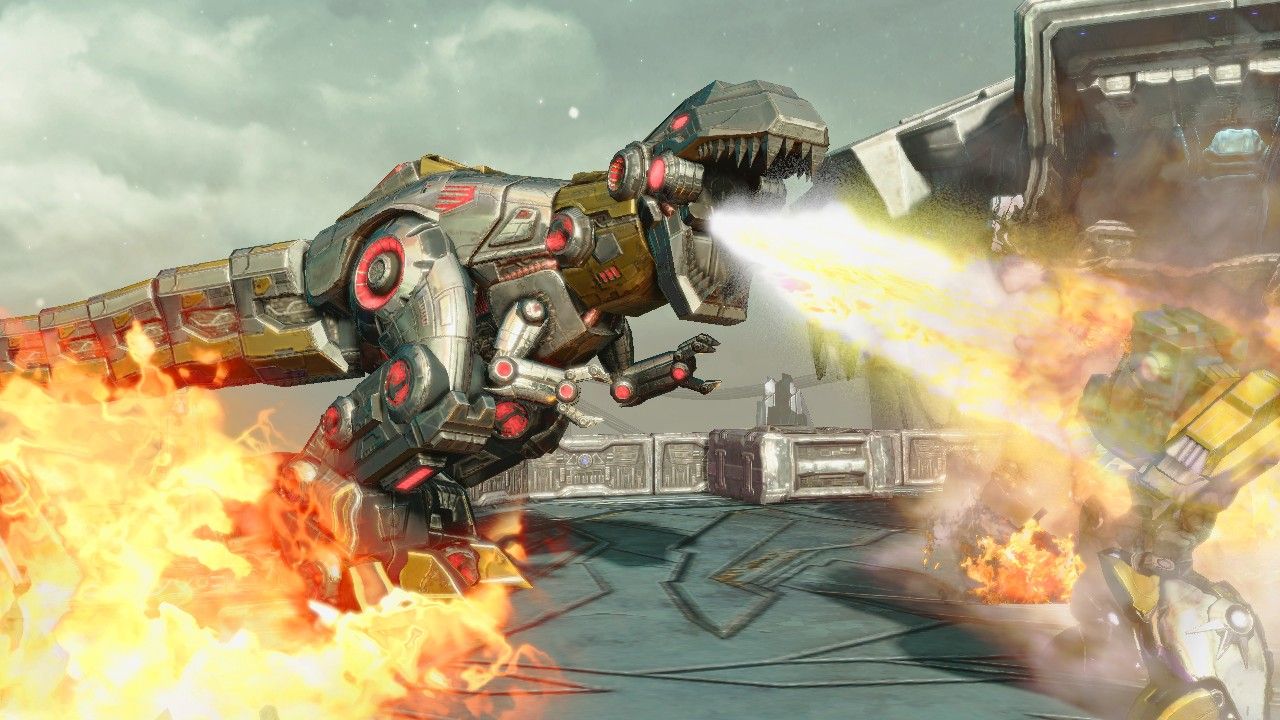 Defeating enemy bots will provide the player with Energon, which they can then use to purchase and upgrade weapons, buy consumable power-ups, or add skill buffs that enhance things like health, armor, damage in vehicle mode, etc. Players can access the upgrade component at various Teletraan-1 terminals throughout the world. High Moon tips its hat to hardcore Transformers fans by having Teletraan-1 greet Optimus Prime as Orion Pax. Orion Pax was Optimus' name before he was rebuilt by Alpha Trion. It's a nice gesture, and shows that High Moon Studios are true fans of the IP.

I do have an issue with how fragile the Transformers are. Wading into multiple enemies will see your shields and health drained away in seconds. This will lead to either a hasty withdraw to cover, or a restart from the last checkpoint. While some could view this as needing to be a bit more strategic in how you approach the game, just once I would have liked to drive into the thick of things as Optimus and opened up a giant can of whoop-ass. The Touch would of course be playing on repeat the whole time. Energon cubes are placed pretty generously throughout the world, so it's not hard to replenish lost shields and health. Still though, I couldn't help but think to myself "Isn't a giant warrior robot supposed to be tougher than this?"

The way the game switched factions almost on the fly was bothersome as well. I really think that High Moon should have just focused on the Autobot campaign, and then possibly released the Decepticon campaign as DLC. It was jarring to be protecting the Arc one minute, and then trying to destroy it the next. Not a huge gripe, but something to look at in the third game. 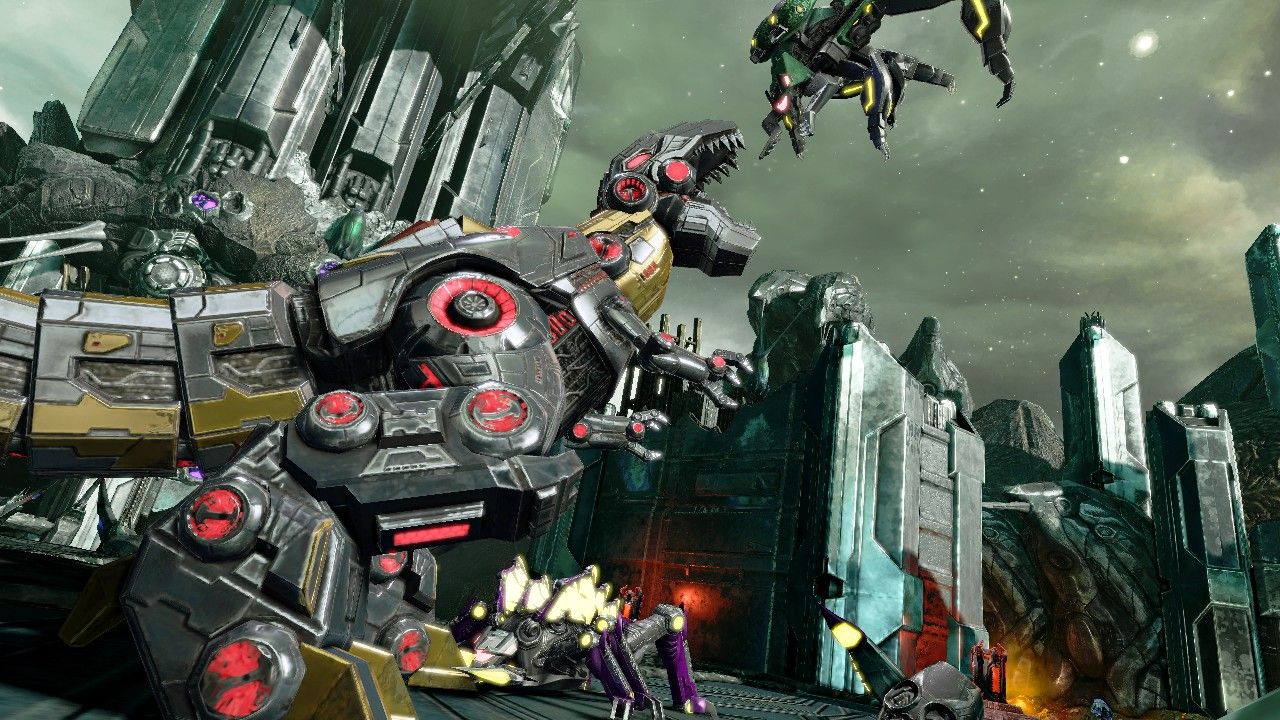 Multiplayer has also been expanded in a big way. Not so much in the actual game mechanics, but in the customization of one’s bot. Players now have the ability to construct their own Transformers using pieces of the bots found in the single player campaign. High Moon has also released some DLC to expand this selection even further. Tinkering with the character creation is fun for a time, but feels somewhat gimped due to there being a limited number of vehicle modes. FoC multiplayer supplies four classes to choose from, Scientist, Infiltrator, Titan, and Destroyer. The Scientist class being the standout as its vehicle mode is a jet. The joy of flight quickly becomes problematic though, as invisible barriers, and negotiating close terrain can become frustrating. The ability to use vehicle mode, while understated in the campaign, is a necessity in multiplayer. It allows players to get back to the action quickly after a re-spawn, as well as fall back quickly if things are getting too hot.

Teamwork is pretty handy in multiplayer modes such as capture the flag, conquest, and even team death match. Unfortunately, the PC version being a port means that no in-game chat is provided. While I don't think the draw of this game is its multiplayer component, it does add some replayability to the title once the 10 hour campaign has been thoroughly trounced.

The best compliment I can give Transformers: Fall of Cybertron is that it's an enjoyable game which fans and non-fans can appreciate. High Moon has established their vision of the Transformers as the definitive version moving forward in my opinion. They've also set the stage for Earth's introduction to these 'Robots in Disguise' in a third game. Is Fall of Cybertron the perfect Transformers game? No. But it does enough right that I walked away wanting more. Really, what more can you ask for?

Our ratings for Transformers: Fall of Cybertron on PC out of 100 (Ratings FAQ)
Presentation
87
High Moon has crafted the definitive version of Cybertron, and proven they are masters with the Unreal Engine 3.
Gameplay
82
3rd person shooting is much improved over War for Cybertron. Levels tailored to a Transformer's specific abilities keeps the gameplay fresh throughout.
Single Player
85
FoC is probably one of the best Transformers stories ever told, but only the truly hardcore fans will commit to multiple playthroughs.
Multiplayer
80
The game's multiplayer is entertaining. It makes the act of transforming a necessity, unlike the campaign. There isn't enough here to keep players invested for the long haul though.
Performance
(Show PC Specs)
CPU: AMD FX8120
GPU: Nvidia 250GTS
RAM: 16GB RAM

87
Fall of Cybertron looks fantastic, even on medium settings with no AA enabled. Players may run into a little slow down, or clipping here and there. It doesn't dampen the overall experience though.
Overall
85
Transformers: Fall of Cybertron surpasses its predecessor on every level. The game's strengths lie in its pacing, storytelling, and High Moon's respect for the source material. FoC might not be the most innovative 3rd person shooter I will play this year, but it is absolutely one of the most memorable. 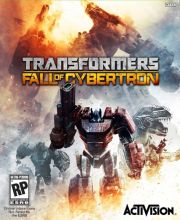 All videos for Transformers: Fall of Cybertron (1)
Advertisement ▼