The Infected, The Walkers, The Living Dead – there’s no shortage of names for our favourite, most diversely interpreted monsters within popular culture these days, and with good reason. Zombies embody an unconscious fear that our society exists on the crumbling brink of an impending catastrophe. They make for the perfect threat on a physical and psychological level, and have been milked as videogame antagonists through various interpretations; from the Resident Evil style shuffling groaners, to the Left 4 Dead rabid sprinters. 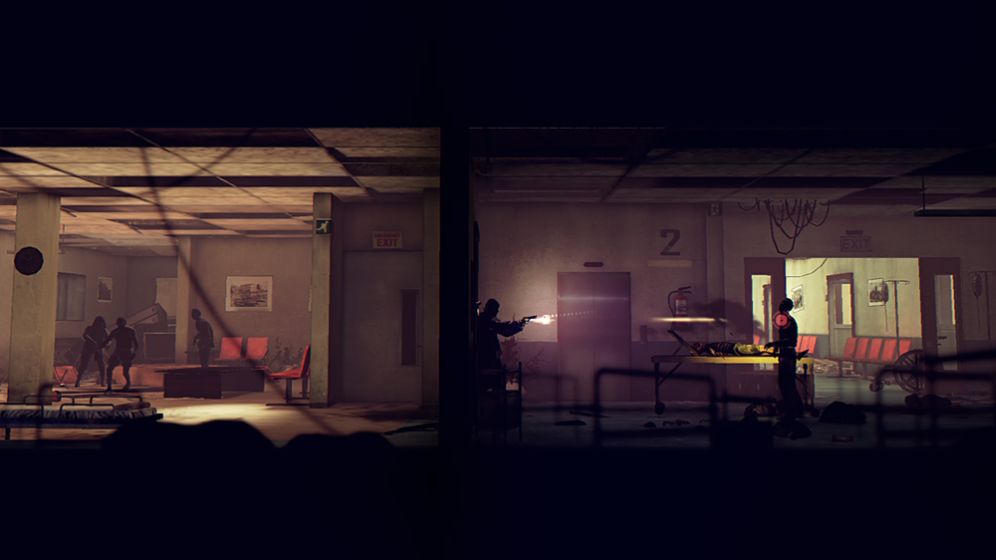 Deadlight’s undead are more the former, and Tequila Works chooses never to give them a name, simply referring to them as ‘Shadows’ in loose reference. The lack of a moniker is a conscious decision by Tequila Works, perhaps one made to differentiate themselves from the mindless droves of comparable games. But Deadlight never comfortably finds a niche of its own, with most of its design reminiscent of other 2D downloadable titles, such as Limbo and Shadow Complex.

In visual terms that comparison is quite literal. Deadlight carries the three-dimensional graphical sheen of an Unreal Engine game, with a shadowy blanket silhouetting any detail or colour within the foreground, and it looks fantastic, a suitably dreary aesthetic that fits the macabre sense of desolation of the apocalyptic world around you.

Set in a ruined mid-80’s Seattle, It’s an interesting, meticulously detailed slice of alternative recent history, with environments of collapsed architecture ranging from deserted leafy suburbs to half-collapsed inner-city skyscrapers and trap laden sewers. The crumbling dilapidation of the background conveys a bleak atmosphere, and fits well with its aesthetic design, with a few quirky nods referencing the era thrown in for good measure.

Deadlight’s sombre ambiance and tone is comparable to that of The Walking Dead, never shying your view from the grim realities of the situation. But whilst it has strengths in ambiance and world setting, its narrative is something of a ham-fisted affair, with our protagonist Randall Wayne possessing all the charm and characterization of a turnip. 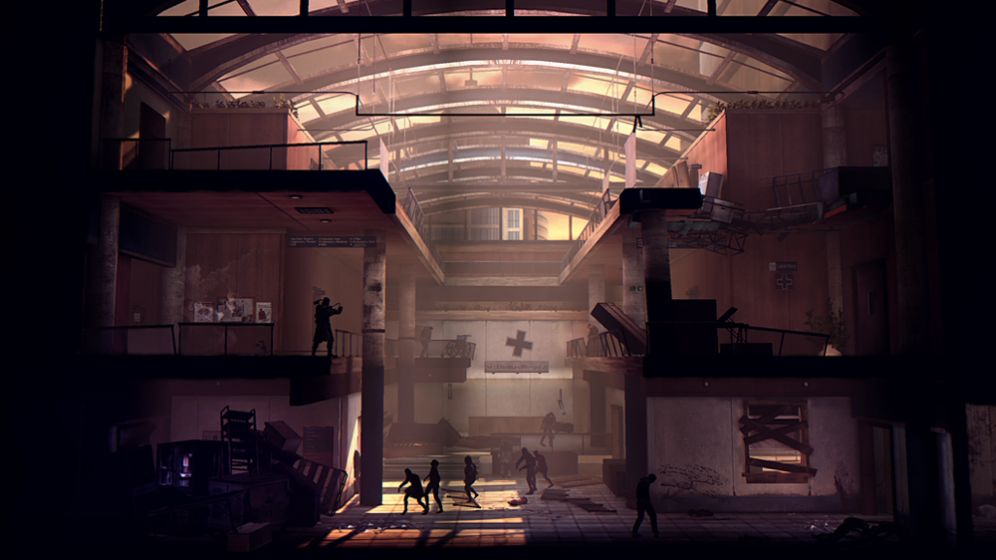 An ex park ranger, Randall is searching for his wife, child and missing diary pages, and must travel straight from left to right, and occasionally up and down, to find them. Possibly driven by the events surrounding him our protagonist is partial to the odd bit of pompous philosophizing – “What we call darkness is the light we can’t see” – and is voiced with the overly dramatic and oddly calm inflection of a theater performer, an odd characterization considering his circumstance.

The progression of events deals with Randall’s psychological states in other ways as well, with playable pre-apocalypse flashbacks dreadfully over-signalling Deadlight’s closing twist throughout. And there isn’t anything here to set it apart from any other zombie games of late, except the odd philosophical murmuring.

Surprisingly Deadlight has its gameplay roots in the platforming genre as much as any other, with Prince of Persia style wall jumping, sprinting leaps and vertical traversal playing a far more prominent role than any weapon. It’s fairly smooth but centred around a sluggish, lethargic core of gameplay and control: all inputs have a significant lag time and it’s hard to tell whether this is a deliberate design choice employed to convey a feeling of weakness against the zombie horde, or a technical failing. Regardless, it soon becomes terribly frustrating, and leads to a number of unfair deaths.

There’s also some short, not-too-taxing puzzles, made of the drag block, push lever, un-electrocute floor components, the likes of which have been done far more inventively elsewhere before. Had the presence of zombies been a more threating one, these sequences could have provided some great moments of tension as you struggled to keep back the advancing horde, and complete the task at hand. 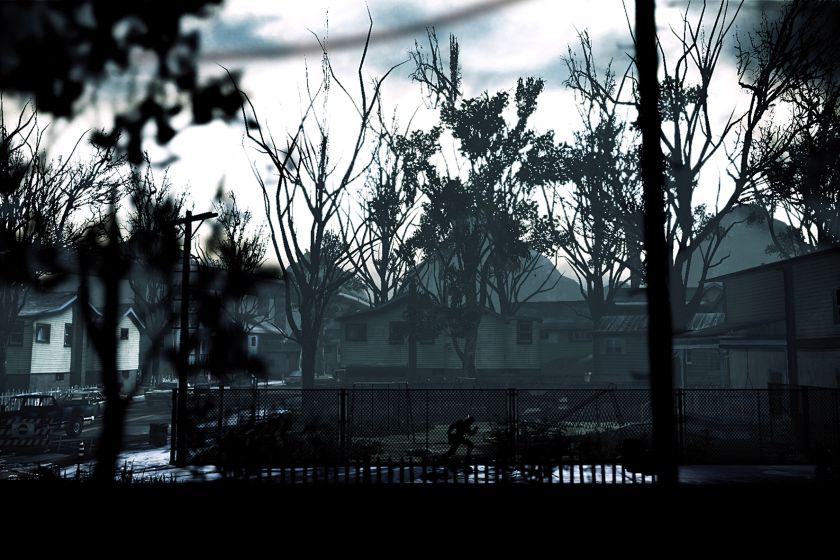 That’s the biggest problem with Deadlight’s Shadows. They’re present in numbers enough to look imposing, which they initially are, but their advance rarely poses a threat to Randall once you acquire weaponry, regardless of the situation. A few axe swings quickly disperses a crowd, and even though an I Am Alive-style stamina meter depletes as you perform any physical action, its replenishment is balanced such that you’ll rarely succumb to fatigue during combat. Gunplay takes a backseat most of the time, with ammo being an intentional rarity, and it works well with the right-stick and trigger combination outlined by a dotted line of fire, allowing a level of precision vital for conservation.

A few interesting scenarios are built around your ability to call the zombies, drawing them to areas of environmental hazards, whilst you observe their mindless suicide before you can progress. But these moments are few and far between, and compounded by a lengthy underground mid-section in which pacing goes out of the window, with frustrating levels of trial-and-error platforming design, more akin to Canabalt than any kind of Limbo style logical puzzle solving.

There’s a similar frustration that persists during a couple of chase sequences, which are too reliant upon reflexes and timing, and therefore stagnate due to Deadlight’s lacklustre controls. One such helicopter chase had me fling myself off multiple rooftops to a kill screen countless times, sometimes out of bad timing and sometimes from confusion regarding the unintuitive route of safety.

Deadlight’s cocktail of 2D platforming, puzzling, gunplay and zombies may not excel in any particular area then, but it does a decent job of replicating the successes of the games it borrows from, and the blend is an entertaining and brilliantly atmospheric one as a whole, if fairly slight at around 4-5 hours. 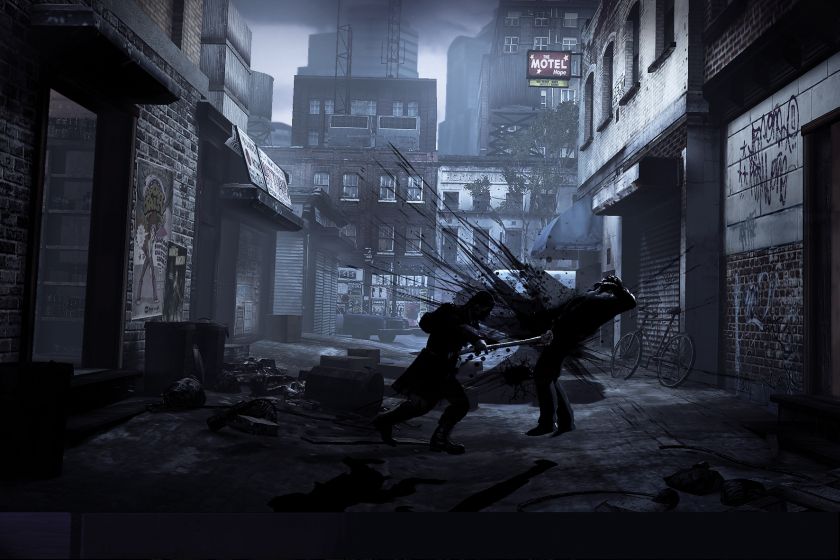 It’s the terribly sluggish controls, contrived storytelling and lack of interesting zombie-based gameplay scenarios that hold it back. Tequila Works clearly intended to employ these Shadows as an allegorical symbolism for our protagonist’s fractured psyche. But having failed to utilize them in enough interesting situations, the timeworn zombie swarm remains a rottingly lifeless presence rather than a refreshingly involving threat.

Our ratings for Deadlight on Xbox 360 out of 100 (Ratings FAQ)
Presentation
80
Deadlight's 3D side-scrolling silhouetted look works well at creating a dreary atmosphere, and adds to a fittingly apocalyptic, well detailed environment.
Gameplay
60
An interesting combination of gameplay elements ranges from rooftop platforming chase sequences, to close quarter's shoot-outs. Unresponsive controls, a lack of refinement, and few interesting uses of the zombie horde let it down.
Single Player
60
Randall Wayne's not the best protagonist to spend 4-5 hours with, and his story soon becomes too contrived after an interesting opening. Still there's a decent, if flawed mix of gameplay elements throughout.
Multiplayer
NR
None
Performance
80
Very rare technical hiccup's with the framerate and pop-in occur, but this is a perfectly solid package as far as performance goes.
Overall
60
It's the instances of frustratingly poor design that really sour the experience of Deadlight, and there's nothing here that really differentiates it from its numerous sources of inspiration. Still, as far as the over-saturated market of zombie games goes, Deadlight really is a beautiful apocalypse to explore, nailing the tone and feeling of its place, time and scenario. 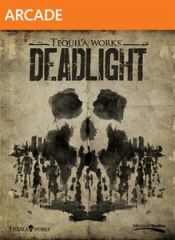 Our Review of Deadlight
60%
Adequate
The Verdict:
"An interesting visual design masks sluggish controls and a boring narrative"
Game Ranking
Deadlight is ranked #1390 out of 1646 total reviewed games. It is ranked #125 out of 145 games reviewed in 2012.
1389. Alienation
PlayStation 4
1390. Deadlight