Penumbra Black Plague sets you on a meld of mind games and puzzle solving with a tender amount of horror thrown in.

Black Plague is a short game, but it's a good game. The basic premise involves you in search for your father in an underground facility, located in Greenland, known as The Shelter. However things have gone bad, an infection has broken out and people are not what they once were. The game does a good job and creating perceived action and tension without actually showing it directly and the same is true for the character you find alive, asking you to rescue her via voice communication.
The game is mostly a series of puzzles, using a combination of items you find together along with a series of physics orientated tricks to get you out of rooms or into secure areas. The puzzles are extremely logical, the hardest parts usually involve finding the various pieces, and often you'll know exactly what you need. The game breaks up some of this puzzle solving with horror sections and usually these involve you being defenceless running away from something horrible. They don't last too long, and aren't as much of a threat as first thought, as you can outrun most of them but they create some creepy moments. The game also introduces some confusing visual elements during the later part of the game, most are very well done and can be quite shocking to the system. The game does feature some decent voice work from certain characters, especially the character that is closest to you. The text is good enough to convey the story and help you solve puzzles easily enough.
The game features a full dynamic lighting system similar to Doom 3, graphically it's a bit dated and rooms can be a bit bland. The game's main feature is how you interact with the world, your mouse cursor acts like a hand you can reach out to pick up objects, drag objects, turn on objects, and swing doors and levers, quite a good system overall but under utilized. The majority of puzzles are probably too easy and aside from the end puzzles there aren't many that make you think a bit more outside the box or use the combined physics system well enough. The game can be completed in about 4 hours making it a little short, but it retails for only $20. It's a testament that this game was created with just a handful of developers when mega corporations create abominations of generic trash with teams of hundreds or more, do yourself a favour and step back in time to see where cool ideas came from.
Our ratings for Penumbra: Black Plague on PC out of 100 (Ratings FAQ)
Presentation
70
Game isn't amazing looking. For a small team though it's a pretty good effort, the dynamic shadows adds to the game.
Gameplay
81
Lots of puzzle solving with some chase / stealth scenes thrown in for good measure. Puzzles could have been harder.
Single Player
77
Interesting story, from a small team I think it's a good effort and the voice actors aren't too bad.
Multiplayer
NR
No multiplayer
Performance
(Show PC Specs)
CPU: AMD Athlon AM2 5600+ @ 2.9GHz
GPU: Powercolor Radeon x2900xt 512MB
RAM: 4GB DDR2
OS: Windows Vista 32-bit

80
Runs pretty well because it's not doing anything crazy.
Overall
73
A game that will not be for everybody, short in length but has some good logical puzzles and flows reasonably well. 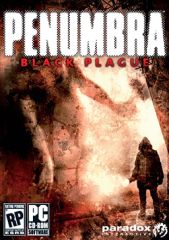