In Call of Juarez you play as two characters, Reverend Ray and Billy Candle. For the majority of the game the former is out to get latter after a violent incident and a misunderstanding. This is reflected by numerous chase scenes and in game cut scenes. Ray will cite religious verses during the game, voiced superbly they add a special style to gunfights, you can cite your own during fights. Ray is the master of weapons, he can slow time with dual pistols in focus mode to take out multiple enemies as two crosshairs move towards the center of the screen, he also has heavy armor so can withstand some damage.
Billy however is not armoured and can die quickly. He has a bow that he can also use in slow motion to shoot opponents. His episodes feature some stealth sections, such as getting yourself inside a shack without being spotted by a civilian, once spotted your position is reset for another attempt. Fortunately there aren’t many of these in the DirectX 10 version, and they are fairly easy. There are also semi-stealth mission where Billy can use his bow from a distance and pick off bad guys, keeping himself hidden, or he can run in and engage in pure action but his health will drop pretty fast. Billy also has a whip to swing on branches and climb up or across ledges for the platforming segments, although you will need to wait and point exactly at the branch, which removes some fluidity.
The graphic engine behind COJ is quite impressive; especially now when you can get a PC that will run it maxed, somewhat less likely 1.5 years ago. Effects, draw distances, characters and foliage are not far behind Crysis. Although many of the earlier missions don’t seem to use the huge scale engine as well as the later open level missions, this was probably done to control players and show them more detail before letting them roam more freely. AI is quite competent in battle, they don’t stay still, they move to cover, and move about to get a good shot at you if you are hidden. Some respawns aren’t hidden well enough, when you trigger a zone enemies might just appear in front of you, in general it’s not a detriment to gameplay.
The game doesn’t save often in some sections, but quicksave is readily available for abuse. Enemies will drop health pickups when you are closer to death so segments won’t get ridiculously hard as long as you pick these up often. The gunplay is very good, a few gimmicks like slowing time, quick shooting and real bullet projectiles add to the feeling. You will also engage in a few stand offs, using your mouse to draw a pistol and fire it before you get shot while in a stationary position. Gunfights on horseback are done pretty well in the first person view, increasing the pace of the game briefly. The game paces action, stealth and character split segments well. The placement of ammo and weapons will encourage the use of different weapons and you won’t be traversing the same sections much even though one character is hot on the heels of the other.
Call of Juarez seems to be quite underrated in the first person genre, it’s a bit of a refreshing setting, has some good gunplay elements preventing mediocre status. It has an enjoyable story and engaging characters. There are no long, tedious segments and one can quite easily play continuously without getting tired.
Our ratings for Call of Juarez on PC out of 100 (Ratings FAQ)
Presentation
83
One of the better looking games on the PC platform, looks pretty amazing under Direct X 10 mode, characters also look particularly good even if they are recycled.
Gameplay
79
Has some nifty gunplay tricks such as slowing time and mixes in a few sections of stealth. Some strange enemy spawning spots
Single Player
81
Wonderful voice work from Ray to tell the story and convey emotion into the tale. You want to know what happens to the characters.
Multiplayer
NR
Not tested.
Performance
(Show PC Specs)
CPU: AMD Athlon AM2 5600+ @ 2.9GHz
GPU: Powercolor Radeon x2900xt 512MB
RAM: 4GB DDR2
OS: Windows Vista 32-bit

80
When released Call of Juarez took a huge effort to run well, but today it runs fairly well and only has some minor bugs.
Overall
78
Underrated game in general, it features some solid pld west action with a solid story in a very presentable environment. 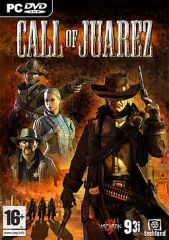 Our Review of Call of Juarez
78%
Good
The Verdict:
"Interesting gunplay elements, impressive graphics and healthy variety"
Game Ranking
Call of Juarez is ranked #570 out of 1739 total reviewed games. It is ranked #11 out of 13 games reviewed in 2007.
569. Hot Wheels Unleashed
PC
570. Call of Juarez