At the E3 that was quite full of sequels, Dishonored for Arkane Studios and Bethsda Softworks stood out as one of the few original IPs. Set in a steampunk world, players took on the role of a supernatural assassin, bent on revenge after being framed for a murder he did not commit. Utilizing specially designed weapons and your abilities, the game is based around a series of assassinations in the city. We got a chance to see the game, as well as play through a level, and things look promising.
Dishonored is a first person action game, that’s focused on stealth and story. You are an assassin with super powers, per say, who was falsely accused of killing the person you were supposed to protect. Players find themselves in a steampunk themed city, that’s being taken over by a tyrannical ruler, as they seek revenge. As mentioned, Dishonored is a series of assassination missions, each with their own unique feel from both visual and level design perspectives. Developers have confirmed that the whole game can be completed without killing anyone – even your targets, though this kind of playthrough will result in a rather grim end-game. 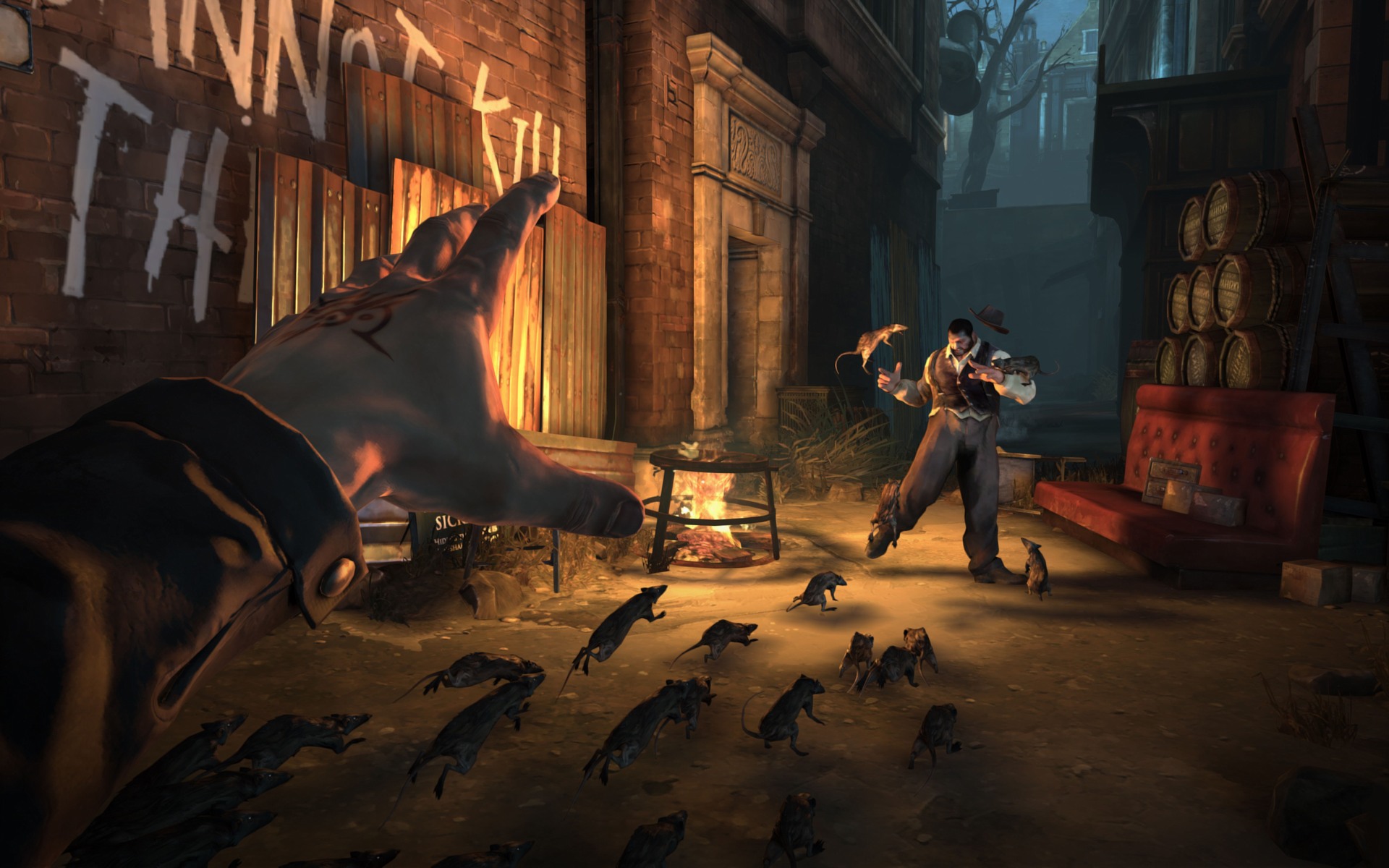 In the demo being shown, we had to kill two corrupt government officials who were in a local Bathhouse. The first attempt at the mission was focused on stealth, so we knocked out some helpless guards and hid the bodies. With the front entrance being thoroughly patrolled, we used our short-range teleport ability in order to reach the roof of the building. The developers commented that vertical gameplay will always be a viable option, prompting players to explore the environment and giving the freedom to go anywhere in the level, rather than using a linear path. To gain entrance into the house, we used our power of possession to take over the mind of a fish, and swam our way into the shower drain area, where we re-appeared.
Using another ability which allowed us to see through walls and also peeking through a keyhole, we identified the enemies in the area as well as their vision cones. Because the targets are often randomly placed in a level, we had to eavesdrop on some guards in order to get a hint for where we should head. To gain access to a restricted area, we snuck up on the lady of the house and pick pocketed the keys off her (option to kill or knock out was also available). We continued to teleport around guards from cover to cover, reaching our first target. 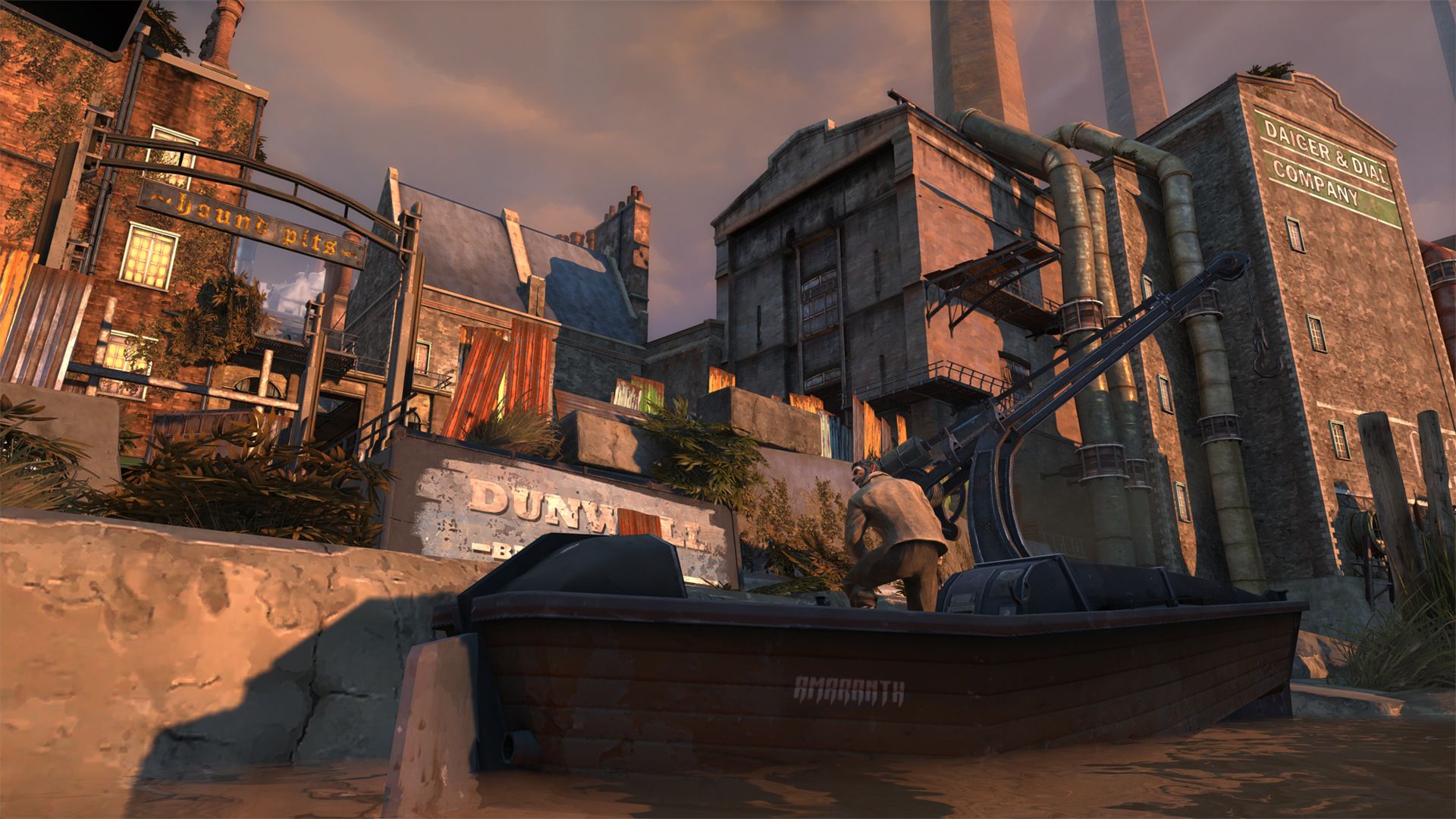 He was conveniently relaxing inside of a steam room. We could have gone in guns blazing, but instead opted to visit the next room and crank the steam valve, essentially killing the poor man in the next room. Our next target was nearby as well, but he was taken care of in a more creative manner. For the purposes of the demo, our powers were upgraded to the highest level, so we could actually take possession of our target. So, we walked him to the balcony, re-appeared behind him, and used our windgust power to throw him over the edge. For our escape, we could not survive the jump down from the building, so instead we possessed the bystander on the ground to break our fall, and walked off to safety.
12Next

Our Review of Dishonored
88%
Great
Reviewed on PC
"An uninspired narrative is overshadowed by a compelling setting and flexible gameplay in this excellent stealth action hybrid"
Game Ranking
Dishonored (PC) is ranked #63 out of 1646 total reviewed games. It is ranked #7 out of 145 games reviewed in 2012.
62. Total War: Shogun 2 - Fall of the Samurai
PC
63. Dishonored

All videos for Dishonored (4)
Advertisement ▼