Commandos 2 puts you in control of a team of highly trained and varied squad members. The commandos in your squad have a different set of abilities which changes how you can use each of them, e.g. the spy can use officer uniforms to distract soldiers while the green beret can bury himself and lie in wait for an ambush. These differences will often promote the coordination of several members to complete objectives. Not only does your team have variation but the large levels you face are very open and also contain secondary objectives. Certain objectives like rescuing sailors must be completed but how you go about getting to them is up to you. The commando movements are controlled in an isometric view that can be zoomed in and out. Most of the level design is high quality with wildlife and plenty of natural cover. Being able to sneak a peek into a window and see a patrolling guard in 3D before making an entrance is most satisfying, same goes for setting off traps.
The gameplay itself may break down into you sneaking under cover and passed the vision “cones” of the enemy, or maybe stabbing enemies from the back might be more satisfying. Grenades and rifles could be more your style but prepare yourself as although the quickest this is the hardest way to complete the missions. There are even more challenges when it comes to dealing with the enemy bodies. A gagged soldier is not going anywhere but should another stumble upon him he will be freed and you now have two angry patrolling guards destroying your hard work. Shooting will often alert nearby guards and dead bodies lying around will prompt others to search the area more thoroughly. The game is challenging and it requires good decision making which you will learn during the game, not noticing a lone solider could mean mission end when 10 enemy soldiers come rushing towards you as alarm bells ring out. The game does reward patience and a bit of forethought as many will soon realize, but quick save will be used frequently. The learning curve for the game and each level feels right although starting from scratch can be quite hard.
There are cut scenes between missions which are actually very nicely done in pre-rendered cg and they link missions together, the art for each of the levels is high and the game looks fairly good for an old title. The game also has it’s share of funny moments due to the dynamic gameplay, varying from fleeing naked soldiers, nazis getting worried over noisy penguins and luring Japanese soldiers into the jaws of crocodiles. Commandos 2 may be almost 6 years old but that doesn’t prevent it from being an enjoyable strategy game.
Our ratings for Commandos 2: Men of Courage on PC out of 100 (Ratings FAQ)
Presentation
92
Great attention to detail for all the maps, the backgrounds are amazing even today.
Gameplay
89
Superb strategy game that relies on using all your commandos carefully and timing your moves to perfection.
Single Player
91
Lengthy single player campaign taking you over a variety of missions.
Multiplayer
NR
No Multiplayer
Performance
(Show PC Specs)
CPU: AMD Athlon AM2 5600+ @ 2.9GHz
GPU: Powercolor Radeon x2900xt 512MB
RAM: 4GB DDR2
OS: Windows Vista 32-bit

86
Runs well for and old game as expected, pity you can't scale the resolution up.
Overall
88
Amazing strategy game that can be one of the most rewarding gaming experiences on the PC. 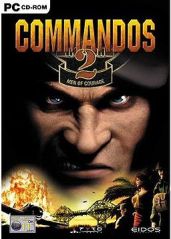