An enjoyable and original fighting game

Skullgirls is the first all-original fighting game that was made for the downloadable market. With the Playstation Network and Xbox Live services usually regulated for ports of older fighting games like Third Strike and Marvel Vs Capcom 2, one has admire Reverge Studios' ambition. At its budget price of $15 dollars there are obvious cutbacks such as a smaller character roster (eight characters to be exact), and limited single player modes. If you can accept that you get less content for a cheaper price and pay attention to what really makes Skullgirls great, you'll find that this smaller title outdoes its bigger counterparts in a number of ways. 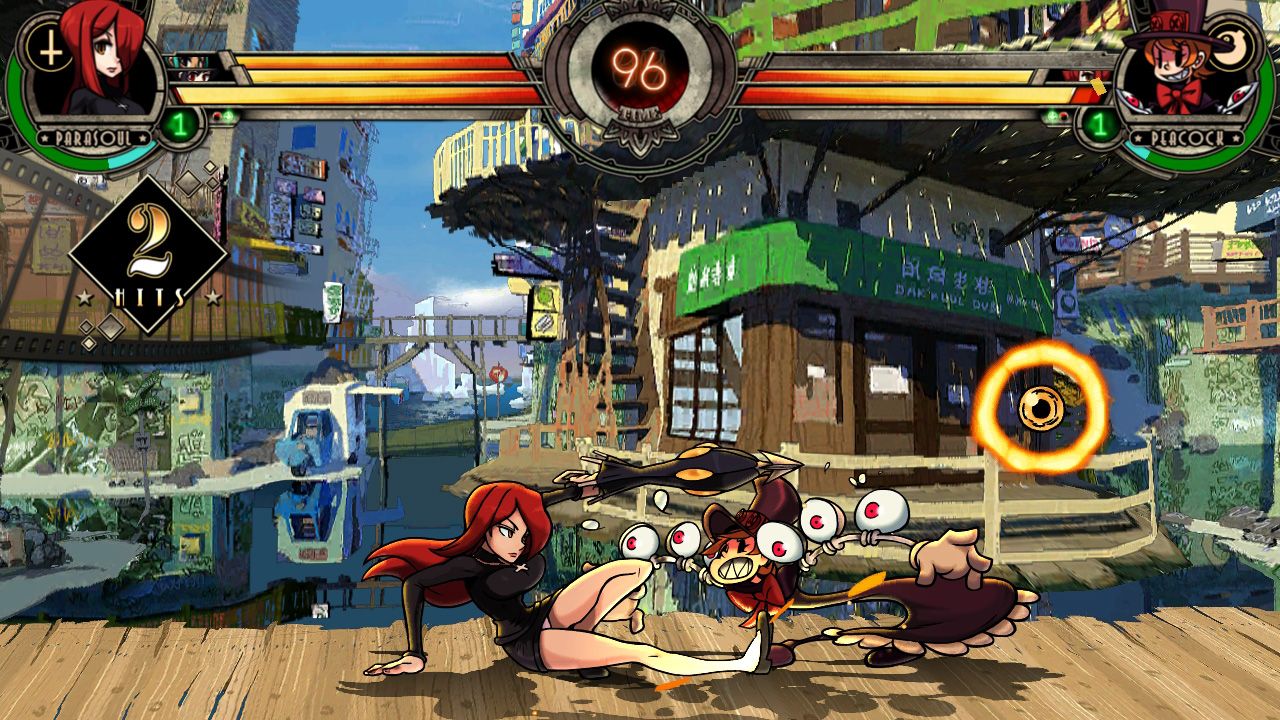 It's almost impossible to talk about Skullgirls without discussing the art in the game. Being a stylistic take on the 50's/60's era of cartoons, there's much to love about each and every frame. And while many players can (and have) ignore all this and instead focus on the fact that all the characters are females with above average breasts, they would be foolish to do so. While you can knock Reverge, and say that their decision to endow their cast in such a way was only a shameless attempt to appeal to their audience, that would be doing a major disservice to the work as a whole.

Just look at a character like Peacock, a wisecracking girl armed with a versatile array of powerful weaponry. One of Peacock's moves is that she drops a heavy item on you, which changes based on how long you hold down the button before you release it. These items are almost all fan service, ranging from Cloud's Buster sword from FF7, to Mario's Kuribo Shoe from Super Mario Bros. 3. This is just one of the many ways that Skullgirls plays to its fans outside of brazen sexuality. 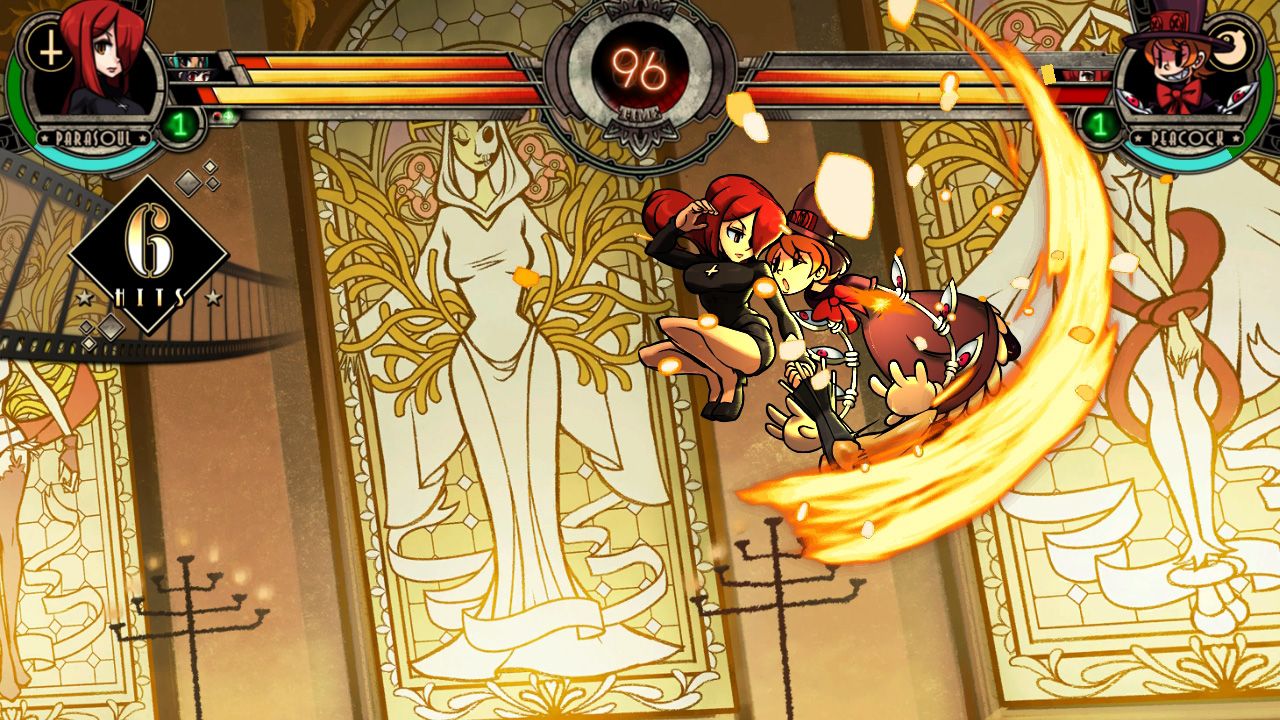 So the game looks great which is all and well, but what really matters is: how does it play? Well I'm glad to say that the game plays just as well as it looks, and if I had to compare it to other games I would say Skullgirls feels like a mashup between Marvel Vs Capcom 2 and Guilty Gear. At the start of each match you choose how many characters you would like to use from one to three. The fewer characters you choose to use, the more damage and health points each of them will have. While one might think that only using one super powerful character may be the best plan of attack, they would be mistaken. For you see, each character that currently isn't fighting can perform an assist attack from the sidelines, and some of these can be devastating at keeping your opponent locked down. Not to say that using only one character is ineffective, it's just not as overpowered as one might think.

Earlier I mentioned that Skullgirls didn't have as many modes that one would be used to from retail releases, but that doesn't mean it's completely lacking. Single player consists of a story mode in which you fight through a small gamete of characters, with the occasional cutscene and a short ending. There's a training mode, which in my opinion is the most offensive of the exclusions made by Reverge Studios. Many of the basic and essential features of the usual fighting game training mode are missing, such as programming the AI dummy to start blocking once you drop a combo. This absence makes practicing combos much harder than it needs to be, and at times it can be downright infuriating. 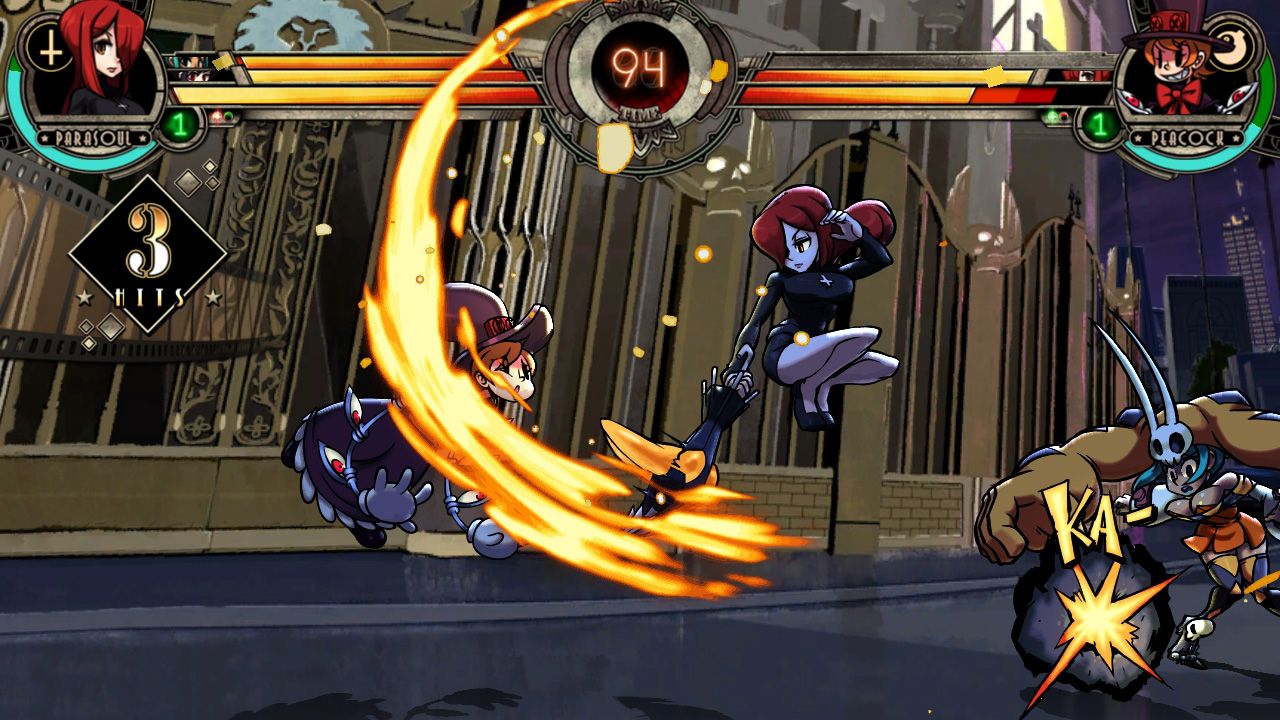 Another feature that’s missing is move lists for each character, which isn’t as a big of deal in this day and age as it once was. With all the characters' moves posted on the official Skullgirls website, and with practically everyone having an internet connection this is not much more than a minor inconvenience that will be dealt with come the first title update. Fortunately for those of us who like to take our skills online, Skullgirls features the finest online in a fighter to date. Making use of the GGPO system to provide a lagless experience that makes the $60 competitors look like a joke.

For $15 Skullgirls is an amazing value. In fact, with a few more characters and more fleshed out single players modes, I would have no qualms paying full price for the title. The game is balanced, looks great, and absent of the issues and glitches that plague many disc based games. Even if you're new to fighting games I would recommend giving Skullgirls a shot, as it features the most comprehensive tutorial to date, teaching the player like a real person and treating them as such. The tutorial teaches the fundamentals of the genre and gives a basic understanding of the system when it would've otherwise taken a newcomer countless hours to learn. The tutorial is just one of the other ways that Skullgirls exceeds, with its charming art, exciting gameplay, and near flawless online play, all coming together to create a solid title.

Our ratings for Skullgirls on Xbox 360 out of 100 (Ratings FAQ)
Presentation
95
Skullgirls looks sleek from top to bottom, with the menus being easy to navigate as characters are on the eyes.
Gameplay
82
Fast paced and Hype inducing, Skullsgirls is not likely to disappoint anyone who tries it. Tutorials included are excellent, but training mode not so much.
Single Player
50
A lackluster story mode and a barely serviceable training mode make this the obvious weak point of the game. But Single Player content shouldn't be why you're here.
Multiplayer
90
Best online in a fighter to date, and versus mode will keep you fighting against your friends into the whee hours of the morning.
Performance
80
Some slightly sluggish loading times and slowdown against the final boss, but otherwise the game runs smoothly.
Overall
80
Skullgirls isn't a game that should be missed by anyone who enjoys fighters, nor should anyone looking to get into them should pass it up. With one of the best online modes found in a fighter to date, this game is well worth your money.

Our Review of Skullgirls
80%
Great
The Verdict:
"An enjoyable and original fighting game"
Game Ranking
Skullgirls is ranked #461 out of 1787 total reviewed games. It is ranked #51 out of 145 games reviewed in 2012.
460. PlayStation All-Stars
PlayStation 3
461. Skullgirls