If however you are happy with a 5 hour intense and nicely varied single player campaign that will be similar to previous Call of Duty games then you need read no further, the game is for you. If you never really liked Call of Duty and the way it structures the single player then you will need to make a bigger decision. Do you want to play multiplayer? If the answer is no then look elsewhere for a game of better value and come back to this one later when it drops in price.

The single player in this game will often consist of you shooting down a horde of respawning enemies until you have killed them all. They will respawn in windows, respawn on rooftops, respawn around corners-you name it they will respawn from it. Then once you cleaned an area up, the commonly used open-door animation will let you progress to the next area. There is devolution of the single player first person shooter experience here. In fact there are very few unique experiences to be had, The points of player uniqueness come from choosing a weapon from a dead soldier and shooting a soldier in the legs, head or torso or maybe throwing a grenade at them. There are a few areas in the game where you can move from point a to point b around a different piece of rubble or clear a house before another, but you’re AI friends will be right behind you anyway so it won’t feel much different.

So that paints a pretty negative picture, but it needn’t be, as I have found out people really love this style of gaming, it’s straightforward and it’s like an interactive movie. You just find cover, do what you’re told and shoot stuff, simple. Its well put together from start to finish, has some nice varied missions, does some great scripted pieces and keeps good pace.

For multiplayer, take Battlefield 2, shrink the maps down to Counter-strike: Source size, remove the commander, vehicles and give everybody the ability to call an airstrike or helicopter for support based on their kill streak and you have COD 4 mp in a nutshell. One of the biggest things here though is the customisation. You can choose weapon load outs along with grenade types, camo for your weapon and most importantly a series of perks. As the name indicates you can pick a limited number of these, which may increase your health, drop a grenade on your death, or make you more accurate just to name a few. None of these perks seem overly powerful but they just allow you to work with your own play style better and helps extend the life of multiplayer by changing things up both for you and for enemies you encounter. As you gain points you rank up and unlock extra weapons/perks and challenges.

The multiplayer has a large downside though, and its directly related to the player count or map size. Quite frankly there are too many players in most of the maps. 32 player servers are spam fests due to the size of most maps, constant airstrikes and helicopters are called in. This rapidly degenerates the gameplay and even without these powers there is very little downtime or waiting, you will die too fast. I strongly urge you to avoid most large servers for this reason.

The deathmatch spawn system places you near a friendly soldier, which is great, it also means that in general the map flows around in a circular motion when one team pushes in one direction more players continue to spawn thus overwhelming the other force. This absolutely maximizes the maps, you will see every bit of it and from different sides which is great way of learning it. It also greatly extends satisfaction when you manage to bypass enemy lines and come in to attack them from behind, getting yourself a 10 kill streak and unleashing hell.

There are quite a few multiplayer modes, albeit sometimes only slight variations on others. Defusal scenarios where one team goes for one of two targets, and another where both teams fight over a single bomb. Headquarters is just a moving base of defense netting the team points per second when it holds control. The modes aren’t new but they are well implemented. The game is well polished, especially on the multiplayer side and runs like a dream, features some good voice work, great netcode and some great multiplayer modes even if some of the maps struggle to use them to the fullest.

Our ratings for Call of Duty 4: Modern Warfare on PC out of 100 (Ratings FAQ)
Presentation
87
Looks fantastic in motion, all the effects and weapons are amazing. Character animation is brilliant.
Gameplay
83
It can get quite repetitive during the campaign, lots of unnecessary respawning enemies coming from windows. Guns all handle really well and won't get lost much.
Single Player
74
Very much on-a-rails shooter, keeps everything in pristine working order so you get the exact experience they expect you to get. Sadly too many houses that spawn a good dozen soldiers who pop into windows.
Multiplayer
88
Rewarding multiplayer, allowing you to level up and earn rewards. Customised load outs to suit your needs although some feel more powerful than others. Great collection of maps and amazing netcode.
Performance
(Show PC Specs)
CPU: AMD Athlon AM2 5600+ @ 2.9GHz
GPU: Powercolor Radeon x2900xt 512MB
RAM: 4GB DDR2
OS: Windows Vista 32-bit

93
Not only does COD 4 look great but it runs smooth without crashes or freezes, You can get some really good framerates on older machines.
Overall
85
I didn't enjoy the single player due to the spawning issues among other things. The multiplayer however is amazing, it's fast paced, rewards high skill and is put together in an amazing package. 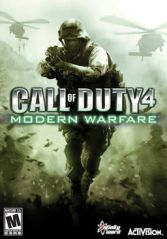