"Reality is perception, perception is subjective" muses a character in FEZ’s opening village. Right from the outset Polytron’s idiosyncratic puzzle-platformer debut makes its thematic underpinnings perfectly clear. FEZ is a game about shifting paradigms, specifically, that of the perceived relationship between 2 and 3 dimensional space. But even more so FEZ is a love letter to the history of videogames themselves, looking back with a nostalgic eye for the unfettered simplicity and joyful discovery of those pre-3D designs, and nurturing them into that 3rd dimension more naturally than the 90’s ever did. In many ways FEZ feels like a missing link in the evolutionary history of videogames. 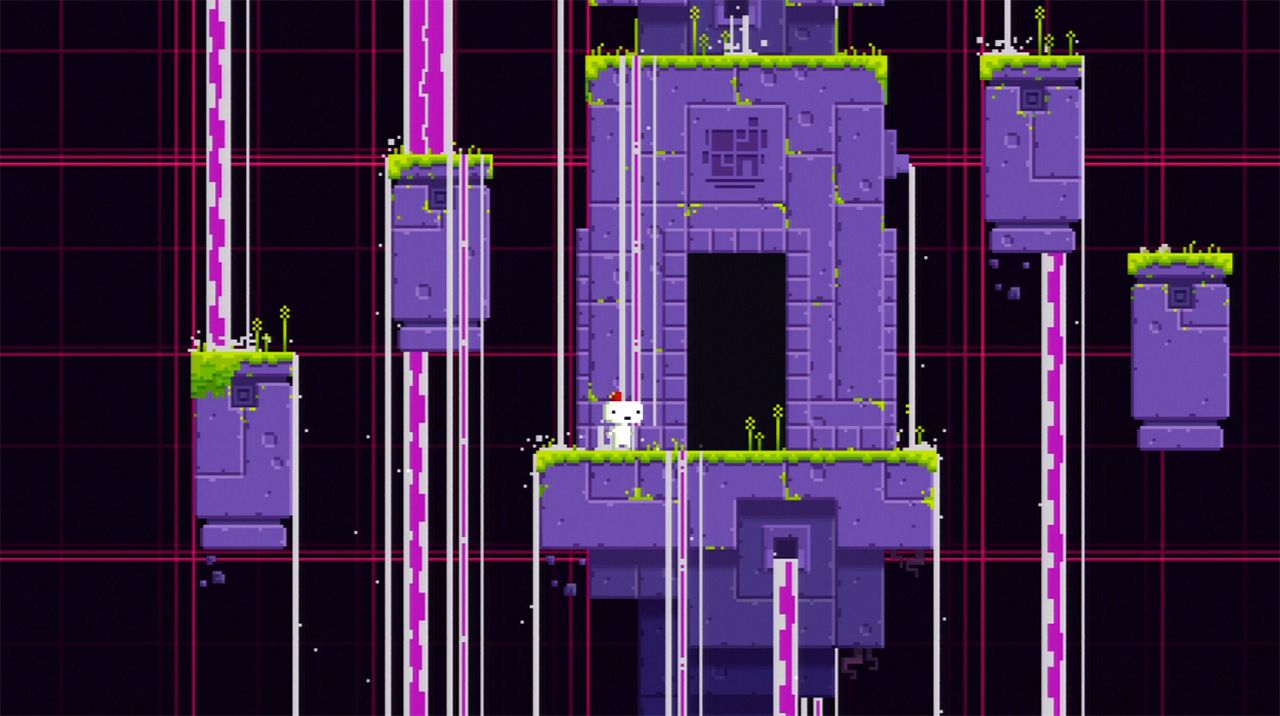 You awaken as Gomez, an oval headed sprite who is briskly summoned to the top of his 2D village. One quick encounter with a mysterious fez adorned old man, followed by one with a giant golden cube and Gomez is granted his own magical fez, giving him perception of the 3rd dimension. Some fiddling from Gomez fragments this monolithic cube into pieces, threatening the very fabric of his existence and it is up to you to find the pieces, re-assemble the cube and save the world.

It’s a threadbare premise for a blatant collect-a-thon and yet, like the greatest of platformers, FEZ’s gameplay is the real motivation to explore its every inch. Polytron have spliced the DNA of an ordinary platformer with a perspective shifting chromosome, genetically engineering an optically illusive puzzle-platformer hybrid. Much like the Escher inspired Echochrome, FEZ is based upon a false logic: Everything within its world has a 3 dimensional relationship, yet your visual orientation is limited to four isometric perspectives on a horizontal plain. Each of these perspectives appears as if 2D due to the cubism of its graphical construction, and with that 3rd dimension imperceptible, the logic of the 2D image takes over.

Describing FEZ’s spatial reasoning can easily sound obtuse, like an overly complex Paper Mario or Crush. But what could have quickly expanded into a mind boggling conundrum of control is introduced gradually with such elegant coherence that it soon becomes as much an acceptable part of videogame logic as hopping between platforms. A flick of the triggers smoothly switches between perspectives, revealing hidden ledges, stitching together a staircase out of once unrelated structures or bridging the gap between distant objects. 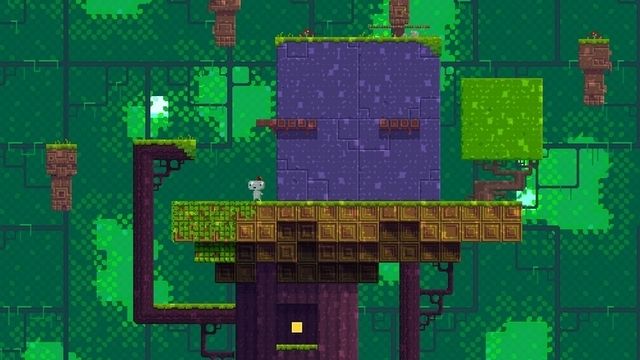 All of this hinges upon complex stage designs, most of which are structurally composed of a central square, its side painted with a 2D stage that interlocks with its neighbors. Most contain around four or five individual puzzles, fitting FEZ’s perspective shifting mechanic around a variety of themes. Luminescent sewers control water flow through twistable valves, the nooks and notches of a forest tree spiral an ascending path and invisible platforms are illuminated by the lightning strikes of a haunted graveyard. It is little wonder that FEZ took 5 years to develop considering the fact that each puzzle had to be designed with an additional four layers of complexity. Yet the time taken is evidently worth it as Polytron consistently find a nice balance between the difficulty of each illusion and the ease of their solutions.

In every other element of its design, FEZ is wisely handled with a degree of simplicity in mind, so as to avoid clouding this central conceit. There are no health bars, lives, enemies, bosses, nor any form of conflict to contend with. Only tears in the fabric of space and time resulting from warping back and forth between stages too much provides any form of peril, sucking you out of the game into non-existence. And even this is unpunished as Gomez is simply re-spawned on the last piece of solid ground. Throughout, FEZ is purely a puzzler, the basis of its every puzzle being this perspective shifting platforming, and it is this adherence to such restraint that allows the ingenuity of those puzzles to shine through.

There is however rather more confusion to be had with the overall structure of FEZ’s open world. It is constructed much like a tree, with Gomez’s village being the seed from which roots delve down, and a stem reaches upwards, each branching off into multiple levels. It is a necessarily complex structure and even though Polytron have painstakingly mapped out what is quite possibly the most intuitive 3 dimensional representation, as well as providing pop-up windows with a pictorial representation of the next stage in front of every opened connecting door, it can still be irritatingly confusing. 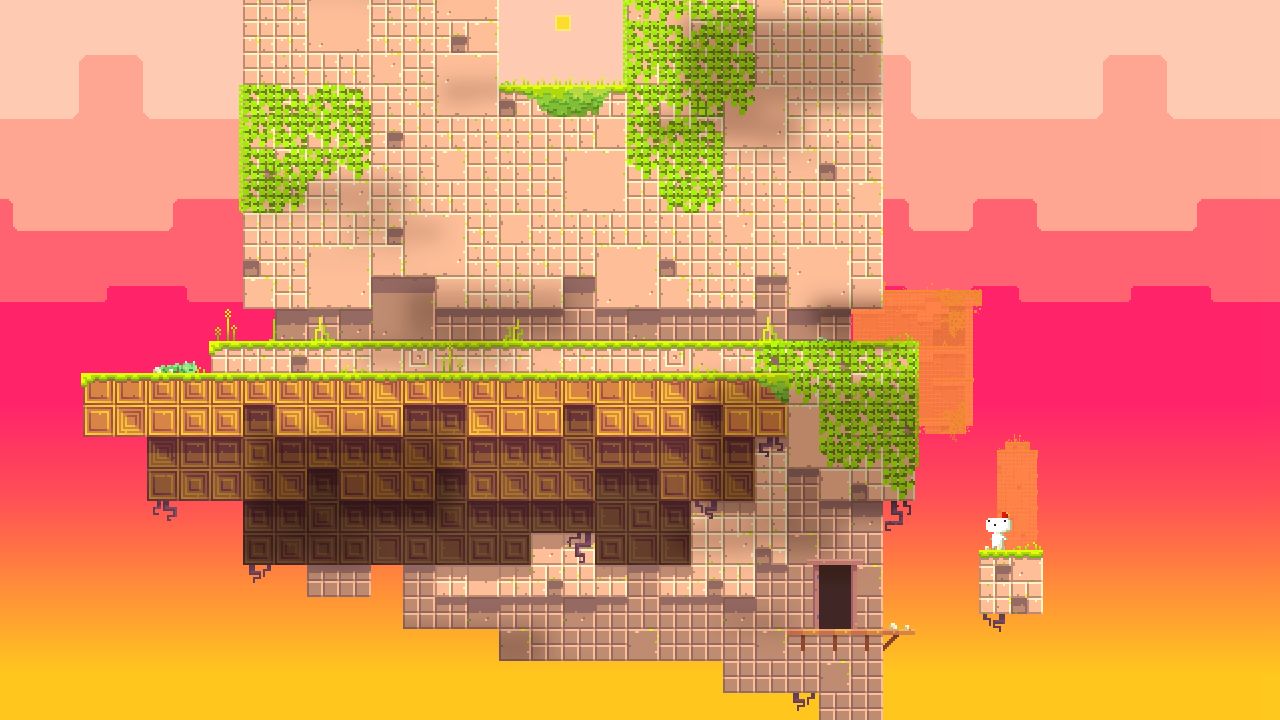 It is alleviating then that it never feels anything less than an enchanting world to explore, as Polytron’s art is crafted with scrupulous attention to 16-bit detail. The pixel-cube construction of each area is meticulously authored down to the individual design and placement of every block. Bold pastel sky’s graduate between deep morning blues and evening purple hues, and pixel art snails, worms and birds jovially bound around, reacting to your presence. All of this is wrapped in a warm blanket of ambient electro-synth, charged with as much comforting nostalgia as its visual design.

A fond reverence for the retro is woven throughout every level of Polytron’s design. It’s in the tinkling crescendo and rotating camera accompanying the opening of chest, the bleeping diminuendo when warping down a pipe, the hidden hieroglyphic language constructed of Tetris shapes and the scripted glitch-crashes leading to a nice impression of a DOS re-boot screen. But where fake crashes are an enjoyably quirky throwback, FEZ’s genuine technical faltering’s are less so. Slowdown occurs on multiple occasions during more complex stages, and one encountered glitch forced a restart.

Still these prove a minor blip in the grand scheme of Polytron’s ambition, which is one that cannot be faulted for a lack of content. Beyond the initial lengthy search for those 32 golden cubes lies a new game plus mode in which 32 equal and opposite anti-cubes hide behind even more craftily deceptive and challenging illusions. Further mysteries unfold throughout as you acquire Windwaker style treasure maps alluding to hidden secrets and stumble across cryptic artifacts whose mysteries require de-coding to unravel. 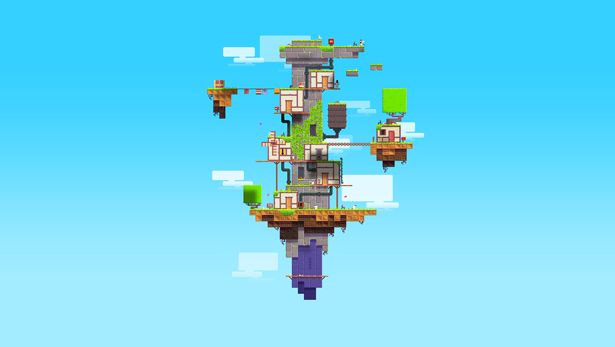 Just when you think you have a handle on its depth, FEZ presents another layer of referential discovery. It feels like a sentimental return to the gaming days of your childhood viewed through a fresh pair of eyes, and reminds of a youthful Nintendo with its infinitely creative re-use of a simple and pure central idea. That idea is one of magnificent ingenuity, one that consistently intrigues and one that not only challenges your preconceptions about the very space in which videogames occur, but also revives a sense of boundless exploration not felt in videogames for a long time.

Our ratings for Fez on Xbox 360 out of 100 (Ratings FAQ)
Presentation
90
Meticulously detailed and wonderfully crafted, FEZ's pixel cube art work has evidently had a great deal of attention.
Gameplay
94
Polytron have taken one singular, ingenious perspective shifting mechanic and elegantly constructed a plethora of optically illusive platforming puzzles that always feel challenging, but never too confusing.
Single Player
92
A perfect amalgamation of the new and the old, enriched with multiple layers of nostalgic references. Its only downside is the confusing complexity of its overall world.
Multiplayer
NR
None
Performance
65
FEZ has clearly been treated with such careful attention to detail in every area that slowdown and glitches stand out as a weak spot.
Overall
92
Should you have fond memories of gaming's 2D era, FEZ will undoubtedly leave you with a smile on your face and a warm fuzz in your heart. And yet it is so much more than simple nostalgia, as it deftly blends the old, with fresh new ideas of perspective shifting platforming. 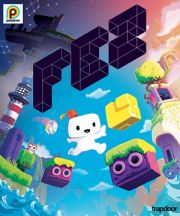 Our Review of Fez
92%
Superb
The Verdict:
"Polytron's amalgamation of 2 and 3 dimensions brilliantly combines nostalgia and ingenuity into an experimentation of spatial logic"
Game Ranking
Fez is ranked #8 out of 1715 total reviewed games. It is currently our top ranked game released in 2012! (145 in total)
7. Bayonetta
Xbox 360
8. Fez 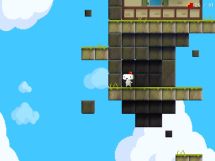