Not all those who wander are lost

Journey is, at its heart, every great videogame adventure ever created distilled to a pure and simplistic form. A world of intrigue and subtle suggestion rather than heavy handed scripting, and a story of ambiguity and personal interpretation as opposed to a well-defined narrative. It knows that wonderment is rarely found in the obvious and brash, but in the mysterious monuments of a past civilisation. 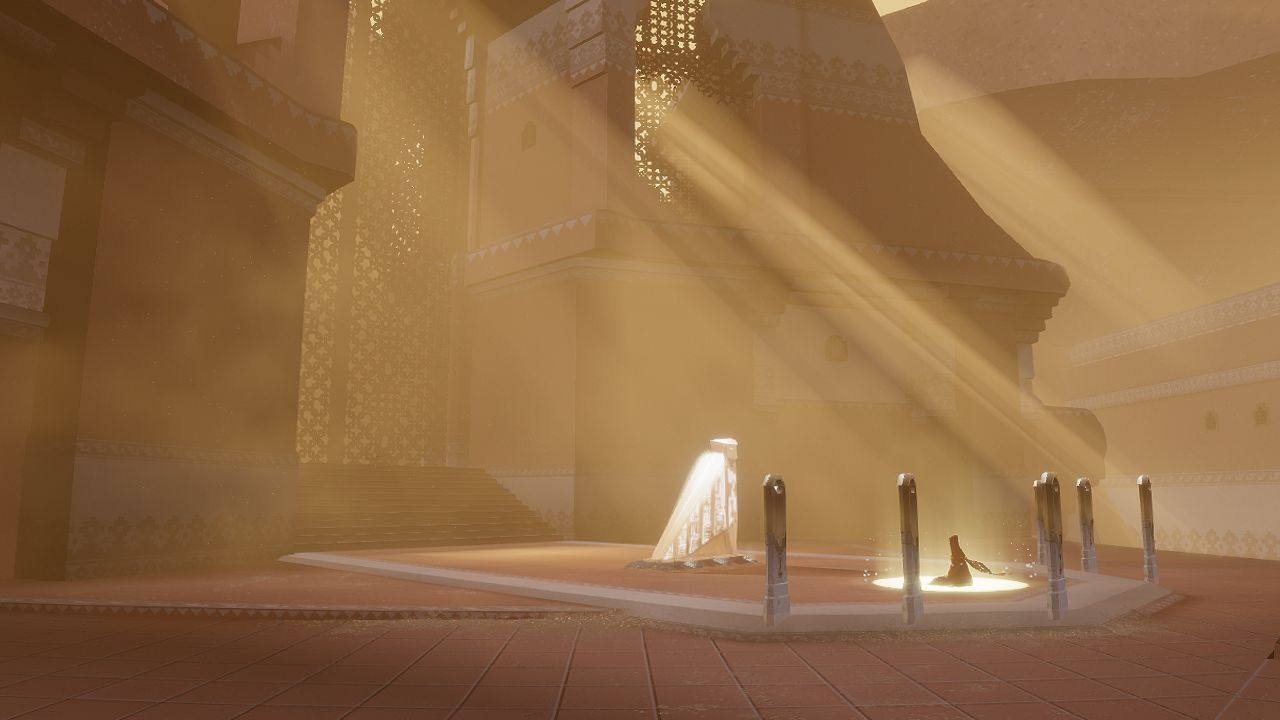 It is fitting then that Journey begins with so very little guidance. Your cloaked armless figure awakens in a barren ocean of sand with nothing but a few onscreen control prompts to impel. Climbing the nearest dune pans the camera back to reveal a beam of light atop a distant mountain and from here on you are left with little other indication as to what you must do but advance upon this ever present background texture. Curiosity, you soon come to learn, is your travel guide for this adventure as objects of intrigue are always placed just on the horizon, with hazy structures lining your path through the plains of this quiet land.

What is the illuminated object resting at the peak of that mountain? You may ask. Why does this wandering Sherpa that we guide desire it? You could question. But to inquire about such details would be to misinterpret Journey’s true nature. Thatgamecompany clearly understand that it is not in obtaining the goal, but in the events of the journey to reach that goal where we learn, discover, grow as individuals and stumble across others who wander the same path.

Most of your journey is spent simply walking, which is interspersed with the occasional glib of simple platforming. You also have the ability to shout a single symbol, producing a sphere of sound that awakens the magical powers of nearby scarfs, which in turn charge up your floaty jumping ability. Reduced to such a basic set of mechanics, some will undoubtedly balk at Journey’s simplicity as a videogame. But fans of Thatgamecompany’s previous exercises in minimalistic design (Flow and Flower) will understand that Jenova Chen and co are the masters of utilising basic videogame interactions to form emotive experiences that drive at the very core of what defines this medium. 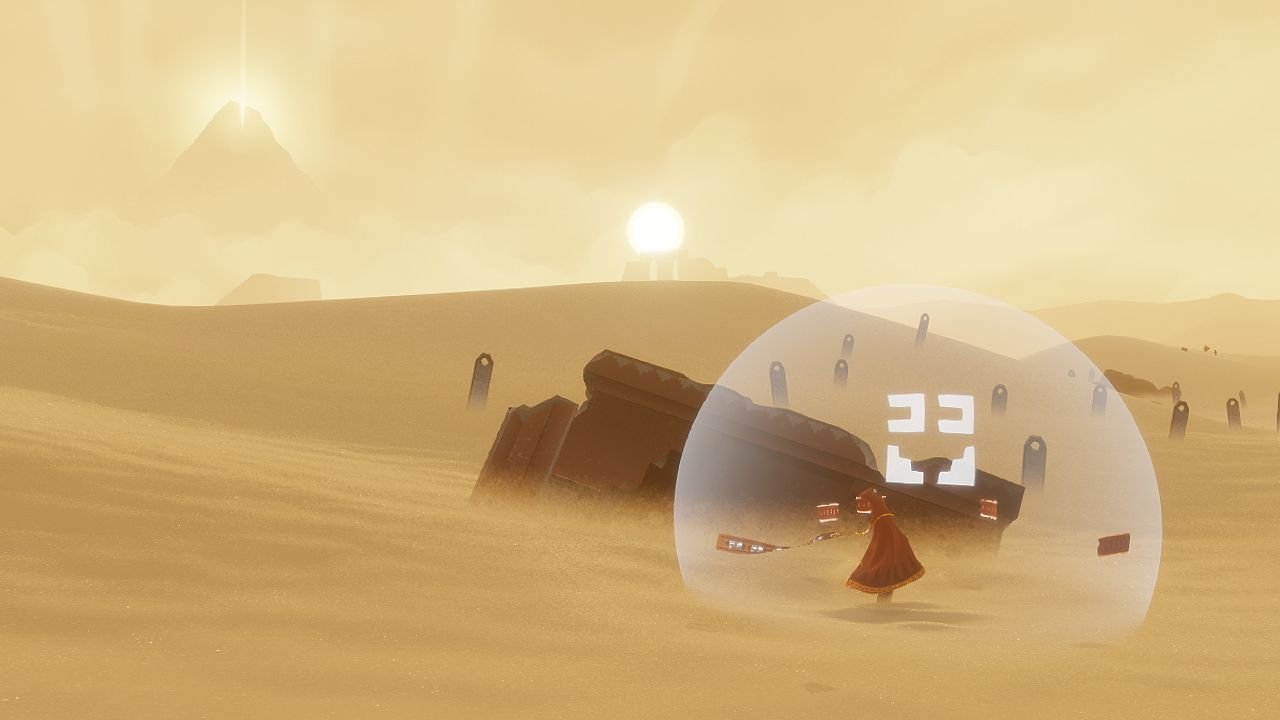 Indeed Journey proffers many comparisons to its predecessor, Flower, as both titles progress through a similar emotional arc and are to some extent about returning life to areas of dilapidation. The remnants of Flow are also visible in the many scarf creature designs, but where those titles were an abstraction from common videogame themes (microbial ecology and petal propagating breezes); Journey is composed of much more common adventure game tropes. There are stealth sections, downhill slaloms and even subtle leveling up in what is Thatgamecompany’s most game-like experience to date. Progression is even broken up by a number of 8-bit cave painting styled cut-scenes, depicting visions of future challenges as well as past accomplishments.

These features could potentially have sullied the simple purity of the journey had they not been introduced with such delicacy and subtlety by the designers, who display Valve levels of expertise in the natural introduction of new mechanics. It is only the collectable symbols littered throughout environments that somewhat detract from the experience, feeling unnecessary as content padding, artificially rewarding exploration instead of allowing a curiosity of visual design to draw your eye.

And speaking of visual design your retinas are consistently pleasured by the minimalistic and cleanly cell shaded landscapes of Journey. Its sand dunes glitter and flow in the wind with the texture of a viscous liquid and caverns of large upright cloth structures gently sway as underwater seaweed would. Throughout Journey is nothing short of a visual majesty to behold, and when combined with an orchestral soundtrack that aches with elegiac sadness and elates buoyant joy with perfect timing, Journey conveys the kind of ambiance you would expect from a spiritual experience. At once awe inspiringly grand and ethereal, yet invitingly simplistic and warm. 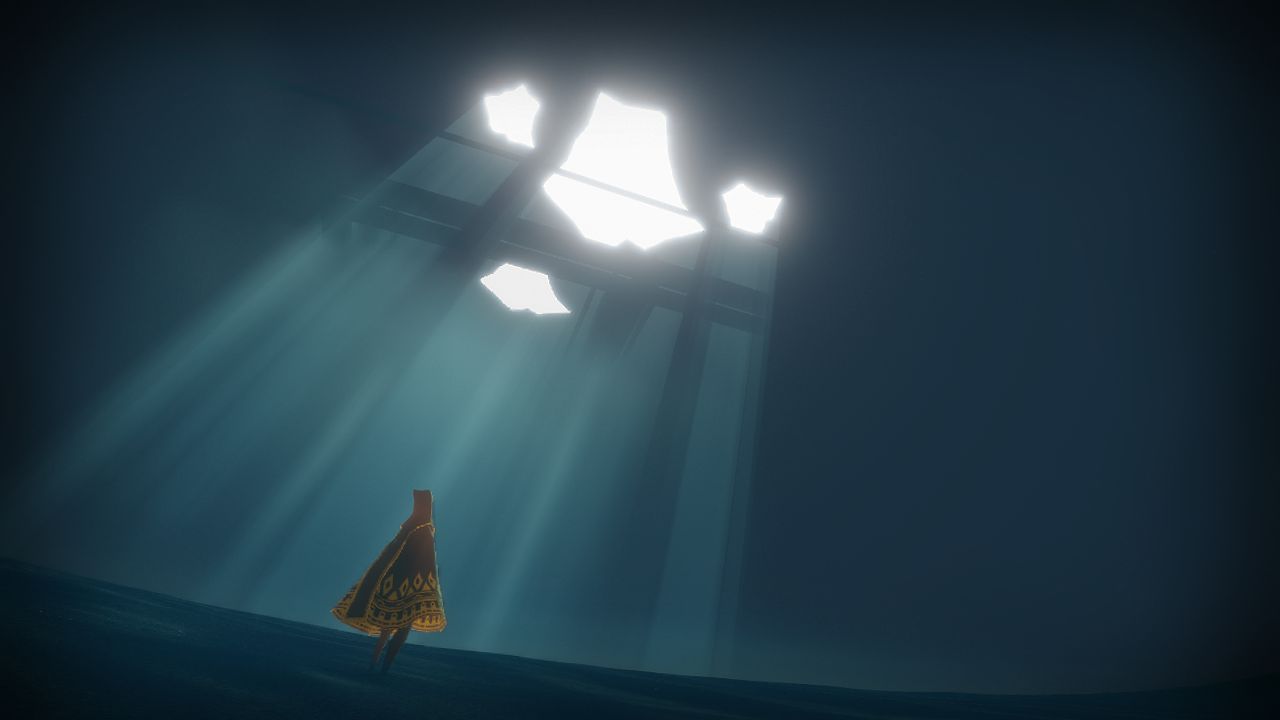 Its maroon-shrouded central protagonist has all the distinction and simplicity of a classic 8-bit character design, with a silhouette as recognisable as Mario or Samus’s, it is essentially composed of three triangles, a large body and two long thin pin legs. It can often paint a figure of loneliness traversing this desolate land. But then Journey has another game-like feature; its implementation of co-operative play.

Easily mistaken for a hallucinated mirage upon your first encounter, Journey’s co-operative element is integrated with such an unusual seamlessness that it can easily surprise. The feature is not hidden behind myriad menus and lobbies, but incorporated as a natural element of the world with fellow wanderers popping into sight with no forewarning or indication. These acquaintances tend to vary from fleeting affairs of fancy to full Journey travel companions, yet all the while your limited interactions dictate that a fellow pilgrim will always remain a stranger. Shouting your symbol within the vicinity of him/her will charge their jump giving some incentive to companionship, but the feature is completely unessential and therefore feels a little hollow. Yet the presence of a fellow waylaid wanderer proves a strangely comforting one as you guide each other through Journey’s challenges, the latter wind traps and sharp cliff edges.

Much like the rest of Journey’s design it is the utter simplicity of these mechanics in play that make it such a potent experience while it lasts. But sadly, clocking in at around 2 hours, Journey is something of a brief encounter, the antithesis of a content heavy, punishing Dark Soul’s style slog. And when considered with the fact that there is little replay value to an experience whose allure lies in that initial sense of wonderment, Thatgamecompany’s latest will undoubtedly leave some craving, rather than satisfied. 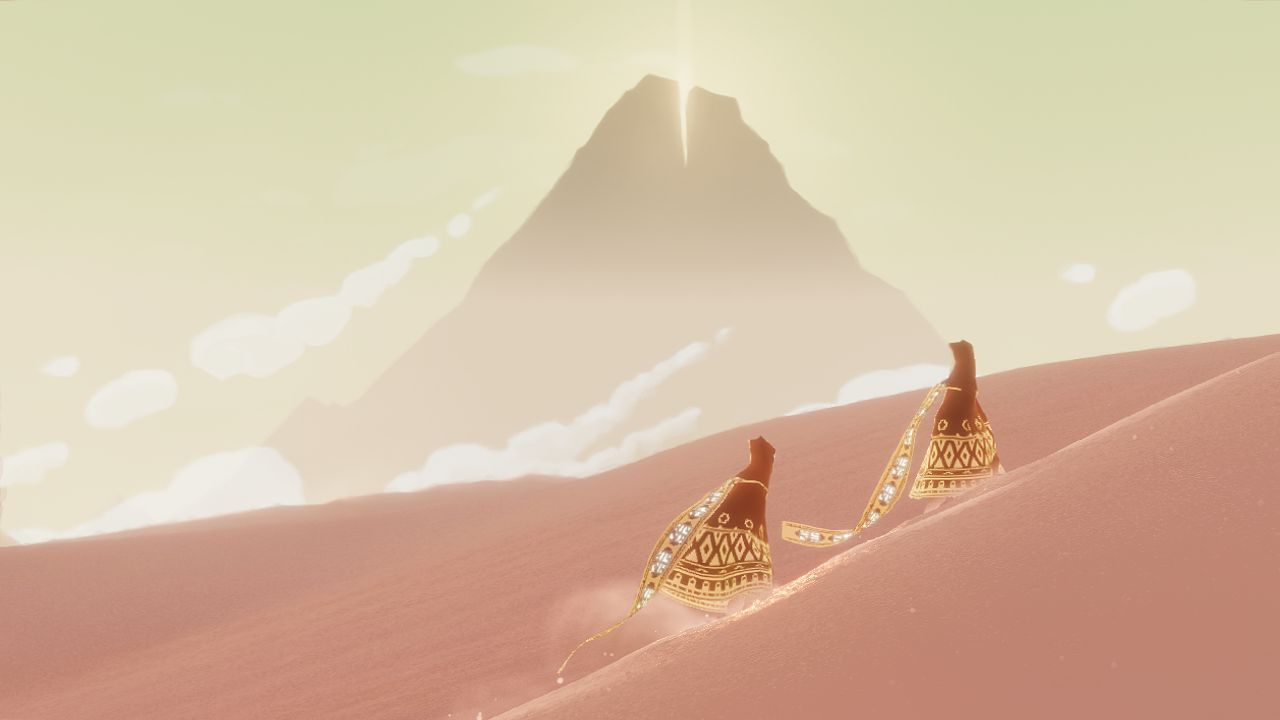 But this also speaks volumes about the quality of what is here. In reducing the common videogame adventure to its constituent elements and basic emotional arc, Thatgamecompany have produced an adventure that stands as a simple metaphor for the journeys we all take in our lives. A venture into the unknown, traversing the hardships and struggles against seemingly insurmountable odds, the disappointing setbacks and failures. But also the discoveries, revelations and beautiful locations found through adventure. As such it has sculpted an incredibly emotive experience, more evocative than the detailed crinkle of an LA Noire brow, or the uncanny valley bound conversations of Mass Effect. One crafted through pitch perfect tone, theme, setting, music, feedback and the gentle helpful push of a complete stranger to continue through this Journey’s difficult moments. It is all that and more, in one of the purest and most beautiful adventures that videogames have ever taken us on.

Our ratings for Journey on PlayStation 3 out of 100 (Ratings FAQ)
Presentation
90
Elegant and understated, Journey is never anything short of a mesmerizing audio-visual presence.
Gameplay
88
Interactions are minimal, reduced to simple platforming, basic adventure game mechanics and single symbol conversations with fellow online wanderers that may be of-putting for some. But through this simplicity Journey expresses a number of themes and ideas rarely touched upon by videogames.
Single Player
90
Short in length and content, yes. But during that time it is nothing short of a masterpiece in minimalist game design.
Multiplayer
80
Journey's fleeting and wordless interactions with fellow wanderers are like nothing before it. The lack of any true interaction between two players is a little hollow, but to take this Journey with a complete stranger is a unique experience.
Performance
95
Consistently as fluid as the sands of its deserts or the ripple of its scarfs blowing in the wind.
Overall
90
Whether you care to examine the thematic underpinnings of this adventure or simply appreciate the audio-visual treats on offer, it is undeniable that Journey is something unique. Dig under its surface and you have an experience that says something rather profound about videogame adventures. 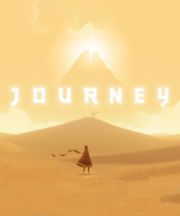