A well-constructed, quirky stealth puzzler that never quite matches the creativity or quality of its numerous inspirations

If XBLA has facilitated anything this generation, it is the rise of the creatively driven smaller title. Games that take more unique and refreshing design chances with less content and lower production values, allowed by the reduced risk associated with a cheaper pricetag. Young developer Trapdoor’s first title, Warp, is emblematic of this definition. A 2.5D stealthy puzzle platformer centered around translucent alien protagonist Zero’s psycho-kinetic and warping abilities, used to escape the confines of an underwater scientific laboratory. 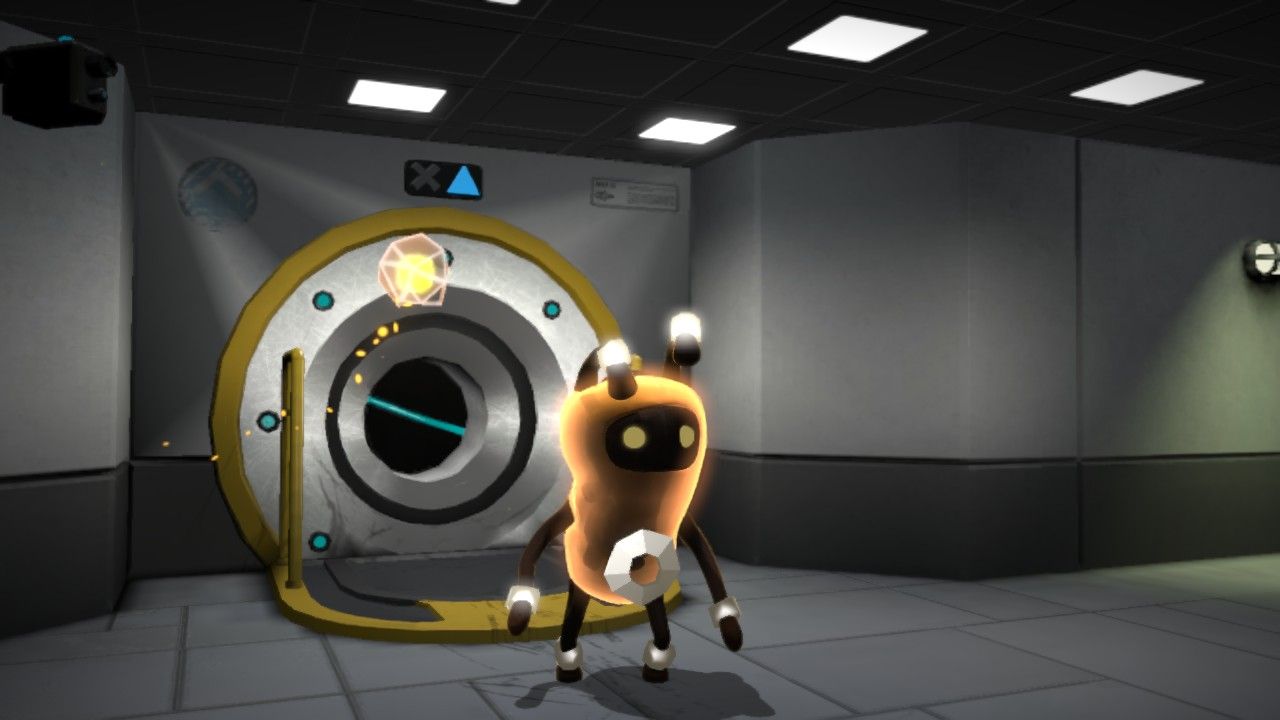 It plays as a cross between the early Metal Gear Solids and Splosion Man, with the former’s top down perspective and stealth gameplay, sneaking past guards and security cameras, and the latter’s laboratory setting and quirky cartoonish violent tone. The core mechanic of instantaneously warping to a not too distant location forms the basis of all puzzles within the laboratory and makes progression through opening doors a thing of the past, as walls are no longer a barrier to traversal and more a useful barrier in the line of enemy sight.

Zero’s warp also allows him to occupy both a number of inanimate environmental objects as well as any humans he comes across. Aside from providing useful hiding spots, possessed objects can also be internally combusted, creating ad-hoc explosives and turning the scientist population into sticky limbless messes.

Further skills are acquired throughout the course of the semi-linear laboratory progression as other alien species being held captive are located and their powers absorbed into Zero’s gelatinous anatomy. Psycho-kinetic abilities like holographic projection and telekinesis are acquired leading to an array of skills reminiscent of Free Radical’s 2004 psychic adventure Second Sight.

The puzzles formed around this set of skills are largely interesting, although there is nothing here pushing Portal levels of ingenuity. Most of Warp’s ideas are played out in the first half of the campaign, with latter puzzle design predominantly being an assembled mixture of those earlier ideas. Still, it always remains sadistically satisfying to trick a guard into shooting his friend through your holographic projection, before inhabiting his body and combusting it in a shower of guts, throughout what is a relatively short 5 hour journey. 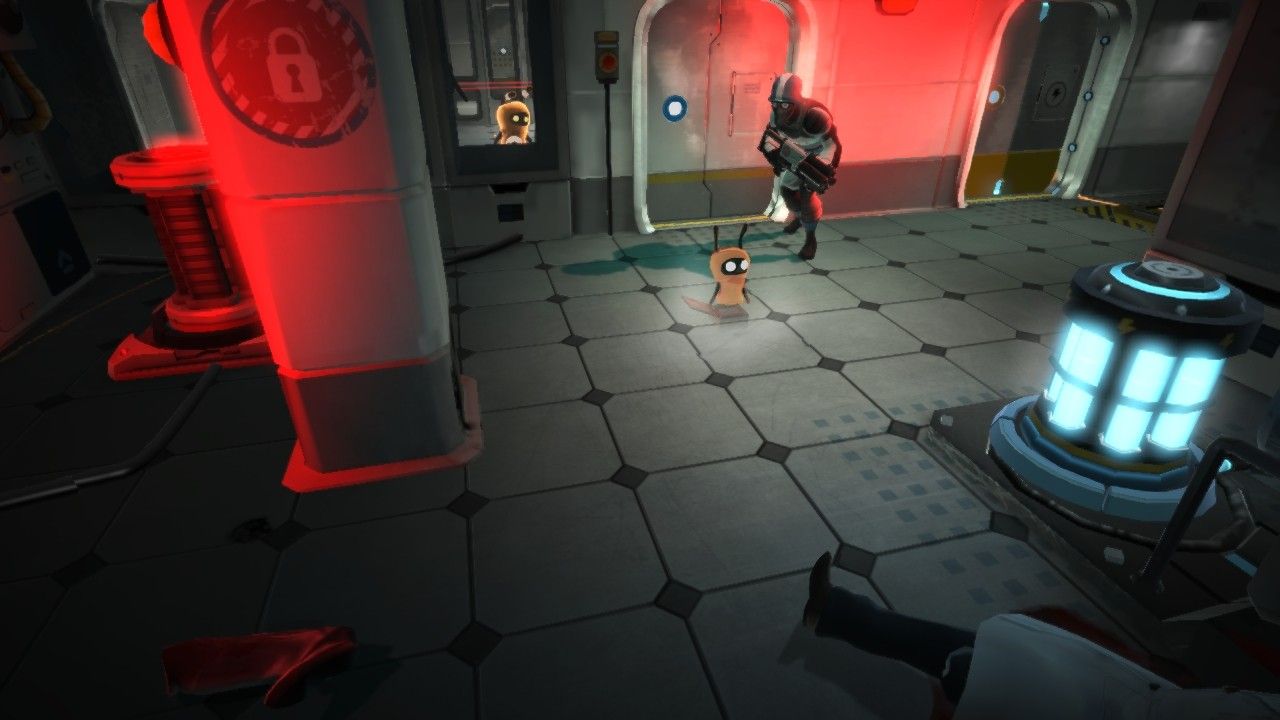 Its Metal Gear inspiration extends to a series of virtual reality style minigames strewn throughout each of the 4 laboratory levels, presenting challenging scenarios in which you have to either reach the other end of the map, or kill all the human occupants of a level in the fastest possible time. The lack of challenge found in the adventure is somewhat made up for here; as well timed warps and more ingenious use of your abilities is required to succeed. The speed at which you complete these challenges being ranked between gold, silver and bronze.

Depending upon the ranking received, a number of gummy bears are bestowed upon you. These can be spent on upgrading Zero’s abilities, making him quieter or faster in a relatively shallow RPG component that has little effect upon core gameplay. Not just earned in these minigames, gummy bears are present in hard to reach areas of the lab and do more to encourage further exploration of stages than the only other sub-objective of destroying film canisters containing video evidence of your escape, for which you rewarded with artwork.

Warp’s lack of any multiplayer or co-operative component means that the short lifespan of its single player is a bitter pill to swallow by the modern standards of equivalently priced downloadable titles. But the plethora of competitive leaderboards assembled from the GTA-style array of stats, such as distance traveled and the number of humans exploded, goes a little way towards providing some form of competitive challenge.

Such shortfalls in content are also evident in Warp’s production values as well. One voice actor provides all scientists’ voices and there is a complete lack of any soundtrack other than the title screen. Somewhat clunky controls can often contribute to unnecessary deaths and there is a little slowdown in the framerate experienced in later, more complex stages. 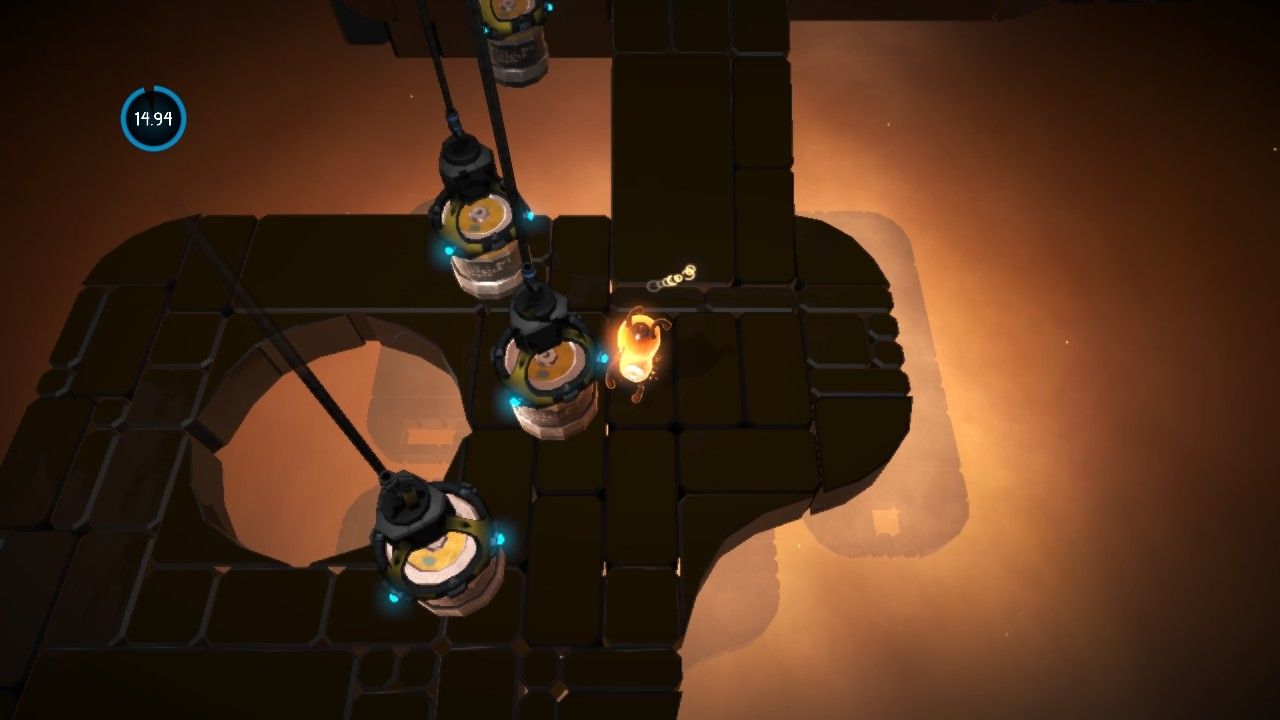 Despite such issues, Warp has a charming quality, most exuberated through its central character that never speaks - but instead communicates through squeaky mumbles and exaggerated eye and tentacle expressions, having something of the mischievous alien nature of Disney’s Stitch. The laboratory setting is nicely detailed and the underwater location provides some lovely external details like passing sharks and submarines. But the internal stages rarely vary from clean sterility and become all but blandly dissimilar as you warp your way through white lab after white lab.

Warp is a well-constructed indie title. It lacks a little inspiration bar its central set of bodily translocation and psychic mechanics, around which some interesting puzzles are formed. But what would have passed for great 10 dollar XBLA fodder when those services were in their youth, now feels a little behind the curve with titles like Shadow Complex, Bastion and Braid leading the way with an abundance of both fresh ideas and high quality production values. Which makes the lack of variety in the latter periods of Warp’s all too short single player, grind even more.

Our ratings for Warp on Xbox 360 out of 100 (Ratings FAQ)
Presentation
65
A 2.5D top down viewpoint brings a unique perspective to this stealth/puzzler. The settings are nicely detailed, if a little repetitive at times, but it is the lack of a soundtrack and the single voice actor for every scientist that let the presentation down.
Gameplay
70
The assortment of warping abilities acquired provide a lot of interesting puzzle design that rarely falls into frustration, although that could be more attributable to its relatively easy difficulty. Mixing its puzzles with stealth is an interesting idea, although one that does lead to some repetitive scenarios.
Single Player
65
5 hours is a relatively short lived experience in comparison with the modern day standard bearers of XBLA. Still, in that brief length of time, Trapdoor have managed to squeeze some interesting puzzles and unique stealth gameplay.
Multiplayer
NR
None
Performance
75
A little slowdown experienced in the latter more complex stages and slightly clunky controls serve as distractions to what is an otherwise well-constructed package.
Overall
68
Warp is exactly the kind of experience XBLA was made for in the first place, but in this modern day where an abundance of creativity is often coupled with brilliant production values, it doesn't quite match up to the current cream of the crop. Although it does have a gummy-bear-loving adorably gelatinous alien protagonist!

Our Review of Warp
68%
Adequate
The Verdict:
"A well-constructed, quirky stealth puzzler that never quite matches the creativity or quality of its numerous inspirations"
Game Ranking
Warp is ranked #1238 out of 1796 total reviewed games. It is ranked #107 out of 145 games reviewed in 2012.
1237. Amnesia: A Machine for Pigs
PC
1238. Warp