The arcade classic is finally available for home release, and I'm THRILLHO'd

The Simpsons - a cultural force of the 1990s and one of the longest running TV series of all time. The series was, and is, a multimedia phenomenon. And, for those who grew up of the 90s (such as myself), you may remember its genesis as a video game franchise. In the heyday of arcades, four-player fun and madness were synonymous with The Simpsons Arcade Game. The game's success in arcades can largely be attributed to when it was released. It was a perfect storm: Simpsons branding was ubiquitous, yet hadn't reached a saturation point; arcades were still thriving, and offered an experience with which home consoles struggled to compete with, and licensed beat-em-ups were still seen as novel, cool, and not a bad punchline. 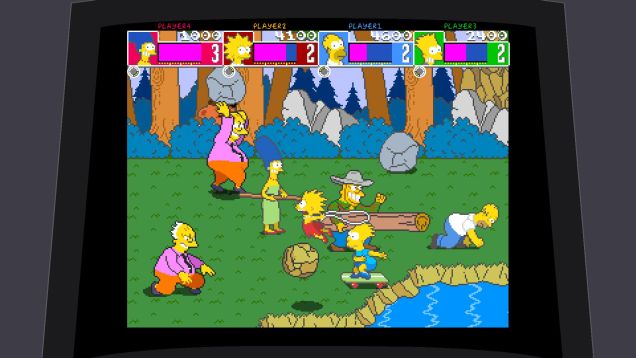 It was in this environment that The Simpsons Arcade Game was able to thrive. It set a high precedent that subsequent Simpsons games, especially those on home consoles, would not be able to live up to. It wasn't until the PS2 era that Simpsons games were critically well received, and even still, people yearned for a return to form, to the quality of this old arcade title. Now, in the year 2012, 21 years after the game's release, is the game really deserving of the love, or is it just nostalgia?

Starting out with the quality of the port of The Simpsons Arcade Game for PSN, it's clear that the game wasn't just shoved on to the service to make a quick buck. Backbone Entertainment has handled ports of similar games to PSN (such as XMEN and TMNT), and has shown that they put thought into the presentation and quality of these old arcade titles. Menus are presented within a virtual old arcade cabinet, and ambient sound effects like cash registers and item scanners immerse the player. It makes you feel like you found an old The Simpsons Arcade Game machine and some quarters in the back of a local Kwik-E-Mart. It's a small detail, but immediately put me in the right mood to play this game. Other small details, like smooth and sharp filtering for the pixel art, only help to add to the experience.

And, in fact, the art is great in this game. Fantastically replicated pixel art combined with the Simpsons' simple style makes the game look good even today. The music is a series of riffs on the Simpsons theme, and does the job just fine. This game has voice samples for all playable characters, which were a revelation for the time. They're extra hilarious now, especially those of Smithers and Mr. Burns, who are clearly not the actual voice actors, but simply some random dudes. 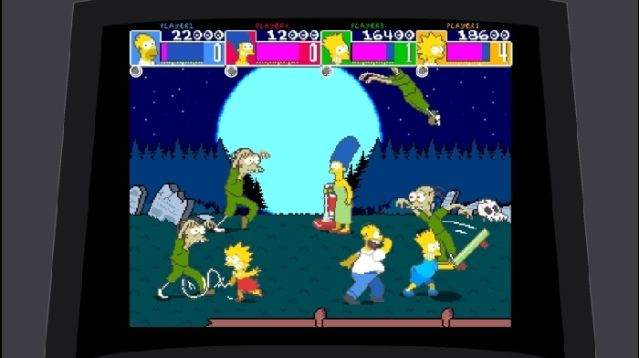 The gameplay is fairly basic, consisting of jumping, attacking, and team attacks, but feels really tight. Movement is on a pseudo-3D plane, allowing Homer and the gang move horizontally, vertically, and jump around the screen. While normally you're limited in the actions you can perform, multiple characters, environmental hazards, and occasional weapons helps to break up the monotonous feel. There are 8 stages in all, taking the family all over the town of Springfield, complete with a couple of boss battles. If you've ever played a beat-em-up before, the structure will seem immediately familiar.

Now, about the game itself. It's weird. That doesn't mean weird in a “Simpsons kind of way”. No, it's just weird. The game starts with Smithers robbing a bank for Mr. Burns. The incredibly, stupidly rich Mr. Burns. The diamond he is stealing gets caught in Maggie’s mouth, and instead of simply removing it, he kidnaps her and gives the rest of the family a reason to traverse 8 levels smashing in people's faces. The family is mostly fighting random thugs throughout the game, which is odd considering the bevy of characters the developers had to pull from. Well-known characters show up in the background occasionally, but they have no impact on what is happening on-screen. This dearth of recognizable faces and weirdly out of character cast members may be due to the fact that The Simpsons Arcade Game was developed by a Japanese developer Konami, or perhaps due to the fact that it came relatively early in the Simpsons’ life. Regardless of the reason, it makes playing the game now, after 25 years of Simpsons, oddly surreal.

Unfortunately, as I went through this crazy world, playing The Simpsons Arcade Game reveals the quarter-stealing philosophy behind many of the arcade games of the early 90s. They were short games with punishing difficulty, designed more to drain a child's allowance than to have a balanced difficulty curve. Backbone have tried to compensate for this by allowing players to choose the amount of credits they start with, along with the game's difficulty. While cool in concept, the standard 10 credits are about enough to get through the entire game, which clocked in for me at 35 minutes. 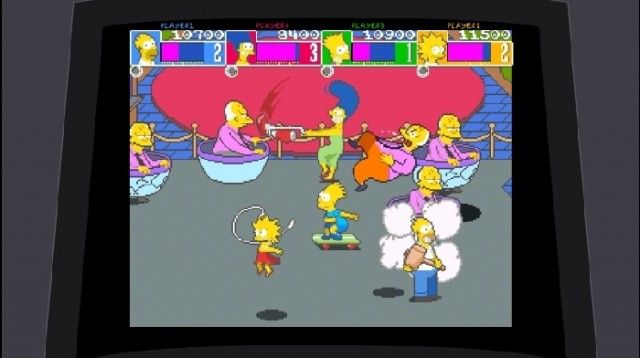 The game's length isn't as much of a problem as one may think. The game's arcade underpinnings means that it is designed to be played multiple times, and Backbone Entertainment has beefed up the reason to replay, adding a slew of extra content for beating the game multiple times. The game offers both leaderboards and unlocks, such as a character list and sound test. Backbone also provides the Japanese ROM of the game, which simply has some minor difficulty and scoring alterations. These extras are obtained by beating the game with multiple characters, and are a welcome incentive to go back through the game's 8 stages.

The game offers both local and online multiplayer, which is key, as a lot of the fun of this game is derived from playing it with other people. It's a fun romp on its own, to be sure, but much of the enjoyment comes from the chaotic nature that more people can provide. Online matchmaking works decently enough, but as this is a game that I highly advise is played with people you know, it often feels a little unnecessary and is not the ideal way to play The Simpsons Arcade Game.

All in all, it's a fantastic trip down memory lane if nothing else. The game proves itself to still be fun and playable, if antiquated, and it’s lovingly presented in this package. If you hold no nostalgia for the game, if you hold any interest for the Simpsons or beat-em-ups, I can still heartily recommend The Simpsons Arcade Game. It's a game of its time, and while short, is a blast to replay multiple times. To sweeten the deal, Backbone has incentivized replays with cool unlockables, making this a more complete package, and decently priced at 10 dollars. Of course, those out there that are all ready fans will rejoice at a chance to finally own the arcade classic.

Our ratings for Simpsons Arcade Game on PlayStation 3 out of 100 (Ratings FAQ)
Presentation
85
Backbone Entertainment has lovingly ported The Simpsons Arcade Game to home consoles. The arcade aesthetic of the menus and a bevy of small details and unlockables make this package a feel complete in its own right.
Gameplay
70
It's a 20 year old beat-em-up, and while it certainly feels dated by today's standards, the simplicity of the control works in the game's favor. While level design can feel a bit repetitive, the game still feels fun and chaotic, especially with others.
Single Player
70
The game's wacky, off-kilter story and solid beat-em-up style are still fun even on their own. While great fun, the game can be beaten in 35 minutes, and can take even less time in a group. This is padded out with a bevy of unlockables and different difficulties, and the short length of the game partially works in its favor, making for a game that doesn't feel like a chore to replay.
Multiplayer
80
The game comes with both online and offline multiplayer, and has a Quick Match feature for those without friends that own the game. The game is best played locally, but the option for online is there for people who want it.
Performance
95
The game runs buttery-smooth both online and offline, and is perfectly emulated.
Overall
70
Fans of the Simpsons and old arcade beat-em-ups will rejoice at the chance to finally play this classic on a home console, and will appreciate that the game's port job is not just a cash grab. For people interesting in checking it out with no prior experience or nostalgia, just keep your expectations in check. 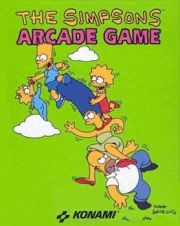