An overly familiar setting and concept don't do this game any favors, but the fundamentals of good puzzling are still there

Occasionally, I get a guilty shudder when I use the phrase ‘first person puzzler’, because in my mind, first person puzzling has been a genre since the dawn of video games. For example, wasn’t the Myst series technically in first person? And before that, I can remember point-and-click puzzlers from the floppy-disk days, clumsy though they were. Even the original first person shooters had light puzzling integrated into them, from Half Life to System Shock 2. But there’s no getting around the obvious: with the success of Portal to pave the way, the past five years have seen a new kind of gaming that deserves the title ‘first person puzzler’ in a special way, carried on by games like The Ball and TAG. These aren’t simply puzzle games that include walking around a 3D world: they are games that smoothly merge platforming with real-time, three dimensional puzzle solving. 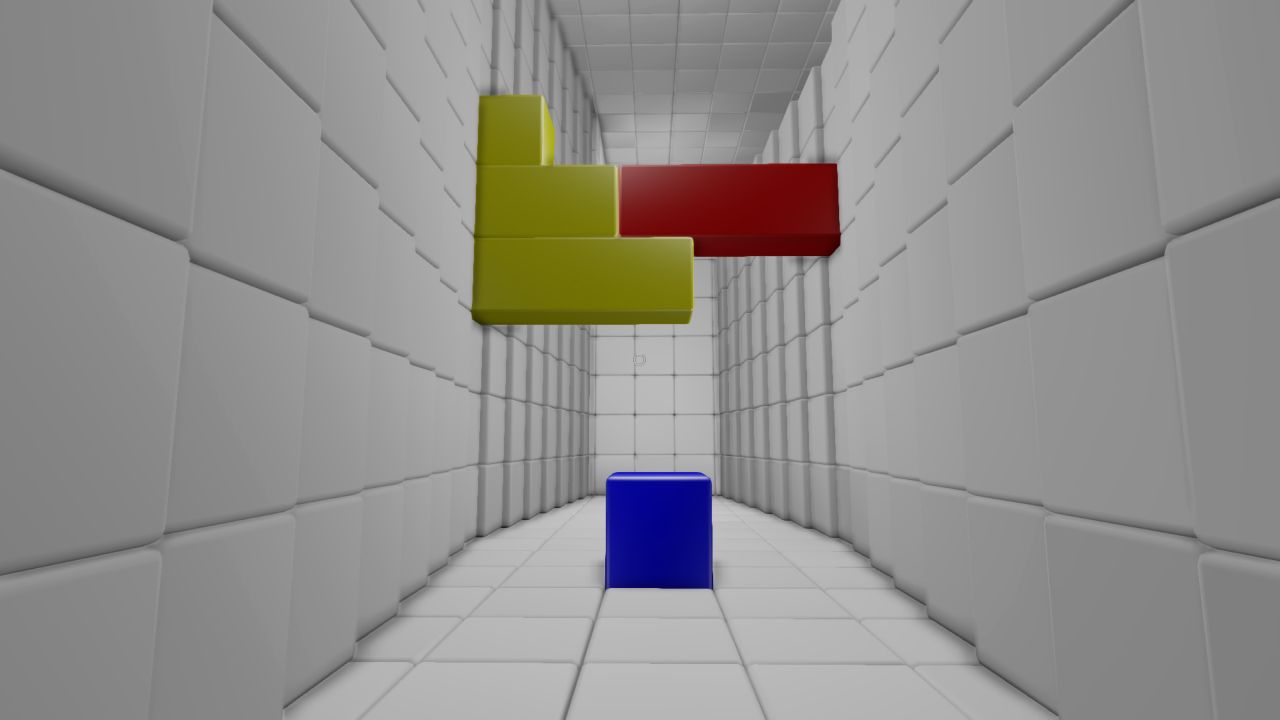 Into this reinvented genre comes Q.U.B.E., the debut game of the new indie studio Toxic Games. It’s impossible to play Q.U.B.E. without comparing it to the Portal games, but the truth is that the first person puzzler is such a unique and new flavor of gameplay that it’s difficult to make a strong entry into the field without covering the much of the same ground as the founders. More important is the question of whether Q.U.B.E. can add a unique flavor and give an original gameplay experience; I’m happy to report that it most certainly can.

Q.U.B.E. takes place in an ultra-sterile and minimalistic indoor environment. Every room and passageway is almost entirely made up of pure soft-white cubes (hence the forced acronym name). It sounds like the kind of aesthetic that would drive you mad after too long, but the game excellently uses this minimalism to greatest effect by finding new ways to make cubes interesting as you walk through the facility. Moving staircases and pulsing walkways perfectly counterbalance the extremely manufactured feel of the puzzling environment, giving you the pleasant feeling that while this world may be as pure and strict as Lego set, it’s also dynamic... almost a little whimsical. This mixture of feelings is something that’s difficult to achieve, and Q.U.B.E. deserves credit for hitting the sweet spot. The visual aesthetic merges well with the soundtrack, which is mostly built from clean, synthesized instrument choices that never distract from the problem at hand.

And oh, what puzzling there is to be had! Like most other titles in the genre, Q.U.B.E.’s puzzles are based simply on progression from room to room. With each new room, you’ll need to locate the exit and figure out how to get to it, sometimes with the aid of rolling spheres or beams of light that can act as keys. The twist to the game is that certain cubes can be manipulated by the player, via a set of telekinetic gloves which are always onscreen. Pull cubes out, push cubes in, or use cubes as buttons and keys simply by clicking one mouse side or the other. Usable blocks or buttons are highlighted with very bright primary colors, and the extreme simplicity of colored cubes on white cubes has just the right focusing effect as you play through the puzzles. 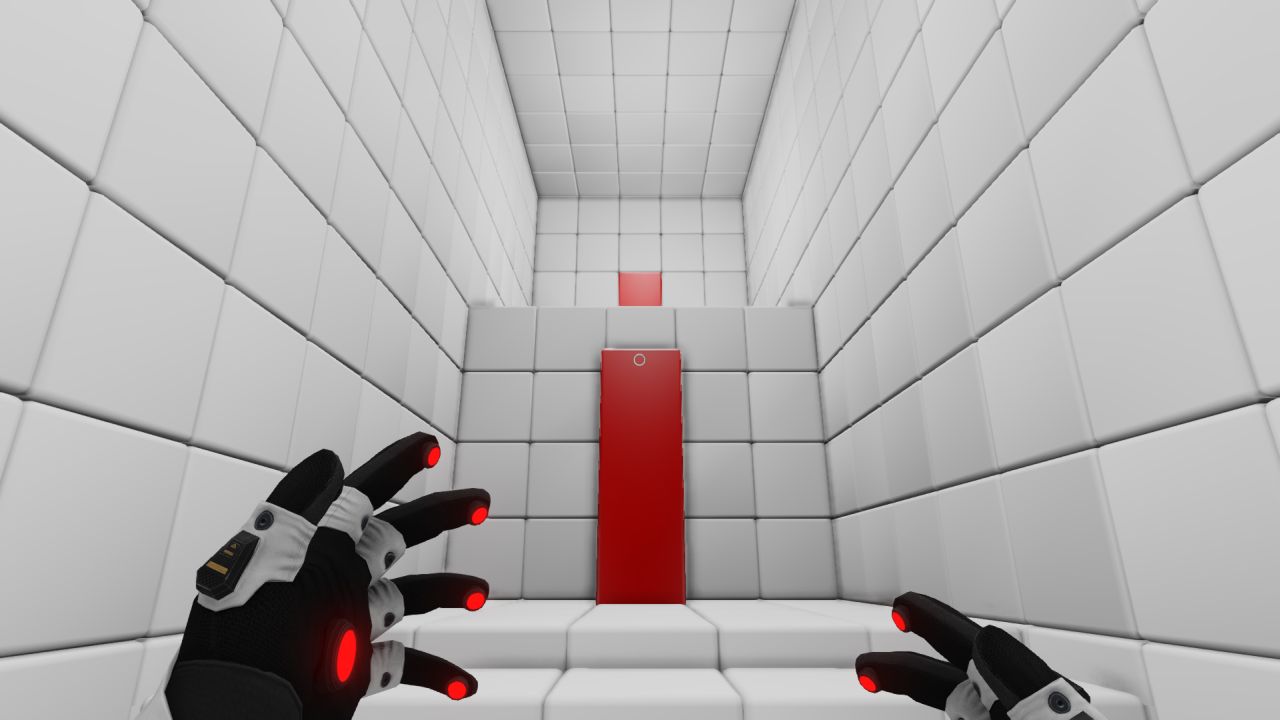 Q.U.B.E. does a great job of keeping the puzzling interesting. Several times, just as I was about to become bored by the puzzle style, the very next room would throw out a delightfully game-changing twist (so good that I won’t spoil it here). When the puzzling in the game is at its best, you might walk into a room filled with entirely familiar cube types, only to see a slight change to the set-up that throws you for a loop.

However, the puzzling aspect of the game is still just a touch rough around the edges. Q.U.B.E. is at its best when it truly combines problem solving with 3-D platforming, but sometimes the puzzles in Q.U.B.E. are essentially simple 2D puzzles translated into a 3D environment. This change in style is sometimes very welcome: for example, at one point the gameplay shifts to using your block-moving skills to divert ball paths in flat, class-covered obstacle courses, which was a fun application of the block-moving mechanic. On the flip side, sometimes these 2D conversions don’t build at all on previously learned mechanics, and feel like they don’t belong in the game. A section devoted to diverting light beams through prisms felt particularly forced and not quite in line with the elegance of the rest of the game. There’s a second aspect of the puzzling that sometimes doesn’t feel quite polished and that lies at the heart of many puzzlers, and that is the problem of enumeration. If test chambers are made up of too many strictly defined interacting blocks, each of which works in only one way, then sometimes a player might simply wander to the solution by pressing buttons in a straightforward, obvious order. The best puzzles are those which combine only two or three concepts while still requiring a ‘leap of thought’ to grasp, and thankfully Q.U.B.E. has its fair share of these to keep you entertained.

The aesthetics of Q.U.B.E. have such a polished feel to them that I was surprised to find one or two technical issues pop up during the game. Not once but twice within my first few hours I actually got stuck inside levels, caught between cubes or angled surfaces, forcing me to quit the game and lose my progress. These blips I could have let slide, but what really surprised me was when, on a third occasion, I was testing out an alternative puzzle solution only to discover that I had boxed myself into a level hole with no chance for escape. That’s right… an out and out level design flaw, which felt like it really should have been caught in testing. 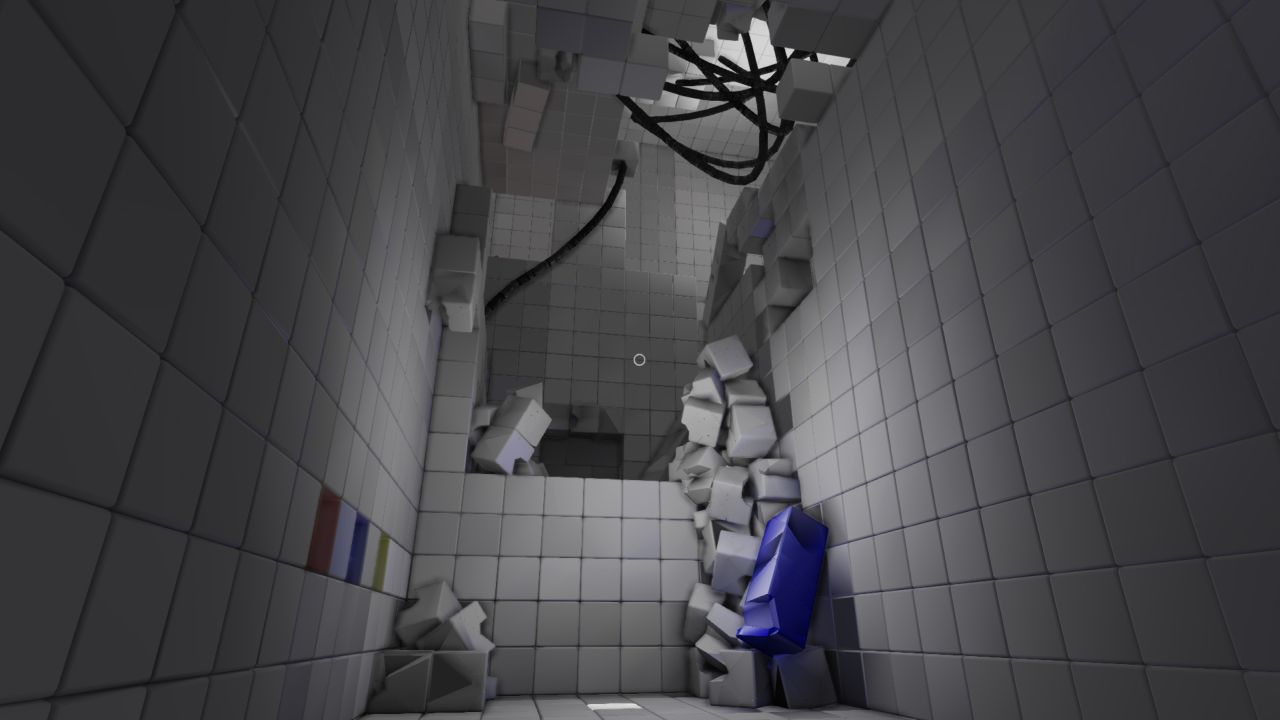 As another downside, Q.U.B.E. is definitely too short. It may just be that I have suddenly become a mad puzzle-solving genius, but I was able to clip through the game in about three hours. In the indie market, there has rightly been a bit of a reaction against judging games by their length. Mainstream games will sometimes tout excessive playtime hours over quality gameplay, and despite what the public may think, people who play video games are very sensitive to having their time wasted. But Q.U.B.E. doesn’t feel like a game that has been pruned down to the purest possible single player experience, and the feeling of accomplishment at completion of the game might have been more fulfilling if there had been more puzzles to complete along the way. Aside from this, the game has hardly any replay value or possibilities for further puzzling once the campaign is completed.

For all my minor complaints, this game is a must-play if you enjoy puzzlers. Good first-person puzzling is too rare a find these days to turn up one’s nose at such an enjoyable experience. If you aren’t a puzzle solver, there might not be much in this title to recommend it to you, but the aesthetic and gameplay are entertaining enough that it’s worth the experiment. This just might be the game that might make you fall in love with the genre.

Our ratings for Q.U.B.E. on PC out of 100 (Ratings FAQ)
Presentation
86
The pure white environment turns out to be neither lazy nor boring: the game keeps it interesting throughout.
Gameplay
82
Some of the puzzles are stellar, but some feel like hum-drum block pushing.
Single Player
79
The game has excellent puzzling fundamentals and changes the gameplay up to keep you on your toes. However, very little story, and the game is over in a heartbeat.
Multiplayer
NR
None
Performance
73
With only a few hours of gameplay, I got stuck three times in the environment. Didn't somebody check this?
Overall
76
This game should slake your thirst for first person puzzling, at least for a while, but it's not a breakout title. If you enjoy the genre, definitely give Q.U.B.E. a try.