Deus Ex: Human Revolution is a Shooter / RPG hybrid and prequel to the highly praised Deus Ex that was released over ten years ago. Set in 2027 you play as Adam Jensen who is surrounded by conflicts regarding the use of technology to enhance the human body above its natural limitations. Jensen has been mechanically augmented, not by his own choosing, after an accident at Sarif Industries. After six months recovering, Jensen is back at Sarif working as their chief of security. Another attack hits one of Sarif’s manufacturing plants and Jensen is set the task to infiltrate and save hostages. From here you begin to unravel the mystery of the attack that left Jensen crippled and find out just how high the conspiracy goes. 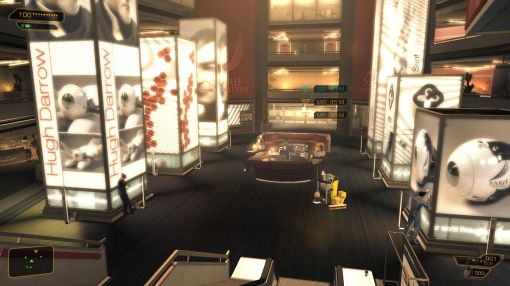 Human Revolution sets up a game world that allows you to fight, sneak, climb or hack your way to your objective. Played in first person with a third person cover system, you can regularly engage enemies on your terms or avoid them completely. Jensen’s Augmentation powers give him options to persuade, see through walls, hack high security terminals or fall to the ground without injury. The level design increases this choice by allowing you to approach scenarios from multiple directions. The two city hubs of Detroit and Hengsha provide the open framework for most of the game.
The city hubs Jensen moves through are visually diverse even if they occasionally feel empty. Artistically they are engaging, featuring distinctive designs and memorable use of lighting. The city hubs are quite large but consist mostly of narrow alleyways or tunnels connected to one another. Hengsha is further broken down into districts that invoke a fairly infrequent and short game load. The areas are still much larger than Invisible War’s shoebox levels and feature a good amount of verticality.
It’s unfortunate that there is some superfluous design in the city hubs and limited interaction makes them feel empty. Even rooms consist mostly of detailed, static items stuck to desks that don’t move under explosive force. You’ll notice this emptiness after visiting the same tiny back room in the sixth consecutive shop on the streets of Hengsha. Still there are many secrets to find and alternative ways around areas. The open nature of the city hubs propagates into the other locations allowing the player to adapt to the given mission design.
Player choice is important and Human Revolution gives you multiple ways to approach objectives. An example is trying to access a hidden alley way that holds crucial evidence in a side quest. You can walk through an electrically charged tunnel by stacking up boxes. The sewer system lets you enter the alley from deep below the city of Detroit. If you increase your strength augmentation a large object can be moved so you can easily jump the fence. You can even walk through a police station and gain access to the alley via a vent in the roof. This is a simple example but one that propagates through to the combat areas as well. 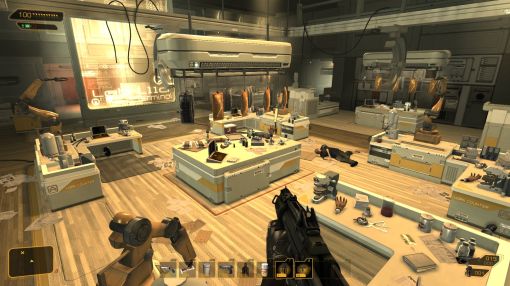 Most of the core action occurs outside the neutral city hubs, in warehouses or facilities that are important to the story. These vary in size and design so you never know exactly what you are in for. Jensen has a rudimentary 2D map system to help with navigation should you get lost. Some combat locations are open and feature gantries, cameras and laser fences. Other locations are heavily guarded, branching corridors in buildings that have plenty of vents to crawl through. The crucial aspect of having multiple approaches at each step is ever present. Once you encounter foes you can either engage them or sneak past them.
123Next