Bogged down with a few flaws, but otherwise an enjoyable exploration and platforming game

Tomb Raider makes me long for the days of the first PlayStation. I didn't really play many of the first Tomb Raider games, but Lara Croft always seems to remind me of that era. Appropriately, it was a simpler time for gaming and maybe that's why TR:U takes me back. Not to say that the game is simple in its mechanics, only simple in its premise. You're Lara Croft once again, there are some tombs for you to raid and treasures to find. While the game has some flaws, there are many things to enjoy in it as well. 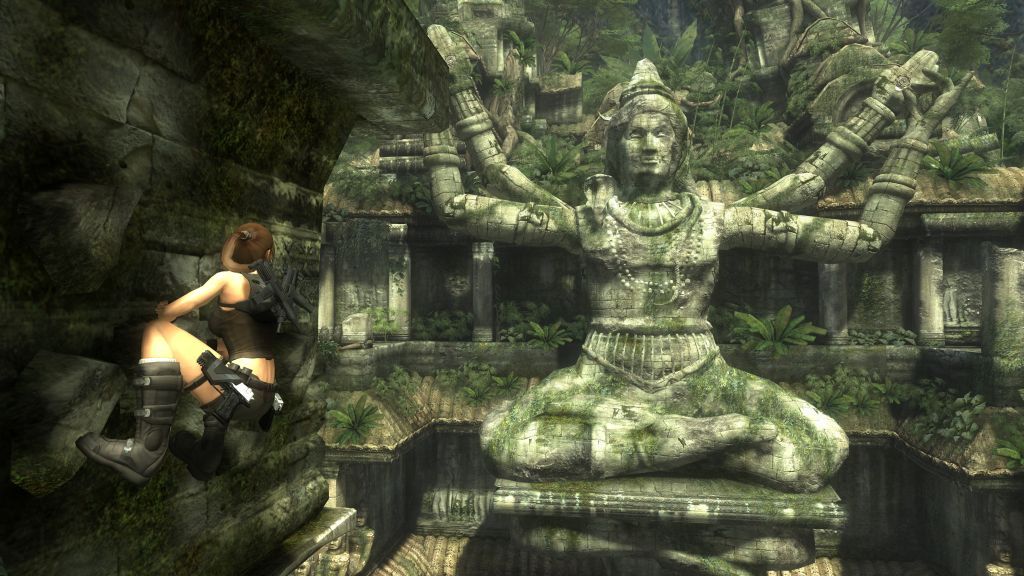 The game starts in Lara's mansion, which is consumed by flames. After being fired upon by one of her friends, the game's story backtracks to a couple days before the incident. We follow Lara's hunt for the fabled location of Avalon, King Arthur's resting place. It is revealed that her father, Richard James Croft, also went in search of the mythological place for it may hold clues to the disappearance of Lara's mother. In an underwater temple, Lara discovers a gauntlet belonging to the Norse legend, Thor. Before she can figure out its purpose, Lara is ambushed by a group of men in scuba gear. Her pursuit of the men leads Lara to a heavily guarded boat where she confronts two old enemies, Amanda and Natla, the immortal queen of Atlantis. From then on, the game becomes a race to Avalon. Lara discovers that she needs Thor's belt, hammer and second gauntlet to gain access into the place.

Mythology buffs will be happy to see many Norse legends being incorporated into the storyline. Lara finds many Norse and other cultures’ ruins underneath the temples, which is perfectly understandable. What's Tomb Raider without a little globetrotting? The storyline itself is progressed through cut scenes that happen in between large chunks of game play. They're fun to watch and don't go on longer than they have to. Another great way to expand on the story is by reading Lara's journal. Pressing select will bring up Lara's PDA which has her journal and a couple of other useful features. Usually after every major event or discovery a new journal entry is unlocked. It’s interesting to read how Lara tries to rationalize the supernatural properties of ancient myths. 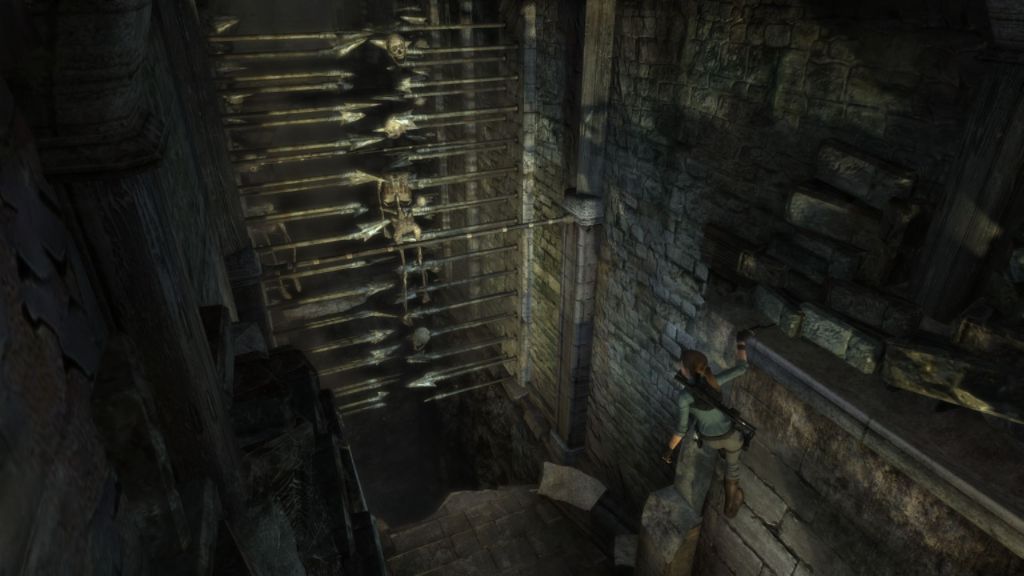 The controls themselves are pretty simple and straight forward. Press X to jump and climb over or Circle to crawl under the game's many obstacles. Triangle interacts with buttons, levers and switches while Square is used to latch onto things with her grappling hook, which becomes one of her most useful tools. One of the annoying things about Lara is that she cannot fall from a high place at all. If you think you can jump down to a lower platform undamaged, then you're probably wrong. This causes the player to put some more time into thinking about their next move. This isn't necessarily a bad thing; it just means that a few sections of the game may require the player to do some trial and error. I found telling which walls were climbable, and which were not, difficult at times. Underworld does have quite a few checkpoints throughout each level, which makes things a lot easier.

As mentioned before, pressing Select brings up Lara's PDA, where you can access another cool feature: field assistance. When X or Square is pressed, the player is given hints on what to do next. Other items, such as weapons, a flash light, a video camera and Med Packs are all used or switched around by assigned buttons on the D-Pad. Lara has a few weapons at her disposal, however she can only carry two at a time. Her outfit and weapon choice is selected at the beginning of each stage. I had to resist the urge to have her wear the trademark short shorts during every level. Although the clothing doesn't affect the game play whatsoever, it just wouldn't be practical for Lara to trek through the snow in shorts. Combat is handled rather simply, L2 is used to aim and R1 to fire. The player can also choose to hold down the R2 button and have aiming and shooting done automatically. Lara can also use her adrenaline, which allows her to pull off some head shots, but holding down the R2 button through combat sequences works just as fine. I believe that this type of simplified battle system puts more emphasis on the exploration and platforming aspects of the game. If you're looking for an all out action game, than you need to look elsewhere. Most of your time with Lara will be spent climbing, shimmying and jumping across the area. In a couple of the stages, Lara actually gets to ride a motorcycle. Sometimes it can work fluidly, but a lot of the time it seems like the game's clunky controls and wandering camera are working against you. 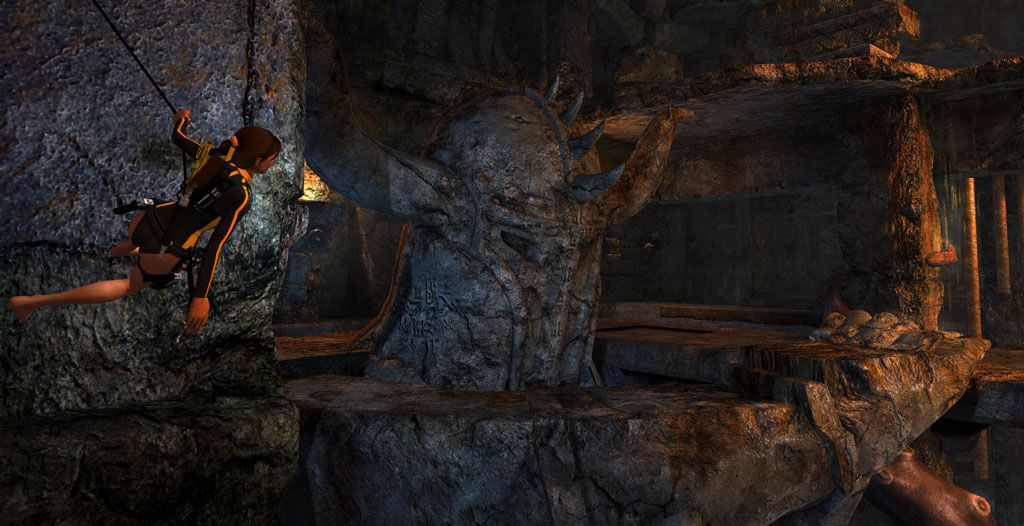 Tomb Raider: Underworld is nicely detailed but suffers from some graphical downfalls. Underworld experiences some frame rate issues and sometimes parts of Lara's body disappear into the environment when she kneels down to pick something up. If turned around too quick, Lara can actually get stuck in some parts of the environment causing the player to wiggle around the analog stick to free her. While these issues are minor and don't detract too much from the overall experience, they're still flaws that I feel shouldn't be there. If Lara crawls and jumps around enough, you can actually see her skin become dirty. It's a subtle but realistic effect that I began to appreciate. Lara, you dirty, dirty girl.

While not a totally action packed game, Tomb Raider: Underworld does have some redeeming features. If one can get past the graphical issues, inaccurate controls and a camera that doesn't always grant the player the best angle, there's some fun exploration and platforming to be had. The game itself is about 7 hours long in length, and also includes a Treasure Hunting mode that allows players to revisit locations to obtain missed treasure. I wouldn't recommend this title to a gamer that has an itchy trigger finger, for there's not a great variety of weapons or a lot of combat. This game is for someone who wants to explore ancient ruins, while uncovering terrifying secrets that can unravel the world from beneath our very feet. In the end, that's what Tomb Raider is all about.

Our ratings for Tomb Raider: Underworld on PlayStation 3 out of 100 (Ratings FAQ)
Presentation
80
The game feels and plays like a classic Tomb Raider game. The menus are easy to navigate and even offer hints on what to do next.
Gameplay
70
Inaccurate controls and a wandering camera interfere with some the game's platforming action.
Single Player
69
The game isn't that long, but tells the interesting story of Lara's search for clues to the whereabouts of her mother.
Multiplayer
NR
None
Performance
65
Suffers from some frame rate issues and graphical downfalls, as Lara can get stuck or disappear into some parts of the environment.
Overall
70
Tomb Raider: Underworld suffers from a few problems but otherwise it's an enjoyable game that will keep fans of the series entertained. It comes recommended to Tomb Raider fans, or those who are looking for a title focused on platforming instead of action.