A simple concept well executed, Killing Floor will appeal to those who simply enjoy shooting zombies

How much you enjoy Killing Floor, and how long you play it for, will be governed by one simple factor: how much do you enjoy killing zombies? If the simple act of shooting a variety of shambling, groaning monstrosities in the face is enough to hold your interest, you will find Killing Floor to be a diverse and highly entertaining experience with limitless replay value. If you want more depth to a game with more competitive modes and varied objectives, you will probably want to look at the Left 4 Dead series to get your co-operative zombie-killing thrills. 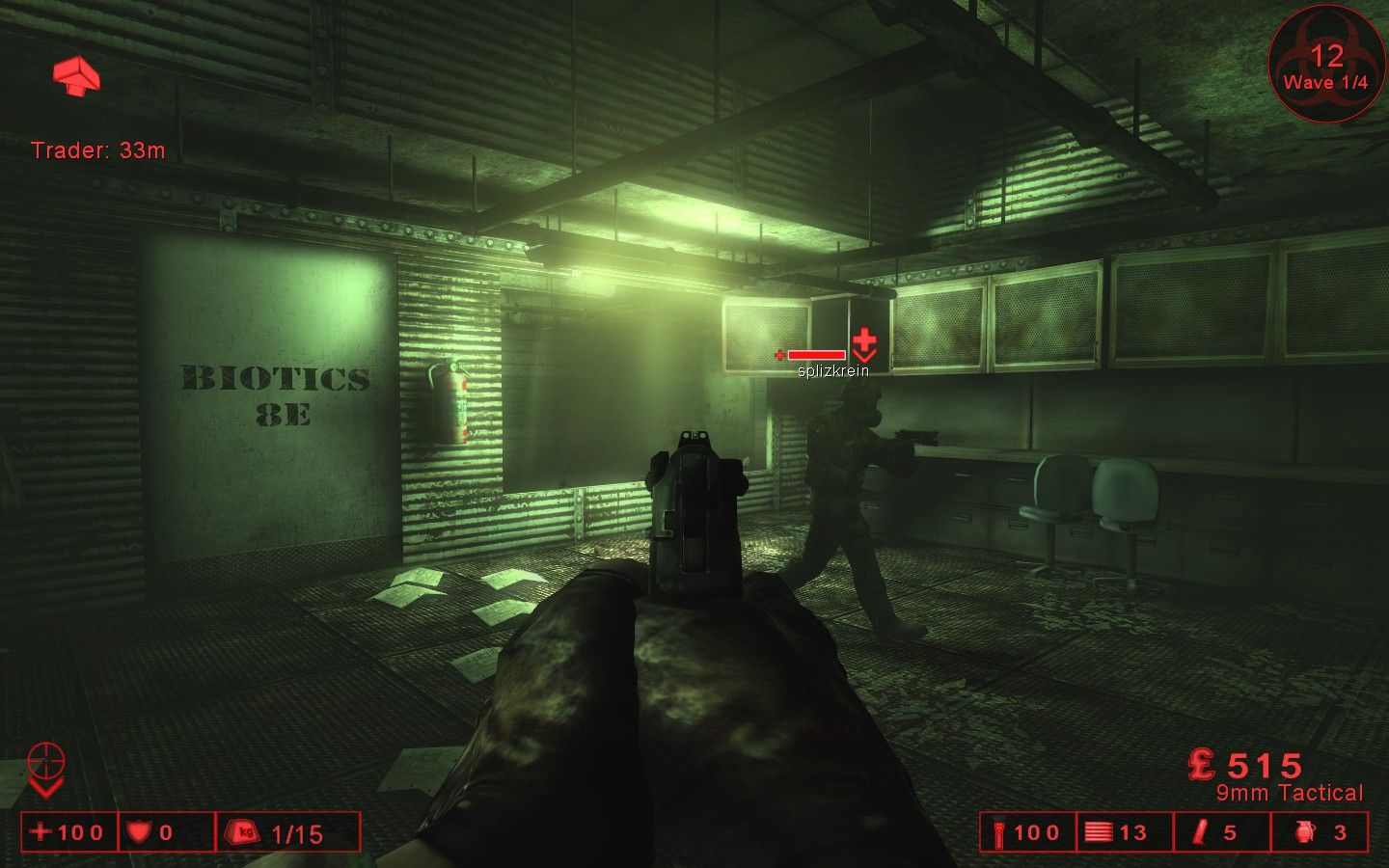 Killing Floor started its life as a simple mod, and its lineage shows with dated visuals and basic sound effects and voice acting. There is also no story or background information to speak of; you are simply dropped into a variety of levels and told to fend off increasingly large waves of enemies. Luckily there are a ton of embellishments to this simple formula, the 6-player co-operative play being the most prominent among them.

The structure of Killing Floor's one game mode is simple but fairly interesting. You start each round with only a pistol and a small amount of money. As you kill enemies, you earn more money. This money can be spent on improved weapons, armour, ammunition and explosives, but these purchases can only be made at the end of each wave in a store. If you die, you lose your equipment but it remains on your body so you can return and re-equip. There are also random weapon and armour drops throughout levels, although you will never find the more powerful weapons lying around.

You will choose a perk at the beginning of each round, which can be changed later on as the situation dictates. The perk you choose will majorly factor into your play style, since each perk not only increase your effectiveness with a certain set of weapons, but it will also reduce the cost of these weapons from the store which opens up at the end of each wave for a limited period of time. As you use each perk, you will level that perk up which will increase its effectiveness. For instance, a level one perk might give you an 8% increase in damage with a certain type of weapon and -8% off the cost of that weapon type. As you level this perk up, the amount of damage dealt will increase and the cost of the weapons will be reduced. This means that as you play more you will become more powerful which can increase your ability to play on higher difficult settings in longer games. 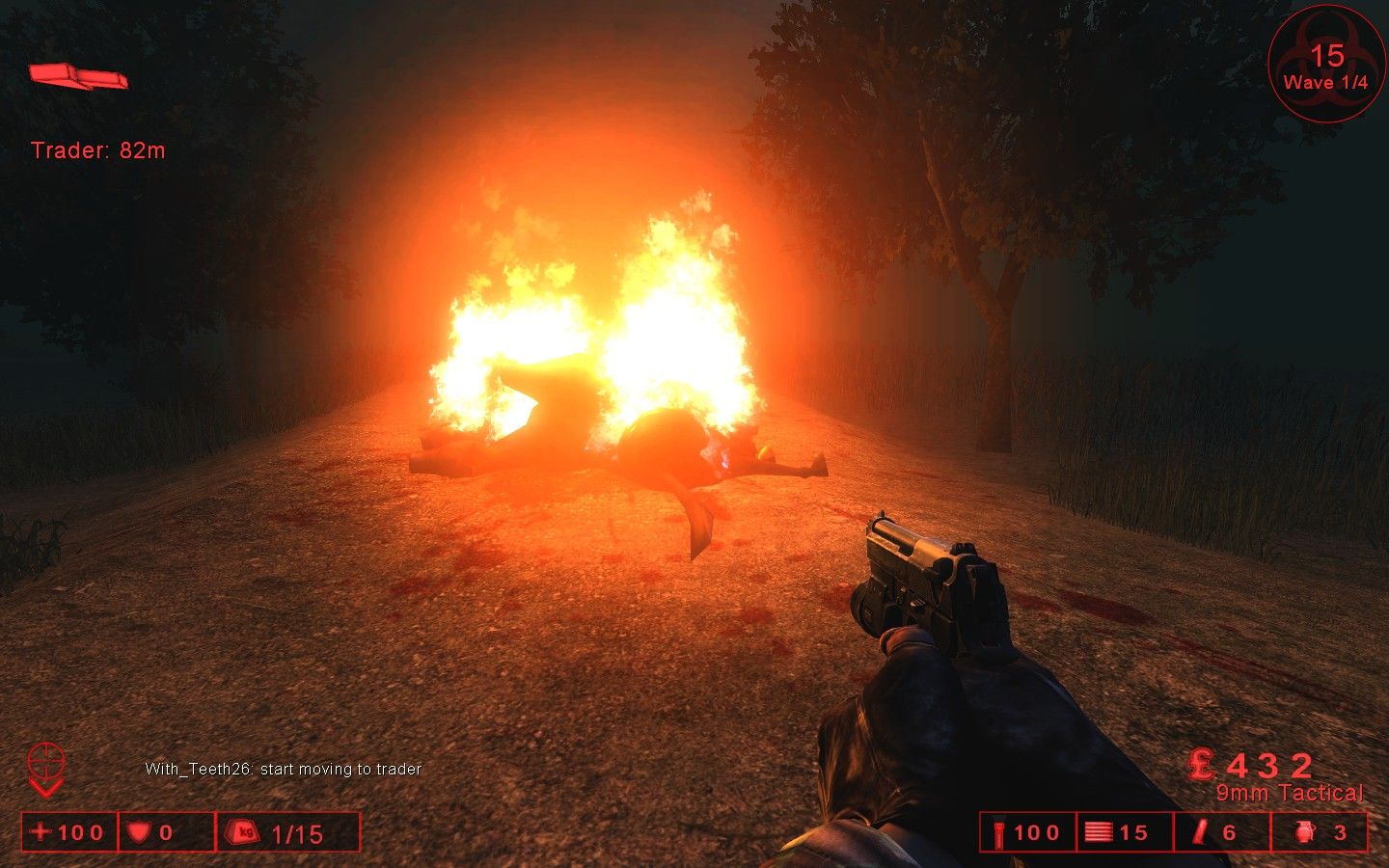 The maps that you play on are now highly numerous thanks to many free updates, and are also fantastically varied. The maps are expansive and offer lots of interesting areas to hole up in for defense. To aid in your defensive abilities you are given the option to weld doors shut to funnel zombies through a single opening. The zombies will eventually break down these doors so you need to worry about their integrity while fighting. You also have to take into account where the store will be located at the end of each round since it moves every time. If you are on the other side of the map when the wave ends, you might not have time to get to it and stock up on much needed supplies. This keeps each match interesting because you constantly have to move around in order to keep close to the next store location.

The actual gunplay in the game is pretty good, thanks to some great iron-sights and a fantastic variety of weapons. Flamethrowers, shotguns, grenade launchers, and assault rifles - among many others - round out your potential arsenal, and the perk system serves to make specializing in a weapon type highly fulfilling. Each class of weapons usually has a few different options that cost different amounts, and many weapons have secondary fire modes that take some time to learn and use effectively. It is also worth noting that each item you purchase has a certain weight, so you need to think carefully about what you want to spend your limited resources on.

Another factor making Killing Floor interesting is the variety of enemy types. On top of the standard humanoid zombies are a good number of more interesting varieties. Crawlers are insect-like creatures that crawl around on the ground at high speeds and often in high numbers. If you aren't careful you can easily get overwhelmed and killed by a group of them. Stalkers can turn invisible and sneak up on you, but with the Commando perk you can see them while cloaked when they get closer. Bloats are large, inflated looking zombies that will spew corrosive bile on you if you get too close. Sirens will walk around and occasionally scream, if you get too close this scream will hurt you and cause any grenades to explode pre-maturely. 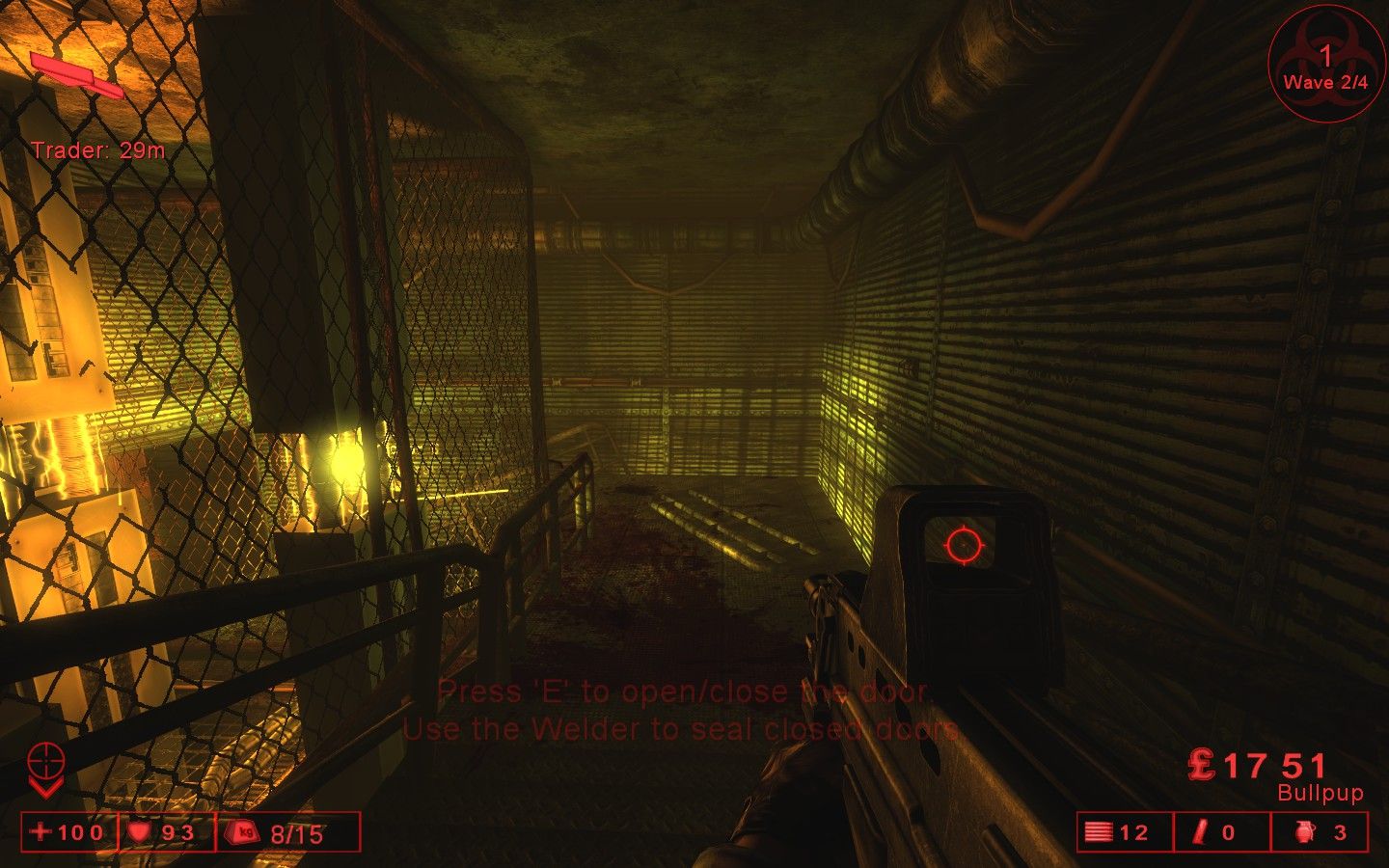 In later waves you will encounter two of the more dangerous enemies: Scrakes and Fleshpounds. Scrakes are tough, chainsaw-wielding foes which will charge at you and deal massive damage if you don't manage to kill it from a distance. Fleshpounds are even more dangerous, and will become infuriated when wounded and go into a rage causing massive damage to anyone it comes into contact with. Near the end of longer games these enemies tend to show up in groups of two, making for some harrowing and exciting battles. If you manage to complete all waves in a round, you will have to fight the Patriarch, the biggest, toughest and most powerful enemy in the game. The Patriarch can turn invisible, is equipped with a mini-gun and rocket launcher, and also has a devastating melee attack. It takes co-ordination and the right combination of perks and weapons in your team to take this guy out on the higher difficulty levels.

Killing Floor is a game that is clearly designed around co-op play, yet many of the mechanics that enforce this are fairly subtle compared to other successful co-op titles. For instance, if you die during a game you are simply dead until the next wave starts; there is no mechanic for revival. Yet if you try and play Killing Floor on your own you will probably be overwhelmed early on since zombies tend to come from many sides at once. You need to plan with your team mates about where you want to hole up for a wave, and who is going to defend what entrance. Communication is key since the aforementioned tougher foes require everyone to focus-fire until they go down.

The health system also encourages you to stay with your team-mates; each player is equipped with a small healing device that restores a portion of your health. It can be used an unlimited number of times, but requires a small amount of time to re-charge. If you use it on yourself, it will have to fully recharge before you can use it again. If you use it to heal a team-mate however you will be able to use it twice before having to let it recharge. All of these aspects come together to make a game that requires teamwork and communication to succeed, and the game can be surprisingly challenging and engaging even when everyone is working together. 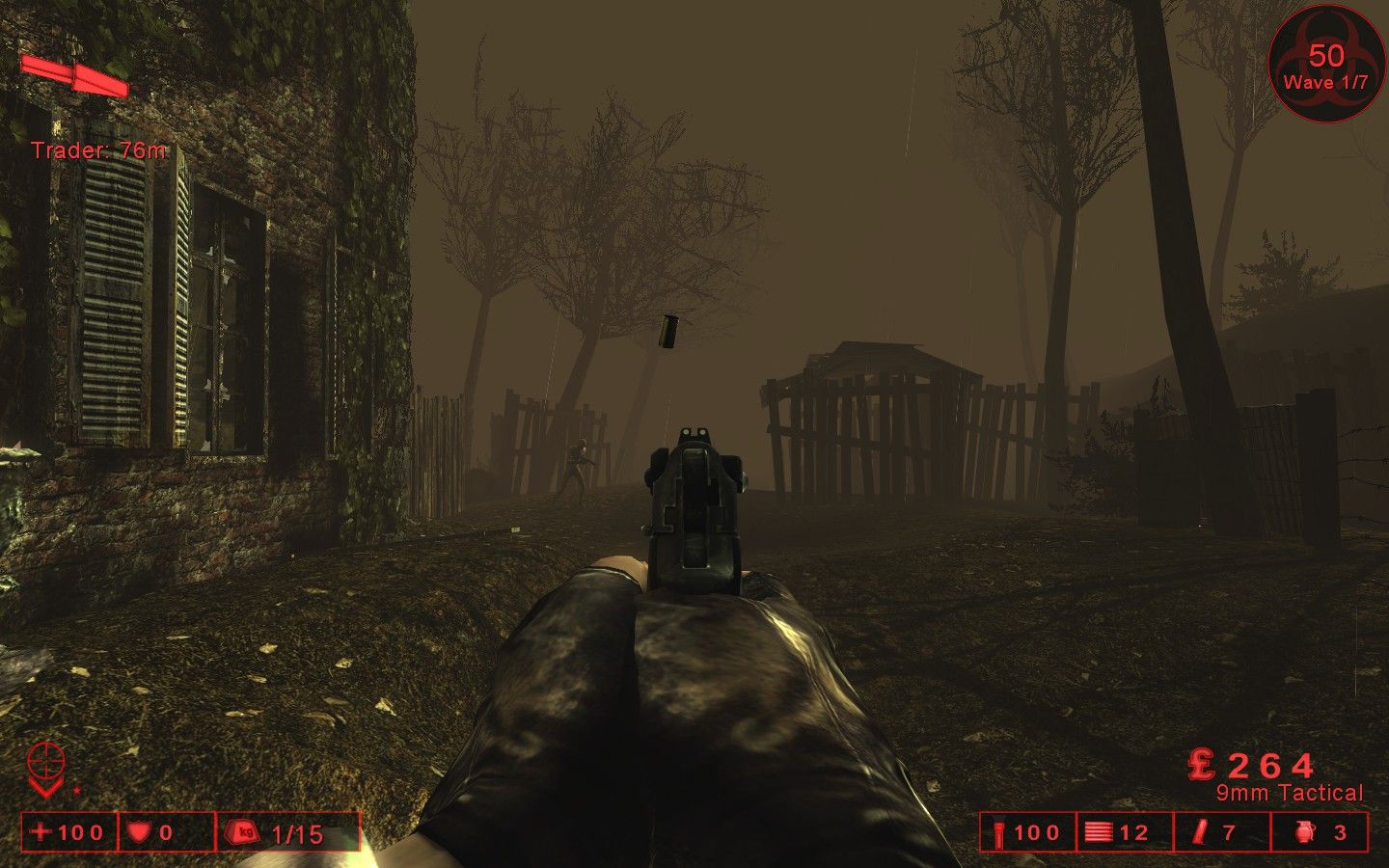 While I mentioned earlier that Killing Floor looks dated, it certainly doesn't look ugly. The large, detailed levels and dim, moody lighting instill an eerie atmosphere, one propagated by the fact that you can only use your flashlight with your pistol. The textures are fairly blurry and the character models and animations are crude, but the upside of this is that it will run well on older systems. The game also features an overwhelming number of options, including an advanced graphics options tab and comprehensive control and sensitivity options. The audio is decent with different zombie types making different sounds and weapons sounding more or less like they should, although the voice acting and writing is poor and occasionally irritating. The soundtrack is heavy metal instrumentals, it works well enough with the game but isn't particularly interesting.

Killing floor is a straightforward game that succeeds at creating a fairly simple yet entertaining co-op survival-FPS experience. The economy system is well balanced, and the large number of weapons, perks and maps make for a large amount of play time if the gameplay holds your attention. If you are looking for a simple but fun game to play with some friends, there are worse ways you could spend $20.

Our ratings for Killing Floor on PC out of 100 (Ratings FAQ)
Presentation
75
The visuals are a bit dated but detailed maps and moody lighting make up for this. The audio is fairly basic, with good weapons sounds but poor voice acting.
Gameplay
80
The shooting mechanics are very solid and the different perks and weapons make for a fun experience with significant longevity.
Single Player
50
While you can go at it alone on the various survival maps, it is overly difficult and doesn't work too well. Killing Floor is essentially a multiplayer only title.
Multiplayer
83
Teamwork is essential if you want to survive on higher difficulty settings. Killing Floor is great fun if played with friends.
Performance
(Show PC Specs)
CPU: Intel Core 2 Duo e7200 @ 3.1ghz
GPU: Powercolor Radeon HD 5850 PCS+
RAM: 4GB DDR2
OS: Windows 7 Ultimate 64 bit

80
The up-side to the dated visuals is that the game is very easy to run on the highest settings. There are, however, some connectivity issues with hosting local servers.
Overall
77
A fun, simple co-op zombie-shooter that will appeal to those who relish the simple act of shooting things in the face. 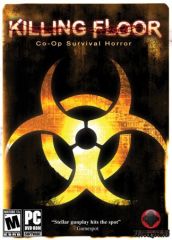 Our Review of Killing Floor
77%
Good
The Verdict:
"A simple concept well executed, Killing Floor will appeal to those who simply enjoy shooting zombies"
Game Ranking
Killing Floor is ranked #650 out of 1646 total reviewed games. It is ranked #42 out of 69 games reviewed in 2009.
649. Ratchet & Clank: Into the Nexus
PlayStation 3
650. Killing Floor