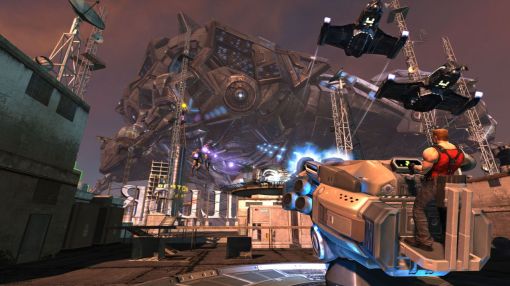 The very first thing you’ll experience in Duke Nukem Forever is the game’s lengthy load times. Between every one of the fairly short levels, you’ll find yourself sitting, waiting, and wandering around before coming back to play the game. There is even a stutter between the Press Start command and the actual main menu coming up as if simply displaying a few more lines of text may be a bit too much for the Duke.
Before and after one brief firefight, players are treated to a pretty vast number of interactive objects in what is probably DNF’s best integration of a Duke Nukem game mechanic standard. While here it is mostly useless from a story or gameplay perspective, there are certain special items that you can interact with which will give you an “ego boost,” raising your maximum health. This is a fun way to work in collectibles of a sort, while also giving players an additional reason to mess with all of the objects available. Most of them are somehow tied to either Duke’s personality (such as bench pressing 800 pounds, shooting a basket, and admiring yourself in the mirror) or its downright ridiculousness/offensiveness (microwaving a rat). It is undoubtedly the most unique mechanic in the entire game and something I hope they hold onto in future Duke Nukem titles. 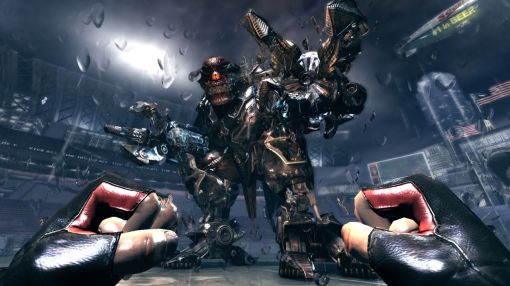 Unfortunately, not much else in Duke Nukem Forever is very well done, unique, or redeeming in any way. After the first few levels, a vast majority of the interactive objects have already been passed and the game is required to stand on its gameplay mechanics, enemy AI, and level design to keep the player entertained. DNF fails at this in almost every regard. In what feels exactly like the mix-matched game of mechanic and design catch-up that it is, you’ll find yourself playing through bland corridor shooter levels, vehicle courses, jump pad levels, momentary physics puzzles, and much more (trust me, the list goes on and on). While variety may sound good on the one hand, it is the fact that Duke Nukem Forever fails to ever do any one of these things well that is its ultimate downfall. Coupling this with the game’s extreme spikes in difficulty and lackluster graphics, I found myself losing any and all interest within the first three or four levels, forcing myself to continue on simply for the sake of this review.
12Next