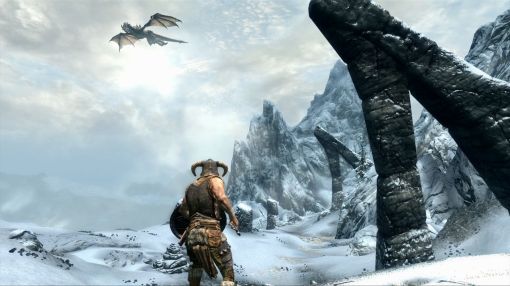 As we advanced through the mountain forest, a few enemies appeared. They were quickly dealt with using a few sword thrusts on the wolves, and some arrows from our bow to dispatch the human bandits. When a single bandit remained, the player switched back to a sword and shield combat, and showed off the new kill cam in the game. As we continued further down the road, the details in the world were very subtle but impressive, such as fish trying to swim upstream, small animals scattering around the area.
To make things a little more organized and streamlined, the main menu has been narrowed down to just four major categories, from where further options could be accessed. For example, by going to the inventory screen, each item that you’ve found can be viewed in 3D and rotated in almost every direction, which is quite cool and gives you a chance to see the full design. Similarly, all books can be opened and read as if they were a real object in the world. Specific items such as weapons or spells can be assigned into a favorites category, which acts like that of a web browser – these items will be ready for quick access during the game.
By looking up into the sky, the character development screen appears in the heavens. It has all the various character progression traits and other stats available, presented in a very sleek way via star formations. Each skill has a further perk tree, represented by a single star in the cluster. When accessing the map, it is now a very high zoom above the real time terrain, letting the player view the world from the sky. Fast travel will once again be available to all locations that were previously discovered.