A solid racer that adds noteworthy features to the franchise

MotorStorm: Apocalypse is the third major title in the PlayStation 3 exclusive Motorstorm series, and it promises to shake up the series with new mechanics and a fresh setting. While the previous entries were focused on off-road racing, Apocalypse takes the action into a destroyed city, which also introduces a dynamic element to the competition. Thanks to the track deformation and other events that occur during the race, there is a lot of variety to be had here. The controls are still somewhat unique and require getting used to, as there are 13 different vehicle classes to choose from. Though it borrows some elements from other racers, Motorstorm Apocalypse makes up with polish what it lacks in originality.
Apocalypse is a more story-driven experience than previous installments. At the core of the game’s single player is the Festival mode, which tells the story of a competition that spans two days. The narrative is told from the perspective of three participants in the Festival, named Mash "The Rookie", Tyler "The Pro", and Big Dog "The Veteran”. As such, players get to experience the same Festival from three different view points, all intertwined and eventually leading to an overall conclusion. Needless to say, the story is very simplistic and with extremely basic dialog. It serves as nothing more than a way to string races together, but it’s better than navigating a menu. 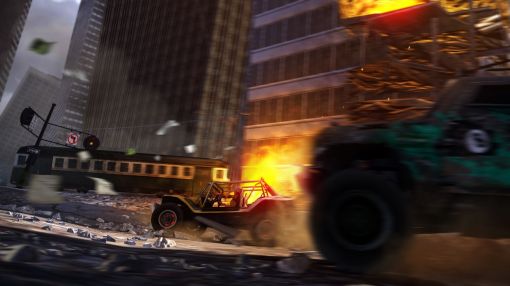 As mentioned, this is the first MotorStorm title to take place in an urban setting. Though the series has always been about offroad racing, this new locale doesn’t stop the game from showcasing its signature racing style and intensity. The ‘Stormers arrive to the dock of a collapsing city that continues to crumble through the campaign, which is also home to two warring factions of humans. These two human factions are also a new element to the series, which introduces a new element to the game. The races sometimes take place in the heat of battle between the two sides, causing additional mayhem and even adding to the car’s heat meter, thus introducing additional challenge to the racers.
But of course, the big feature of the game is track deformation. If you’ve played last year’s Split/Second, then things won’t be too surprising here. However, what Apocalypse may lack in originating the idea, it more than makes up for with stylish presentation and polish. The destruction seen in the game is on a much grander scale than anything else you’ve seen before, and it’s presented with enough finesse to really make an impression. Buildings collapse, the already-deformed streets crumble even further, producing new routes and obstacles. The races are also intelligently designed – most are for 3 or 4 laps, and the real changes don’t start occurring until the last lap. This throws a real curve ball, as the track you’ve learned after the first couple of laps becomes almost unrecognizable.
123Next 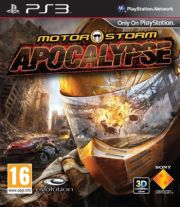 All videos for MotorStorm: Apocalypse (1)
Advertisement ▼