The puzzles themselves are fantastically varied; they start out simple and gradually become increasingly complex as more and more variables are introduced. Cubes, buttons and lasers all make their return from the first game, while light-bridges, springboards, gels possessing various unique qualities, and independent gravity tunnels all appear as new mechanics. Of course the portal gun is at the center of any puzzle, and it remains totally unchanged from the first game, but it is still a brilliant tool that is used in a variety of interesting ways. Also of note is the fact that the puzzles are no longer relegated to test chambers, as with the exhilarating final level of Portal 1 you will often use the portal gun to solve environment-centered puzzles. As you navigate the vast under-workings of Aperture laboratories you will solve situational puzzles that require just as much ingenuity as those in test chambers. 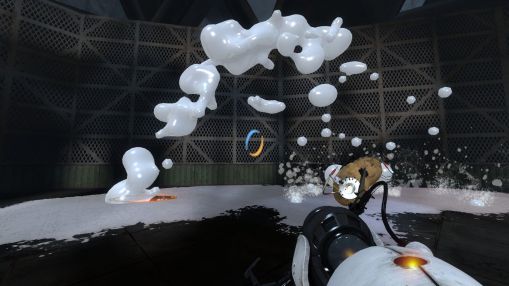 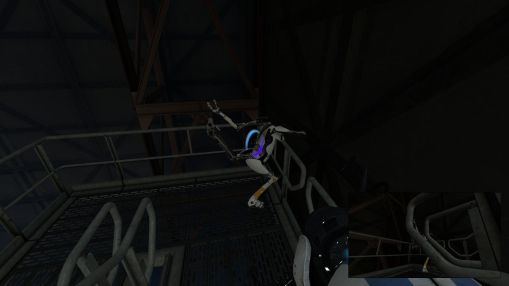 When high-speed dance moves go horribly wrong
You will need to co-ordinate carefully and communicate comprehensively if you want to get through all of the available levels, of which there are about 40. While the game does a good job of providing different methods of letting you show each other what you are thinking via an in-game pinging system, voice chat is definitely the best way to go when trying to solve complex problems. Many puzzles involve both players having to perform an action with very specific timing, and while there is an in-game countdown tool, screaming “1, 2, 3, NOW” over a mic is usually more effective. Much of the fun from this mode also comes from messing around and shooting portals under team-mates are aiming lasers at them while Glados reprimands you all the while. There are a number of gestures you can perform to lighten the mood, and there are even items that can be bought via micro-transactions such as skins and hats (as in Team Fortress 2) but given the relative brevity and lack of replayability of the co-op campaign these seem like a bit of a cash grab.
Prev123Next

Our Review of Portal 2
89%
Great
The Verdict:
"Marred only by its brevity, Portal 2 is an exemplary puzzle game that will have you chuckling and banging your head against the wall all at the same time"
Game Ranking
Portal 2 is ranked #35 out of 1669 total reviewed games. It is ranked #4 out of 105 games reviewed in 2011.
34. Flower
PlayStation 3
35. Portal 2