Having entered the realm of realism-focused racing with 2009’s NFS Shift, the Need for Speed team has decided to continue this spinoff by dropping NFS altogether and simply naming the sequel Shift 2: Unleashed. The original Shift was a decent attempt by EA to capture the sim fans, but it faltered somewhat when it came to the driving physics and some of the gameplay progression. Still, it was a decent spinoff series that held promise and dream of one day competing with the Gran Turismo’s and Forza’s of the world. Unfortunately with Shift 2, the series fails to move on, presenting a barely revamped game that does nothing to advance the franchise forward. After the successful arcade reboot of Hot Pursuit, Shift 2 is an entry that puts a dent in the future hopes of this sim spinoff. 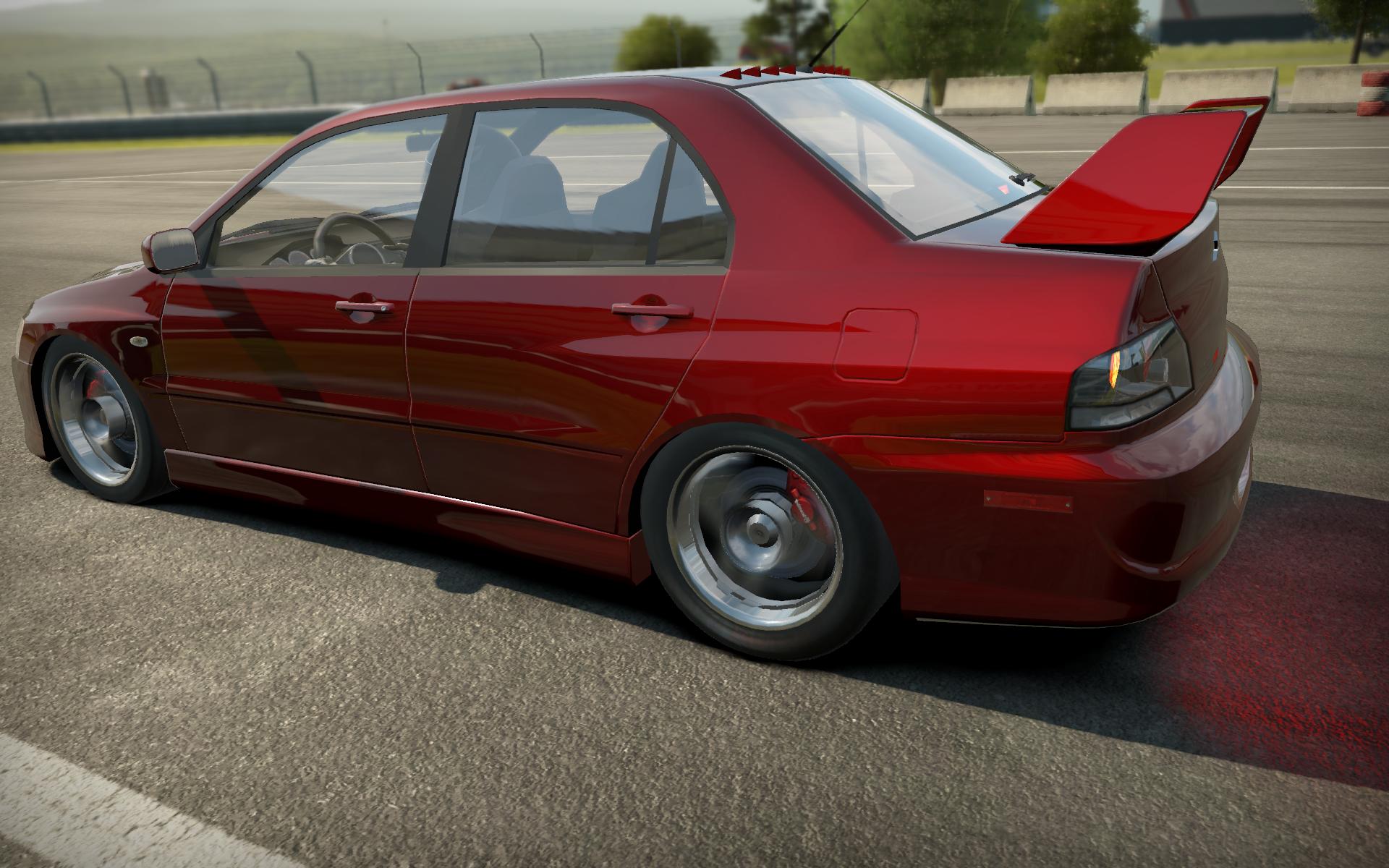 Much like the original, players are once again tasked with starting their career as a pro race driver and working their way to the top, through various tiers and competition disciplines, in hopes of reaching the World Cup. The narrative is still thin, providing little reason to advance from one race to the next except for making money and earning XP. At least this time around, there are real world drives who help guide you along (as in Dirt 2), and actually have live action movies instructing you on the events. It gives the game at least a little more personality to grab on to, compared to Shift where a faceless instructor was instructing the player before each race.

Not alot has changed in the career mode of the game. Players are still able to progress through the events at their own pace, with the ability to play races that are unlocked in any order. Events range from drift, to time attack, to regular lap races across the similar set of tracks from the previous game. The dual-experience system has been thankfully ditched in favor of a single driver XP progression. Players will continue to earn experience not only from completing races, but also performing certain actions on the track. Driving cleanly, setting good lap times, keeping to the racing line, and achieving high speeds are all factors that add to the driver’s experience earned during the race. These elements remain a dynamic feature of the game which adds a new element to the racing itself.

Winning races and gaining experience will unlock new tracks and cars. The cars featured in the game vary widely in performance and are ranked into 4 tiers. There are around 60 cars in the game, ranging in performance and brand. Pagani Huayra is exclusive to the game, alongside it the usual suspects of Corvettes, Lamborghini's, Porsche's and more. All of the cars feature a detailed interior, which is a nice touch. Players can still upgrade their cars in a wide variety of ways in order to boost their performance. However, there is a clever system in place whereas applying all possible upgrades on a car is often impossible without forcing it into a higher performance class – rendering it useless for lower end competitions. This means players must think about what upgrades are most important, and what combination will provide maximum allowable performance for the car class, without exceeding it. For the hardcore fans, the game still features a deep tweaking system that allows for very detailed setting adjustment. 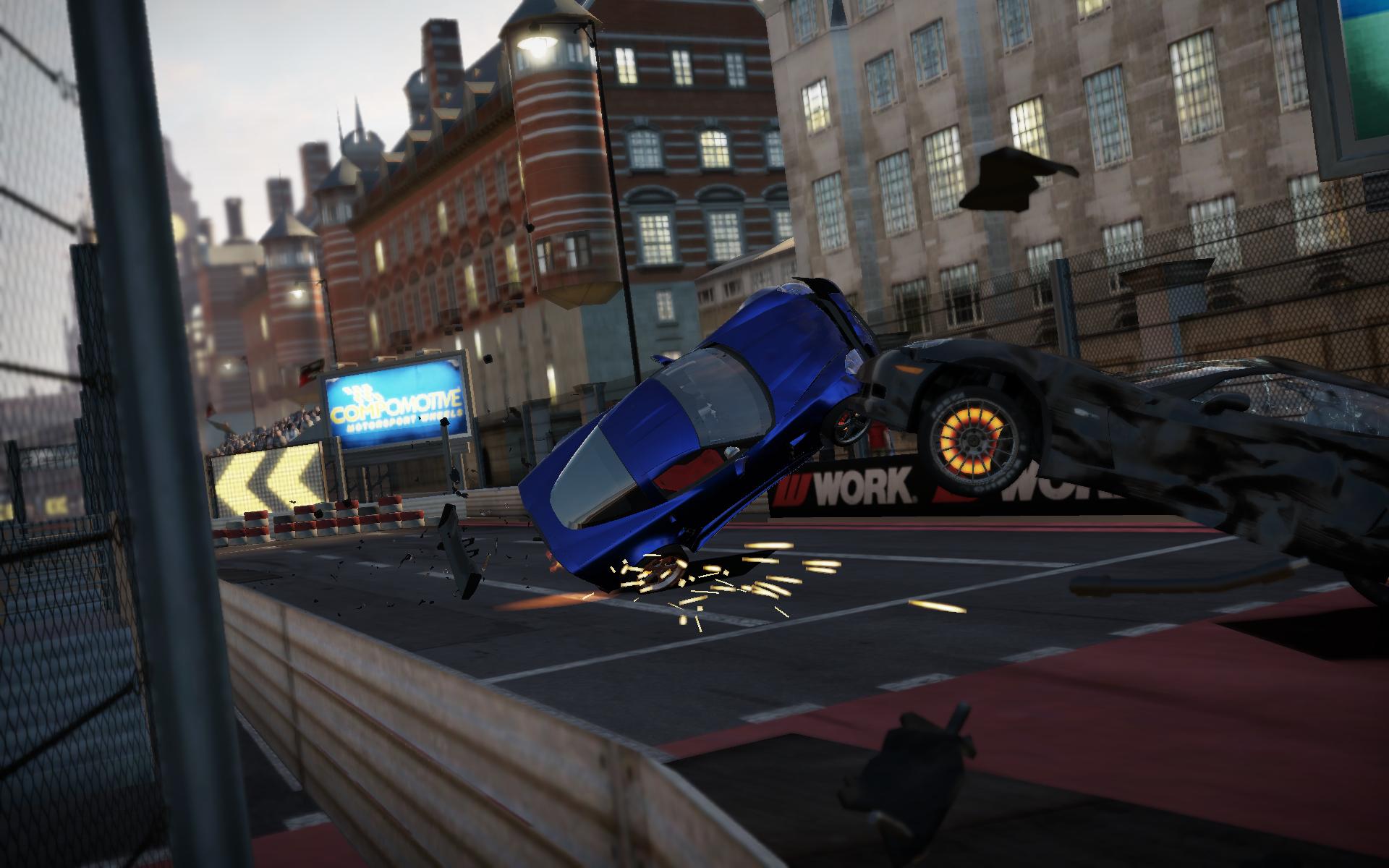 On the track, players should be on familiar territory. Most of the tracks are from famous locations such as London, Madrid, Tokyo and others. If you’ve played any recent sim racers, or even the original Shift, there’s not much new here. What is different, however, is that a lot of the tracks are available in night time mode. This adds a whole new thrill to the racing as you try to simply stay on the road. There are very few visual assists when driving at night, so taking things carefully is key – for the human players anyway. AI doesn’t seem to have much of a problem racing as if it was daylight.

In general, the AI remains a problem point for this series. The original Shift had opponents who were able to outpace you in a lesser vehicle during straight-aways, and here is no different. During races, opponents drive the same class of car as the player, but there are no further points of comparison - there’s no way to tell how many performance upgrades your opponents have, or what their overall rating is. This leaves the player in frustration, often unable to beat the opposition even when driving perfectly. Only when you’ve maxed out your car within the class, does your car become competitive. Even so, opponents that are able to pass you will often zoom away into the distance, as if on rails. They also seldom crash, and are able to recover very quickly and catch up to the player – in other words, “rubber banding” is quite a noticeable problem.

As for driving physics – the game is still trying to find a middle point between sim and arcade. Though controls feel a little tighter than Shift, the sequel still struggles to properly recreate the feeling of driving a real race car. Handling sometimes becomes unresponsive and other times wildly oversteers (especially in drift events). It’s unclear why EA is still trying to appeal to arcade fans with the physics in this series – they would be much better off providing a completely sim experience. Inconsistent driving combined with static and rubber banding AI means that most of the races are simply not that much fun. 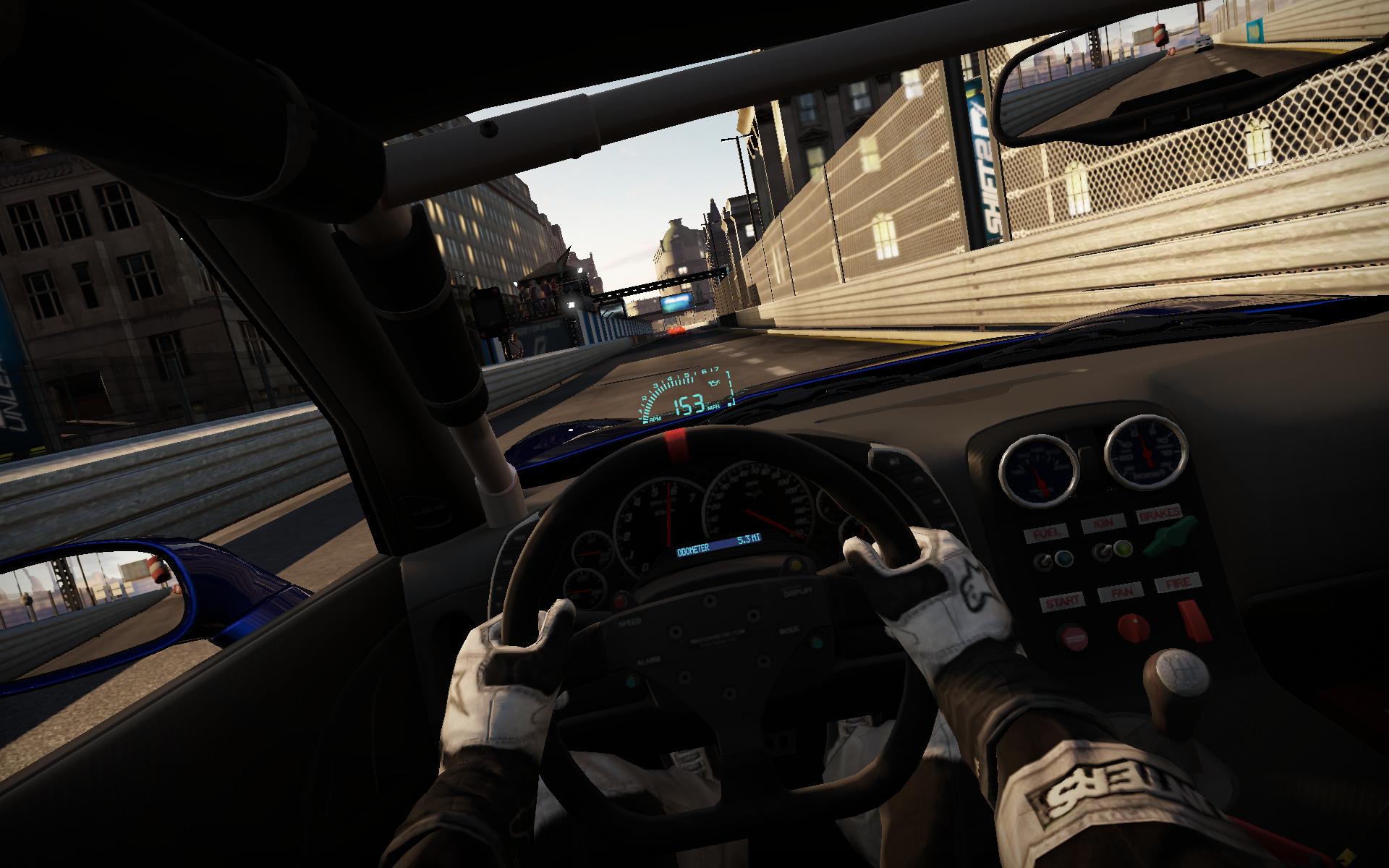 When all else fails, the game wants players to crash. And crash hard. Claiming that the game features a “driver’s experience”, Shift 2 must have a fairly poor opinion of professional drivers. When scraping against other vehicles or barriers, the game enforces a tunnel-vision effect, whereas all colors wash out and the camera shakes a bit. Crash with enough speed – and it looks like your driver has had a black & white seizure. Forget trying to think about actually recovering from the crash and steering back on the track – the player’s view becomes so completely disoriented, it’s impossible to see or react. So you’re stuck there, waiting for the view to normalize so that you can assess the damage and continue or abandon the race. It’s a feature taken too far, forcing so much realism that it outweighs any fun that could have come with it. There’s also a very annoying effect that occasionally, without reason, splashes a bunch of dirt on your windshield – even with nobody in front, and driving on asphalt. The game also has a helmet cam, new to the series, but it only further obstructs your view, and becomes disorienting as it swings into corners as you drive.

To go along with the crashes is a decent damage system. The game provides an option for full or visual only damage, and since the former is far too punishing and unpredictable in the damage sustained, most will likely play with the latter setting. Cars do look fairly beaten up, depending on the force of the crash, with bits and whole body parts flying off. It doesn’t quite have the detail of something by Codemasters, but it’s still a good damage model that has a realistic enough effect on the cars. It becomes really interesting at night – if you bust your headlights, it becomes a whole new challenge. Add to that the crash effects, and you could be staring at a black, shaky screen a lot more than you probably want to.

With multiplayer, many of the features of Shift carried over, but this time Autolog has been added into the mix. Much like with Hot Pursuit, Autolog helps brings friends together by constantly offering new races to try, records to beat and others to challenge. It’s easy and quick to get in touch with friends who are playing, but the issue of finding new friends remains a problem. The system is fairly limited when it comes to getting to know random opponents during online races, and adding new friends to the list. Online races overall function in much the same way as career mode, the lag is fairly limited and all XP earned goes towards your overall driver progression. 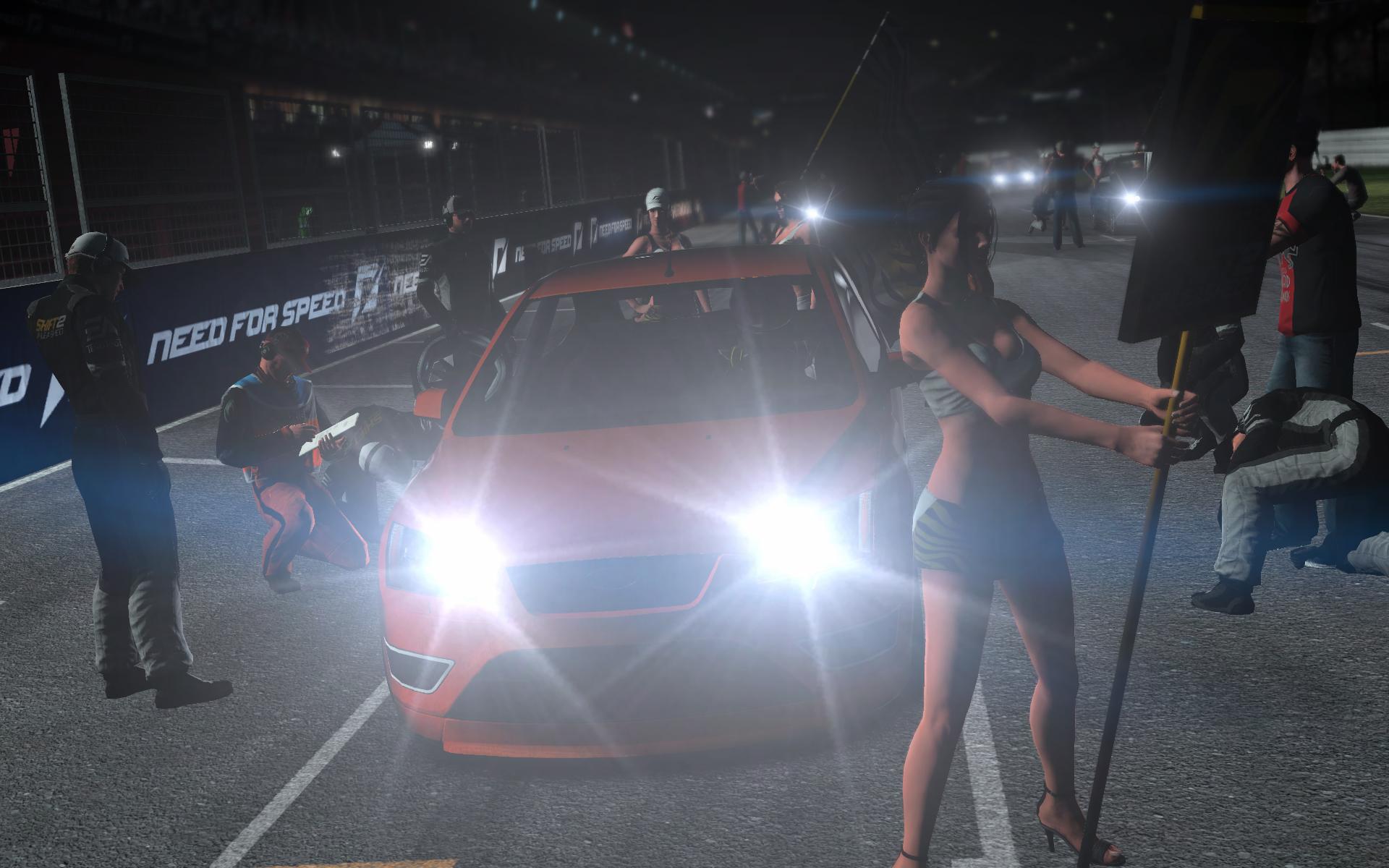 On the technical side, the game’s a bit of a letdown. It looks nearly identical to Shift, which looked good two years ago, but lacks a visual punch in 2011. With all settings cranked, there are still many low resolution textures in the background, including spectators. Cars themselves look good for the most part, but even with forced AA there are still jagged lines across the vehicle models. There are also technical issues, particularly when it comes to performance – the game struggles to keep even 30 frames per second when running on all high settings on our powerful test machine. Dipping as low as 17 frames/second at times, there is a clear issue that EA may or may not work out with a patch. The problem seems to affect both ATI and Nvidia cards, but not all models, so it’s a crapshoot if the game will run well for you.

Audio in the game is forgettable, as songs only play during menu and loading screens. At least, there are some very unique mixes of popular songs that you may recognize. The engine audio produced by the cars is often hard to differentiate from one another, though it’s satisfyingly loud. For some reason, there is also a helicopter that seems to be constantly buzzing overhead during a lot of races, adding an unnerving sound loop. Overall, the sound design is quite basic and offers little to the experience.

Shift 2 feels like little more than a rehash of the previous title. Given the respectable development time, fans were right to expect more. The presentation changed a bit, but it’s nothing that propels the series forward. Graphics and sound remain pretty well the same. Gameplay tweaks have been made, but the series is still chasing a formula that other franchises have nearly perfected. The addition of night racing and an improved damage model are neat, but hardly groundbreaking for the series, let alone the genre. If it’s your first try at the series, it’s not a bad choice, but there’s little to be found here for existing fans to warrant a purchase at full price.

Our ratings for Need for Speed Shift 2 Unleashed on PC out of 100 (Ratings FAQ)
Presentation
74
Narration is improved a bit with addition of videos from real drivers, but otherwise little has changed. The audio design is rather forgettable, and the graphics engine hasn't stood the test of time very well.
Gameplay
79
While the controls have been tightened up, the driving still feels either loose or unresponsive at times. The improved damage model looks good, but can be inconsistent.
Single Player
84
The career mode is still fairly lengthy and offers the freedom to undertake races in any order. A single driver experience progression is a welcome change.
Multiplayer
83
Autolog makes a debut for the series, and with it brings better interactivity options for existing friends. Making new contacts remains troublesome, but at least online play is relatively lag free.
Performance
(Show PC Specs)
CPU: Intel Core i7 CPU 930 @ 2.80GHz
GPU: Sapphire Radeon HD 5870 Vapor-X 1GB
RAM: 6GB DDR3
OS: Windows 7 Professional 64-bit

70
Some serious performance issues have been experienced by our own test system, as well as numerous user reports across the web. Apart from that, the game is without glitches or crashes.
Overall
78
Barely managing to set itself apart from the original, Shift 2 Unleashed is a barebones sequel that brings almost no significant elements to the franchise. It's still a decent racer for the uninitiated, but there's too little value here to recommend it to Shift owners. 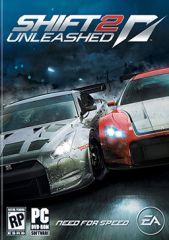 All videos for Need for Speed Shift 2 Unleashed (3)
Advertisement ▼