Many players will recall Dragon Age: Origins with fond memories. It was a staple of the RPG genre for BioWare, and though it had some issues, most players were able to get behind the classic formula. Combined with a good story and characters, it was a great start to the franchise. Arriving less than two years after the original, Dragon Age 2 (DA2) is actually best described as a revamp of the franchise. Questions must be asked, of course, why the developers would spend so little time on the sequel, as well as decide to reboot the franchise on just the second title. There are similarities in DA2, and they are unsurprisingly among the best parts of this sequel. Had it been a spinoff title, this RPG would have likely found a solid place among action RPG fans, on consoles in particular. As it stands though, you can’t help but compare this to Origins and see just how much was lost in translation.
Unlike in Origins, players in DA2 will no longer select from a series of characters each with their own background story. This time, players must take on the role of Hawk, a refugee who fled the nation of Ferelden during the events of Dragon Age: Origins. Upon arrival in the neighboring state of Kirkwall, Hawk and his family find themselves locked out, and must work off the debts of their uncle before they may enter the city itself. From there, Hawk is thrown into various political and military situations, with player choices once again affecting the outcome of the story. 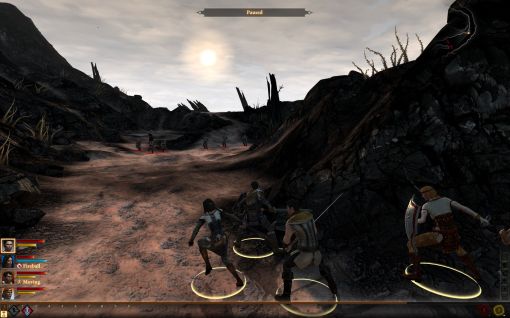 At this point, it’s clear that this is a much more streamlined narrative experience, as players will no longer get a choice of how the world responds to their actions based on their past. There are some new conversation options if playing as a mage, but that’s about it. The game doesn’t necessarily suffer from a lack of races and backgrounds to play as, but it’s a noticeable omission from the previous game. On the plus side, Hawk is an actual character that players can relate to and who’s able to speak. This adds to the narrative in the long run, compared to Origins, adding immersion to the experience.
The story itself takes place over 10 years’ time, but don’t be fooled into thinking that this makes it any more exciting. Years pass by in simple cutscenes that tell a short tale of what happened in the meantime. There’s no affect on the gameplay world, at all, and the narrative would have had the same effect if it was 1 month or 1 year that passed by. This was a real opportunity for the game to take a shot at changing the game world, be it locations or characters, to make it a game where time has a strong impact. As it stands, the story could have happened over the course of a one year instead of ten, and players wouldn’t have noticed. Clocking in at under 20 hours with most of the side quests complete, the game’s significantly shorter than Origins, around just half the time taken.
1234Next

Our Review of Dragon Age 2
75%
Good
The Verdict:
"Following a solid debut, the Dragon Age series takes a step back as the sequel attempts to reinvent the formula that only needed tweaking"
Game Ranking
Dragon Age 2 is ranked #758 out of 1633 total reviewed games. It is ranked #80 out of 105 games reviewed in 2011.
757. The Last Remnant
PC
758. Dragon Age 2