Dungeons, found outside the city, play a fairly significant role in the game as they are oft visited during the main story as well as side quests. And it does look alright, if linear. That was a singular “it” indeed – there is merely one dungeon in the game to explore outside of the city. Yes, you read that correctly. One. By what ungodly power BioWare thought they could get away with doing that, is beyond me. Players will get to explore this one short dungeon multiple times; with the only things being different are the enemies and the start/exit points. It’s seriously appalling to see a renounced developer actually ship a game with something like this. It’s a single small dungeon with absolutely no variation of light, textures, or even resource spawn points. But it doesn’t stop there – inside city walls, players will also get a chance to visit some underground sewers and basements – which also look very much alike. Considering this fact, and summing up the rest of the game world, it’s safe to say that players will be able to visit and fully explore every single location in the game in under 2 hours. Comparing DA2 to Origins at this point is simply embarrassing.
The music and voice acting are sufficient – nothing really stands out. When it comes to voiceovers, the actors do a great job of creating the various accents across the characters you get to meet. The dialogue is fairly basic, but the actors do the best with what they’ve got. On the other hand, even though the voice acting is technically efficient – it never quite has any real emotion behind it. Perhaps it’s the somewhat rough facial animations, but there’s never a real sense of characters and their passion during dialogue. It can also be argued that none of the characters are as memorable as those from Origins – likely due to a lack of a coherent story to tie them to a vital role in the player’s mind. 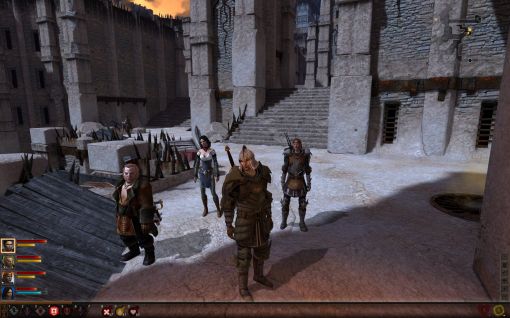 One area where DA2 surpasses its predecessor is the visual department. Running on a further improved engine, the game looks quite good for most of the time. By downloading the high resolution textures patch and cranking the game’s settings into DirectX 11, Dragon Age 2 becomes a very good looking game with some impressive texture work and sharp character models. Still though, the game world is filled with lower resolution textures that stand out more noticeably when everything surrounding them has been maxed out. There are some problems with DX11 performance, causing unsteady frame rates and technical glitches – but it doesn’t add a whole lot to the game, so DX9 is a good alternative. Given the game’s wide variety of options, it’s easy to get it running even on older PCs, and it still looks good.
There’s a very notable trend with BioWare these days. Mass Effect quickly springs to mind – a game whose sequel went through a number of significant changes but still ended up on top. Unfortunately, while ME1 to ME2 was a renovation of the franchise, DA2 is a reinvention. And it simply doesn’t work. From a short campaign to simplified inventory and dialogue, Dragon Age 2 has taken radical cuts at every step. Some changes are for the better, such as revamped skill trees and tactical templates – and it goes to show that the best parts of DA2 are those that closely resemble Origins. It might forever remain unclear why BioWare decided to completely rebuild the franchise instead of growing and expanding on it - as it stands, this would have been a decent spinoff RPG project. Once the game took on the sequel title however, comparison are to be drawn, and it simply can’t stand alongside the great Origins that came before it. In a year where major franchises are planning new entries; Dead Space 2 and Little Big Planet 2 have already shown us how a great sequel can be done – Dragon Age 2 stands as an example of how not to do it.
Prev1234
Our ratings for Dragon Age 2 on PC out of 100 (Ratings FAQ)
Presentation
75
The game's story feels broken up and isn't engaging enough to draw the player in. The voice acting is technically proficient, but often lacks emotion.
Gameplay
77
The changes to combat and loot could be welcomed by some players, but in the end it's feature streamlining that goes a step too far.
Single Player
75
The campaign is under 20 hours long, and doesn't offer as much varied replay value as one might expect. The story feels disjointed, and friendly AI still suffers without precise micromanagement.
Multiplayer
NR
None
Performance
(Show PC Specs)
CPU: Intel Core i7 CPU 930 @ 2.80GHz
GPU: Sapphire Radeon HD 5870 Vapor-X 1GB
RAM: 6GB DDR3
OS: Windows 7 Professional 64-bit

84
The game showcases some great visuals, but there are a few performance problems and bugged quests.
Overall
75
Dragon Age 2 is a decent RPG in its own right. However, as the game is a sequel to the superior Origins, it simply pales in comparison. Some players may appreciate the changes introduced, but most will be left disappointed with this rushed and oversimplified sequel.

Our Review of Dragon Age 2
75%
Good
The Verdict:
"Following a solid debut, the Dragon Age series takes a step back as the sequel attempts to reinvent the formula that only needed tweaking"
Game Ranking
Dragon Age 2 is ranked #754 out of 1623 total reviewed games. It is ranked #80 out of 105 games reviewed in 2011.
753. The Last Remnant
PC
754. Dragon Age 2