There will be players who appreciate the change in combat (console players in particular), but when it comes to PC users there’s likely to be some frustrations. The battles are now faster, and feel less tactical – enemies spawn out of thin air quite often, leaving any strategic and positional party planning go down the drain. The mages are still overpowered, with a number of Area of Effect spells that can decimate enemy groups very quickly. The bosses are still disproportionally powerful, leaving your group to hack away at them for 10 minutes at a time.
There are changes in gameplay that will be welcomed by everyone, though. For example, the Tactics are still an important part of the game. Setting up your characters’ action trees still feels tedious at times, and they remain completely useless if no attack conditions are met. At least though, there are now pre-set tactic layouts based on the character’s available skill sets – it’s a welcome addition that eliminates the requirement to build tactics from scratch. Skill trees have also been revamped into a much nicer layout so it’s easy to track your character’s abilities and upgrade weaker areas. 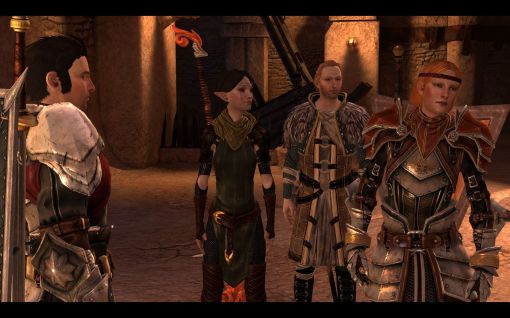 The inventory has been overhauled and now presents a better way to manage your items based on categories as well as a personalized star rating of the item’s usefulness to a particular character. Unfortunately, things have been streamlined too much in some cases – no longer are players able to customize their companion’s armor. It can only be upgraded via arbitrary rating system. The customization still extends to accessories and weapons though – but even so most items purchased from vendors are restricted to Hawk, leaving you to find weapons for companions elsewhere.
While the original game was an expansive epic tale that concerned the whole kingdom, Dragon Age 2 focuses on just a single city and the surrounding areas. Thus, the game feels rather small and restrictive. Ferelden is not that breathtaking to look at, with fairly simple architecture and no memorable locations. The game offers the players to explore the city either during the day or at night – with only differences being lighting and lack of NPCs. It’s really an artificial way to present the players with an alternative game world to explore, but it’s the same exact city so the effort falls flat. The outskirts are a bit more reminiscent of Origins, featuring open (though not very detailed) areas and multiple paths through. This is where players will encounter additional environments to explore.
Prev1234Next

Our Review of Dragon Age 2
75%
Good
The Verdict:
"Following a solid debut, the Dragon Age series takes a step back as the sequel attempts to reinvent the formula that only needed tweaking"
Game Ranking
Dragon Age 2 is ranked #754 out of 1623 total reviewed games. It is ranked #80 out of 105 games reviewed in 2011.
753. The Last Remnant
PC
754. Dragon Age 2