Bionic Commando: Rearmed 2 is a follow-up title to the 2008 remake of the classic NES title, Bionic Commando, which offered updated graphics and a few tweaks to the gameplay and level design, as well as various difficulty options that made it at least slightly more forgiving then the original title. That said, it was still quite the challenging game, and that hasn’t changed terribly much with this sequel, though the difficulty is somewhat lessened due to some new control options and other factors. For myself personally, while I’ve only fairly recently got into the series, I find it overall enjoyable, as I enjoy the swinging mechanic of the games, which I feel is largely where most of the appeal of the series comes from, and at the least that is preserved here in this installment. 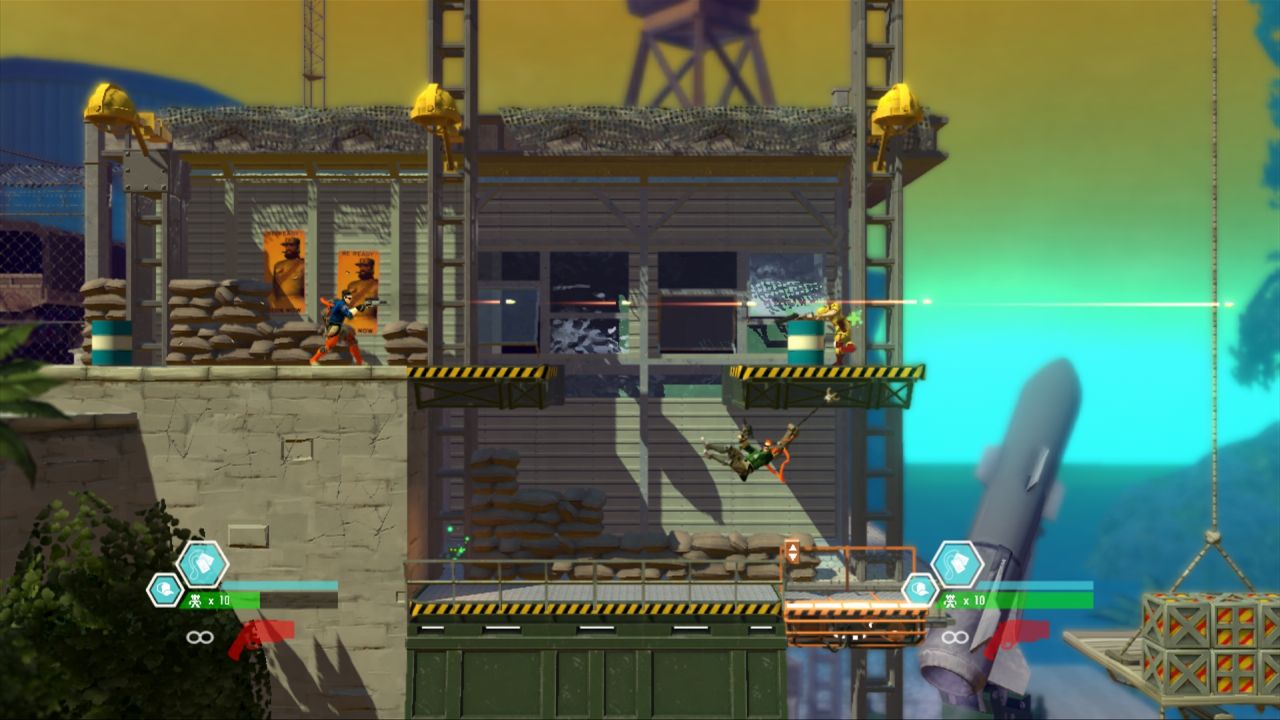 The presentation of the game is for the most part very similar to the first Rearmed title, though there are some key differences that set it apart. The most readily apparent change is that Rad Spencer now sports a mustache, though a more significant difference can be found in the level designs of the game, specifically in the variety of settings and backdrops that can be found, though overall the areas feel a lot larger and more open than do many of the levels presented in the first game. Sound design is solid enough, though not really much different from what was offered in the first game, with the exception of a boring and far inferior main theme, as far as the music goes, which could to some degree be said of most the music in the game, which is decent but ultimately kind of forgettable.

Gameplay is also overall similar to the original Rearmed title, though there are some updates to the controls that make things a little more easy, or at least suffice in general to take the blame of accidental deaths away from the somewhat clunky control scheme of the original game. That said, the controls aren’t perfect, and some added game design choices, not adequately coupled with proper controller shortcuts, work against this title in taking away some of the action and ultimately a little bit of the fun away from the game. One significant change in the controls is the ability to jump, which may be upsetting to Bionic Commando purists, however it is overall possible to get through the game using only your bionic arm (and there is an achievement for doing so, as well), though there is at least one boss fight that makes it impossible to do this without getting hurt by one of its attacks.

Other changes in the way the bionic arm is operated works at the same time to make it a little more fluid to use, but at the same time somewhat complicates the control scheme in a negative way, especially for fans who are familiar with the way the bionic arm worked in the first Rearmed game, as well as probably the original NES version. Also, while switching your main weapon out can be quickly and easily handled by using the right and left bumpers on the controller, there is no short cut for switching your active or passive upgrades. This means pressing the “back” button on the controller in order to switch out your abilities, which is overall largely unintuitive and presents a decisive break in the action, marring the pacing of the gameplay considerably. 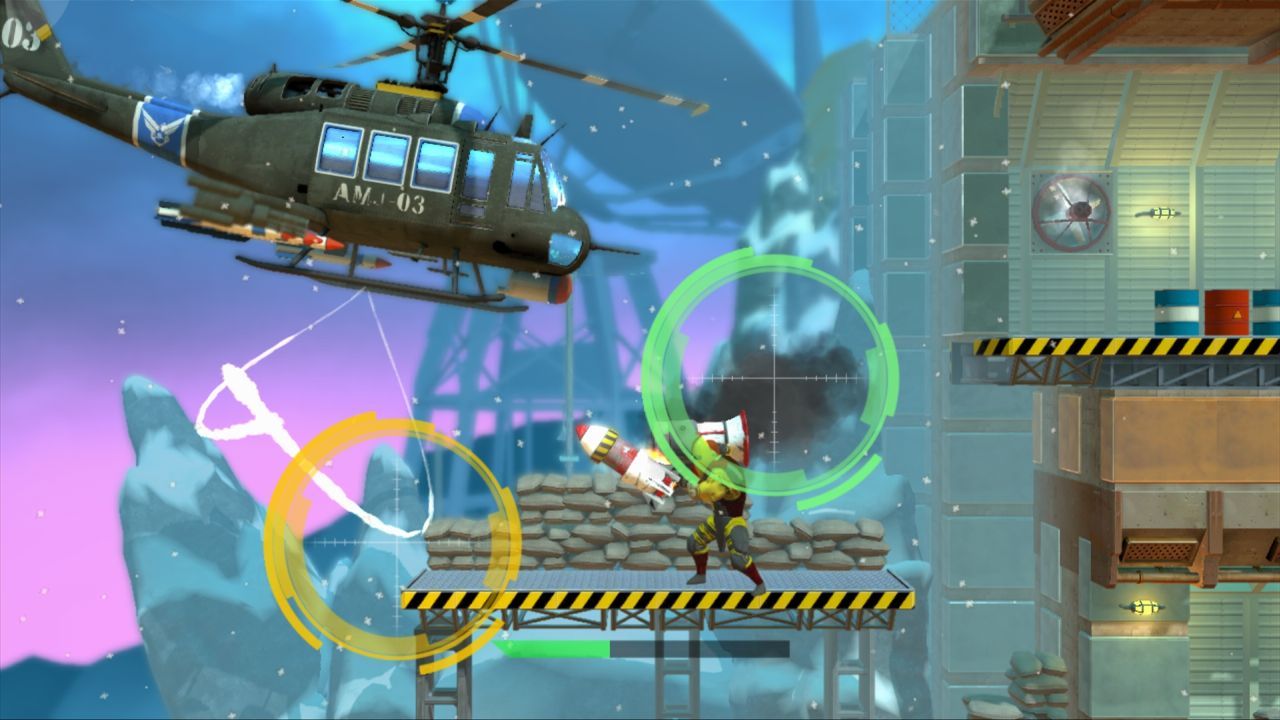 The game overall runs smoothly but there are a few noticeable bugs in the game. The minor ones are only barely observed, such as some odd flickering of lines in the quicksand texture as well as other random occurrences in relation to rag-doll physics and the like. The worst bug I found though while pursuing an optional side path in order to pick up one of the secret pickups, which each time resulted in the game freezing and locking up my Xbox, which meant restarting the console and replaying the level, ultimately skipping over that pickup in order to progress in the game.

The single-player experience is on the whole an enjoyable romp of interesting levels and rewarding challenges. All of the levels can also be played in co-op mode, however the way that is structured makes it clear that this game is first and foremost meant to be a single-player experience. The main problem is that the players don’t have the freedom to explore the levels on their own, and have to stick close to their partner, especially whoever is playing second fiddle, as moving ahead or falling behind results in a countdown timer, the end of which means losing a life.

Overall, while the game does go to some steps to make the game easier than its predecessor, especially where some of the controls regarding the bionic arm are concerned, the whole package overall feels inferior to the original Rearmed title. Some of the choices made regarding the design seem geared towards bringing in new players, however ultimately those who are already fans of the series will be those who get the most out of this title. Certainly fans of the series would have more likely been happier with controls and gameplay aspects a little closer to the first title, especially in regards to the use of the bionic arm, particularly for purists who prefer using it as an alternative to jumping.

Our ratings for Bionic Commando Rearmed 2 on Xbox 360 out of 100 (Ratings FAQ)
Presentation
83
The graphics are fairly nice, especially the variety of settings and backdrops, though nothing particularly awe-inspiring. The music is overall forgettable, though the sound design is solid.
Gameplay
75
While some effort was made to make the controls feel more fluid, there is still a lot of awkwardness in this game, and the absence of quick-selection for the active and passive abilities break up the gameplay too much.
Single Player
78
While the game is overall fun and the level designs are enjoyable, there's nothing particularly exceptional to be found here, and at the end of the day the first Rearmed title is a more rewarding experience.
Multiplayer
72
This should really be a single-player game, especially since the way co-op is set up seems bound to create frustration, at the least for the second player.
Performance
NR
Overall the game runs fine, but there are a few occasional glitches, as well as a game-freezing, system-locking bug.
Overall
78
Bionic Commando Rearmed 2 is fun, though it is ultimately fans of the series that will be the most pleased. Those interested in the series should check out the original Rearmed game, despite it being a bit more challenging. 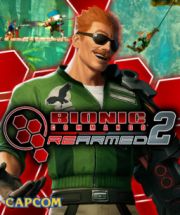