Stacking is a charming adventure game about Russian babushka Dolls. You play as Charlie Blackmore, the smallest doll in the Blackmore family. Unfortunately Charlie’s siblings and parents have been taken by an evil Baron doll. As the smallest type of doll in the Stacking world you can freely jump into any larger doll roaming about. Once inside you can use their special abilities to complete simple puzzles. The puzzles make it feel similar to older adventure titles with clever solutions. The unique nature of the cascading dolls sets it apart when you discover each of the doll’s abilities. 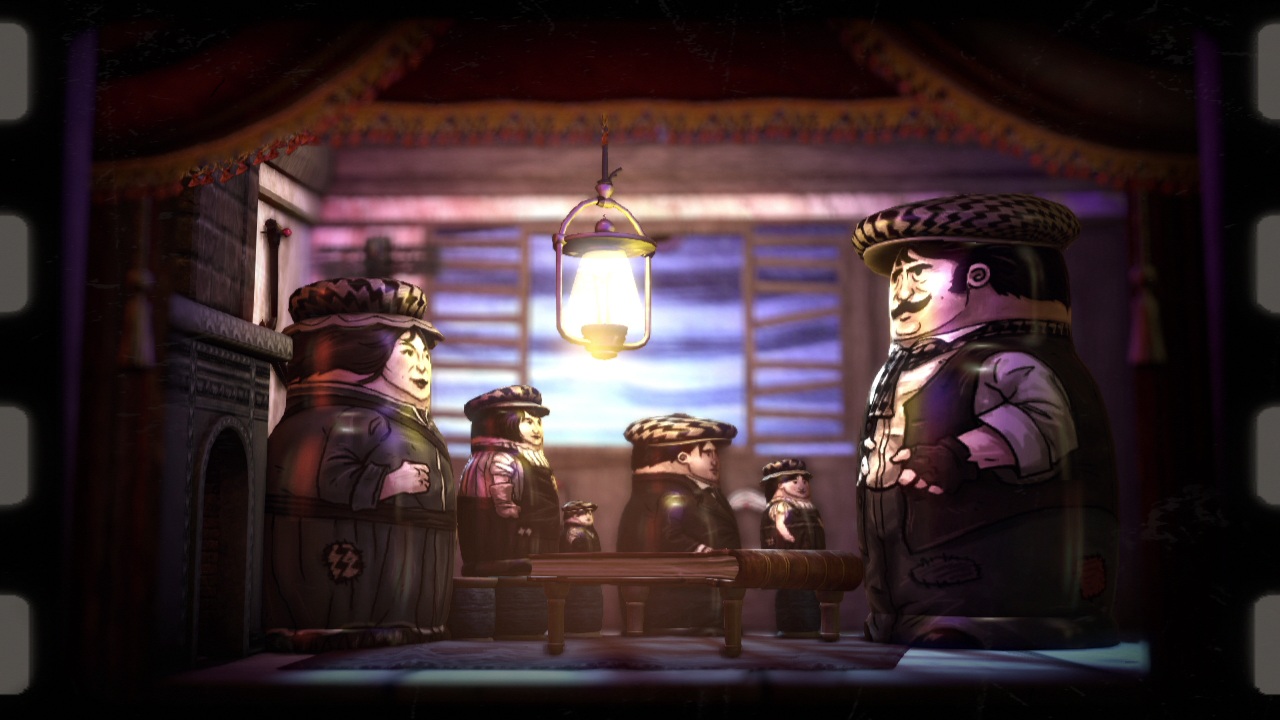 Each doll you enter will have some unique ability; most of them are just basic actions. These abilities will be used to solve the problems presented in the game. Basic doll abilities include glove slap, uppercut, handshake, cry, insult, photograph and seduce. Some dolls have more interesting flow on abilities. One doll plays the pipe to attract rodent dolls that you cannot stack into. Another will perform a magic trick to make objects disappear. There are dolls that emit foul or pleasant orders and even dolls that pollute the area. There is a fantastic range of doll abilities with many funny moves that solve the puzzles presented.

The puzzles in Stacking are simple in that you generally only need to use the action of one doll on another doll or object. For example you might contaminate some soup and give it to a guard. Maintenance dolls allow you to interact with special objects, allowing you to enter a sealed vent. You can even use a balloon doll to find an air draft to soar onto a high ledge. Maybe your doll will toss some bananas to distract a monkey. For every puzzle there is usually one easy, clearly presented, method of completing it. You won’t need to travel far or think to solve each of the puzzles using this simple method. Some solutions are also easier than you may think.

Each of the puzzles can be solved up to five times using different dolls and their special moves. In general you are making certain dolls go somewhere else to trigger a story element. Most of the solutions require only a few steps. Going back and finding the other ways to complete each of these small objectives is part of the fun even if not all of them are completely logical. A preposterous example was using a big doll to give a castle gate a “wedgie” in order to open it. Even stranger was when only certain pigeons were attracted by a bowl of soup. Charlie can interact with the silent dolls to see information about the puzzle at hand. 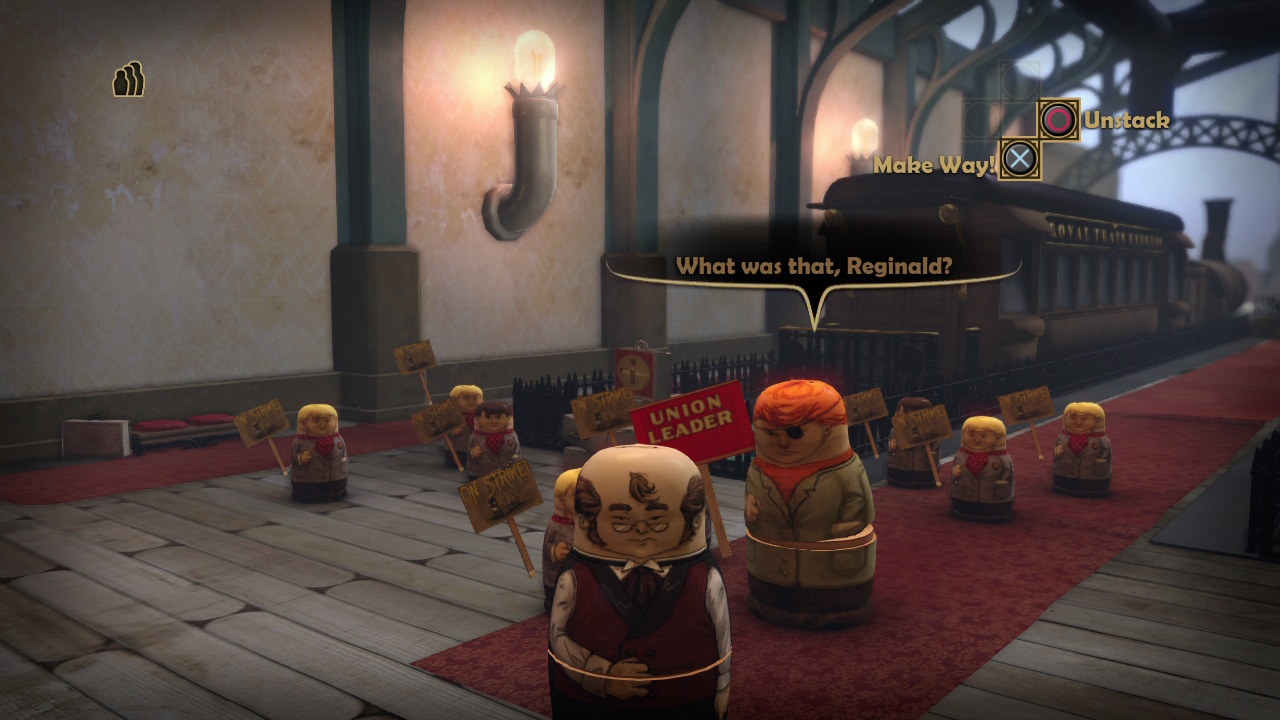 Talking to special dolls will give you information about ways to solve the problems. The far easier way is to use the progressively detailed hint system separated by a short timer. Reading exactly what the game wants you to do is not particularly fun. Reading is better than spending time finding the right doll using trial and error. Some doll types can be hard to distinguish between and you’ll need to remember their abilities based on this unique look. The important characters are usually fairly easy to spot possibly because they are highlighted in the story movies.

The bulk of the story is presented through silent movies played out on a fake stage with miniature props. They are ample for the story content but often not funny when they are clearly meant to be. It generally feels like they are trying a little too hard to be funny. Even finding a family of dolls and stacking them together will display another unfunny silent movie. These movies typically drag out a few more sentences than they should. Once you complete each of the main puzzle sections another silent movie comes up of near identical nature. Luckily almost all of these movies can be skipped after a few seconds of saving and loading. At least with the silent movies and silent dolls the game feels consistent from start to finish.

Although very consistent the game starts feeling much the same even though you are using different dolls. All you do is press the same action button on the critical object or bring a doll to an identical location. At the end the game places different dolls around you so all you do is pick the right ones, which feels lazy in contrast. Also near the end are solutions that combine abilities of different dolls. This combination didn’t really do much to improve the basic puzzle solving. It just means you bring two dolls to one location and action them together. Thankfully when you move dolls it takes them while to shuffle back into their original places. Some dolls that follow also get stuck on objects or walls. There were even a few cases where I would unstack from a larger doll and get stuck in a corner. 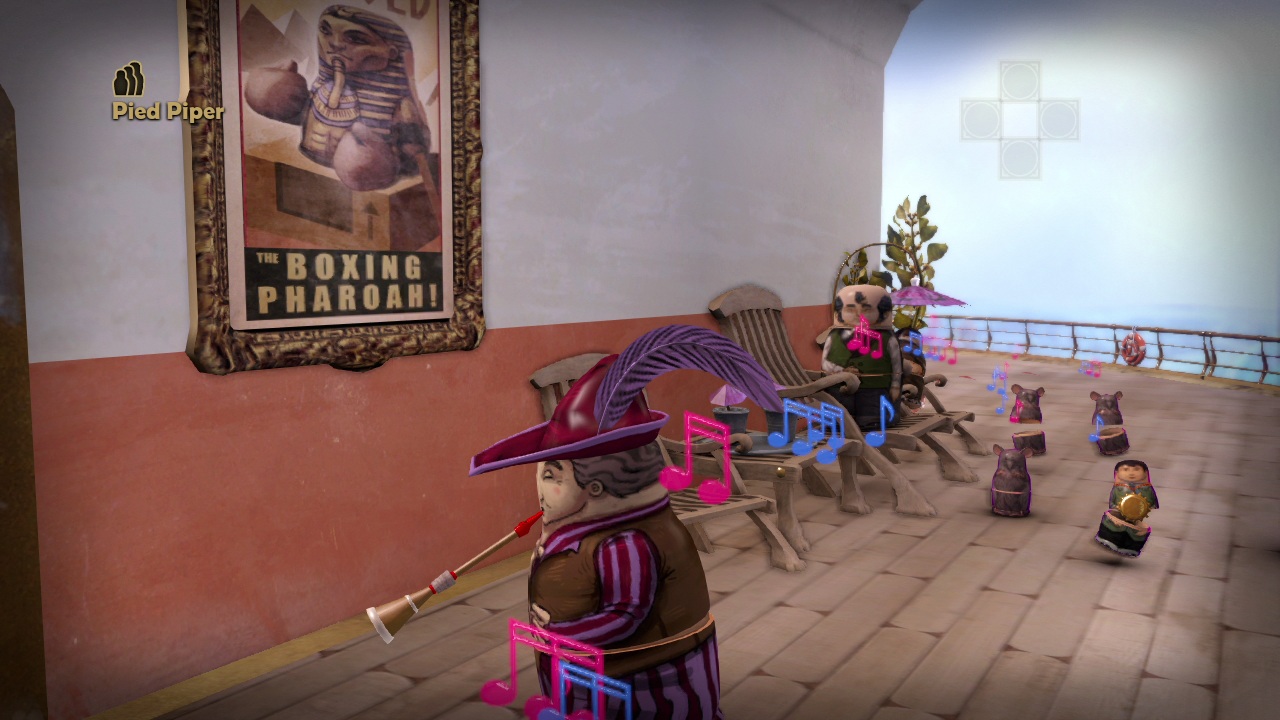 Minor issues aside Stacking is still a delightful, albeit simple, adventure game. Double Fine has done a great job to bring some originality to puzzle solving. However the game does begin to feel much the same when all you are really doing is finding a doll type and using its abilities. Clever puzzles do help dull this feeling of repetition but they don’t fully negate it. Certainly Stacking is a good little game that feels pretty fresh for a few hours and is worth checking out.

Our ratings for Stacking on PlayStation 3 out of 100 (Ratings FAQ)
Presentation
81
Graphically consistent and looks good for the most part. Silent movies are hit and miss when presenting the story.
Gameplay
83
Using different dolls to solve puzzles in slightly different ways feels pretty unique in the beginning. Starts to feel quite samey and some puzzles aren't very logical.
Single Player
74
Nothing particularly amazing about the story or some of the silent movies. Game length varies depending on how many puzzles you retry, average probably four hours.
Multiplayer
NR
None
Performance
81
Short load times and mostly good controls with fast stacking and unstacking. Dolls rarely get stuck behind objects or other dolls. Camera can make it hard to see in tight areas.
Overall
80
Stacking is a unique puzzle game with some interesting dolls and abilities. Alternative ways to solve simple puzzles is refreshing but starts to feel samey.