A brilliant follow up with perfect suspense, tense combat, immersive audio and simple improvements over the original.

Isaac Clarke finds himself on the Sprawl three years after the events of the first game. The Sprawl is a huge station built onto part of Titan, one of Saturn’s Moons. Things have recently gotten bad on the Sprawl thanks to a Necromorph outbreak. Clarke must deal with an infestation that is even more dangerous than before. Dead Space 2 is a refined third person action-horror game with brilliant pacing and great action. The sequel features a few new Necromorphs, some new weapons, better Zero-G and a fully voiced protagonist in Isaac. 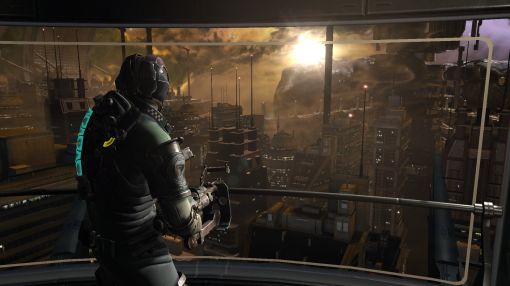 Welcome to the Sprawl

Those familiar with the original will be aware that Isaac was susceptible to visions from the man-made Marker. The Marker is the object responsible for the Necromorph outbreak. It causes insanity and reanimates corpses into grotesque killing machines. Isaac’s visions carry over to the sequel with many appearances of Isaac’s deceased girlfriend, Nicole. Several of these visions are headache inducing thanks to the lengthy grating audio and flashing lights. Isaac knows Nicole is not real and we see him confronting this anomaly in his head, just like he deals with Necromorphs, defiant until the end.
Isaac is voiced in the sequel and says just enough at the right times to make the interactions flow well. He will be talking to a few main characters but rarely says more than a few concise lines. He actually turns out to be rather likeable even cracking a few jokes when the mood arises to break up the building tension. The number of characters you interact with is kept pretty minimal. Most of the communication happens via video or audio link anyway. Stross, patient of the Sprawl just like Clarke, has come into contact with the Marker and his sanity is breaking down. Stross and a CEC employee, Ellie, make up the majority of interaction on the visually impressive Sprawl.
The Sprawl itself looks fantastic and the graphics have been improved slightly over the original. Better use of colors, a wide variety of Necromorph creatures and as usual first class sci-fi effects. The 3D HUD works just as well as before with even better looking communication videos. These videos are the most impressive when you can see the same characters in the distance. Perhaps the only consistent issue with presentation is the tendency for ragdolls to lose weight and get caught on Isaac as he moves. The audio matches the visual quality with carefully prepared sound effects. 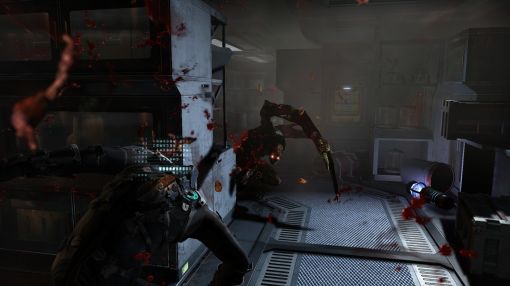 Sound is just another way Dead Space 2 brings you into the Sprawl without letting go. Main characters have some superb voice work with crystal clear audio. The ambient audio and effects are perhaps even better than the original. Walls might be whispering, “Isaac,” or objects may crash onto the metallic floors down a dark corridor. Then of course there are the loud sounds when a group of Necromorphs burst into a confined room you thought was safe. On the right difficulty you will be very cautious about every sound and any unusual activity. The suspense and action flows wonderfully with very little backtracking through areas.

All videos for Dead Space 2 (4)
Advertisement ▼