When I was a bit younger, there was an extended period of time when I got really into Spider-Man comics. Slowly but surely, I found myself becoming a huge fan of this particular super-hero, especially a few years later when his adventures were part of my regular TV viewing. Over time, however, I’m afraid my enjoyment of Spider-Man has dwindled somewhat, and unfortunately the newest game release featuring this hero, Shattered Dimensions, has given me little reason to renew my interest in the character. Not to jump the gun here, but I feel what enjoyment I did retain from this title was based more so on fond memories of when I was more of a die-hard Spider-Man fan, and I’m not sure it has quite the general appeal that a game like Batman: Arkham Asylum has. 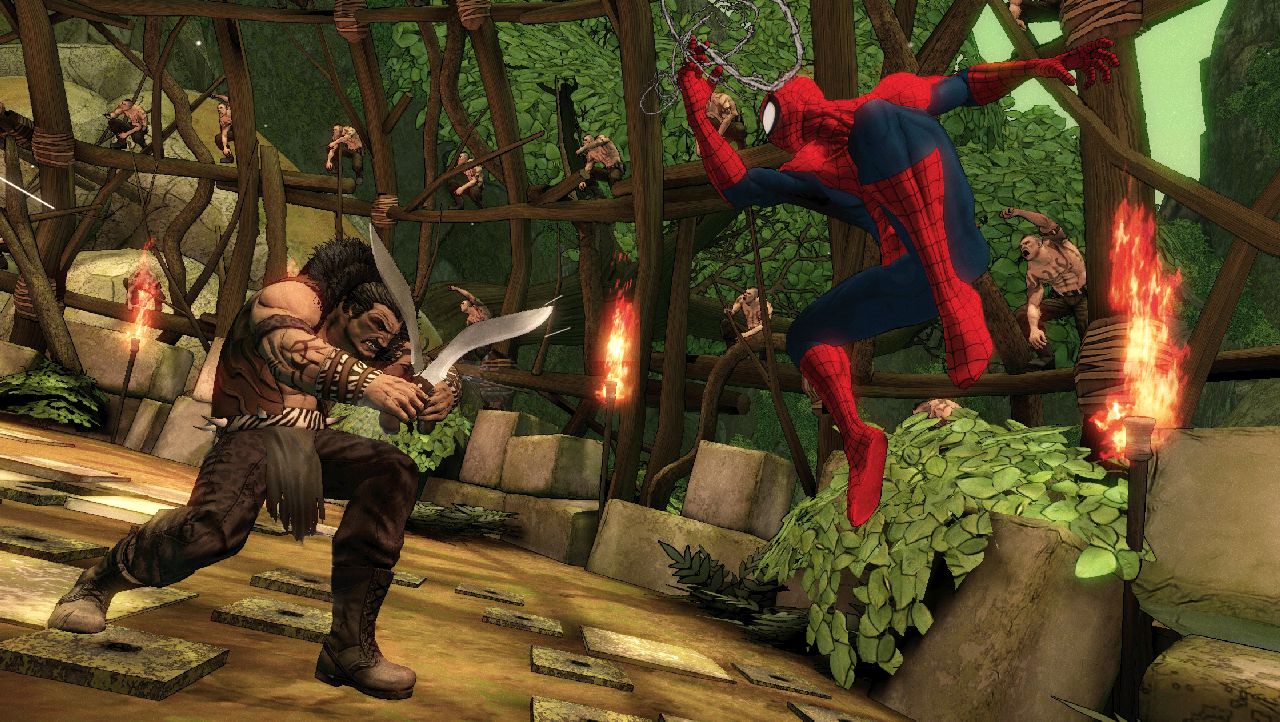 To start off on a more favorable note, though, one thing that does stand out for this game is the visual style. Overall the game takes on the appearance of a cel-shaded, “Saturday morning cartoon" look, especially where the “Amazing" and “Ultimate" dimensions are concerned. The other two dimensions retain this look for the most part, but also have a little bit more individual distinction. The “2099“ dimension, for instance, hosts a sort of futuristic, cyber-tech look, filled with massively tall buildings and flying cars, whereas the grittier, 1930s era “Noir” dimension, uses a combination of black and white and muted sepia tones.

The sound design is solid in some areas, but a bit grating in others. To start with, the music is okay, though not really terribly memorable, outside of maybe the more commonly heard themes like the main menu and your upgrades/challenges menu. Sound effects are also pretty good, but again nothing that really stands out any more than other current-gen titles. Where the sound design fails horribly are the voice-overs, the main problem being that no one ever, ever, shuts-up. It’s far too repetitive, and while at first I found Spider-Man’s quips fairly clever and amusing, by the end of the game I really could hardly stand it.

Moving on to other aspects of the game, the story is extremely mediocre and very much “written for a videogame”, in every possible negative way you could think of. The basic setup is that Mysterio one night tries to steal a mystical tablet from a local museum, but Spider-Man gets the drop on him, and in the middle of their fight accidentally manages to break the tablet. Madame Web then promptly shows up to let Spider-Man know that now the pieces of the tablet have been spread out across four distinct dimensions and its up to each Spider-Man to work together in order to reassemble the pieces of the tablet.

Unfortunately, (but not surprisingly), each of the tablet pieces have fallen into the hands of various super-villains, which means that levels are all themed around both individual dimensions as well as a different super-villain for each level. This means that each level is at heart a glorified boss battle, and is in that regard somewhat similar to the MegaMan series. Levels are also unfortunately very linear in nature, not giving the player much opportunity for exploration through web-slinging and other similar Spider-Man specific abilities. 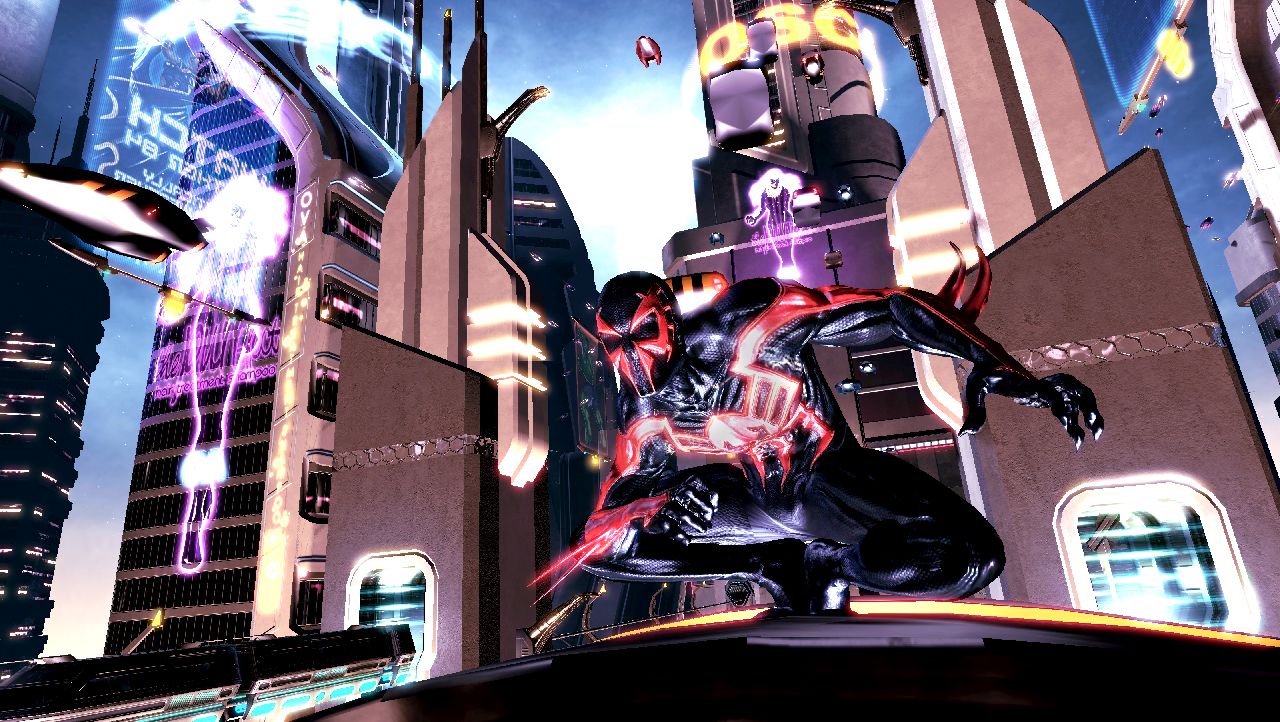 However, at the end of the day, the majority of the gameplay boils down to combat, and unfortunately, while the combat can be fairly fast-paced and entertaining, it is overall a bit of a mess. To be fair, there is a hefty amount of moves ultimately available to upgrade your combat skills with, but there’s no real gradual learning process that the game uses to help you memorize the different moves, so that it ends up largely being an exercise in random button-mashing. It also doesn’t help matters that targeting individual enemies or objects (to be used to throw at enemies), can be an extreme exercise in patience, as the camera almost moves too quickly and makes it very difficult to target exactly what you want.

The camera overall tends to me a bit of a pain, especially when you’re actually wall-crawling, since all it wants to do in that case is stare at Spider-Man, making it extremely difficult to look at the environment. The game also has this strange fascination with first-person perspective. A huge majority of the cut-scenes are showcased in first-person perspective, and there are various parts of the game that requires you to beat up on a boss from that perspective, utilizing the control sticks for your punches and for quick-time events in order to dodge a counter move by the boss you’re beating up on. It doesn’t exactly ruin the game and it can be fairly satisfying, but there’s no real need for it to have been incorporated at all.

The game has other bugs and issues as well, which was most especially demonstrated to me when I was playing the Juggernaut level. During the initial fight at the beginning of the level, Juggernaut got stuck behind a truck while in the middle of his charge attack. I waited for a while, hoping he’d eventually get loose and continue to charge more directly at me, but ultimately I had to just walk up to him in order to get caught by his attack and die so that the game would reload the last checkpoint. Common enemies also sometimes will want to sort of occupy the same exact spot as their companions, which causes bizarre fluctuations of sorts with the character models. 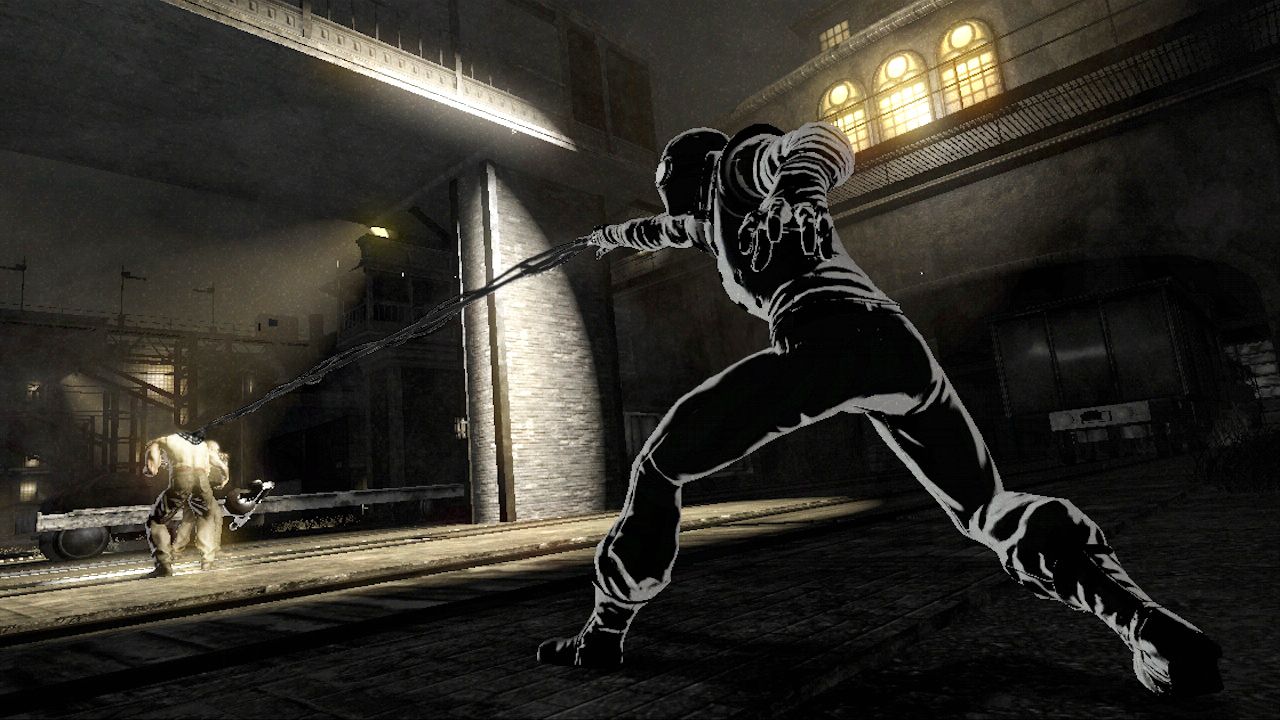 I did overall enjoy the actual encounters with the bosses, which all felt for the most part pretty distinctive from one another and were exciting and engaging enough to hold my interest and provide a real challenge. I was also fond of the game’s “Web of Destiny” mechanic, a series of challenges specific to each level, which unlocks additional moves and character upgrades. Completing these “Web of Destiny" challenges also earns you extra “spider essence”, the points used to purchase newly unlocked abilities and other extras. I also liked that these challenges could be “tracked” in a similar vein to the way you might track current quests you want to focus on in games likes like World of Warcraft. All in all these challenges are a pretty good implementation to encourage the replay value, and also worked fairly well as far as distracting me from rushing through the levels.

This is ultimately, however, a game I can only really recommend to more die-hard Spider-man or superhero/comic-book fans. Even then, however, I’m not sure that the game really goes far enough to make you “feel like Spider-Man”, that is, there’s just not a lot of immersion to be found. It’s not at all a terrible or completely broken game, but it is unfortunately heavily marred by issues in some of the key areas of gameplay and performance. There are a few memorable moments to be had, If you are still interested in the title, but I would recommend waiting until the price drops a little more before picking it up.

Our ratings for Spider-Man: Shattered Dimensions on Xbox 360 out of 100 (Ratings FAQ)
Presentation
80
Very nice style and a unique look that gives the game overall a very "comic-book" feel. Sound design is overall okay, but the voice-overs are horribly annoying and repetitive.
Gameplay
73
Levels are very linear for the most part, and are too similar to each other. Combat is fairly entertaining, but kind of a mess, unfortunately.
Single Player
72
Every level, despite the hook of the four different "dimensions", ultimately boils down to the same basic format of an extended boss fight mixed with lesser enemy brawls.
Multiplayer
NR
None
Performance
75
The game runs okay for the most part, though there are occasional bugs that can mar the experience. The camera has issues and it's sometimes impossible to target exactly what you want.
Overall
72
A somewhat mediocre and sometimes frustrating experience, which is only recommended to fans of either Spider-Man, or comic-book/superhero games in general. 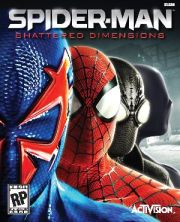