An interesting mix of side-scrolling, loot hunting, multiplayer action, Castlevania: Harmony of Despair is a different twist from traditional Castlevania games. Over the years, the Castlevania franchise has made a shift from exploring to loot hunting. For better or for worse, Harmony of Despair is completely about the loot, while the exploring aspect is limited to only six levels (with the option of purchasing a seventh) in the whole game. Konami has once again picked up the Castlevania title to try molding something new out of old clay, this time reusing parts and pieces from older Castlevania titles to create a collage of nostalgic Castlevania experiences. Konami has opted to do away with any story for this title, as the whole purpose of the game is to jump into a level with your friends, or others online, and go find some new gear to wear. 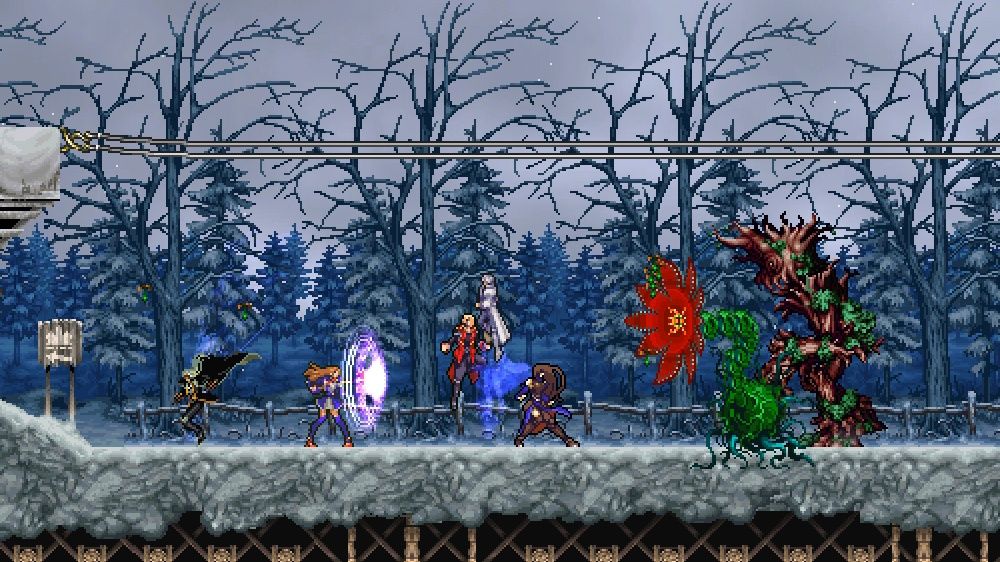 After the title screen, you’re able to choose to play through a level alone, or with others online. This game was made for multiplayer and you’ll more than likely never play the single-player mode (other than to practice before joining a party). Making it through levels is much easier when done with another 5 players helping you out. When loot is involved, most online games make it hard to like your party members since usually only one member of your party can collect a certain dropped item. One cool effect in Harmony of Despair is that if one person opens a treasure chest, all players get an item from it. This lends the tone to a lighthearted, easy-going atmosphere that is an enjoyable game to play online in a party.

Currently you can play as Alucard, Soma Cruz, Jonathan Morris, Shanoa and Charlotte Aulin; however, you can also purchase (with Microsoft Points) additional characters, Maria Renard and Richter Belmont, to play as. Each character has strengths and weaknesses—for example, Alucard is able to equip shields to add extra defense, whereas Shanoa has powerful spells to deal extra damage. Each character has their own unique set of abilities; some have subweapons while others use spells and signature moves. Playing as a certain character does affect the role you perform, which engenders a personalized experience to each player in the party, while having a feeling of unique contribution. These two aspects make the game fun. Each character can only equip certain weapons and armor adding to the change of gameplay when playing with a certain character. Characters also level up individually, so you might be sticking to one character for the first run through the levels. This adds to the replay value as you will want to try multiple characters before you are done. 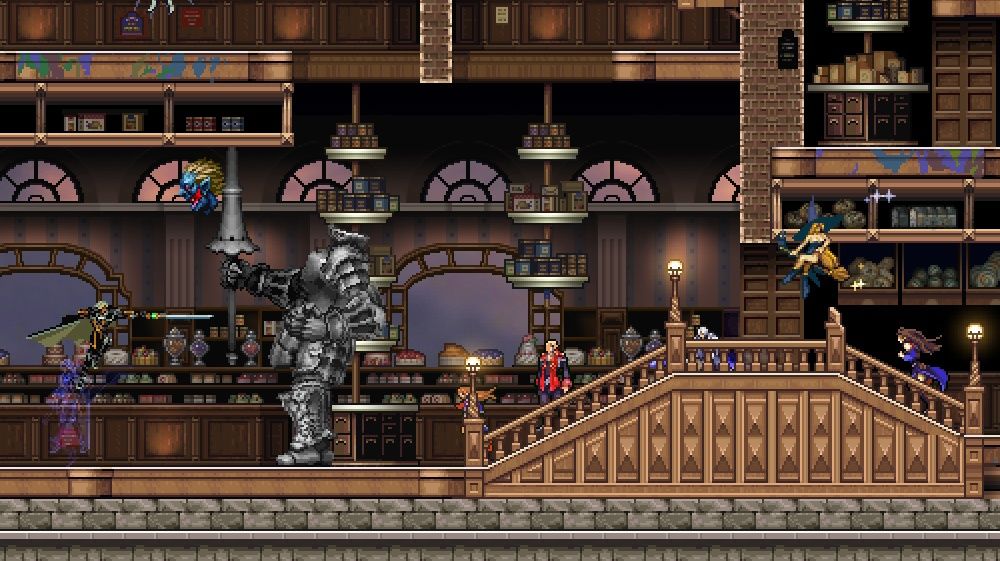 Although the list of enemies in Harmony of Despair are taken straight from previous Castlevania Games, the enemies are some of the more memorable ones and difficult to out maneuver. Most enemies take more than just spamming your attacks. Some enemies only take damage at certain times, or deal massive damage so you must come at them carefully and with the support of the party. Other enemies, though their attack damage is small enough, will turn you to stone or curse you, taking away all of your magic points. Most stages have such a variety of enemies that you’ll require assistance from other players.

At the end of each stage is a boss. The bosses in Harmony of Despair have a great deal of health and deal a great amount of damage. Keeping true to the Castlevania games, boss battles take a great deal of skill (knowing your subweapons/spells/abilities and keeping them leveled up) to take down, and this is where the multiplayer party comes in handy. Although getting through a level might be feasible in single-player, the boss battles are almost impossible when fighting alone. With a party of six, bosses are still very challenging, but doable. 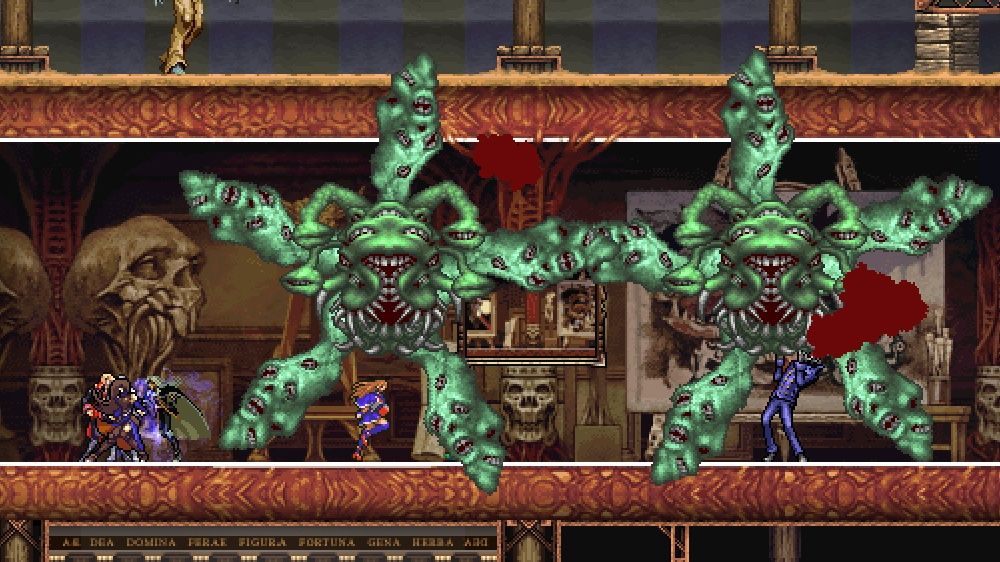 Although the level designs and enemies are well animated and imaginative, for the most part, they are just ripped sprites from previous Castlevania games. The sounds connected to the different enemies are somewhat different, so you’ll hear a myriad of new screeches and yells as the enemies take and give damage. The voice acting for the main characters that you can play are not the same as from their perspective titles, and they are somewhat horribly done, but there is an option to change the voice acting for all characters, both heroes and enemies alike, to speak in Japanese by holding down the right trigger button when selecting your character. For most, the Japanese voices will be preferable.

Harmony of Despair plays very similar to most post-Symphony of the Night Castlevanias—a side-stroller that’s fun to play and explore. Unfortunately, the amount of exploring you’re able to do is somewhat limited in Harmony of Despair since there are only six levels to play unless you buy the seventh level. The Castlevania franchise took a step into a new direction with supporting an online multiplayer mode, and for the most part, it works well, but the thrill of deep exploration on one’s own time seems to have been sacrificed to make it work. Perhaps not the best Castlevania to start the series with, but one that fans should pick up if word of this game got past them.

Our ratings for Castlevania: Harmony of Despair on Xbox 360 out of 100 (Ratings FAQ)
Presentation
68
Although gamers new to the franchise may find level and enemies well animated and detailed, those familiar with previous Castlevanias will notice a gross amount of reused art and sprites.
Gameplay
77
While most enemies require strategy to defeat, some enemies are quite stagnant in variation of abilities. Boss fights are quite enjoyable, especially when fighting in a party, but a short list of levels to revisit makes the replay value a bit lacking.
Single Player
50
Single player exists but you'll most likely never use this mode. The amount of loot you can acquire, and ground you can cover, is increased greatly if you party up with others online.
Multiplayer
81
Multiplayer modes don't often come to Castlevania games, but Konami based Harmony of Despair around a six player party mode. The fact that all players receive an item if one player opens a treasure chest makes the game more enjoyable for everyone.
Performance
86
The game runs well with no framerate issues at all; although, loading a level does take a while. The controls work well and can even be customized.
Overall
73
Castlevania: Harmony of Despair is well priced and packed with memorable characters from previous games that should provide a great deal of entertainment for the fans of the series. 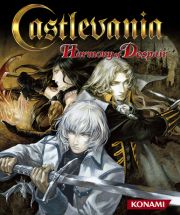