A sequel to a game that didn't need one

Lucas Arts has thrown together another title in their ever expanding Star Wars franchise. The sequel to The Force Unleashed has been in production for only a short while. It was promised to build on the experience of the original. While other studios of Lucas Arts are, doubtlessly, working on the new Knights of the Old Republic MMO, the team behind the first Unleashed game, The Force Unleashed Project (creative title, I know) has been cobbling together this sequel. The Force Unleashed II is an action adventure title set in the Star Wars universe between episodes III and IV. This dark spot in the Star Wars cannon details the trials of Darth Vader's evil Sith apprentice, who means to use his wicked control of the force to obliterate the rebel alliance. If you aren't familiar with the Star Wars Universe, well, this game won't really teach you much about it. Star Wars will seem like a chaotic mix of malign or malicious space people, some magic power called the force, and loads of futuristic machinery. Oh, and monsters. You'll probably think that it seem like a lot of other crazy video games except your character has these two glowing sticks of light that he's killing people with. Okay, now really, who doesn't know Star Wars? If you are familiar with Vader and Fett, and if you can pick out a blockade runner from a star destroyer, then get ready to stuff your face with some serious fan fiction. Whether or not the game does justice to the old Star Wars universe really is up to you.

You play as StarKiller, Vader's apprentice from the first game. You're actually a clone. You're actually a clone, who has inherited the memories, motives, dreams, and sex drive of his original, StarKiller from the first game. This whole backstory is given to you by Vader himself. He explains the faults of the cloning process, your residual memories, and what your purpose is. He's surprisingly chatty for a Lord of the Sith. Your character motivation is pretty flimsy; StarKiller is cradling a love for a cute rebel girl named Juno, whom his predecessor actually wooed in the first game, and she is telling him through mental force telepathy to escape from Vader and join the rebels. So he's going after a woman he's never actually met and leaving to fight in a cause he doesn't really understand. But fight he does! And fight a lot, which is the cool part. You're force powers are off the charts, so the more fodder Vader can throw at you the better.

The combat is intense, it's bombastic, it's off the charts epic, especially for Star Wars. You'll be able to play through some cinematic moments, moments that abuse the concept of Force powers. Like the Green Lantern's ring, the Force will provide you with a shield, a cannon, and wings; for all those larger than life scenes. There are loads of QTE's (quick time events, where you have to press the corresponding button on the screen to go through a cinematic sequence) which are beautifully rendered, for taking down the big droids and the even bigger bosses. They're wicked easy to pull off; this is not the brutal difficulty that God of War is known for. When you're on the ground, fighting through the levels, you'll have a wide range of Force powers to use. You are god, storm troopers are your playthings. Force grip is your magical hand picking up and tossing the little toys all over the place. Grip is definitely the funniest power; go storm trooper bowling with a computer terminal, toss them off the ledge and watch them fall. Pick a tie fighter from the skies and bring him down on a whole mess of stormies. Grip is a little overpowered, but so is everything in this game, so it's hardly a stretch when you can yank down about a ton of moving metal tie fighter. This is a far cry from Yoda lifting Luke's x-wing out of the swamp. 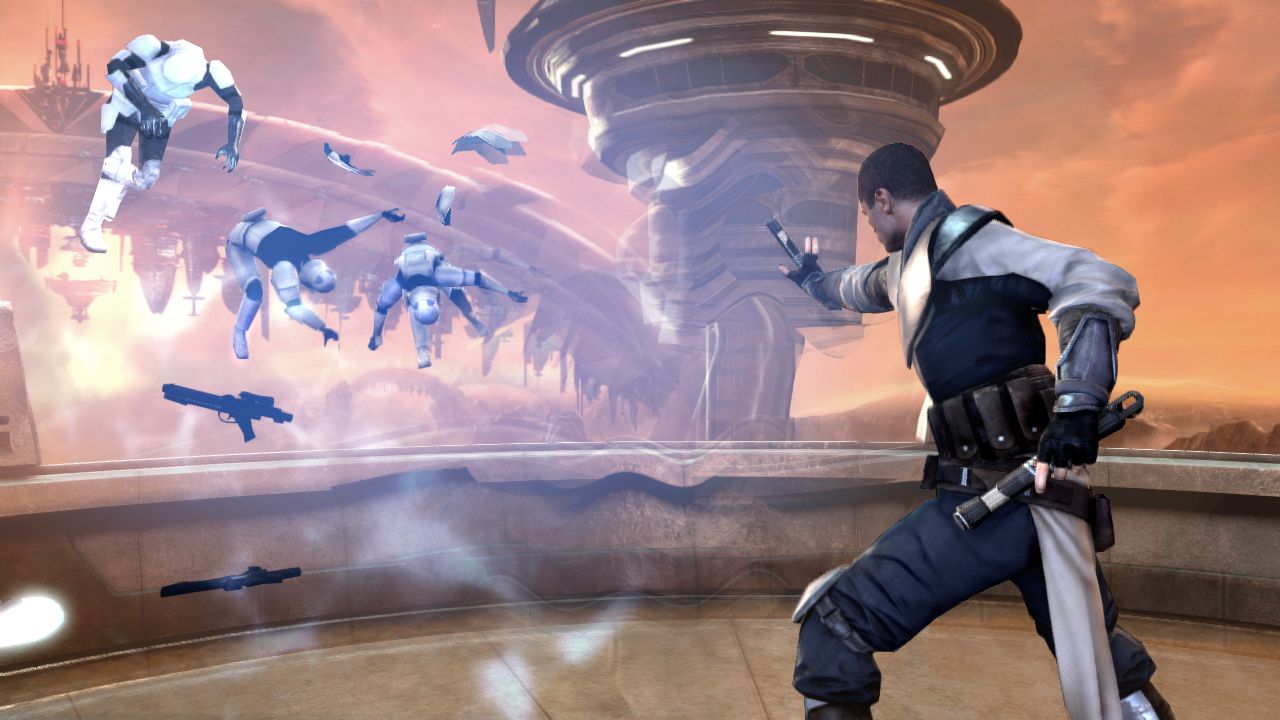 You'll have a couple combo buttons to toy around with. The saber is the standard hack n' slash weapon, just press repeatedly. Force Push is a knockback attack that can be charged for some extra punch. Force Lightning is the ranged attack, which can be chained with saber combos to wreak some serious area damage. At higher levels this power'll clear a room. Hey Gamers! You remember when you got that Sith Lord up to Level Twenty in KOTOR and you proudly strut into a room and, BLAM, electrocute all those puny weaklings! Yeah, you can do that in the first level of Force Unleashed, no grinding necessary. There's also a dash move that can be tossed into the combo mix and get you out of some dicey situations. Overall the fighting is seamless; there'll be times when your attacks will take over and do the work for you, so the controls aren't tight per say, but they're responsive. There's a grapple move that will take down the guard of any enemy and give you a free shot at killing them, no resistance even from the force-savvy enemies. Combat is fun, very fun, for a while.

The levels are varied enough so that you'll usually have new ways to kill, but it'll get tiresome. I hate to be absolute, but unless you're looking for a mindless romp, this will absolutely get boring. The QTE's will repeat enough times that you won't even think about taking down the fourth or fifth AT-ST. You'll exhaust all of the combos endlessly, and the plot is not exactly gripping enough to follow. The story starts to feel empty and motiveless, especially about half way through when you return to the Kamino cloning facility (where you were born) and fly a spaceship into the Imperial Base. You're like “Wow that was cool”, and then you'll ask, “Why did I do that again?” Or if you're like me, "is this what Yoda would do?" Well, violence is always the answer in the Force Unleashed II.

The level design is tight, or at least tighter than the first game. The original Force Unleashed had some major flaws in its levels especially on the trash planet. The design was so transparent that I could easily tell how each and every platform was placed in the coding, not that this is always bad in a game, but for such a cinematic adventure it'll take you right out of the fantasy. And plus it was difficult to navigate, I often found myself trying to force mountains of trash to the ground in order to clear a path. But the level design has improved. The level design was linear in the first game and it's equally so now. The path you take has no more depth, but at least it's more obvious. The levels are more coherent, there are fewer invisible walls and nowhere corridors. There are a few Holocrons lying around, which are collectable upgrades to give you more force power or health. They're not very difficult to find. There are some puzzles here, for all of your force powers though they're pretty weak. The force powers are mostly for killing, so grip is really the only one that could even potentially be used to puzzle. But mostly, the puzzles are 'take thing - put in socket' with the force. 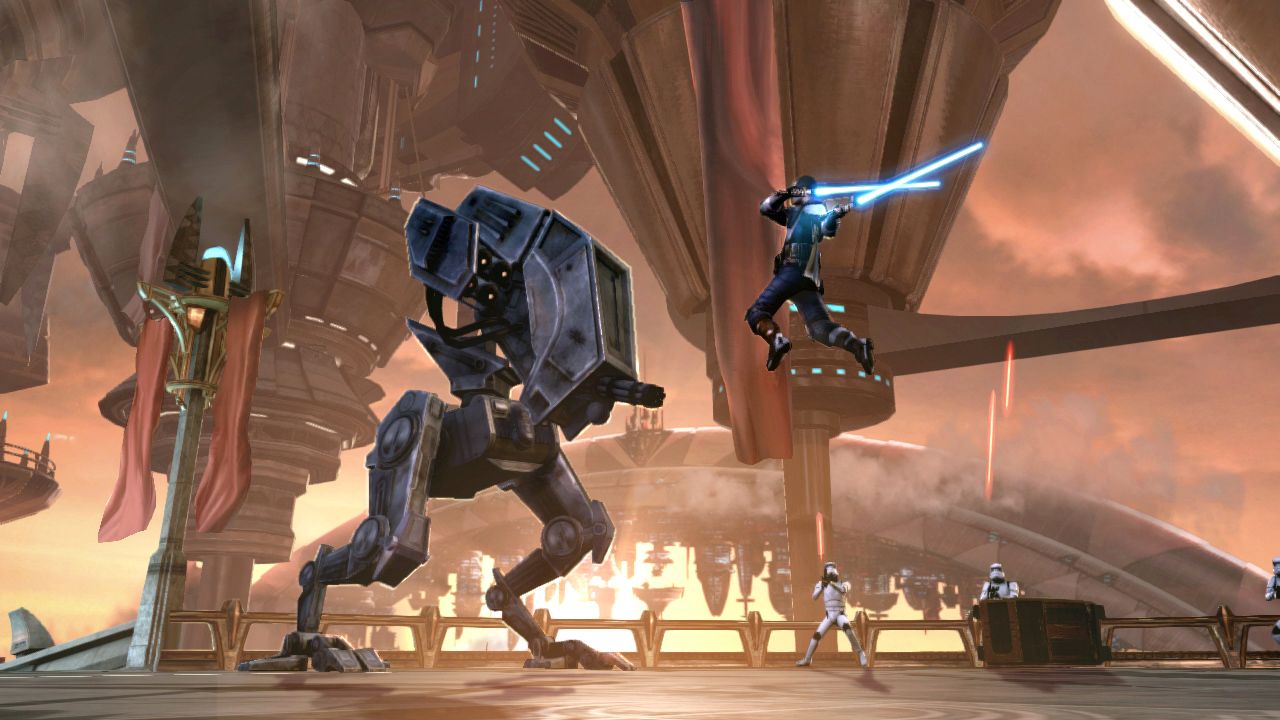 Fitting with the epicness of the game, boss battles are huge. These monsters make the rancor look like a puppy, and actually one of them crushes a rancor with the palm of his hand. This guy's got some big hands and a big mouth. In a recreation of the Geonosian arena from episode II a Julius Ceaser bastard gives you the thumbs down and the Gorog is summoned to crush your face, the battle progresses into a fight up to the cables supporting the arena, and then into a free fall battle through the atmosphere, Gandalf style. I kid you not, there's not enough force in the universe to let this guy actually fucking fly, but he does it anyway. Actually fighting the big guy, spectacle aside, is really simple and easy. The Gorog is hardly Hades or Poseidon. Unless you're playing on Hard, he won't touch you. Other bosses employ minions to keep you distracted while you're hacking away at their health. The cinematic are fun, but the fighting isn't. The fighting feels like killing time for the next fall that takes you through atmosphere re-entry.

Star Wars: The Force Unleashed II looks and feels like a sequel. It's not the kind of good sequel video games are known for, it's a B movie sequel like Speed 2: Cruise Control or Jaws: The Revenge. It's a sequel to a game that tied itself up perfectly, a game that neatly slipped into the universe, discretely and with a wink. The Force Unleashed is a game that needed no sequel, but whose franchise demanded it. The combat has been improved, but not by much. All of your force moves are fun, they're exciting and funny sometimes, but they'll grow tiresome and you'll quickly run out of combos to combo. The combat is fluid, but it's not tight. It's a sad thing to see a once respectable fictional universe reduced to this, all of the mystic charm is gone in a montage of violence.

Our ratings for Star Wars: The Force Unleashed II on Xbox 360 out of 100 (Ratings FAQ)
Presentation
70
Some of the set pieces are epic and cinematically over the top. The lightsabers glow nicely and Yoda sounds like Yoda, it's a solid rendering of the Star Wars Universe.
Gameplay
62
The fighting is fun and varied, but it's mindless. You're totally overpowered and everyone bows in your wake. The puzzling is very weak, the level design is linear and nothing-special.
Single Player
50
The story is short and aimless. It is a rip-off, especially considering the concise beauty of the first game. The game is entirely linear and there's little replay value.
Multiplayer
NR
None
Performance
80
It runs fine, load times are a little too long.
Overall
55
Star Wars: The Force Unleashed II is a sequel to a game that didn't need one. It sports minor improvements on combat, some new enemies, and a shallow story. This is a game meant for modern teens unfamiliar with the roots of the franchise. 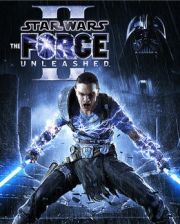