It’s no secret that Capcom has been moving towards co-op games with their recent offerings, and Lost Planet 2 seems to have the most emphasis on co-op play of their releases so far. The campaign of the original Lost Planet could only be played in single player, and it was a lot of fun that way, although the game did have its problems. Since the release of the original game, Resident Evil 5 and to a lesser degree Dead Rising 2 have encouraged you to play the game with a friend. Lost Planet 2 takes this idea to a whole new level, and designs the entire campaign around four-player co-op. Really, single player isn’t even an option; the atrocious friendly AI and mission design make this all too clear. It is possible to play through the game solo with as many as three AI companions, but this will serve only to make some of the missions nearly impossible on all but the easiest difficulty setting. 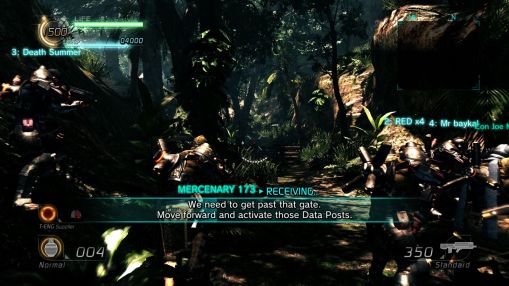 The Icy Environments of Lost Planet 1 have been utterly transformed
Some missions, for instance, will have you and your team capture a number of different control points across the map and then defend them for a couple of minutes. If you are playing with friends these missions are fairly straightforward; you simply divide your team to defend the multiple points. If you are playing by yourself, however, the dumb as bricks AI will simply follow you around leaving the other points undefended so that enemy soldiers can come in and take them, stopping the clock and causing you to return and capture the point. When you go to re-capture this point, enemy soldiers will go and capture the other point, meaning you have to run around the map trying to defend all of the points at once, which you will find to be impossible on all but the easiest difficulty setting. Other missions are at least playable in singleplayer, but your AI companions are likely to run off randomly and get themselves killed repeatedly. They will often stand around doing nothing, and will never attempt to enter and pilot any kind of vehicle. 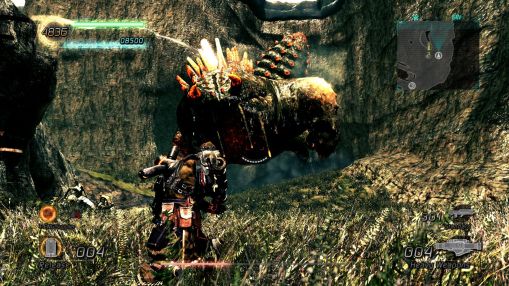 Say hello to a Cat-G Akrid. They generally aren't very friendly
Once you do recruit some friends to play with you, gameplay improves dramatically. Sadly, doing this isn’t as easy as it should be. You can only join another player’s game if you have advanced as far as they have in the campaign. There is also no way of joining a game in progress. If you want to play through the entire campaign in co-op, the best way to do this is to find three friends and play through the entire game with them. It is worth it to do so however, since the entire game is designed around co-op, from the mission design to the secondary weapon each player gets that shoots thermal energy. Missions are also chopped up into bits; they are divided into episodes, sub divided into chapters, and then divided into missions. Each mission will take from 5-15 minutes to complete, and there are usually 2 or 3 in each chapter. There are generally four or five chapters in an episode, and there are 6 episodes in total. This is also an arcade game through and through, you are timed and graded on your performance on each level, and each mission begins with the words “Ready, Set, GO!” flashing on your screen.
1234Next

All videos for Lost Planet 2 (2)
Advertisement ▼