Lucas Arts has recently re-released their smash hit PC title, Monkey Island 2 onto the modern consoles. Monkey Island is a game series that originated in the early 90s. It's a classic point and click adventure with all the witty dialogue and weird characters it takes to fill up a world called Monkey Island. You are directing the series' front man, Guybrush Threepwood, who had slain the Ghost Pirate LeChuck in the first game. Well, he didn't really slay him, he sprayed him with Root Beer and now he can't shut up about it, which is bad news cause old LeChuck is back for some revenge. Guybrush is infamously the world's worst pirate, he can't sword fight, he's gotten mugged by midgets, and he doesn't know a single drinking song. But, that's what makes it a hoot to get him into all sorts of Piratey trouble.

Monkey Island was originally written by Dan Grossman and Tim Schafer, two of the old masterminds at LucasArts. Tim Schafer is a dynamite writer; his recent smash hit metal epic Brutal Legend is proof enough that he's got the chops to make you split your sides. Dan Grossman has been famous for the Pajama Panda games and a slew of creative children's books. So when those two young fresh minds put their heads together they produced Monkey Island, a cutesy, tongue and cheek pirate adventure. The cast of characters is wide and weird, making the game all the more like living a children's book. 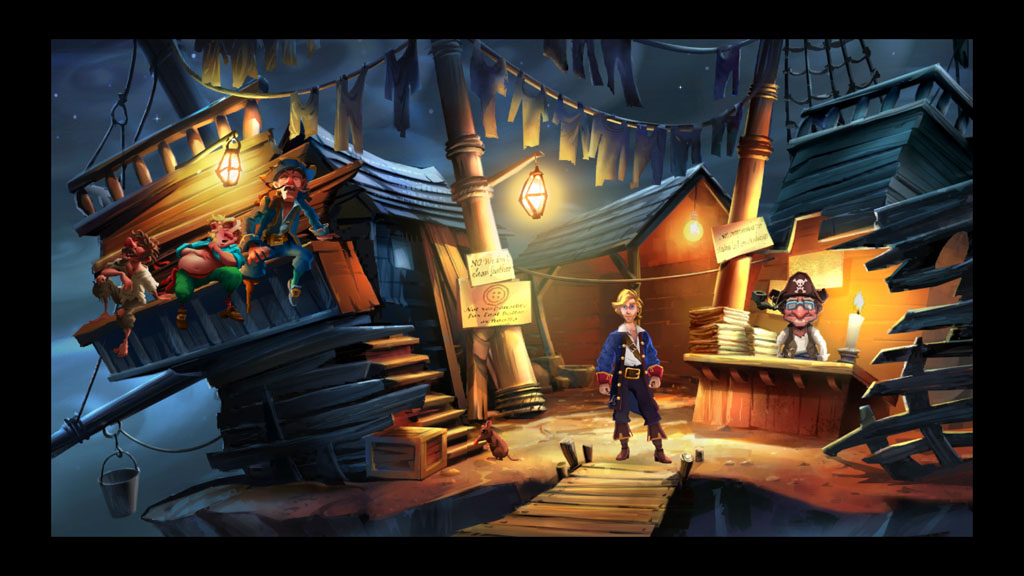 Monkey Island's re-release has introduced the children of the millennium to the last generation's idea of original story telling, point and click adventures, the kind that make you use your noggin instead of your trigger finger. The term "graphics adventure" feels a little dated and a little PC, but Monkey Island 2 is a graphics adventure to the core. It has the usual slow pace, item gathering, and map exploring that make up old school graphics adventures. The re-release of the Monkey Island games allow you to switch back and forth between old school 8 bit and modern crisp graphics. The old school graphics gives that genuine PC feeling, but the new ones have voice actors and look prettier.

Guybrush begins his adventure sitting around a campfire relating the tale of the last game to two lazy looking pirates. Bart and Fink are hardly the kinds of pirates to believe a tall from some blond haired nancy-boy, but they have nothing better to do, so they listen and snicker. Guybrush is a bit of blowhard, so expect to hear the story again and again. He informs Bart and Fink that he's searching for the legendary treasure of Big Whoop, they tell him that they'll be waiting here when he gets back. And so begins the tiny epic of Monkey Island. This game'll take you across the sea to four different islands as Guybrush tries to piece together the map to Big Whoop. He's going to encounter all sorts of characters like Bart and Fink, some of significantly less "moral fiber," let's say. The game is divided up into four acts, each one expanding the monkey universe a little bit. 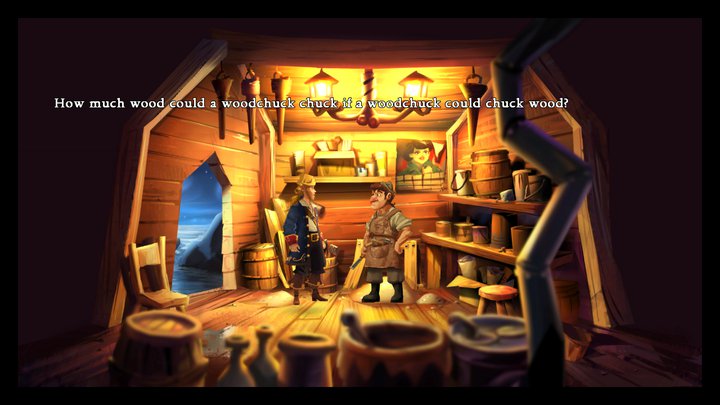 Monkey Island primarily consists of quests and problem solving. With an array of items like bananas and organ grinders and monkeys and whatever, you'll have to solve problems like how to get a costume for the ball or how to cheat your way through a drinking contest or how to create a voodoo doll. The puzzles are really creative, but their eccentricity makes them really difficult to figure out a lot of the time. Even if you're not a college student or game playing physicist, you'll hit a lot of brick walls with the puzzles. Some are straight up counter-intuitive and as the game progresses your inventory will look like a messy lost and found trunk, for monkey pirates. Thankfully, in the Special Edition re-release they include a super easy hint system where all you need to do is hold down a button and the answer to the next puzzle is given to you. It kind of ruins the experience to do this all the time, but if you're bashing your head against the wall because you can't figure out what to do with the Cheese Doodles, don't worry, hit the easy button.

Over time the graphics adventure style of games has a tendency to feel a little gimmicky. It seems like we're passed the era of graphics adventures and they're not coming back. A graphics adventure is really a very simple way to lay out a game, now there's no doubt that no one lays it out better than LucasArts, but there isn't much to it except a lot of clever puzzles and cute storytelling. I found it immensely satisfying and definitely funny, however I don't think I'll be replaying for a long while, it's like, once you get the joke it's not as funny. Monkey Island is a really interesting experience, if you've never played or even heard of a "graphics adventure" then I suggest checking it out because it's a gaming experience unlike any modern game. However it requires patience and a lot of thinking, it also doesn't hurt to have a childish sense of humor.

Our ratings for Monkey Island 2 Special Edition on Xbox 360 out of 100 (Ratings FAQ)
Presentation
90
This is the best a graphics adventure has ever looked, the revamped graphics are impressive and the game lets you go back to 8-bit for retro charm. The voice acting for Guybrush is spot-on funny.
Gameplay
55
The puzzles are fun, challenging, and imaginative. The gameplay will keep you guessing. But, graphics adventures are really simple and there is little replay value in such a linear game.
Single Player
71
The well written script and creative art style make the game really compelling. The voice acting is great and the story is always moving. The whole cast of characters is immensely funny and you're sure to develop favorites. However it's fairly short.
Multiplayer
NR
None
Performance
90
It runs fine, the transitions between retro and modern is seamless with the touch of the Back button.

Overall
75
There are huge upsides to this game, however it brings the overall genre annoyances with it. Monkey Island 2 Special Edition has a lot of retro charm and clever writing, but if that doesn't appeal to you, then it's not worth your money. 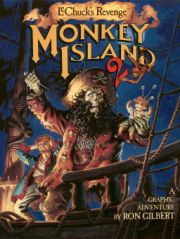