A new breed of MMO gaming

For me, the original Guild Wars (Guild Wars: Prophecies) was a solid and relatively action-packed RPG that was a blast to play through with friends but never gave me enough of the long-lasting MMO feel to keep me around once I hit level 20. I loved that Arenanet was looking to bring the MMO experience to gamers who didn’t feel comfortable with the standard $15 monthly fee, and for that alone, I always supported the game. Despite my previous experience with the game, nothing had prepared me at what I saw NCSoft’s Guild Wars 2 booth at PAX earlier this month.
Leading up to PAX, I had seen very little about Guild Wars 2. The Necromancer announcement trailer looked amazing and dragged me onto the site for a bit to check out the other previously announced classes. Everything looked great, but I still felt as if this game was one that wasn’t on many people’s radars, and I wasn’t quite sure how successful I could expect it to be upon launch. 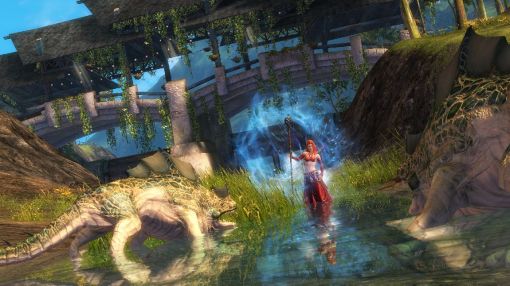 Upon my arrival at the Guild Wars 2 booth at PAX, I felt fairly confident that I was a bit of an odd man out. The booth comprised of approximately 16 different stations playing the game and every single one was packed, as well as all the entirety of the ground floor in and around the booth, with tons of rabid gamers looking for a brief chance to play the game or even just watch it being played. Gamers stood and waited in line for hours in order to play the game. The rather epic line rivaled some of the expo’s other big titles like Halo Reach. It seems Guild Wars 2 is much more highly anticipated than I gave it credit for.
Let it be known now, if you didn’t already know, that Guild Wars 2 looks amazing, not only in terms of pure graphical prowess but also in terms of animation and art style. Glancing from screen to screen inside the booth, I was treated to a wide array of interesting and awesome bits of action. Guild Wars 2 as graphically powerful and impressive now as Guild Wars 1 was at the time of its launch in 2005. On one screen, a Charr Elementalist cast a spell that brought a huge swirling tornado into existence that was then directly controlled by the player. Being presented in an extremely exciting and cinematic manner, this was just one example of the new aspects in Guild Wars 2 that felt way outside of standard MMO combat.
12Next

Our Review of Guild Wars 2
86%
Great
The Verdict:
"A title that breaks conventions and streamlines your experience to maximize the fun. But it is still an MMO."
Game Ranking
Guild Wars 2 is ranked #96 out of 1795 total reviewed games. It is ranked #12 out of 145 games reviewed in 2012.
95. StarCraft 2: Wings of Liberty
PC
96. Guild Wars 2

All videos for Guild Wars 2 (9)
Advertisement ▼