There were a lot of things that I liked about the first Tom Clancy’s HAWX game, and all together I feel that this series is certainly a worthy adversary to Namco’s longer-running “Ace Combat” series, and really perhaps in many ways superior to it. Of course, it doesn’t deviate greatly from some core elements that have been a part of flight sim/combat games since some of the earliest entries to the genre. However, there are some nice additions and improvements to the classic formula of other such games to make it stand out on its own and out-fly the competition, though the main question to be asked is whether or not this second entry to the series out-flies the first. 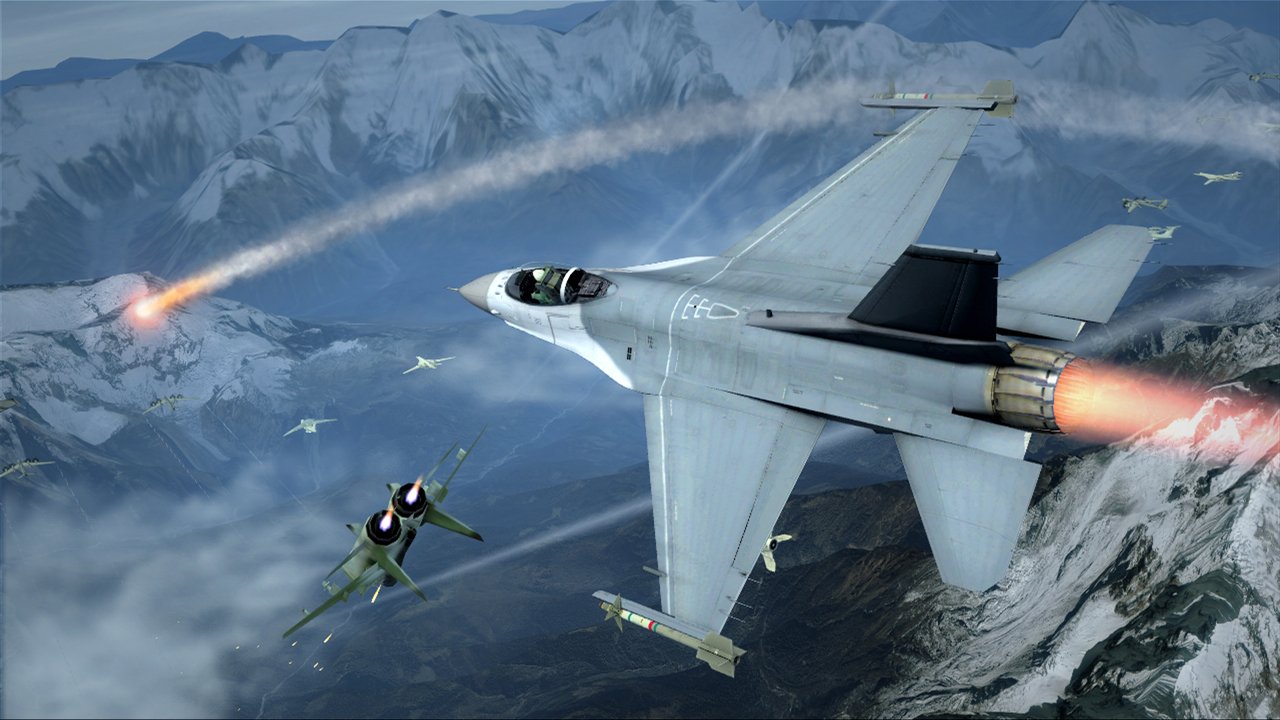 As far as the visuals go, there’s probably not much of a comparable difference between the first game in the series and this entry, with maybe the exception of the ground terrain and maps (created again using GeoEye satellite imagery), looking perhaps a little bit better than I remember it looking in the first game. Sound design is mostly pretty solid, as far as both the sound effects as well as the voice-overs are concerned. I feel though that the explosions and other such similar blasts should be maybe a bit louder or clearer, and also the cannon on a lot of the planes doesn’t always sound quite like I expect them to. I also kind of miss the more auditory cue that was given in the first game in regards to incoming missile attacks, though that is fairly well supplemented with a sort of “rear-view camera” that pops up in the upper-right corner of the screen during such incidents (which are quite frequent).

The gameplay and controls are in large part borrowed from the first entry as well, both favorably and to its detriment, depending on whether you’ve played the first HAWX game or not. There is some in-game tutorials and basic training to be found near the beginning of the main story mode, but the first game in the series did seem to be a little better about explaining the finer nuances of the controls, while this one tends to leave you oddly hanging at times, particularly when it comes to new elements such as mid-air refueling and landing your plane. Some of the gameplay aspects that also existed in the first installment, such as the “assistance off” mode (though more of an option, granted, in this game), are left for the player to decipher on their own.

The main single-player campaign feels much improved from the first game, with missions flowing more seamlessly into each other, not as sharply separated by distinctive breaks in the storyline, as the plot and your mission briefing are all more closely mixed together without really resorting to a mission details screen. The immersion is further improved by new gameplay addition such as taking off and landing your plane at the beginning and end of most every mission. A nice change of pace from the more traditional mission structure is also provided in the form of reconnaissance and the support of friendly ground units at times from a high-altitude spy plane or other such aerial units, which also helps to improve the story by making the player feel more involved in key elements of the plot. 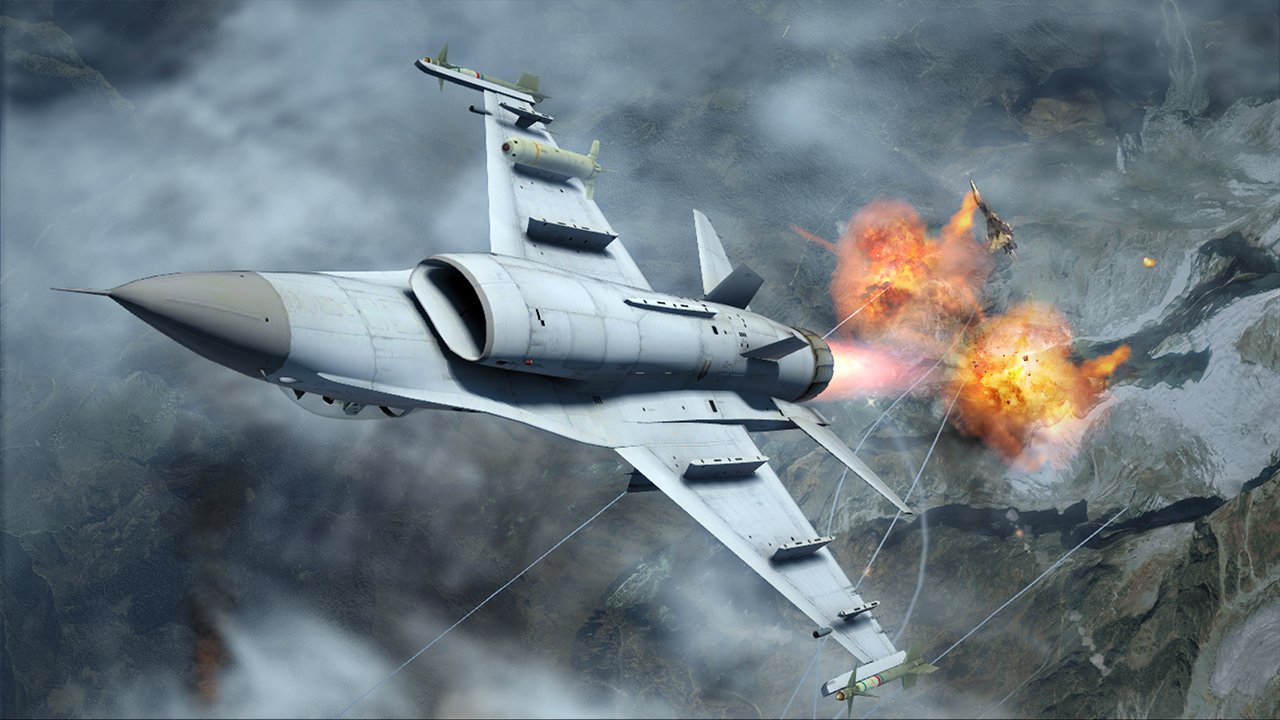 The story, overall, is an improvement from the first entry’s plot, which was okay for the most part, but, on occasion, had some rather silly or incredulous parts to it. Here, though there are I suppose still such moments to be found at times, the plot overall seems more well thought out, complex, and believable. This complexity to the story is helped in part by the switching around of perspectives on the ongoing crises by having the player control about three different main pilots throughout the course of the story.

Outside of the main story missions, the game provides a few other single-player modes as well, the majority of which can also be played cooperatively with one or two other people online. Arcade missions, for example, are essentially alternate and generally more challenging variations on the main single-player story missions, providing a new level of challenge to the game, while the Survival game type, (essentially a version of the “horde” mode seen in other games), puts your missile avoidance skills to the test as you strive to out-maneuver a steadily increasing number of enemies. There is also a “Free-Flight” mode, where you can take off and fly around without worrying about any kind of enemies or objectives, providing essentially a sort of practice mode for getting the hang of more harder-to-master skills such as landings and flying around in “assistance off” mode.

Mulitplayer modes include both cooperative versions of some of the single-player game types (as mentioned above) as well as competitive multiplayer matches. These matches are comprised of two teams of four players each battling it out in order to score the most points before the timer reaches zero. The team with the most points at the end of the match obviously wins, but also your own individual actions earns you experience points which can ultimately be used to purchase additional planes and upgrades to use in future combat scenarios (you can also earn XP from completing single-player missions, as well). 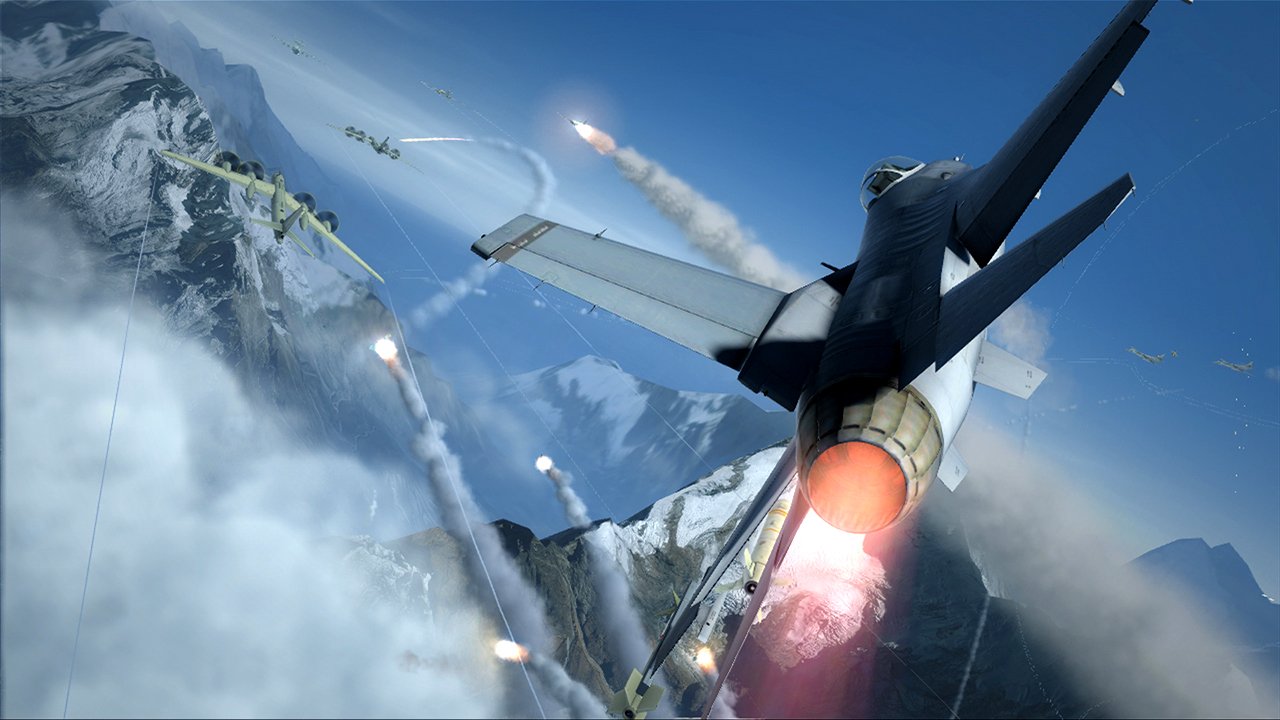 Overall, the game provides a really enjoyable experience, but I do have one major point of contention, almost really a sort of pet peeve of mine, that I feel is well worth making mention of, as it will possibly be a complaint that other gamers will make. You see, if you die a certain amount of times within a mission, a message pops up asking you if you’d like to reduce the difficulty setting. Game developers, please do not do this! It is a bit insulting, I’m afraid, and I know very few gamers who would upon being prompted so actually reduce the difficulty, unless I suppose if they suffer in general from low self-esteem where their gaming ability is concerned.

It’s one thing to be able to at will, on your own volition, opt to reduce the difficulty if a specific part of a game is particularly challenging, something I have done, in fact, for instance in the case of the final boss fight for Dante’s Inferno. Even so, the real problem here is first of all that it automatically highlights the option of reducing the difficulty when it presents you with this choice, as well as the fact that, if you do decide to reduce the difficulty level mid-mission, you have to start the current mission you are on from the very beginning, negating all of that mission’s checkpoints. I was on the final mission of the game, and had one last, very small and really fairly easy task to complete in order to be finished with the entire single-player story, when I goofed up and ended up crashing my plane, then began quickly tapping the A button to reload the checkpoint and finish the mission. Unfortunately, I didn’t realize until too late that the “change difficulty” prompting had popped up, which meant automatically that I had to redo the entire mission all over again!

Such a thing may seem a petty thing to complain about, and was really partly my own fault for not paying attention, but I’m afraid it did mar somewhat my enjoyment of the game overall, so I feel it is worth taking the time to mention. Still, overlooking this incident, and overlooking a few other minor complaints that I could make about the game if I nit-picked at it further, the game overall provides a very enjoyable experience, and I had a lot of fun playing it. Certainly, if you are a fan of flight sims and flight combat games, you should give this game a look, particularly if you’ve played the first Tom Clancy’s HAWX game, and found it to be to your liking.

Our ratings for HAWX 2 on Xbox 360 out of 100 (Ratings FAQ)
Presentation
85
The graphics and sound effects are nice, but not noticeably different, per se, from what was in the first entry to the series, outside of a few sound elements unfortunately non-existent.
Gameplay
81
There is a lot of fun to be had here, with a fair amount of variety and complexity utilized to enhance the experience. Some of the challenge of the game can get down-right frustrating.
Single Player
79
The storyline feels overall improved from the first entry, as well as the mission structure, but still some of the missions in this one fail at times to be as exciting as those found in the first entry.
Multiplayer
81
A fair amount of excitement here, to be sure, though overall it's pretty basic with no really uniquely defining features.
Performance
83
Smooth frame rate and controls for the most part, though I can't help feeling there might be a little bit better set-up possible, and a little bit of slow-down occurs during some of the cut-scenes.
Overall
79
If you're a fan of flight sims and flight combat games, then this is certainly an entry worth giving a try. Gamers new to the genre might want to start off with the original HAWX game first, though.