Amnesia shows you what fear is and continues to punish you while you tremble in the shadows. Containing oppressive settings and clever puzzles

Amnesia: The Dark Descent is a brilliant follow up game from Frictional Games after their successful Penumbra games. The mechanics feel similar to the Penumbra games albeit controlling the player more and displaying some truly oppressive and terrifying situations. You are Daniel and have just awoken in an ancient castle with no memory of what has happened. Exploring the castle in a first person view you find notes left by yourself telling you that you have taken an Amnesia potion to forget something terrible. The rest of the game will reveal what that terrible thing is and do it while scaring the hell out of you. Even in the darkness you will be solving a series of sensible puzzles linked by objects and messages scattered around the castle. Like the Penumbra games you use your cursor as a virtual hand to pickup objects and to open and close doors adding a bit more connection to the environment. Light plays an important role for stealth and maintaining Daniel’s sanity. 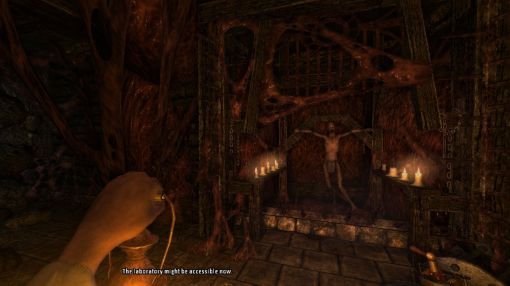 Light becomes central in the game as it is used for stealth, sanity and even a bit of navigation. Since the game is set in the 19th century you have a simple oil lantern to light your way. Oil is used as a power source, like batteries in Penumbra, so collecting it and making sure not to use the lantern in well lit areas is important. Tinder boxes can also be collected and they will allow you to light candles, torches and other stationary lights. Even though most items in Amnesia can be picked up, rotated and thrown around the candles are completely static. Once you get over the fact that you can’t just pick up a lit candle and walk with it you should settle nicely into the way light plays a part during the game. Stationary lights are placed around puzzle locations and along the lengthy dark corridors.
There are many stationary items to light along the way but not enough tinder boxes to light them all. Lighting ones you frequent is a good idea so is lighting ones that let you know where you have been. The lit flames will show you where you are in a maze of tunnels, and finding your way back through them is much less confusing with this simple system. I rarely ran out of light sources and only for a short time, I could find my way back following the lit torches like breadcrumbs. Staying out of the light reduces your sanity which results in all sorts of weird events like your vision blurring, voices and scratching in your head and even cockroaches crawling over your screen. It’s best to stay in the light if possible unless you are trying to hide. You’ll be trying to hide quite frequently because you are regularly in mortal danger from creatures groaning in the dark. 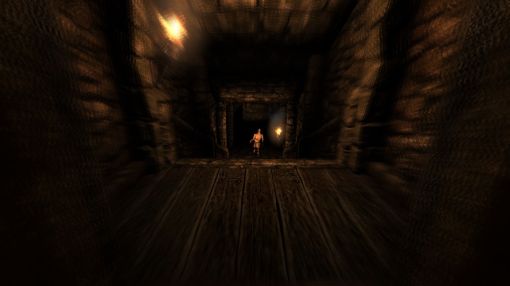 Servants are quick to maim any guests caught roaming the castle

Horror is one of the main strengths of Amnesia and it pulls it off better than any of the Penumbra games. More of the threats are now visible rather than simply being a series of sounds emanating from an unknown location. There is quite a lot of stealth required to avoid being detected by disfigured humanoid creatures that will stab first and ask questions later. The game slowly builds up the threat levels and gives you a suitable break when you’ve been inundated by ghastly figures for what seems like an eternity.
At the beginning of the game footsteps above you and doors closing may have you jumping. These non threatening ambient sounds occur too frequently though and you’ll likely become oblivious to them within the hour. Oblivious until the once harmless noises become a real visible hazard requiring you to run, hide or perhaps create a distraction. There are quite a few genuinely oppressive environments like the prison and torture chambers containing their share of well placed scares.
12Next 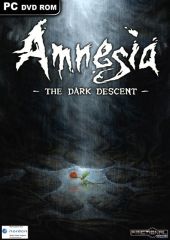 All videos for Amnesia: The Dark Descent (2)
Advertisement ▼