The shadow of the Grand Theft Auto franchise is certainly a foreboding and unforgiving place from which to win the attention of the often fickle gaming masses. The undeniable similarities between the two series’ subsequently results in the inevitable comparing and contrasting process, an outcome that could quite easily discredit a game like Saints Row 2 both unfairly and unjustly. Citing influence is one thing, but SR2 is certainly not aiming to settle for being labelled as a direct ‘clone’ of Rockstar’s centre stage attraction. In fact, the title is jam packed with weird, wonderful and distinctly unique features that make it one of the most entertaining and accessible sandboxers on the shelves. 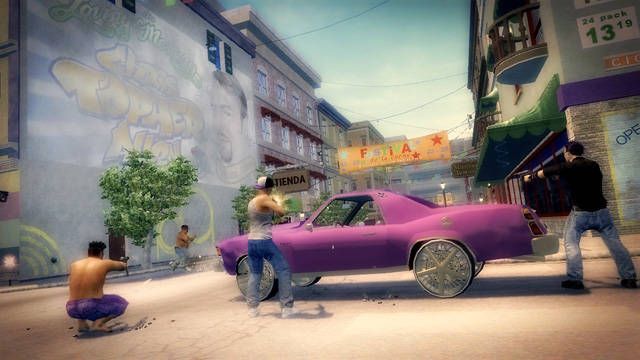 The fictional metropolis of Stilwater is once again the playground for the player to explore and eradicate, and the scale of the city is sufficient enough to avoid certain areas becoming overtly repetitive. Your primary objective is to break out of the Stilwater correctional facility after moulding your protagonist’s appearance and personality depending on your serious or comic persuasion. This could involve anything from a lean mean African American gangbanger to a morbidly obese, cockney transsexual.

The brilliantly in-depth customisation system that SR2 employs is in place throughout the city, and covers everything from car modding, crib renovation and gang style to personalised radio stations, tattoo parlours, clothing stores and perhaps the finest touch; the ability to completely reinvent your character’s features and attributes at a plastic surgeon. The result of the aforementioned is a real sense of connection with your character. As you’ve shaped him/her into the image of your choosing, the playing experience becomes a far more personal affair than attempting to forge a relationship with an otherwise mundane central figure. It’s highly likely that two separate players will twist and tweak the customisation options to such an extent that the overall feel of the game will differ greatly. Of course, there is a set storyline throughout meaning that that the actual plotline will always remain the same, however, depending on the age, race, gender or general outlandishness of your protagonist, the narrative will feel exclusive and unique in different individual playthroughs.

What makes SR2 so accessible is the recognition of its own brash ridiculousness. This is not a game that is promoting gritty realism; with the primary missions, activities/diversions and script all relayed with tongue firmly implanted in cheek. This sets the permanent tone for over- the- top riotous fun which makes up the core allure of the gameplay. The non-linearity of objective structure that we’ve come to expect from successful free roaming games is in place. In order to progress, you must defeat three rival gangs: The Sons of Samedi, The Ronin and The Brotherhood, but the order you choose do so is completely optional. A slight restriction is that in order to earn the right to play these missions you must gain respect via completing secondary tasks, however, when these involve spraying real estate with excrement, causing a trail of destruction on a flaming quad bike or the hilarious and brutal ‘Cops’ parody - ‘Fuzz’ (to mention only a few of the many distractions on offer), it’s a completely acceptable progression mechanic. 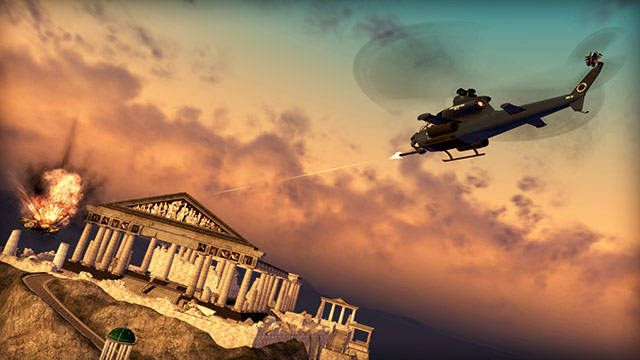 There’ll certainly be no awards for subtlety or sophistication here, SR2 relishes its brazen attitude with gusto; loud mouthed, wonderfully offensive and completely content to be so, ‘modesty’ is some way from even registering on the developers radar. The rise to the top of the criminal ladder and the eventual battle with the stereotypically evil ‘Ultor Corporation’ will certainly be an eventful ride. The main missions are packed with variety and explosive set-pieces. Storming a nuclear power-plant all guns blazing to retrieve a giga counter, mounted airborne assaults on rival gang’s drug factories or planting then detonating explosives before base jumping from the top floor of a skyscraper are some especially memorable missions from the non-stop highlight reel of the main campaign. Between the secondary activities, inevitable sandbox collectible run-around tasks and the main objectives, SR2 will never leave you disinterested or lacking in things to do. If a certain pursuit doesn’t take your fancy, simply drive to one which does and fire away. Some activities are admittedly more laborious than others but none should ever feel unplayable.

Volition Inc have also implemented the driving perfectly. Car handling and differing speed always feels unique depending on your vehicle of choice. The arcadey drift-like feel, each car’s overall sensitivity and ease of hand braking means that driving through Stilwater is for the most part a pleasure rather than a chore, and again, the vast catalogue of cars, vans, buses, boats and planes to hijack is in keeping with the rest of SR2’s diversity.

Because it’s the nature of sandbox titles to be so vast, expansive and ambitious, we often see technical prowess suffer as a result and in Saints Row 2 it regrettably does. In a game that prides itself on relentless action it’s often highly apparent that graphically, SR2 is labouring under the strain. Gang battles can often involve fifty plus enemies at once, the relentless gunfire and general chaotic nature of such encounters frequently leading to jarring slowdown as well as screen tearing issues. The basic run-and-gun combat system and erratic nature of opponents can easily turn mass brawls into cluttered, messy affairs where wild bullet spamming triumphs over tactical nous. In no way aiding these shortcomings is the poor AI throughout of both friend and foe. Rival gang members actions and intelligence would not look out of place in the San Andreas era and are essentially, though numerous, simply moronic, faceless cannon fodder. Frustrations can arise whilst riding shotgun with an NPC. On a couple of occasions whilst on a drug running missions (holding off waves of relentless enemies whilst the AI drives) the driving was so incompetent that the vehicle was actually destroyed and the mission failed as a result. When in such cases succeeding or failing is to an extent not in the player’s hands, it’s almost unforgiving, but thankfully these instances should very rarely occur and shouldn’t be too detrimental to the overall enjoyment factor. Suffice to say that tackling missions in co-op can all but vanquish these irritations. 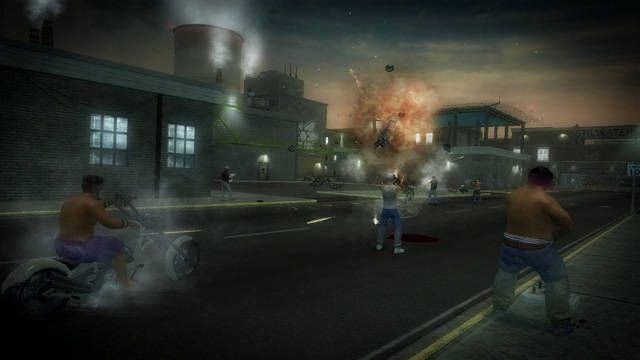 Many ambitious single player titles only offer multi player as a slapdash addition to the core content. Thankfully this isn’t the case with Saints Row 2. As well as separate co-op missions to the main campaign there’s a solid experience and rank based system for online play incorporating all the positives of single player. Starting off as a ‘New Jack’ with distinctly shabby apparel, you’ll be tasked with ascending the leaderboards via upgrading in rank subject to in-game performance. Before long your dilapidated looking hoodlum will cut a far more respectable and ‘pimped out’ figure, or alternatively completely madcap one if you so please. Besides the basic Gangsta Brawl (deathmatch/team deathmatch) mode, the real substance of multiplayer is in ‘Strongarm’ matches.

Essentially taking side activities from the main game and dividing them up into zones, these confrontations are absurd affairs, yet also amusing and highly entertaining. For example, the point scoring zone will be highlighted on the individual and/or the team’s mini-map and the activity in question is announced, say ‘Mayhem’ (general destruction based carnage to generate the most currency), players will then surge in and begin the proverbial annihilation with the underlying aim of earning the highest amount of cash. Games are made up of four separate rounds divided into differing activities resulting in adrenaline fuelled and diverse match-ups. What’s so appealing to SR2’s multiplayer, much like the single player, is the ever present emphasis on fun. Too many online experiences are intimidating and often unaccepting places to find yourself in, but here that notion is certainly invalid. SR2 online is inviting, openly accessible and will provide many hours of hi-jinks and hilarity long after Ultor has eventually been been bought to its knees.

Saints Row 2 does have some glaring technical issues, but the charm, character and easily understated individuality of the game mean that its initially frustrating elements can soon be forgiven. Staunch GTA followers may still be unwilling to embrace another free roaming crime spree but they’d be foolishly overlooking what is a wonderfully customisable toy-filled sandbox in its own right. Let’s face facts; what other game could you dress up in a giant hot-dog costume and go on a murderous rampage, whilst belting out Karma Chameleon at maximum volume?

Our ratings for Saints Row 2 on Xbox 360 out of 100 (Ratings FAQ)
Presentation
83
SR2 is outrageous and entertaining with a colourful cast, genuinely funny script and a great soundtrack. Stilwater may not have quite the same allure as other sandbox environments but it plays host well to the no-holds-barred mayhem.
Gameplay
83
Whilst combat is a clumsy affair, once you accept its limitations the arsenal of weaponry is a riot to experiment with. Vehicles handle diversely and satisfyingly and the game's free roaming structure and open ended task choices means great fun.
Single Player
87
Gangs, guns, cars, cribs and in depth customization. SR2's main campaign is where the bulk of the thrills lies whilst the diversions and activities on offer are also entertaining and not simply thrown in to beef up longevity.
Multiplayer
82
Rather than a tacked on addition the multiplayer is both fun and addictive. Highly accessible rather than foreboding, there's plenty on offer after the single player game has been fully experienced.
Performance
65
Where the game unfortunately really suffers. Ropey visuals, slow down, frame rate and screen tearing issues are not complimented by the often woeful AI.
Overall
82
It has its faults, but Saints Row 2 is not simply the Grand Theft Auto clone that the ill-informed gamer could well label it. Look past the technical shortcomings and SR2 offers a really funny, entertaining and individual playing experience. 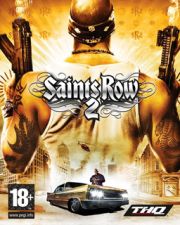