Still FEAR at the core but without the scare factor or punch of the original.

F.E.A.R. 2 is a decent shooter, unfortunately not quite as good as the original. Certainly it does some things a little better, and in many cases it’s simply a refinement of the existing formula but it needed to do more to have the same impact as the original. The combat and the AI are both fairly good but there simply aren’t enough shocks or psychological scares for it to uphold the F.E.A.R. name. Overall the pacing is good and at times excellent but the game is too short for a predominately single player title coming in at about six hours, one less than the original.
One of the biggest areas of improvement for F.E.A.R. 2 over the original is the open level design, even early on there will be many side rooms and alternate ways to circle around or approach enemies positioned further on. Some of these rooms will contain goodies or extra intelligence that may reveal more about past or future events, others may contain additional yet brief scares. Thankfully the enemy AI uses these as well, coming at you from behind or ducking in and back out of these side rooms. The levels themselves are also more detailed, with more objects and architectural features. They don’t seem to have a big impact on the combat, although you and the AI can tip over cover, the world doesn’t feel as crowded as perhaps it should when in combat, possibly because the actual combat sequences are generally short and don’t persist in one room for long enough. Links across levels present more detail, for example a plane that is seen crashing early on will be in one of the next levels which helps keep the levels within some real environment rather than just producing individual level one after another.
The Artificial Intelligence is still very capable, in particular the combination of animation and AI routines works quite well. Replica soldiers will duck under pipes and limp around behind cover, they do appear more patient waiting for you to make a move than risking an assault. Thankfully they will continue with their catchphrases when you engage slow motion “he’s too fast” or “that’s impossible” help make some of the action a little more fun. They do not appear to talk to each other as much as the original which makes the combat a bit less interesting. One perceivable negative for the AI is that on Normal the game is far too easy, even attempting to go out from cover against multiple enemies usually results in little more than a scratch especially with slow-motion at your disposal. A few times I turned around to face a replica soldier with a shotgun at my back, which would have easily spelled death if the original’s difficulty was used. I think I died more from environment traps like electricity and fire than in any complex combat situations.
In terms of gameplay the weapons are adequate but I think they needed more work in terms of balance. The assault rifle is incredibly good at long and short ranges and there was an excessive amount of ammo for it which means even if you don’t like it you’ll probably use it a lot anyway. The other weapons seemed to lack some real punch in general situations. The sniper rifle perhaps the exception, although it’s long reload time became a nuisance it still punches through guys with ease, effectively replacing the particle cannon. Of course the gore is well and truly back, enemies still explode into mists of blood, they lose limbs and torso sections depending on the ordinance used, again more gore could have been reserved for scare sections in order to mess with the player’s minds. The scare sections themselves are leapfrogged a little too obviously between action segments which again reduces the scare factor. Add this with the easy nature of the game and it loses much of the tension of the first. I think nearly every ladder I descended down in the last half of the game I was praying for them to surprise me with a F.E.A.R. 1 like scare, only to be disappointed. Even the “ghost” type enemies pale in comparison to the original onslaught. The scariest parts for me were during the first few levels with some very basic scares that weren’t really used at all during the later parts. 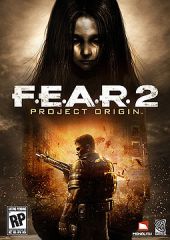 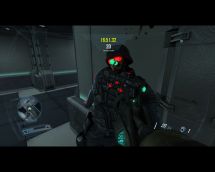