Soulcalibur IV is the sixth entry in Namco Bandai’s Soul series. This series of fighting games started as an arcade game in 1996 with Soul Edge, but since then has released on consoles such as all the PlayStations, both Xboxes, and the Wii. Soulcalibur IV is available for the Playstation 3 and Xbox 360.

Soulcalibur IV doesn’t have just one storyline. The storyline you participate in greatly depends on which character you play since the story is different for each character. Each story centers around two powerful blades called Soul Edge and Soulcalibur. 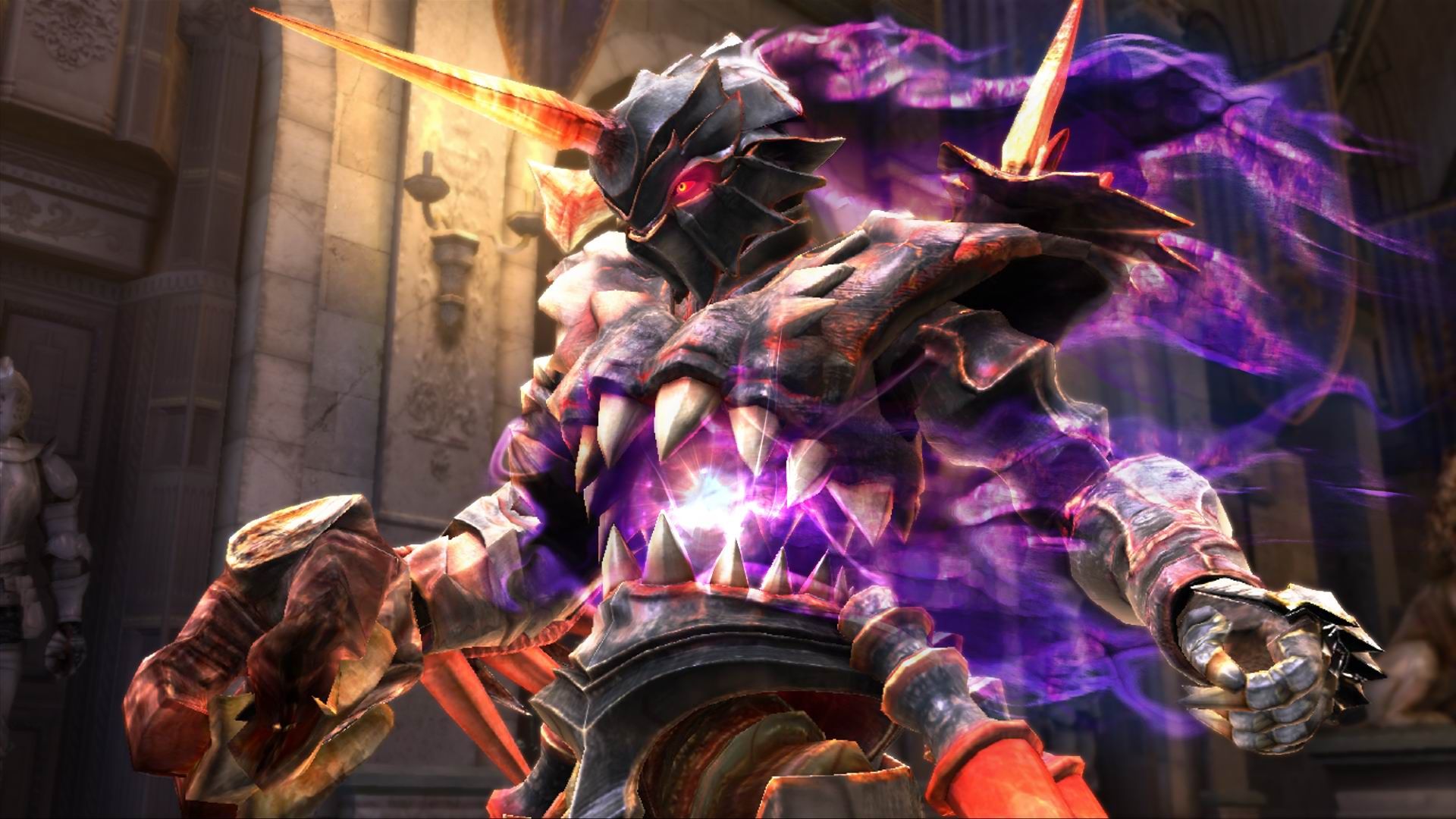 This game has a lot to offer both to fans of the series and to newcomers. Each character has their own unique story mode to play through (and there are over 30 playable characters). There’s an arcade mode for multiplayer, a training mode that allows you to view a list of all the combos you can pull with characters to hone your skills, a character creation mode (where you can create a playable character from scratch) which is very in depth, an elimination mode called Tower of Lost Souls in which you play certain challenges until you are defeated and gain rewards according to how far you get, and there’s also a museum mode full of pictures and other multimedia to unlock.

As mentioned, the storyline changes depending on which character you choose to play as. Their stories aren’t that long though and you’ll play through a scenario within a matter of minutes; this fact gives you further incentive to play through with other characters or choose a harder difficulty mode.

You aren’t just limited to stock characters either; you can fully create your own character from scratch. You can change their facial features, gender, body size, what weapons they use, what armor or clothes they wear, and you can even change the tone of their voice.

The combat plays much like previous Soulcalibur games: a platformed fighting game where you use an assortment of combos and martial arts to take down the life total of the other player. However, there’s an interesting new twist on the battle modes. If you were given the chance to choose a reserve character before the battle, then you are able to switch, in battle, between characters. Therefore, if you get matched up with a character that has an advantage over your first character, then you can instantly switch to your second choice character which may not have that same weakness to your opponent. This helps to change things up a bit. 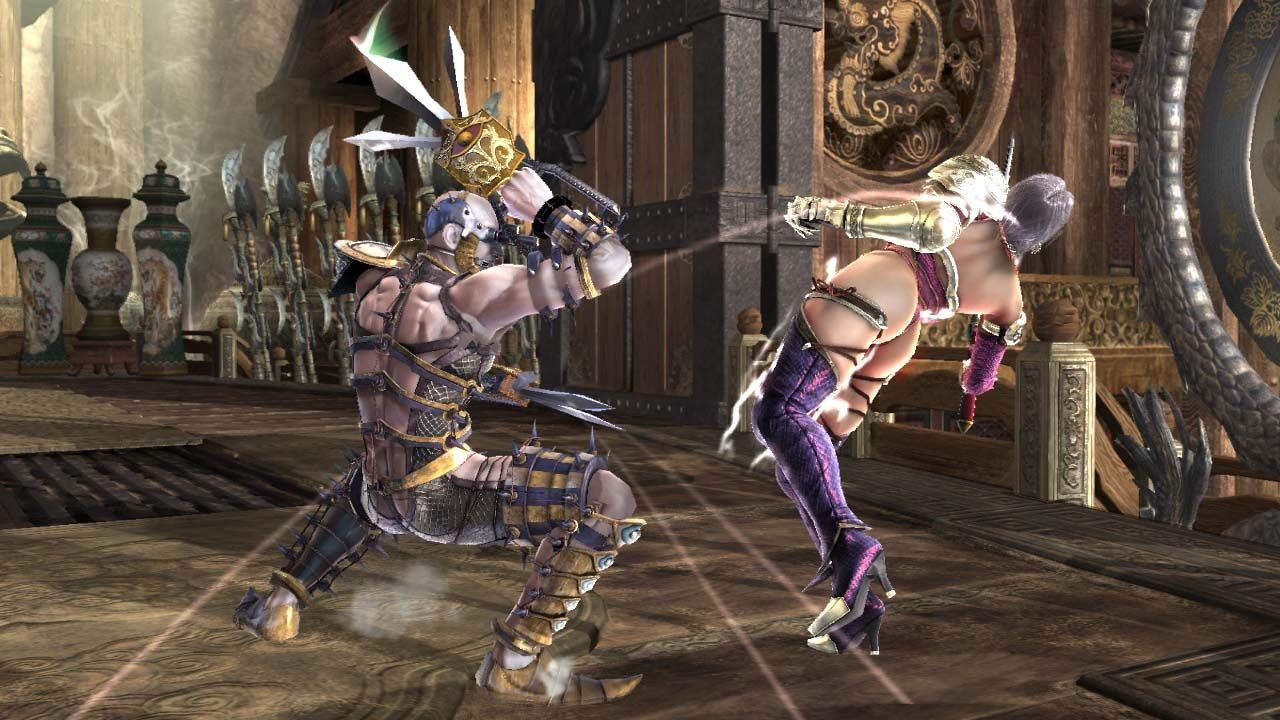 The AI in Soulcalibur IV is similar to past games. The computer randomly uses different sets of moves or combos and speeds up or uses more complex combos depending on what difficulty you set them to play at. The bosses generally have very powerful attacks and unique attributes such as not being able to get ringed-out, having two bars of health instead of one, or whatever it may be. When fighting these bosses on a difficult setting, it may take a few, if not many, tries to defeat them but that’s what difficulty settings are there for.

The multiplayer offline mode is very fun if you have a buddy that is equally into Soulcalibur. If not, there is no chance a non-Soulcalibur gamer will be able to win. Button mashing combos in this Soulcalibur version doesn’t work as well since the combos have become more technical compared to previous Soulcalibur games. Matching up someone who has played the game any length of time versus someone who hasn’t will result in the noob saying, “Let’s play something else,” after a few matches. However, if you can’t throw matches every now and then, there’s a second option with multiplayer. Soulcalibur IV has an online mode that allows you to get matched up with other Soulcalibur fanatics. Here you’ll be able to pound others in multiplayer mode over and over again. Most fighter games have the reputation of having great replay value and Soulcalibur IV is no exception to that trend. If you enjoy this game, there is a great chance that you’ll be playing it for a very long time.

An interesting point about this game is the fact that you can actually skill up your characters, giving Soulcalibur IV an almost RPG type feel. After completing a character’s story mode or after winning other battles from other types of game modes, you’ll acquire both money and sometimes unlock other add-ons, such as additional levels or characters. The money you acquire can be spent on various things in the game, but is mainly spent on upgrading your character's equipment. You can increase different attributes depending on what type of gear you give them and if you choose to play “Special Versus” mode, this gear will influence the battle greatly. 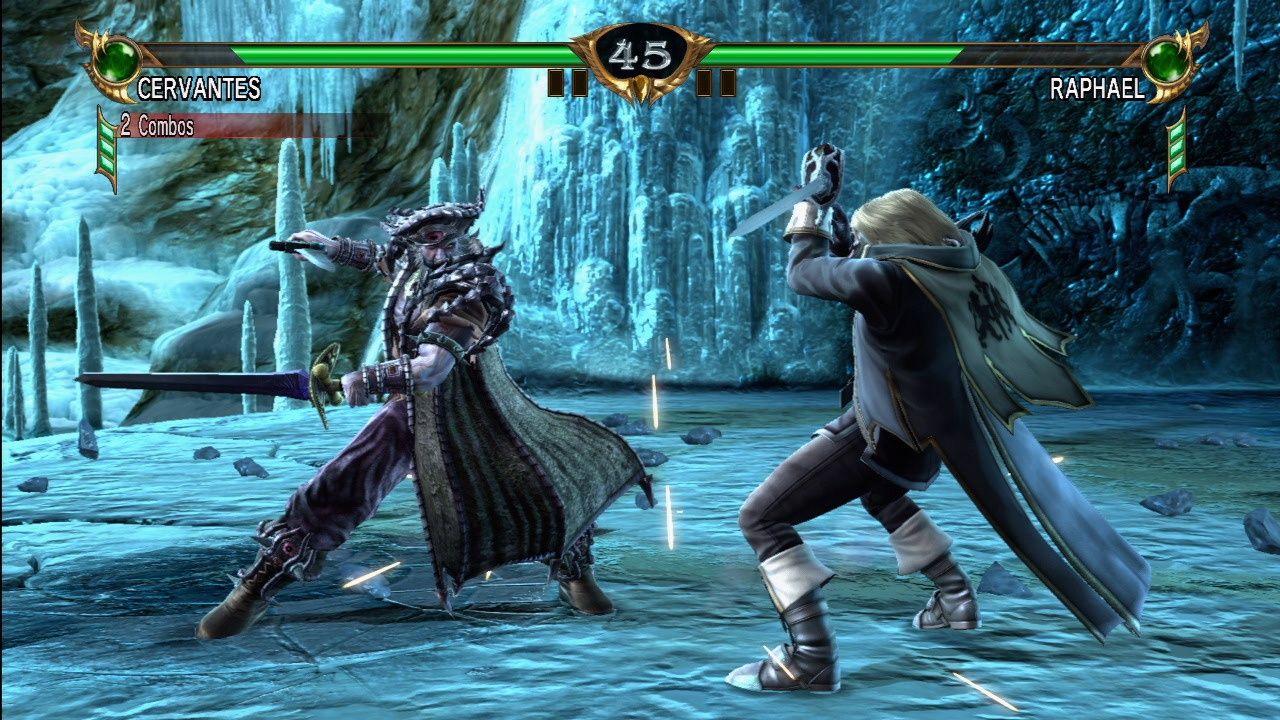 Once again Namco Bandai has updated Soulcalibur’s graphics and created new and beautifully crafted fight arenas. Detail to lighting, shadows, surrounding wildlife and architecture allows you to really appreciate each stage you fight on. There are also enough levels so that the scene doesn’t get repetitive.

Although the music is great, dialog has always sounded a bit off for the different characters of the Soulcalibur series. Most of the time instead of the dialog giving the characters meaning, it ends up making you laugh and shout these odd-ball phrases at your friends randomly. Soulcalibur IV is better than any previous Soulcalibur in the series at making character phrases sound more like they were written for an English audience, rather than simple Japanese dubs, but they're still laughable at times.

Next to the dialog itself, is the issue of voice acting. Either this is where Namco Bandai was forced to make budget cuts, or they aim to make their customers laugh at how ridiculous the game characters sound with their assortment of squealy yelps and over dramatized insults and retorts.

Of all the fighter games out there currently, Soulcalibur IV probably has the most intricate equipment, weapon, and bodily figure detail. All of these aspects can be modified and changed in the character creation mode. The graphics of this game, from the detailed arenas to the characters themselves, are hard to match. Compared to most fighter games, this one definitely stands out and delivers an interesting and new experience, even for hardcore Soulcalibur veterans.

Our ratings for Soulcalibur IV on Xbox 360 out of 100 (Ratings FAQ)
Presentation
90
The visuals, music, and game mode navigation are really great. For a fighting game, they're some of the best in the genre. The two things found lacking here is the dialog and voice acting.
Gameplay
85
With a list of combos and single powerhouse attack moves longer than probably possible to master, Soul Calibur IV provides the player a unique way to play each character. The AI is unpredictable enough to help make single player mode fun and interesting.
Single Player
85
The variety of single player modes will keep players engaged for quite some time. Some modes are a new addition to the Soul Calibur titles and will change things up even for veterans of the series.
Multiplayer
65
Many players (both offline and online) may tend to master only the most annoying moves and spam them, leaving you in the air, unable to retaliate the whole fight. How can you solve this problem? Do those same moves to the other guy first.
Performance
80
The only time spent waiting is on the loading screen before the battle. Other than that, the game doesn't lag at all and plays very smooth. The awesome graphics help to make that smoothness appreciated.
Overall
85
Soulcalibur IV offers a highly compelling fighting experience, especially for fans of the genre. 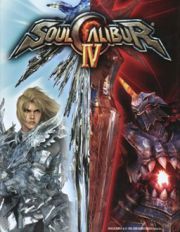 Our Review of Soulcalibur IV
85%
Great
The Verdict:
"An epic fighter game with a whole lot of character customization options and game modes"
Game Ranking
Soulcalibur IV is ranked #151 out of 1574 total reviewed games. It is ranked #9 out of 33 games reviewed in 2008.
150. Mortal Kombat
Xbox 360
151. Soulcalibur IV